How the world's most notorious terrorist just launched an obscure left-wing American author into bestseller stardom. 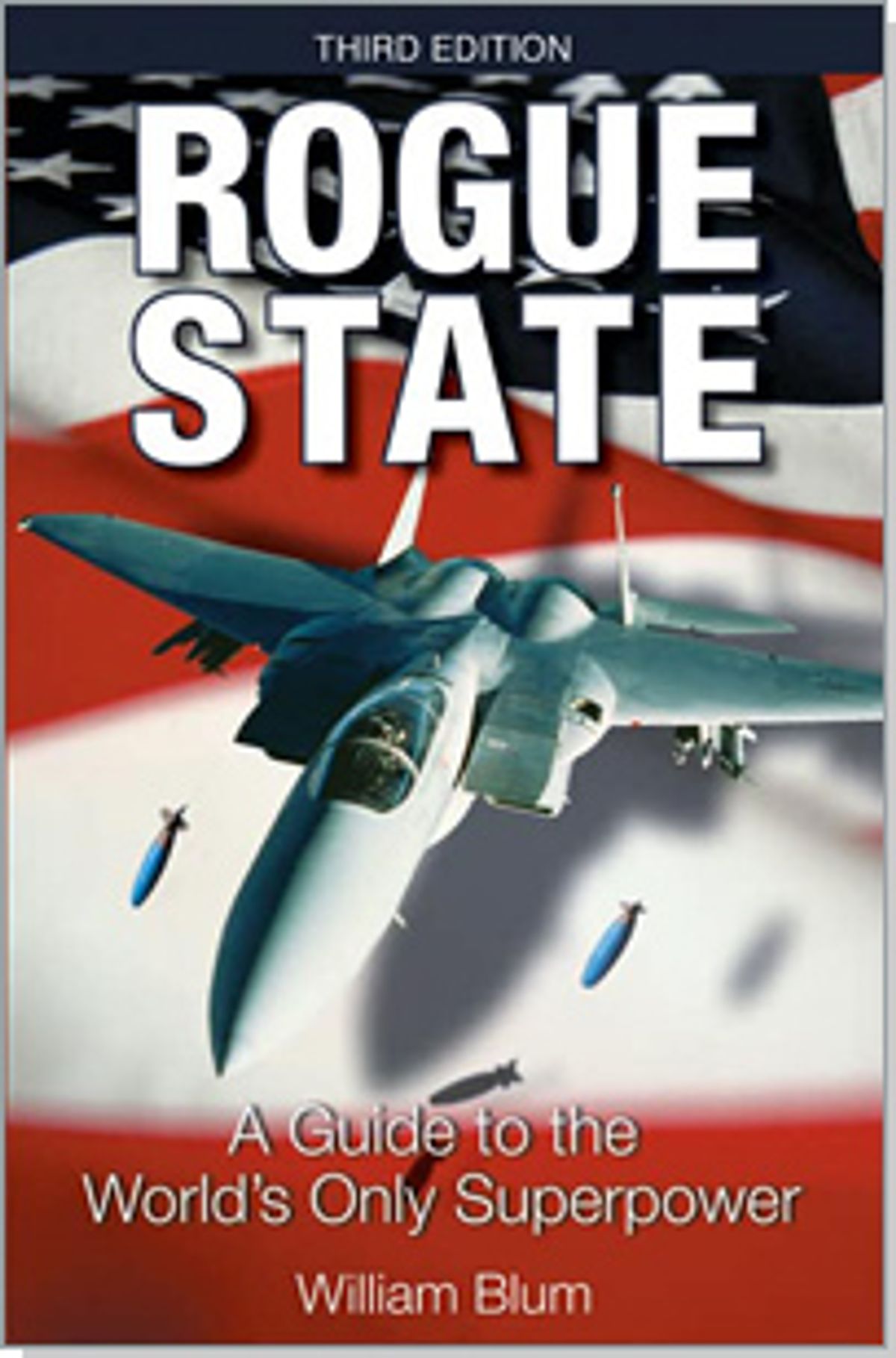 Watch out, Oprah Winfrey, Osama bin Laden has jumped into the book-promotion game.

On Wednesday, the 72-year-old Washington author William Blum existed only on the fringes of the publishing industry. His 2000 foreign-policy diatribe, "Rogue State: A Guide to the World's Only Superpower," ranked No. 205,763 on Amazon's bestseller list. His byline rarely appeared in print, he says, because even left-leaning journals like the Nation often found his views too radical.

But then the world's No. 1 newsmaker, bin Laden, showed up Thursday on the Al-Jazeera network to promise another terrorist attack on America, ask President Bush to withdraw American troops -- and plug Blum's book. "If Bush decides to carry on with his lies and oppression," the reclusive terrorist announced, in an audio message bounced to a potential audience of billions, "it would be useful for you to read the book 'Rogue State'."

By Friday morning, "Rogue State" was ranked No. 35 on Amazon, just behind Harry Potter and just ahead of Strunk & White. At home, in his small Connecticut Avenue apartment, Blum was delighted to learn from a reporter news about his newfound profitability. "Oh my God," the author exclaimed, wearing his morning slippers as he scribbled the Amazon statistics on a pad of paper. "I must tell my publisher."

It was the latest shocker in a two-day whirlwind for Blum, a former State Department employee whose ideological views fall somewhere between those of Noam Chomsky and Ramsey Clark. A simple, earnest man, with a grandfather beard and gold-rimmed glasses, he is used to the quiet life, working at his computer on his e-newsletter, the Anti-Empire Report, and taking walks in the neighborhood. But he did not sleep much Thursday night, following a trio of last-minute television appearances on CNN, ABC News and MSNBC. "Are you familiar with MSNBC? Is that on the Internet?" he asked, his antenna-only television sitting a few feet away. "If one has cable one can get that?"

Then the phone rang. It was a producer for National Public Radio, who wanted to book him on a show. The Times of London and the New York Post had called minutes earlier. Then Christopher Dickey, of Newsweek, was on the line from Paris. A moment later, a reporter for the Washington Post style section. "That's the Washington Post," Blum said, after hanging up the phone. "They will not print any of my letters ever, but now they are sending over a man to interview me." The phone rang again. The Post wanted to send a photographer. "Oh boy," said Blum, who wore a loose-fitting plaid shirt. "This is very new. I have a very fixed daily routine of taking care of my e-mail, and my e-mail has ballooned beyond my control."

It's easy enough to see why bin Laden chose Blum -- despite the fact that Blum grew up in Brooklyn, N.Y., the child of Jewish immigrants from Poland. In the first line of "Rogue State," Blum writes, "Washington's war on terrorism is as doomed to failure as its war on drugs has been." This fits securely into the singular theme that Blum has pursued through four books. "The U.S. government does not mean well. It doesn't care whether it does good or bad," he explained. "The second lesson is that anti-American terrorists are not motivated at all by things cultural. It's what we do. It's American foreign policy."

Over the years, Blum's books have been translated into 15 different languages, including Chinese, Korean, Greek, Finnish, Spanish and two Arabic editions. They are all displayed on one of the many bookshelves in his small living room, a converted office otherwise decorated with the detritus of an activist's life: A dollar bill with President Bush's face and the words "The United States of Aggression"; a Project Censored award; and a lapel pin that says, "Gay Whales Against Racism." He admits, "I am not very p.c."

He arrived in Washington in the 1960s, an avowed anti-communist with dreams of joining the Foreign Service. But his State Department career was cut short after he became a leader in the local protests against the Vietnam War. He later founded a short-lived alternative magazine called the Washington Free Press, which he admits in retrospect was not Pulitzer quality. "The others thought that editing was bourgeois," he said. The Free Press folded in 1970, and Blum began traveling the world, living in Chile during the presidency of Salvador Allende, in Germany and in England. His wife, whom he is separated from, still lives in Germany with their 24-year-old son. He published his first book in 1986, "The CIA: A Forgotten History," which received back-cover blurbs from Gore Vidal and Oliver Stone.

As for his newest booster, Blum offers no apologies. "The people who have interviewed me in the last few days, they keep pressing me to say how repulsed I am to get a plug from Osama bin Laden. I am not repulsed." That is not to say he has any sympathy for bin Laden's brand of violence or religious extremism, only that he is not surprised that bin Laden agrees with his writing. "I hate any kind of religious fundamentalism," he says. He did not support U.S. military actions in Afghanistan or Iraq, but he says he would hate to see bin Laden and his crew in charge of either country. "The oppression of women," he says. "The whole thing turns me off."

"Rogue State" was originally published before the attacks of Sept. 11. Bin Laden, perhaps lacking a fact-checking department or easy access to a library, actually never quoted from that book. In his audio message, he used words from one of Blum's later works, "Freeing the World to Death." The inaccurate citation doesn't bother Blum, who stands behind the writing that caught bin Laden's eye: "If I were the president, I could stop terrorist attacks against the United States in a few days. Permanently," reads the section quoted in part by the world's most notorious terrorist. "I would first apologize to all the widows and orphans, the tortured and impoverished, and all the many millions of other victims of American imperialism." In that passage, Blum goes on to explain that he would end American support for Israel and reduce the military budget by 90 percent. "That's what I'd do on my first three days in the White House," Blum writes. "On the fourth day, I'd be assassinated."

Who would assassinate him? Blum smiled at the question. Standing at the center of an international media swarm, he raised his arms and extended his forefingers to pantomime quotation marks. He paused for dramatic effect.