Rove: It's the (eternal) war, stupid!

In his first speech in two months, "Bush's brain" laid out his plan for GOP victory: War, war and more war. 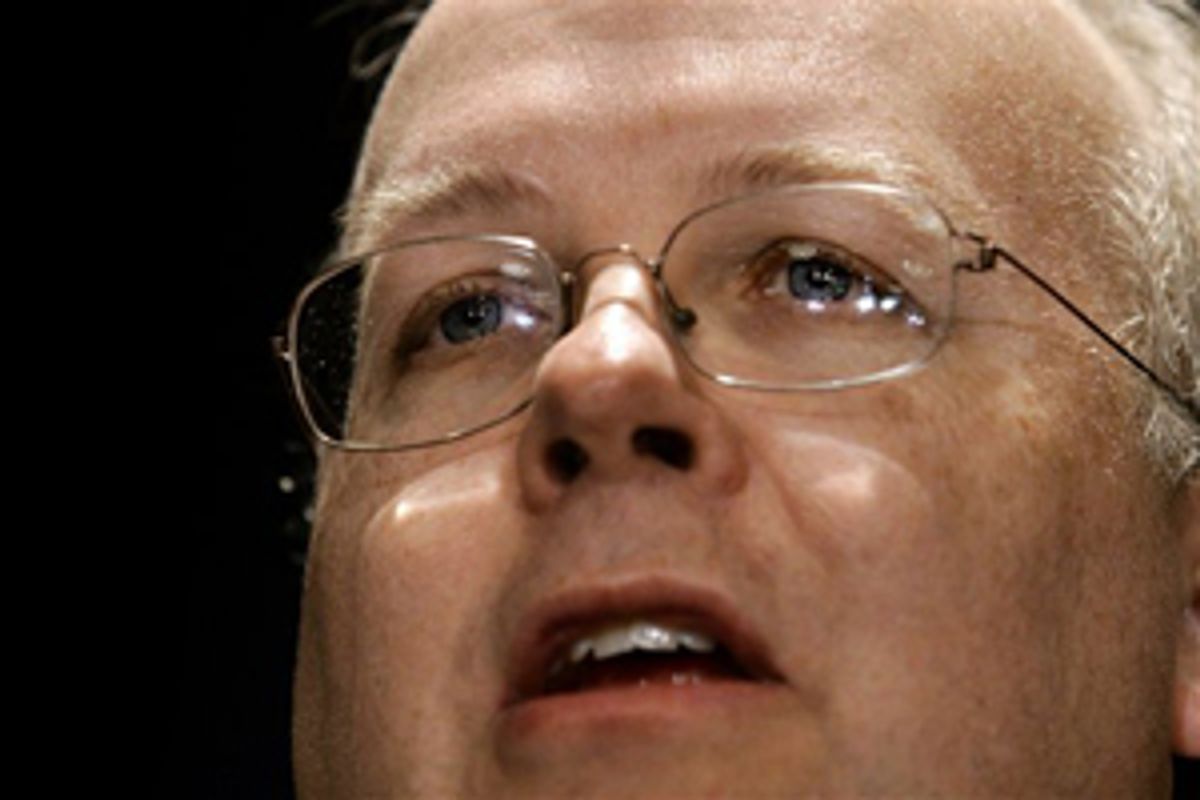 It was Karl Rove's first public speech in two months. But there were no dramatic cries of "He's back -- our long national nightmare is over!" when the recently reclusive White House political guru appeared Friday before several hundred members of the Republican National Committee.

While Rove is still dancing under a legal cloud in the ongoing CIA leak investigation, he radiated no visible signs of distress. A lesser man might have been daunted not only by fears of a possible indictment by special prosecutor Patrick Fitzgerald, but also by worries that the woeful 27 percent approval rate (the Gallup Poll) for the Republican Congress presages a GOP rout in November.

By the standards of Washington soap opera, Rove's luncheon address offered the kind of melodrama that only C-SPAN could love. But taken together with a morning speech by RNC chairman Ken Mehlman, this rhetorical onslaught offered intriguing clues about where the Republican high command wants to position the party for the congressional elections. Both Rove and Mehlman were playing to their base -- the state chairmen and elephant-pin-wearing local stalwarts who constitute the pachyderm heart of the Republican Party.

The two speeches, which were only intermittently interrupted by applause, should not be parsed the same way as a George W. Bush campaign appearance or an interview session on a Sunday talk show. For despite the TV cameras hoping for Rovian pyrotechnics and the three dozen political reporters missing the campaign season, the true audience for these low-key talks were the political professionals in the room and not the unwashed mass of voters at home. What Rove and Mehlman offered could have been billed as "Talking Points to Give to Your Candidates."

Rove, in particular, honed his message down to three big themes -- national security ("America is at war"), the economy ("We're heading into 2006 with a full head of steam") and the courts ("Two extraordinary judges: John Roberts and Samuel Alito"). As a result, the speech was like the dog that didn't bark in the Sherlock Holmes story.

The most important clues were found in the topics that Rove neglected to mention. No reference was made to Social Security (remember the Bush privatization plan that was designed as the centerpiece of the second term?), health care (anyone want a flawed prescription-drug program?) or energy (didn't our future depend on Arctic drilling?). The advisor once called "Bush's brain" also took a Pasadena on congressional reform, though Mehlman did declare in his best I-hate-lobbyists indignation, "If Republicans are guilty of illegal or inappropriate behavior, they should pay the price and suffer the consequences."

What Rove underscored in his stripped-down presentation was the degree to which the White House is gearing up for another "He Protected Us Against Osama bin Laden Even If We Can't Find Him" election. For terrorism remains the most potent political argument for reelecting a Republican Congress. Iraq may be a quagmire, but Rove and Co. are stuck with it. That is why Democratic critics will constantly hear variants of Rove's assertion, "To retreat before victory has been won would be a reckless act -- and the president and our party will not allow it."

Rove and Mehlman seized on the attacks on the National Security Agency's outside-the-law eavesdropping with such zest that it was clear that they regarded the leak of the story to the New York Times as a political plus for the president. (Note to the blogosphere: I am not a conspiracy theorist suggesting that the Republicans are the leakers in this case.) As Rove put it, "President Bush believes if al-Qaida is calling somebody in America, it is in our national-security interest to know who they're calling and why. Some important Democrats clearly disagree. This is an issue worthy of a public debate." The message for the congressional Democrats from this ought to be that the Republicans are going to attack them as weaklings no matter what they do, so instead of rolling over and bleating "We love warrantless wiretapping too," they ought to go down fighting.

Yes, Rove also talked about the economy (message: the tax cuts worked) and the Supreme Court (message: our say-nothing nomination strategy worked). But a Republican running for reelection promising tax cuts is as boring to the voters as a Democrat vowing to protect every hair on the graying head of the Social Security program. And while getting Roberts and (soon) Alito on the Supreme Court represents a major triumph for Bush, this sweeping victory also makes it nearly impossible for the GOP to rail against the so-called liberal Supreme Court in the 2006 elections.

Other presidents, particularly Bill Clinton, needed the Permanent Campaign to sustain them politically. As Rove demonstrated Friday in his first out-from-hiding speech since November, Bush and the Republicans are banking everything politically on the Permanent War.