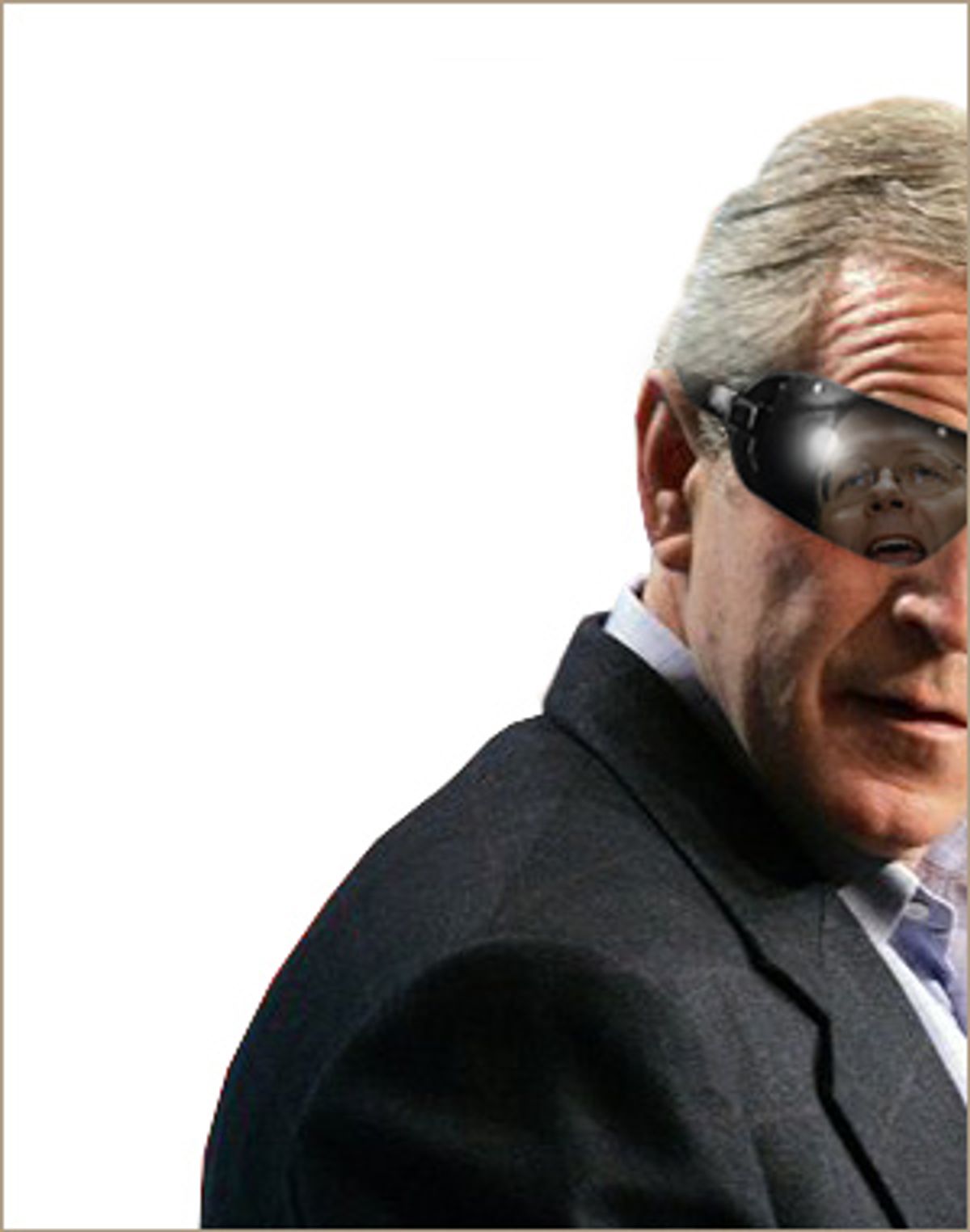 In a curious juxtaposition, leading figures from the Bush administration have recently argued that the president is either omniscient or blind.

Karl Rove, Bush's political "architect" and deputy chief of staff, expert at arranging the smearing of the motives and patriotism of the president's critics, offered the first proposition. Indeed, he remains under investigation by the special prosecutor for his potentially criminal involvement in the disclosure of an undercover CIA operative in order to tarnish the reputation of her husband, former ambassador Joseph Wilson, who revealed that the rationale for the Iraq war was based on false evidence. Every day for the past two weeks, White House press secretary Scott McClellan has stonewalled questions about Bush's and Rove's connections to super-lobbyist Jack Abramoff, who has pleaded guilty to fraud and bribery and is cooperating with prosecutors. McClellan refuses to name the officials who attended "staff-level meetings" with Abramoff.

Under these clouds, Rove stepped to the lectern at the gathering of the Republican National Committee in Washington on Jan. 20 to invoke the specter of Sept. 11. Little else matters but that Bush grasps that it changed everything and that Democrats of course do not. "We need," Rove said, "a commander in chief and a Congress who understand the nature of the threat and the gravity of the moment America finds itself in."

As Rove spoke, L. Paul Bremer III, the former presidential proconsul in Iraq and head of the Provisional Coalition Authority, had begun his rounds of media interviews to promote his memoir, "My Year in Iraq." "We really didn't see the insurgency coming," Bremer told NBC News. He also disclosed that he had argued for more troops but had been rebuffed by Secretary of Defense Donald Rumsfeld.

Rove's call to the faithful lacks the specificity of Bremer's confessions. For the political theme to remain vital recent history must be obliterated; the image must prevail over the record. And for the moment, Rove appears not as the citizen under suspicion but as the cardinal of the Sacred Congregation de Propaganda Fide.

The flaw with Bremer's apologia is that it too is challenged by the facts. In January 2003, Larry C. Johnson, a longtime CIA operative who was deputy director in the State Department's Office of Counter-Terrorism, where he served with Bremer, sent him a memo that accurately predicted an Iraqi uprising against the occupying forces, "no matter how benign or charitable," and the influence in Iraq of a "belligerent" Iran. "Bremer's reaction," Johnson told me, "was that this was off base, doesn't matter, we're going to war, don't undermine the effort. His mind was made up. There was no brooking any alternative analysis. This is the doctrine, the truth, either you admit to it or you're a heretic." When Bremer was appointed head of the CPA, Johnson tried to put him in touch with intelligence experts to brief him with information that the Bush administration had not considered, but Bremer did not "want to listen."

Bremer was modeling himself on his commander in chief. In fact, elder statesmen of the foreign policy establishment and the Republican Party repeatedly warned President Bush to his face of precisely the consequences of his planned actions. Former National Security Advisor Brent Scowcroft and former Secretaries of State James Baker and Lawrence Eagleburger, among others, "never thought the war would come off right," one of those who spoke to Bush told me. "We all felt that strongly. It was going to end with an Islamic republic dominated by Shia and influenced by Iran. There was no question they would have Iranian connections. If you know history, you don't have to be a genius." But Bush would not listen. "It's a sad story."

On the ruins, Rove once again is playing the patriot game to salvage Bush's short-term political position. This time he is attempting to turn Bush's warrantless domestic spying, contrary to the Foreign Intelligence Surveillance Act, into a false issue of whether Democrats support gathering intelligence on terrorists. Faith now demands dispensing with the law. The history of the Bush presidency underlines Rove's premise, but not as he wishes: "We need a commander in chief and a Congress who understand the nature of the threat and the gravity of the moment America finds itself in."