This trite movie about a working-class kid with big dreams is no winner, but you can't help rooting for it anyway. 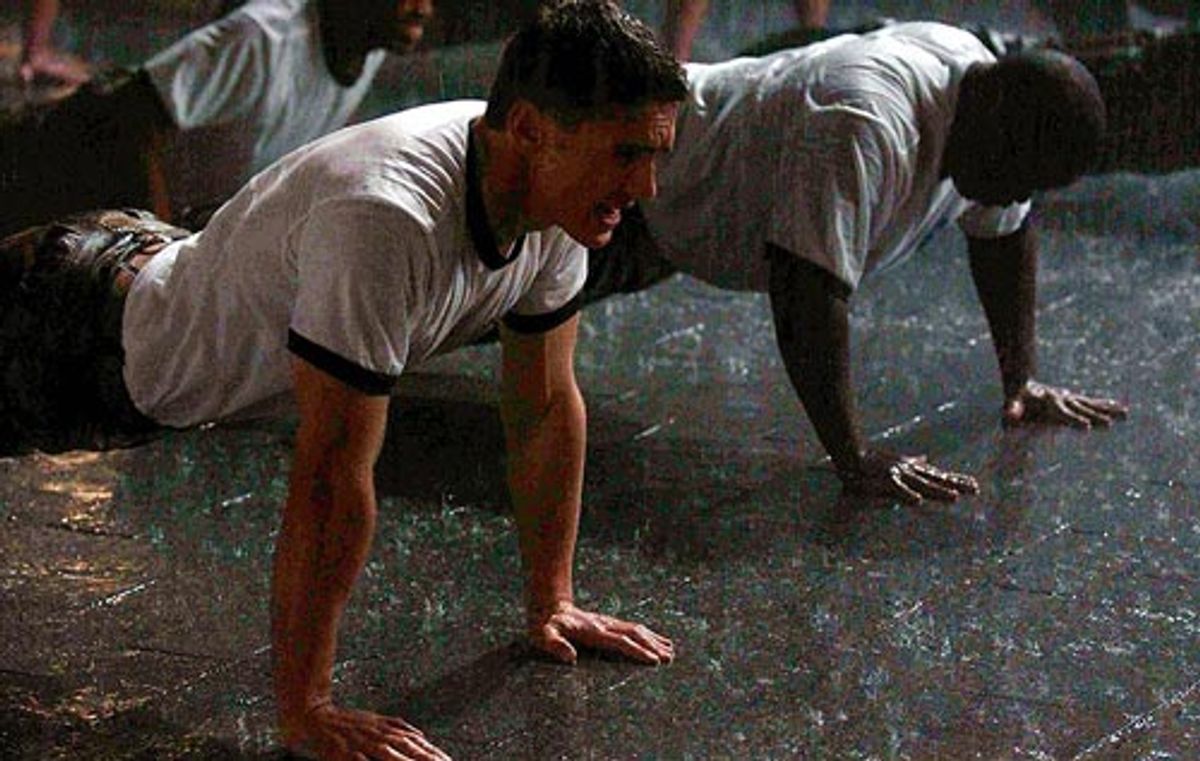 "Annapolis" is less like a movie than a virus -- one that clings so tenaciously to its host genre that it begins to take on the characteristics of a real movie, even though it's just faking. The story is so elemental (its script is by Dave Collard, who wrote the supremely entertaining "Out of Time") that it could almost work: Young Jake (James Franco) toils away at a shipyard -- his beaten-down-by-life dad (Brian Goodman) is also his boss. But his real dream, one his late mother had always hoped he'd pursue, is to attend the U.S. Naval Academy, in Annapolis.

Jake has never been a great student, and mostly he just gazes across the river at the campus that houses his elusive dream. (It's shot, with its assorted spires and domes, to look exceedingly dewy and romantic -- kind of like an American version of Istanbul.) But one day, a representative from the school shows up at the shipyard, telling Jake that a last-minute slot has miraculously opened. "A couple kids decided at the last minute they'd rather have fun at college," the rep tells him, a sure warning that Jake is going to have to work hard to measure up at this most demanding of institutions.

"Annapolis" is all about measuring up, and about becoming a man by toughening up. There are women at the academy, too, among them Jake's superior, a crisp brunette named Ali (Jordana Brewster); she takes a liking to him, but doesn't go easy on him. Yet the women in "Annapolis" are just tokens, with breasts. This is your standard "straighten up and be a man" story line, and the guy dishing out most of Jake's torment is the company commander, Cole (Tyrese Gibson), who picks on this first-year plebe only, of course, because he knows it will make the kid stronger.

"Annapolis" is also, by the way, a boxing movie: Before he was accepted at the academy, Jake was a feisty amateur in the ring, and he sees his big chance to get the better of the beefy, intimidating Cole: He just needs to train, hard, to qualify for the Navy boxing competition, the Brigade Championships, where he'll have a chance to whip Cole's ass. As it turns out, Ali is something of a plucky pugilist herself, and she helps him train for the big bout. Romance blossoms simultaneously.

The strange thing about "Annapolis" is that as I watched it, I found myself wanting it to work. I don't care that I've seen every plot element before, perhaps hundreds of times. But the director, Justin Lin ("Better Luck Tomorrow"), instead of simply grooving on the material's Coke Classic qualities, seems to feel he has to work hard to punch it up. The boxing sequences are sped up and chopped up, as most boxing scenes are in modern movies. They hold your attention about as well as a mediocre music video does: Neither the brutality nor the weird nuances of the sport register. (A good boxing sequence should put your heart in your throat, whether or not you like or "approve" of the sport, and not just serve up a mishmash of cool shots.)

"Annapolis" doesn't feel particularly modern, but it's not pleasingly retro, either. And for all its macho surface, it has a generic, neutered quality; it's the kind of picture that used to show up three times a night on HBO in the mid-1980s. But like so many disappointing movies, it's peopled by performers who do their damnedest to make the whole thing work. Vicellous Shannon (who played Lesra Martin in Norman Jewison's "The Hurricane") puts some real feeling, and a hefty splash of good humor, into the role of Nance, "the fat one." (Every basic-training movie has to have one.) And Franco is the kind of actor you might want to write off as too pretty, and too boring. But he has a serene quality that you don't find in all young actors. Beneath that regulation haircut, his ears stick out with the earnest innocence of teacup handles: He has that strong yet vulnerable masculine presence that we consider commonplace now, some 50 years after the death of James Dean (whom Franco has played in a TV biopic). Franco doesn't have a "great actor" aura about him, as Dean, of course, did. But he does have a certain amount of grave charm. He may never be a big star, but he's the kind of actor you can easily grow fond of, and there are worse fates an actor can suffer.