If they had geared up from the start to stop Alito, the Dems might have at least won a political battle. Now they'll lose both ways. 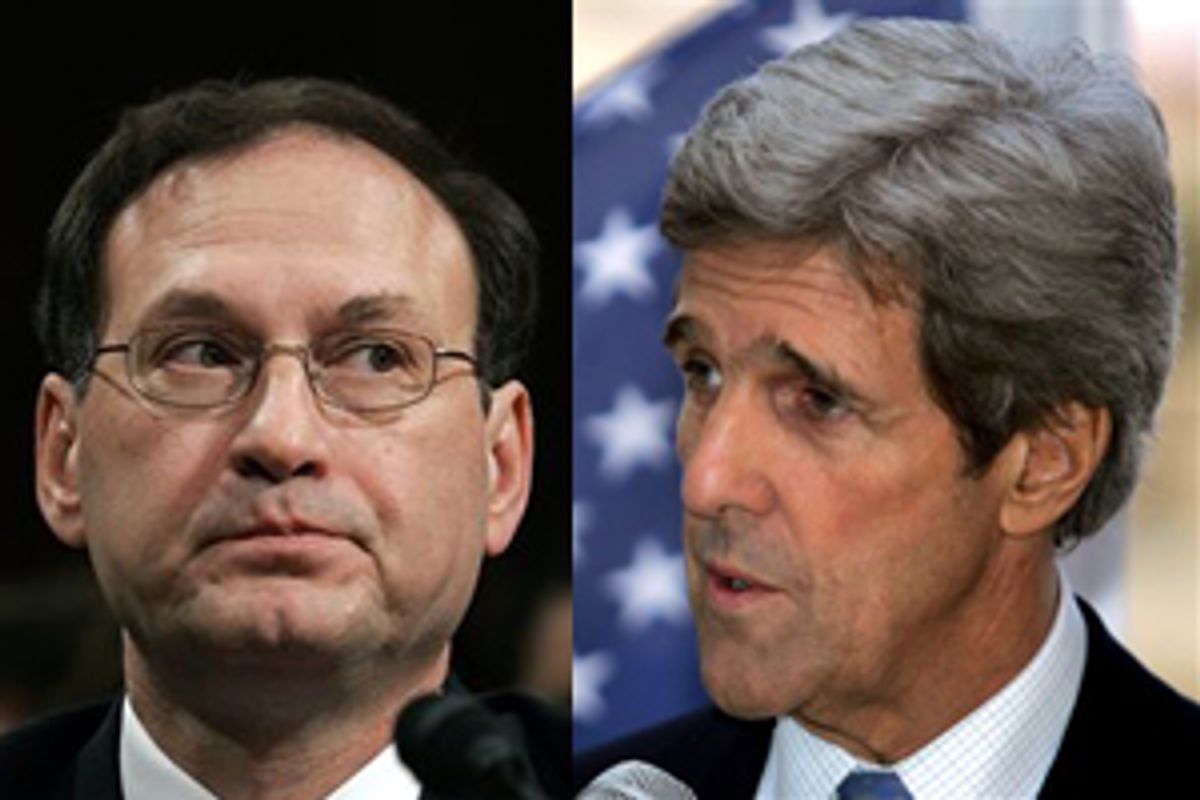 I grew up watching -- on a small, black-and-white TV screen -- Davy Crockett and the other stalwart defenders at the Alamo fight against overwhelming odds to the last man. To a child of the 1950s, it seemed so brave, so noble, so manly. But a few years later, as I sent my coonskin cap into retirement, I began wondering about what it must have been like to have been the next-to-the-last man at the Alamo. Looking out from the ramparts at the thousands of men that Gen. Santa Ana still had in the field, this penultimate hero might have briefly paused to reflect, "So what's so wrong with dropping my gun and running? Maybe I can somehow get away to fight the Mexicans another day -- or, better yet, help the Texas Republic in a fundraising capacity."

This week, for some odd reason, the Alamo kept popping up in my brain each time I thought about the man who by next Tuesday will be officially known as Supreme Court Justice Samuel Alito. The question of the day -- at least, in certain narrow political circles -- is whether John Kerry and Ted Kennedy are right in sounding the trumpets and rushing to meet the vast enemy forces with the bound-for-the-history-books rallying cry of "Filibuster!" (On second thought, maybe "Remember the Alamo" will be remembered longer.) Everyone has an opinion on this stop-Alito gambit, from the august New York Times ("It is hard to imagine a moment when it would be more appropriate for senators to fight for a principle") to the blogosphere (Daily Kos: "I'm not saying 'don't filibuster.' I'm saying, 'the math is not good. We need to make it better in the future'") to Republican Sen. John Cornyn, who called the Kerry-Kennedy plan "needless [and] strange."

Personally, I would be militantly in favor of these don't-stop-talking-until-tomorrow obstruction tactics if someone could explain the difference between the Senate voting to confirm Alito on Monday afternoon (without a filibuster) or Tuesday morning (after more than 60 senators vote to shut off debate). During the 18 extra hours that Sandra Day O'Connor would remain on the bench with an attempted filibuster, is the Supreme Court set to rule on the limits on a president's wartime powers? Is a legal case somehow hanging fire that would ban the teaching of evolution in the nation's schools? Because, if not, I fail to see the point. This is not about sending a message, since the only detail that has made it through the fog this week is that Kerry was flying back from Davos when the desperation ploy was announced. With a filibuster, the Alito roll-call vote that will be remembered by the White House and the political community is the margin by which the Senate cuts off debate -- and collecting more than 60 votes from Republicans and moderate Democrats will only embolden the president in making future judicial appointments.

I am not a political strategist nor do I aspire to play one on talking-head TV. But as idealistic anti-Alito liberals rush off to sign petitions and phone their senators, I feel compelled to point out that some of the end-game moves in Washington have been motivated by (ssshhh!) self-interest. In hindsight, the battle was effectively over after the first day of the Senate hearings when the criminally verbose Judiciary Committee Democrats failed to sustain a clear and consistent anti-Alito argument with all those cable networks broadcasting live. When politicians and interest-group leaders know that they are going to lose, they automatically retreat to a can-I-get-anything-out-of-the-wreckage calculus. So moderate senators from red states like South Dakota's Tim Johnson decide that they can buttress their independent credentials with home-state conservatives by supporting Alito, since the outcome would be the same no matter how he voted. Groups like People for the American Way realize that shrill calls for a filibuster might preserve their fundraising base even if their years of urgent appeals to prevent a right-wing Supreme Court takeover failed to change a single Senate vote. And Kerry -- whose late entry into the anti-Alito fray can be partly excused by his not serving on the Judiciary Committee -- is also aware that such dramatic gestures help him maintain an up-to-date, ready-for-'08 e-mail list of Democratic activists.

An intriguing question, if one entirely theoretical at this point, is what might have happened if Senate liberals had decided at the outset that they would use the filibuster to prevent the Alito-for-O'Connor seat swap. For Alito was the be-all-and-end-all Supreme Court nominee -- the moment to put aside wait-until-next-year caution. The odds on such a filibuster still would have been long, but at least there would have been a glimmer of coherence to a get-40-votes opposition strategy. Yes, Republican senators might have succeeded in employing the "nuclear option" (outlawing by a majority vote all filibusters against judicial nominees), but if a Democrat were elected president in 2008, that would have turned out to be a short-sighted GOP ploy. Instead, Alito opponents are now left with plenty of nothing. Even if there are future vacancies during the Bush era, Democrats are sufficiently demoralized that they would probably join in approving John Ashcroft to the Supreme Court on a voice vote.

So, as the days grow short before Bush gets his fifth and decisive vote on the court, I am swearing off filibuster follies and Alamo analogies. But such self-abnegation will not prevent me from indulging in a weekend of intense Harriet Miers nostalgia.