Rebels with a cause

GOP libertarians like New Hampshire Sen. John Sununu are fighting Bush -- and their party -- over the Patriot Act. 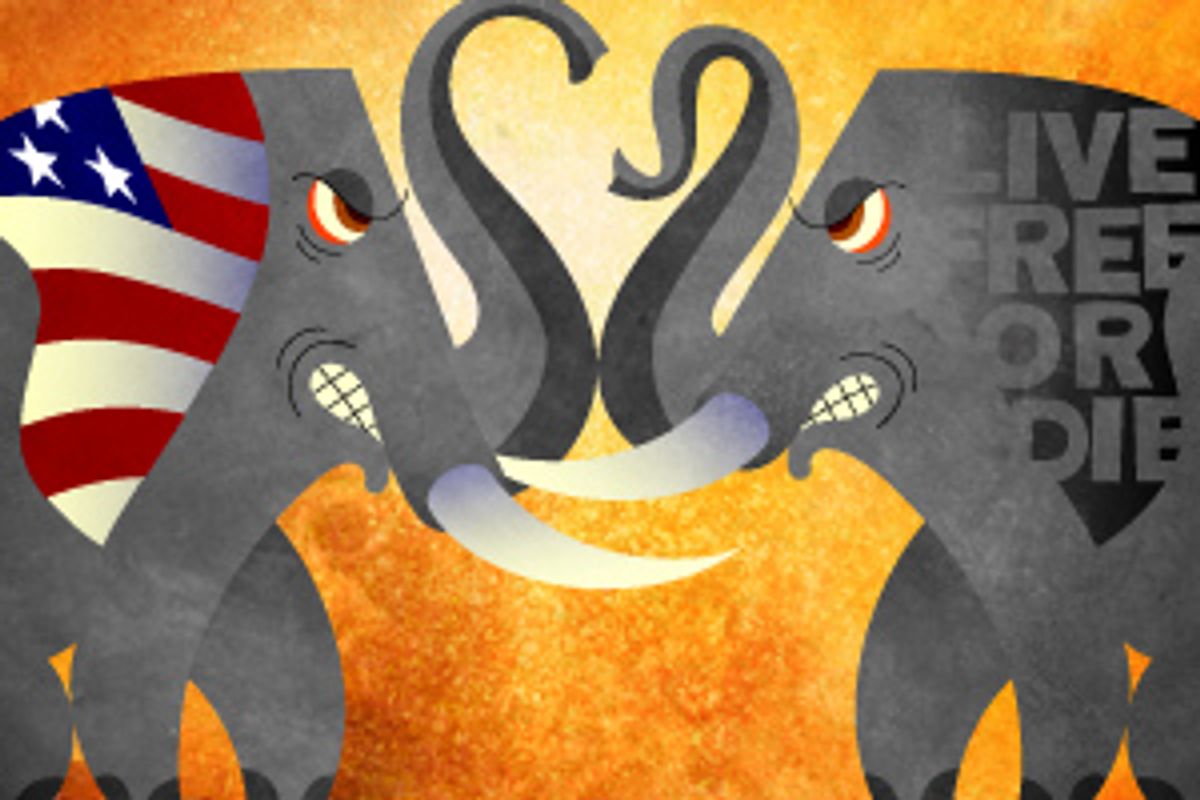 The Republican National Committee began running over the weekend a hard-hitting television spot that lacerates Senate Minority Leader Harry Reid for leading a pre-Christmas filibuster that prevented the rubber-stamp renewal of the Patriot Act. (In the ad, "Our Security Is Threatened" ominously fills the screen for several seconds.) Karl Rove previewed this line of attack in mid-January when the White House political svengali stressed to the RNC, "Republicans want to renew the Patriot Act and Democratic leaders take special delight in proclaiming they've killed it. That's an issue worthy of public debate."

When George W. Bush inevitably launches into a "my opponents are weak on national security" attack Tuesday night in his State of the Union Address, a clever TV producer might order up a reaction shot from first-term New Hampshire Republican Sen. John Sununu. Make no mistake, the mild-mannered, 41-year-old Sununu is an authentic conservative -- not one of those Northeastern moderates sneeringly referred to as a "RINO," a right-wing epithet standing for "Republican in name only." Rather Sununu is also emblematic of an under-appreciated libertarian strand in his party. And he and Idaho's Larry Craig are the leaders of a quartet of GOP senators who are standing up to the White House over the Patriot Act, scheduled to expire Friday, but likely to be briefly extended as the battle over its future continues.

Sununu is a political figure who has intrigued me since I covered his victorious 2002 Senate race against Democratic Gov. Jeanne Shaheen. It is not his flamboyance that caught my attention, since he is about as colorful as your typical MIT graduate who worked for a high-tech consulting firm -- Sununu's résumé before he was elected to the House in 1996. What I noted is that Sununu seemed far more a true believer and far less a poll-driven cynic than many of his colleagues in both parties. Sununu's faith in the conservative economic gospel is so intense that he actually asked me in the middle of a campaign interview, "How can you live in New York City with those high tax rates?"

Sununu's right-from-the-start pedigree is impeccable: His father, also named John Sununu, was a three-term anti-tax governor of New Hampshire and George H.W. Bush's first White House chief of staff. According to "Marching in Place," Michael Duffy's and Dan Goodgame's chronicle of that 1989-93 Bush administration, it was George W. Bush (known in those days as "Junior") who broke the news to the elder Sununu that he was finished as chief of staff.

None of this is to suggest that Sununu's stance on the Patriot Act represents some bizarre reenactment of "Family Feud." When I dropped by Sununu's Senate office last Monday to chat about the legislation, Rove's remarks to the Republican National Committee were still reverberating in Washington. Although Rove never acknowledged the four Republican dissenters (Alaska's Lisa Murkowski and independent-minded Chuck Hagel of Nebraska are the other Patriot Act skeptics), these GOP holdouts provide a needed bipartisan gloss to the cause as well as political camouflage for the Senate Democrats. "There's always going to be partisan rhetoric from the Democrats or the Republicans," Sununu said, giving a cautious response to the obvious Rovian question. "The Patriot Act is a priority for the president so it stands to reason that it would be raised at an RNC meeting."

Sununu purported to be optimistic about his revise-the-Patriot Act talks with the White House (in which Rove and Harriet Miers have participated) and the Justice Department: "I think we can work this out. I think we can find common ground." But a week later, there has been no visible movement toward compromise. Senate Democrats, who are uncharacteristically united in support of this particular filibuster, have been left on the sidelines as Sununu and Craig handle the negotiations over modifying some of the more draconian provisions of the legislation. Given the Senate's preoccupation this week with Samuel Alito's Supreme Court nomination and the State of the Union, the chances are better than 50-50 that Congress will merely vote to extend the Feb. 3 deadline for the Patriot Act's renewal.

Despite its all-Republican congressional delegation, New Hampshire is a libertarian state, not a right-wing bastion. And many of the contentious issues in the fight over the Patriot Act (searches of library records; gag orders on companies forced to hand over a suspect individual's records to the government; disclosure rules governing "sneak-and-peek" searches) fit the state's "Live Free or Die" license plate motto. Still, the Union Leader, New Hampshire's largest newspaper and the embodiment of hard-right Republicanism, recently wondered whether Sununu was being "politically naive" in aligning himself with Democrats looking for "another political issue with which to damage President Bush and the Republicans." That was mild compared to a December editorial in the venerable conservative weekly the National Review. The magazine accused Sununu, who has been an unflagging supporter of the Iraq war, of wanting to -- get this -- "endanger national security."

There is scant evidence from New Hampshire that Sununu, who is up for reelection in 2008, is running any major risk with his base with his stance on the Patriot Act. Voters in the Granite State have grown used to Sununu's occasional declarations of independence from the White House, most notably voting against the Bush Medicare prescription drug bill, as one of the tightfisted conservatives worried about the cost. As James Pindell, who edits an invaluable online newsletter called "PoliticsNH.com," told me, "Sununu is a guy who can come across as very arrogant, but he takes these quirky positions that makes you think that he really believes it."

Sununu, who as we talked was sitting under a brooding portrait of Abraham Lincoln, argued that many of his Senate GOP colleagues privately share many of his civil-libertarian concerns about an unmodified Patriot Act. "I think over half the Republican conference understands the basic issues at stake here," he said. "They understand that we're trying to draw common-sense boundaries between the need for law enforcement in terrorist cases and our need to protect the civil liberties of innocent Americans."

The difference between Sununu and virtually all these other Senate Republicans is ... well, moxie. Sununu, of course, will not describe it in such blunt terms. Instead he said gently, "A lot of members of the party are inclined to give a Republican president and a Republican attorney general the benefit of the doubt." After five years of the supine refusal of congressional Republicans to remember that they represent an independent branch of government, these comments represented the ultimate in understatement.

Wisconsin Democrat Russ Feingold, the only member of the Senate to vote against the original Patriot Act in 2001, hailed the courage of the pro-filibuster Republicans. "The pressure on them is extraordinary," he said in an interview. "You have both houses being Republican and a Republican president who is very hard-nosed and stubborn -- and you're at war. That combination makes it exceptionally difficult for people to buck the White House on this."

It is tempting to use party labels (augmented by descriptive adjectives like "moderate" and "maverick") as a shorthand for the white hats and black hats of American politics. But the divisions over the Patriot Act illustrate the limitations of such a lazy typology. The Republican senators loudly opposing a no-questions-asked extension of the Patriot Act are not celebrated naysayers like John McCain nor the always-on-the-fence New England moderates (Olympia Snowe, Susan Collins and Lincoln Chafee). Instead, it is Sununu and the libertarians on the right who are standing firm. That is why it would be fitting if a TV camera catches Sununu smiling with quiet satisfaction when the president does his predictable Patriot Act number during the State of the Union Address.