Rich, older moms in N.Y. and Chicago are snapping up $1,240 diaper bags and $500 bassinets. But the rest of the country is about to throw an enormous tantrum. 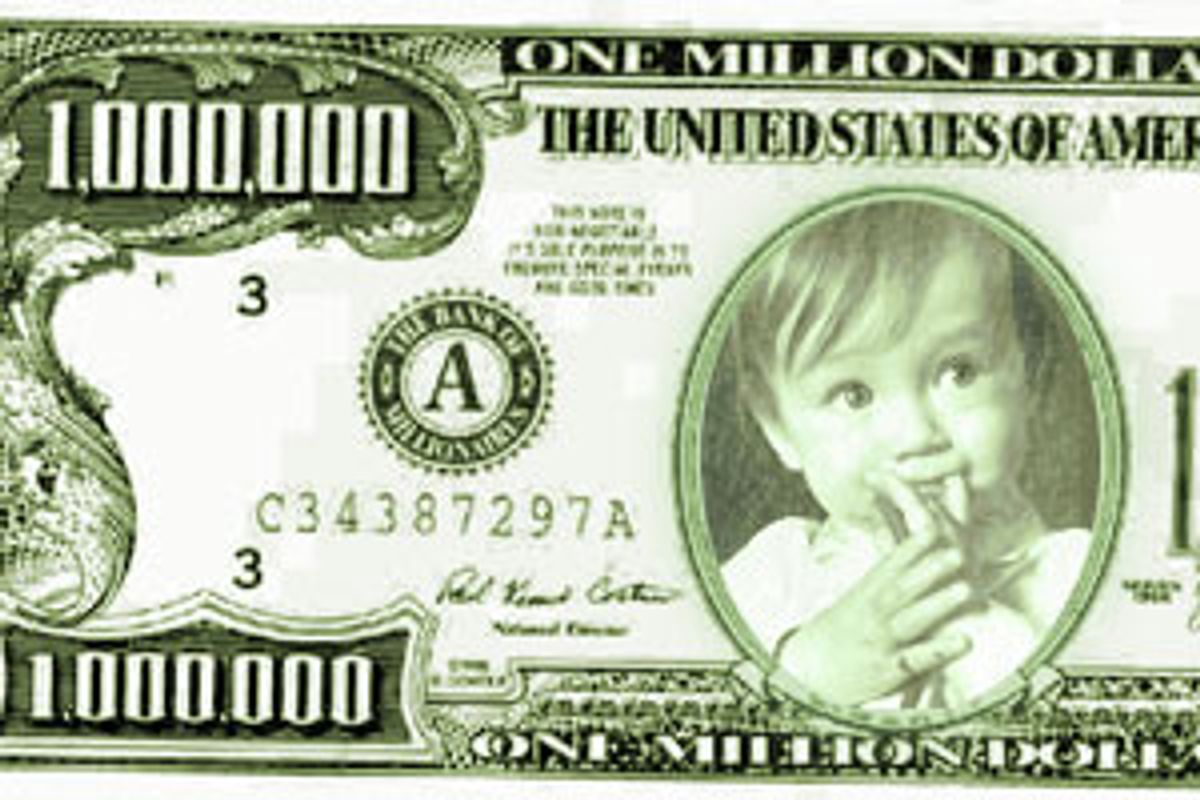 "Babies know so little about what's going on, sweetie," says posh infant-togs designer Lucy Sykes of the new compulsion among urbanites to pamper their indifferent newborns in luxury. "It's really for the parents." A former fashion editor and socialite sister to "Bergdorf Blondes" author Plum, she has a point: To date, no infant has actually requested a $45 bottle of Burberry Baby Touch Eau de Toilette Spray. Or signaled his approval of the $1,240 Louis Vuitton Diaper bag. Or wept because Citibabes, the new private club for New York City parents with a $2,000 annual fee, declined to let him crawl into its prestigious walls. Still, as Sykes, who describes her fall/winter line as perfect for "a nice baby tea at the Carlyle Hotel," confesses, "A lot of my Manhattan friends are spending so much on their babies they can't afford to go out for dinner anymore!"

While wealthy parents like these are forced to forgo necessities like peekie toe crab appetizers, the kids upscale product industry has been raking in an estimated $45 billion annually. Why the boom? As more U.S. moms wait until their relatively affluent 30s to give birth and race to give their offspring every possible competitive advantage, 30,000-square-foot "baby superstores" (such as the delicately named Buy Buy Baby), Euro-tot boutiques, and "educational" software companies are proliferating to suck up that affluence as efficiently as the $200 Whisper Wear Hands-Free Double Breast Pump extracts milk.

The lengths to which the baby industrial complex will go to exploit these avid parental consumers is surreal. Foreign language institutes in the well-heeled suburbs of Westchester County, near Manhattan, eagerly teach infants as young as 6 months old 11 different languages. Parents can skip the Mandarin class, of course, if they've managed to outbid the competition for a rare Chinese-speaking nanny -- crucial in case their babies show an early interest in controlling the new global economy. (Sadly, according to the San Francisco Chronicle, Bay Area parents increasingly have to make do with an Ethiopian or Eritrean caregiver, or even a passi Laotian.)

Anxious to inculcate your baby with a taste for minimalist European appliances? Fifty bucks can get you a 10-inch-tall replica of a Miele stove or washing machine. Why not a baby cot designed by Phillipe Starck? A $650 modernist doll house with its own garden and pool house? You may even be tempted to spring for a crib that vibrates soothingly -- a must for rattled infants who've been forced to take their first obesity-preventing swimming lesson, as the Daily Telegraph (London) reports, when only1 day old. If baby rejects such robotic lulling, a $100 "Why Cry" gadget, the world's first patented baby cry analyzer, will announce in just 20 seconds whether her wails indicate that she's "annoyed, bored, hungry, sleepy ... showing signs of stress/colic" -- or simply appalled by her parents' gullibility.

Perhaps most ludicrous of all: The people behind the Posh Tots catalog -- one of dozens targeted at spendthrift parents -- have seen fit to combine the uniquely incompatible words "child" and "chandelier," hawking 91 variations of this nursery must-have, from the folksy "Cow Over the Moon Chandelier" ($630) to the Classic Crystal Chandelier ($1,230), a miniature masterpiece of pretension.

Even the normally imaginative designer Marc Jacobs, who recently unleashed $400 cashmere baby hoodies on the planet, has said: "I can't imagine any of my friends not wanting to spoil their kids rotten." Try harder, Marc.

Yet signs of a growing baby-luxury backlash are appearing. A New York Times piece about $900 sidewalk-hogging Bugaboo strollers here. Exasperated posts on mothering blogs there. Pointedly irreverent books, such as "The Three-Martini Playdate: A Practical Guide to Happy Parenting," are openly mocking moms and dads who over-coddle. When Jeff Howe and Alysia Abbott, an expectant Brooklyn couple, were searching for baby names last summer, Howe dismissed several of Abbott's suggestions -- Spencer, Sebastian, the admittedly indefensible Willem -- with a weary: "Too Bugaboo." Which is to say, "too ubiquitously yuppie." One senses they're not alone.

One senses, too, that they'd be equally troubled by Cookie, the new shopping/lifestyle magazine for upscale parents, a distractingly beautiful title that favors $115 toddler haircuts and unapologetically JonBenet-ish photos of preschoolers fiercely clutching "mom's" $2,300 purse. With its debut issue, editor in chief Pilar Guzman, a frank, incisive woman who says things like "booze becomes a big friend in the early years of parenting," made a valiant effort to walk the line between "aspirational" and "galling," with several nods toward affordability. But as she puts it, "My readers want to curate a certain lifestyle for themselves that isn't necessarily the norm." So true: The magazine suggests you buy your kids single stock shares, conveniently framed, to hang in their rooms.

The New York Observer called Cookie "horrifying." Fortune implicated it in what's being called "the prince and princess syndrome." A reviewer on bloggingbaby.com, the popular blog for moms, seemed to agree: "Cookie had me gagging on my tongue and shrieking ... my husband calmed me down by reminding me that, "We're middle class. We're just middle class, it's okay. This isn't targeted at you." Another scornful mom posted: "[The magazine] seems to reflect a one-upmanship that's been going on in the parenting world." The sole pro-Cookie comment -- "Do you know how nice it feels to dress your child in $200 boots, a $300 outfit, and a $400 coat? You feel honestly proud" -- was slammed by a queasy poster: "You should feel honestly ashamed."

Sighs Guzman: "People get very self-righteous when it comes to parenting." For her, the real value of the baby-product explosion isn't the proliferation of "status" items, but an influx of good design, the sort she says sophisticated parents demand. And it's true: Never before have aesthetics so informed a parent's arsenal; even mundane potties and pacifiers have been subjected to Italian design exercises. "I don't know anyone in New York or Chicago who's having a baby before 32," Guzman says. This older mother, she says, is "often someone who's traveled, who's evolved. She doesn't want her house covered in Barney and plastic." Not that Guzman believes in total design ruthlessness, especially where her own child's yearnings are involved. "We have the SuperSaucer," she admits with a mixture of pain and tenderness, "which is the ugliest thing in the world."

Unfortunately, says Elise Mac Adam, a screenwriter and mother in her 30s who pens the blog Indiemom, which critiques ludicrous parenting, so many of these hiply designed objects become obsolete the second your baby outgrows them. So you honored your exacting design standards and bought the $500 neo-Eamesian Ooba Nest bassinet in walnut? "What do you do with it afterwards?" she asks. (Unlike, she points out, the legendary David Netto Design changing table, conceived to evolve into grown-up furniture.)

Mac Adam reserves special disdain for parents she sees in New York's Upper East Side pushing the pauncey Silver Cross pram (which, as a piece of traditional design, rivals a Bugatti). This pram, she says, only works for a month or two, since most kids want to ride sitting up fairly quickly. "It seems like those parents don't even need to think about practicality," she says. "They don't live in the same world as I do. They live in a fantasy."

There's no time for outrage at another popular blog, Baby Chic 101, updated by Patty Shaw, 25, a childless teacher who's nonetheless nuts about baby stuff. Not when product-deprived moms are awaiting posts like "Britney's Car Seat-Correction!" and "Opinion: Why there should be more Buy Bye Babys." In the latter, Shaw confronts some hard realities: "Sadly," she states, "there are only eight [Buy Buy Baby stores] total on our lovely planet. Eight!?" But, after urging her readers to pilgrimage to these outlets and agitate for a national expansion program, she rousingly concludes: "Together we can change the baby world. One top-notch store at a time."

"This is a phenomenon called displacement consumption," says James Twitchell, Ph.D., author of "Lead Us Into Temptation: The Triumph of American Materialism." "It always comes out of anxiety and what's more anxiety-provoking than, My god, I have a baby?" He points out that consumerist parents too conflicted to conspicuously indulge themselves (selfish!) sidestep guilt by buying their newborn a status stroller (doting!). "You're spending on your baby, though," says Twitchell, "so the assumption is: No one's going to criticize me."

Another driving force behind such extravagance, Twitchell argues, is the universal need for community. "Americans used to be defined by how we went to church, or by our schools. But now it's really about consumption communities. The question becomes: 'Can you assemble, by buying things, a coherent presentation of the self as part of a community?'" (Bugaboo parents, unite!)

"Have you seen this new magazine, Noodle?" he asks.

"Yes, Cookie. I have never seen a clearer acknowledgement that children have been reduced to accessories."

Dr. Margaret Wehrenberg, a clinical psychologist who practices in an affluent Chicago suburb and lectures on "The Overindulged Child," has seen the unsightly consequences of that attitude. "The risk is making your baby an object, someone who eventually learns that her primary value to you is the way she looks. And out of that can grow a child who's consumed with appearance. Anorexia. Compulsive exercise."

Not to mention one who's lazy and unmotivated. "As we all know," says Wehrenberg, "desiring something and knowing you have the potential to get it causes you to work hard and feel very satisfied when you get it. But kids from wealthy families are getting everything they want. They literally have nothing to work for."

Competitive parents who lavish their babies with Ooba bassinets and Russian language classes at 6 months, she says, often develop a mind-set that they can buy their children everything they need. "But what growing children's minds really need," she says, "is time for free play. Time to just stare into space and allow the brain to rest, to form new connections, new ideas, and learn how to soothe itself."

It's all very dire. One can only hope that, just as prosperous Americans tired of the novelty of overindulging their dogs, and moved onto babies, their focus might soon shift to something less likely to lapse into indolence. Plants, maybe. Plants would be a lot more impressive with individual Marc Jacobs cashmere leaf-covers.

Indiemom's Mac Adam, who knows a compulsive stroller-collector ("she has six for two kids"), gave up trying to wow other parents with infant paraphernalia long ago. The emotional cost was too high. "My first visit to Buy Buy Baby made me feel like a loser," she says. "The sheer volume of stuff, and the sheer number of choices that had to be made." Not to mention all the hyper-focused, salivating moms. She says she lost it "somewhere near the cribs and co-sleepers." She didn't quite make it out intact. "I started weeping on the stairs."

Dale Hrabi is a regular contributor to Elle and Radar. He lives in New York City.