A Missouri Republican is poised to replace Tom DeLay at the party's helm -- and carry on DeLay's tradition of enriching his friends. 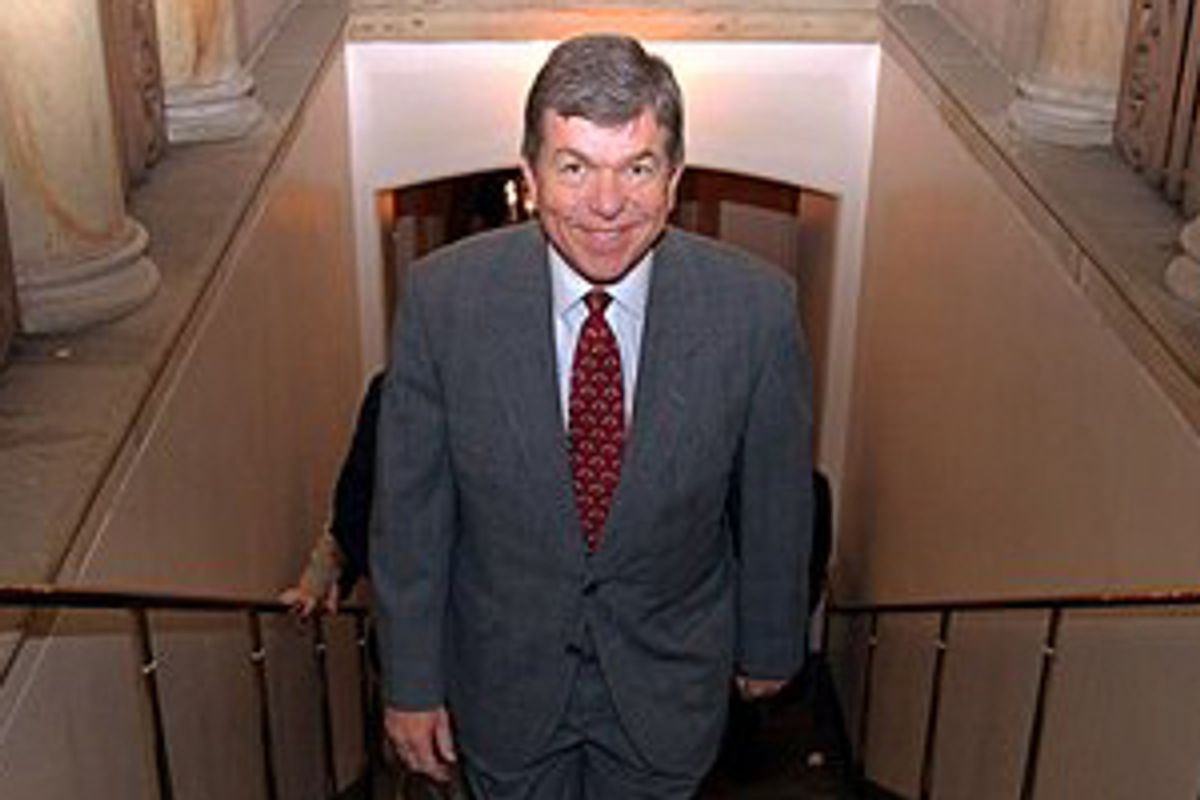 At high noon Thursday, 231 House Republicans will gather in the ceremonial third-floor caucus room of the Cannon Office Building on Capitol Hill. Beneath baroque chandeliers and between faux-Corinthian columns, the lawmakers will secretly scribble on blank index cards their choice to succeed Tom DeLay as majority leader of the nation's largest legislative body. The anxious press, barred from observing the election, will wait in the hallway for news of a victor.

If history is any guide, most of America won't be paying a lick of attention, despite the fact that DeLay's successor will help define the Republican Party for years to come. Stop five people in a supermarket and it is unlikely you'll find one who can pronounce the name of Ohio Rep. John Boehner free of embarrassment (it's BAY-nor), let alone tell you the names of his two opponents for the job, Arizona's John Shadegg and Missouri's Roy Blunt. Leadership elections are decidedly insider events, quiet reshufflings of the reins of power. "I like to compare these to student government elections," says John Pitney Jr., a former National Republican Party official who now teaches politics at Claremont McKenna College. In other words, it's a popularity contest that might matter a lot to the kids in Ms. Peabody's sixth-grade class, but doesn't score a blip among the fifth-graders playing tag at recess.

Yet there are a few people who care a great deal about the vote: an exclusive club of just more than two dozen lobbyists. They are the former staffers of the three candidates, men and women who have traded on their experience in Congress for six-figure incomes as industry power brokers. In general, lobbyists are as powerful as the friends they keep. If their former boss gets a promotion, they, by default, do as well. The loyalty goes both ways. "I would help him with anything he asks me for," said one of the many lobbyists who once worked for Blunt. "He has very, very loyal former staff. I still call him boss to this day."

Blunt's aides are not alone in their fealty. The former Blunt staffer described a recent conversation he had with another lobbyist, a close confidant and golf partner of Boehner. "If Roy [Blunt] wins tomorrow, my world doesn't change, because I don't know the majority leader now," the Boehner booster told him. "But if Boehner wins, things change pretty drastically."

By most counts, Boehner, who chairs the House Committee on Education and the Workforce, boasts the most former staffers-turned-lobbyists, as many as 24 by one count. Shadegg, who has not served as a committee leader, claims far fewer direct ties. But it is Blunt, and his numerous former staff, who have garnered the most attention. Not only is Blunt heavily favored to win the election, but his former aides have already climbed to the top of the lobbying profession by trading on his name.

Back in the glory days of DeLay's reign, before the Jack Abramoff scandals and the Texas indictments, the fastest ticket to special favor ran through a boutique lobbying outfit called the Alexander Strategy Group. The firm had been founded by several former aides to DeLay, including his former chief of staff Ed Buckham. It employed DeLay's wife, Christine. It attracted some of the wealthiest companies in the country as clients, including such firms as AT&T, Eli Lilly and Microsoft, that were drawn by the promise of direct access to the second most powerful lawmaker in the House. Now the next generation of powerbrokers are jockeying for their turn as gatekeepers.

If you go to the Web site of Cassidy & Associates, Washington's second-largest lobbying firm, you can find a description of Gregg Hartley, the firm's vice chairman. He is described as a lobbyist with connections to Blunt and other GOP leaders "unsurpassed by any other group or individual in Washington." "I'm working with a group of people that I know," boasts Hartley, who was Blunt's closest advisor for the better part of 18 years before becoming a lobbyist.

Such credentials have given Hartley an impressive array of clients, corporations and trade groups who were served well by Blunt when he was DeLay's second in command until late last year, according to documents obtained by Taxpayers for Common Sense, an advocacy group that opposes excess government spending. After Ocean Spray Cranberries hired Hartley, Congress instructed the U.S. Department of Agriculture to buy more than 34 million pounds of cranberries to stabilize their price. After the Dairy Farmers of America hired Hartley, Congress extended a $22 million program to provide foreign "dairy development" assistance. After a pro-capitalist student group, Students in Free Enterprise, hired Hartley, Congress showered the group with government subsidies of near socialist proportions -- $750,000 for capital improvements to the group's Missouri headquarters.

But Hartley is not the only former Blunt staffer in a position to reap the rewards of his promotion. The list of his former staffers is varied and extensive, including Brian Lenihan who lobbies for the American International Automobile Dealers, a trade group; Trevor Blackann who lobbies for Jacobs Engineering Group, a major defense contractor; and Christina Blasinsky who works for the National Association of Convenience Stores, and who served as a lobbyist for the National Beer Wholesalers Association. Ali Amirhooshmand, a former Blunt policy analyst, was recruited by Hartley to work at Cassidy, as was Todd Boulanger, a former colleague of Abramoff, whose wife, Jessica, still works as Blunt's spokeswoman.

"What these folks are doing is selling their connections," explains Melanie Sloan, head of the left-leaning Citizens for Responsibility and Ethics in Washington. "If their boss becomes majority leader they can push any piece of legislation." For ethics reformers, this situation typifies the pay-to-play problems of Washington. Those with more money can buy better access. With better access come bigger and better legislative victories.

The lobbyists in the trenches, however, do not see what they do as a corruption of the democratic process. For them, their work is the apotheosis of democracy. David Hebert, Blunt's former chief of staff, disagreed with the common notion that Blunt's fortunes would influence his own lobbying business. "There are a lot of people in this town who have great relationships with all the candidates," he said. "The fact is there is so much money in the system."

But lobbyist ties to Republican leaders have become something of an albatross in the wake of the Abramoff scandals and the campaign finance charges that brought down DeLay. All three candidates for majority leader have run their campaigns on platforms of ethics reforms. All three have tried to distance themselves from K Street, though only Shadegg, who trails in all preliminary vote counts, has made a credible case that he would move beyond DeLay's legacy of prodigious handouts. Whoever wins, Democrats are sure to exploit the new majority leader's ties to lobbyists as part of the "culture of corruption" campaign theme heading toward midterm elections.

But the more interesting question hanging over the race for majority leader concerns a growing divide within the Republican Party itself. As it stands, the Republican caucus is split between those who support DeLay, Blunt and Boehner's allegiance to lobbyists, and those who profess a more idealistic conservatism. "The broader problem is sort of a disillusionment moving through the gras-sroots base," said Vin Weber, a former Republican congressman from Minnesota, who now works as a lobbyist with significant credibility in Republican circles. "The goals of limited government, fiscal responsibility, and market-oriented reforms has been lost."