"Our people will never rest"

In an interview, exiled Hamas leader Khaled Mashaal says the Palestinians' struggle will continue until the Israeli occupation ends. 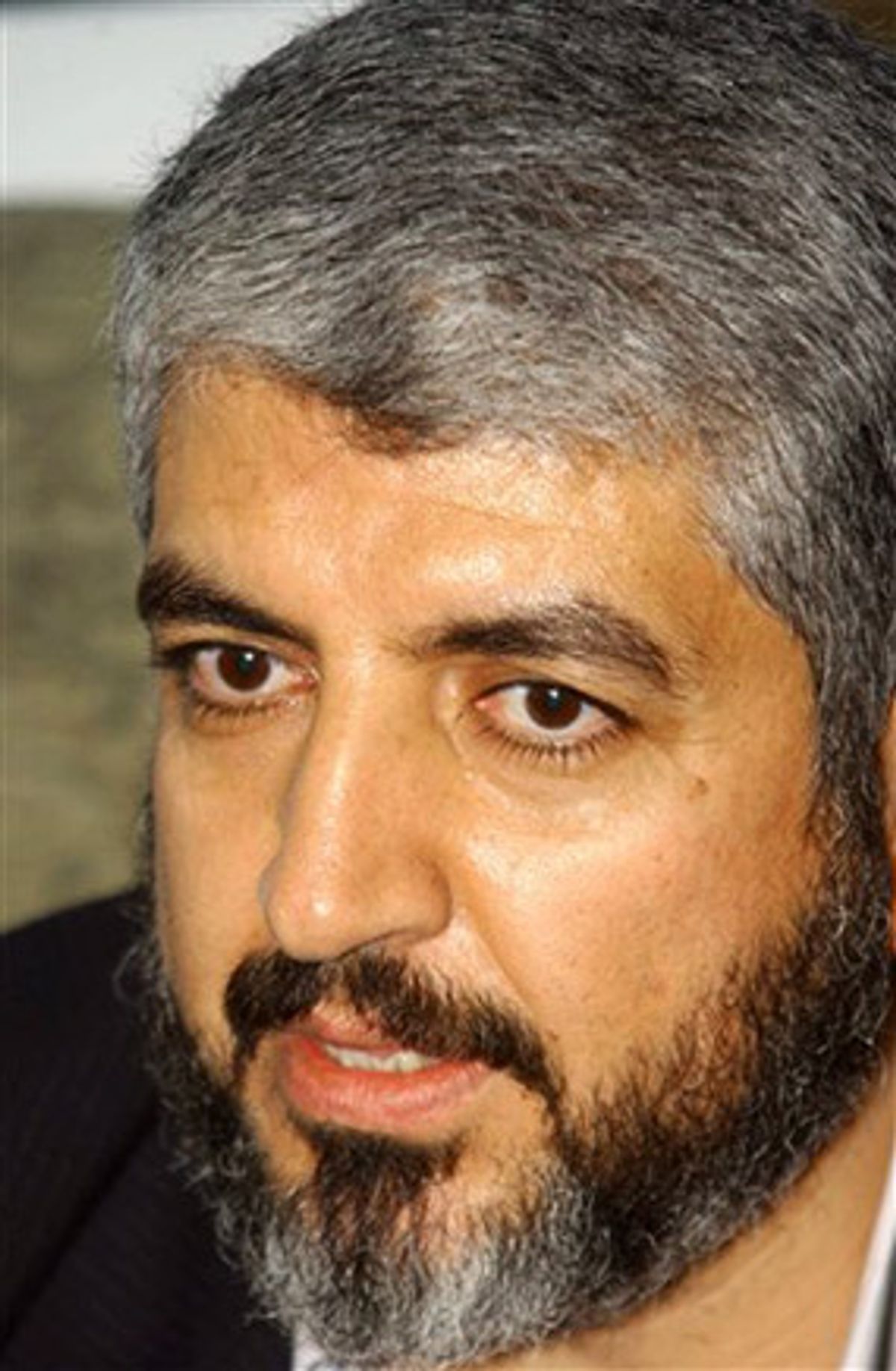 Khaled Mashaal, the exiled political leader of Hamas, discusses the Palestinian people's right to resistance, the struggle against Israel, the future government and how it will shape its relations with Europe and the West.

Mr. Mashaal, you are the leader of a terrorist organization. Have you killed any Israelis yourself?

We are a national resistance movement, not a terrorist organization. We have the right to resist the occupation, and now we also have added legitimacy as a result of our election victory. This should serve as the basis for the way the Western media treats Hamas. Hamas does not kill; instead, it resists an occupation. There is a difference between killing and resistance.

The victims don't care about this difference. But what will happen now in Palestinian-controlled areas? Hamas wants to govern. Will your organization transform itself into a governing party, or will the struggle, which many in the West describe as terrorism, continue nonetheless?

Hamas plans to assume governing duties and work with the Parliament. We will introduce reforms for our people, fight corruption and develop political structures on a democratic foundation. At the same time, the resistance against the occupation will continue until it disappears from our soil.

With all means of resistance, unless the international community applies pressure to Israel and Israel withdraws. I am amazed at how the Europeans think about us. How did the European people free themselves? How did the United States of America fight for their independence? Resistance is a right.

So Hamas plans to govern, but it also plans to continue launching suicide attacks and allowing the Kassam Brigades to fire rockets, all as if nothing had happened?

Resistance comes in many forms and methods. We will stop targeting Israeli civilians when Israel stops its aggression against Palestinian civilians. As soon as Israeli Apache helicopters stop targeting people, vehicles and homes, we too will stop firing rockets at Israel. We are not talking about two countries at war with each other. We don't have a country, and our weapons are weak compared with those of the Israelis.

We just won the battle for Gaza.

You declared a cease-fire before the elections. Will you continue to abide by it?

Our experiences are not good. We declared a cease-fire in 2003, but Israel didn't respect it. The same thing happened in the previous year. Nine thousand Palestinians are sitting in Israeli prisons, Israel continues to build its wall, Israel continues to confiscate Palestinian property and build settlements, and Jerusalem is being Judaized and cut off from the West Bank.

Does this mean that Hamas will resume its attacks and violence?

We want Israel to respect the Palestinians' rights, be willing to withdraw and put a stop to its aggression. Then we will be willing to talk about a long-term cease-fire.

Where should Israel withdraw?

As you certainly know, before he was killed in March 2004, Sheikh Ahmed Yassin, our spiritual leader, announced that he was willing to consider a long-term cease-fire if Israel would withdraw from the West Bank and Gaza -- to the 1967 borders. But Israel would not accept that. Saudi Arabia took up this proposal at the Arab summit in Beirut [Lebanon] in 2002. Once again, Israel ignored it, as did the American government and the international community.

Europe is now imposing conditions on Hamas. It wants Hamas to recognize Israel and the Oslo accords. How do you feel about this? Are you interested in making a fresh start?

No, certainly not. But the Palestinian people were familiar with Hamas' goals and strategies when they voted for us. That's why the international community must negotiate with us. The world respects the principle of democracy, and so it must also respect the results of democracy. Besides, there are all kinds of political leaderships with various convictions, but no one imposes conditions on them before the international community is prepared to cooperate with them. We will treat contractual agreements as a fait accompli. We will act realistically, but we also refuse to betray the rights of the Palestinian people.

Do you accept the 1993 Oslo accords, which include the recognition of Israel?

I didn't say anything about that, because the purpose of this agreement was not to bring about rights for the Palestinians. The accords failed, as we predicted. Nevertheless, we do treat them as fact.

It's also a fact that Palestine depends on financial assistance from Europe.

We will confront reality. The Palestinian people elected us and did not impose any conditions. Why is the international community doing so?

One of the reasons Hamas was voted into office is that the old guard at Fatah was tired and corrupt. That would suggest a desire for a better government.

There is considerable reason to believe that you will use this assistance to pay for your struggle against Israel.

Certainly not. Europe, the United States and the international donors should propose ways to monitor the use of the funds. Our social projects and our communal governments are perfect examples of transparency. Even European and American reports state that the projects managed by Hamas are free of corruption. If the international community cuts off its assistance, it will be punishing the Palestinian people, not Hamas. The West may withdraw from its responsibility, but not the Arab and Islamic countries.

Iran, for example, has offered to jump in. Doesn't this offer come at a convenient time for you?

Not just Iran, but all Arab and Islamic countries are willing to do so. This is why Europe and the United States should not cut off aid; they should not sever their connection with Palestine.

How close are you to the Iranian regime? Do you share Iranian President Mahmoud Ahmadinejad's views that the Holocaust never happened and that his country has the right to nuclear weapons?

Iran is saying that it wants to have nuclear energy, which would not place it in violation of any agreements. But the international community accuses Iran of having other intentions. It's taking a duplicitous approach, especially America. It should demand that Israel discontinue its nuclear program. As far as the Holocaust is concerned, there is no one who denies that the Jewish people suffered great injustices. Nevertheless, it is necessary to scientifically analyze the event and determine the scope of the Holocaust.

There is already extensive, internationally recognized research in this area.

Then why did you want to establish an Islamic state throughout the Palestinian Authority?

We want an independent Palestinian state in a country freed of occupation. We want full sovereignty. We will leave it up to the Palestinian people to decide what that state will look like. You should realize that the peoples of this region have an Arab-Islamic culture and history, just as Europe has its roots in Christianity. Islam is a tolerant religion that recognizes other religions. The Christian holy sites in Jerusalem, Nazareth, Bethlehem and many other places in Palestine are respected by Christians and Muslims.

The Islam that we want is open, tolerant, without compulsion and hate. There is a verse in the Koran that reads: No compulsion in faith. Religion is a choice, and so is practicing religion. Anyone who doubts that should ask the people in Palestine this question: Is there anyone who imposes religion on you or forces you to go to the mosque, to wear the head scarf? This compulsion does not exist.

What happens to the Autonomous Authority now? Will [President] Mahmoud Abbas remain in office?

We have great respect for him. He endured the election with dignity and we plan to work with him, more than Fatah worked with him, in fact.

Will there be a government made up of Fatah and Hamas?

We will involve Fatah in the government, we will invite Fatah to do so, and we will ensure that Muslims and Christians, women and men are involved. We would like to see the government be made up of technocrats, that is, experts. Its goal should be to further Palestinian interests.

Who will control the security forces?

The Autonomous Authority, that is, Fatah, is currently attempting to shift responsibility for the security forces from the government to the president. It's a game that we refuse to play. The government is responsible for security, as well as for political and economic decisions. We will discuss this with Abbas.

Who will control Islamic Jihad, the Al-Aqsa Brigades and other militant groups?

We are in a position to incorporate them into the national project. They will behave the way the Autonomous Authority and the government suggest. But we also have brothers with other ideas, and we will deal with them.

Don't you think that the Palestinians are fed up with killing?

Our people will never rest as long as there is an occupation. Occupation and aggression generate additional energies. This is an idiosyncrasy of people who are fighting for their freedom. Hamas was elected because we can bring about reform and fight corruption, and because we enjoy great credibility.

You have been living in Damascus, Syria, for many years. When will you return?

When the time is right.

When you are no longer on the Israelis' hit list?

The threats continue, even after the election.

You have seven children, three daughters and four sons. Would you send one of your sons into war against Israel?

Mr. Mashaal, thank you for talking with us.

The interview was conducted by editors Susanne Koelbl and Gerhard Spörl and Spiegel employee Kristin Helberg. It was translated from the German by Christopher Sultan.