The president's conservative base feels increasingly betrayed by his big-spending, big-government administration. Will it abandon him in 2006? 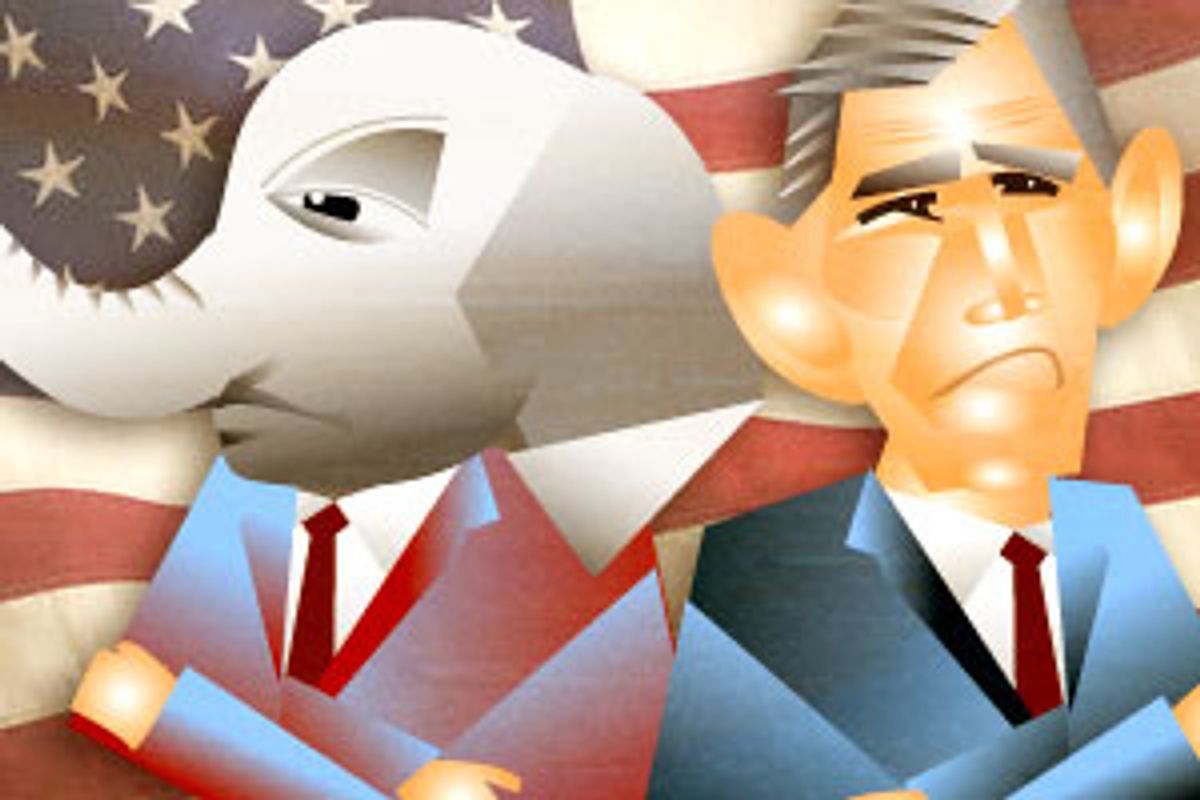 After George W. Bush delivered his State of the Union last week, White House aides arranged a private conference call with the president's top conservative allies. The goal was to rally cheerleading pundits with talking points, but right-wing leaders called in with a heavy sense of foreboding.

"I listened in on several White House calls before and after, boosting the troops," said Richard Viguerie, the 72-year-old direct mail pioneer who rose to fame and fortune working on Ronald Reagan's 1980 campaign. "They all sang the same song -- 'Oh boy, we hit a home run.'" Viguerie wasn't buying it. "Look at the treatment conservative issues got in the State of the Union. It was just perfunctory. It almost wasn't there. It was very disappointing."

Instead of shoring up the conservative base, Bush's bland rhetoric and ticky-tacky domestic initiatives -- more switchgrass, less malaria -- only confirmed conservatives' ever-growing concern: Far from an heir to the legacy of Ronald Reagan, the president has become just another free-spending, big-government politician.

The governor who wooed conservatives in 2000 became a president who increased federal education spending, signed a pork-laden 2002 farm bill, and passed the largest new entitlement since the days of Lyndon Johnson, the Medicare prescription drug bill. After becoming a champion of leave-us-alone libertarians, he went on to authorize a vast expansion of executive power with the Patriot Act and warrantless wiretapping of Americans. And after promising to appoint another Supreme Court justice like Antonin Scalia or Clarence Thomas, he nominated his own ideologically unknown lawyer, Harriet Miers, to the job.

As Viguerie put it, "When there are no microphones around, when it is just us there, people are really, really ticked and frustrated." With the 2006 elections just over the horizon and the 2008 presidential race already underway, activists like Viguerie are no longer content to just sit by and shake their pompoms.

A day after the speech, conservative pundits George Will, Peggy Noonan and Robert Novak had all panned Bush's performance in syndicated columns. The Wall Street Journal editorial page compared Bush's new agenda to -- gasp! -- "Clintonian 'triangulation.'" The Web site of the socially conservative Family Research Council criticized the White House's lack of resolve on moral issues, noting Bush's passing reference to keywords like "values," "family" and "life." "Trust is not unconditional," Tony Perkins, the group's leader, warned GOP leaders in a videotaped message posted online. Even Phyllis Schlafly, the grand dame of the right-wing Eagle Forum, penned a biting article on the president's centrist immigration proposals. "Bush is alienating his political base," she declared, "and creating what one RNC [Republican National Committee] member calls an 'enthusiasm deficit.'"

Listen carefully and one can hear the slap of a new gauntlet being thrown down at the feet of the president and the GOP leaders in congress: Change course or face a depleted, if not disastrous, conservative turnout in the 2006 midterm elections. "Winning can be overrated sometimes," explained Viguerie, who began his career comfortably on the right-wing fringes of the Republican Party. "There have been times when we have advanced the cause in a major way when we lose."

No one yet knows how many conservatives will follow through with these threats. But the feeling among the grass roots may be more unsettled than at any point since 1998. "There is a sort of universal disquiet," explains David Keene, the chairman of the American Conservative Union, who will welcome the Conservative Political Action Conference, the largest annual gathering of right-wing activists, to Washington on Thursday. "But it's unclear whether it's serious enough to result in the sort of depression that would elect a bunch of Democrats in 2006."

To counteract the rumblings, activists with the closest ties to the White House have launched a counteroffensive to rally the troops back to the president's side. In a recent article in the American Spectator, Grover Norquist, a conservative activist close to Bush advisor Karl Rove, argued the Republican Party was beginning to turn a corner after a disastrous end to 2005. "A rational conservative movement would be moderately happy," Norquist says, pointing to the regular rounds of tax cuts, the 2003 partial birth abortion ban and the two recent appointments to the Supreme Court. "Do I have everything I want? No. But that was a problem that started when I was 2."

Instead, he blamed the current anger over the president's weak-kneed agenda on moderate Republicans in Congress. "The response to being 20 votes short of actual control in the House and another five to seven seats in the Senate is to get more conservatives elected," he said. "Not to whine."

But times may be a-changin', say several conservative leaders. With three years left of his administration, Bush's work as a tax-cutter and judge-picker is mostly done. Like the rest of Washington, conservatives are beginning to look beyond Bush to the 2008 election, where the moderate John McCain, the conservative movement's longtime nemesis, is poised to win the Republican presidential nomination. "The first race is going to be to decide who is going to take on John McCain," said Keene. "If the first race is decided late, John McCain will be the nominee." While names pop up -- like Virginia Sen. George Allen, Kansas Sen. Sam Brownback, and South Carolina Gov. Mark Sanford -- the conservative leaders have yet to find any consensus on a single nominee. "There is certainly a need for a conservative candidate," explained Schlafly. "And conservatives do not know who that person is."

According to one theory being circulated, a major GOP defeat in 2006 could actually help McCain's GOP challenger by forcing the party to shift right as it heads into the 2008 races. As Viguerie stressed, past Republican electoral defeats had repeatedly led to conservative victories. "If Ford had been elected in '76, no way Ronald Reagan would have been elected president in 1980," explained Viguerie, who stopped short of endorsing a GOP defeat. "And for sure, if [George H.W.] Bush had been elected in '92, no way you would have a Republican Congress in 1994."

In the meantime, conservatives have upped their rhetorical attacks on the White House. Schlafly points to a little-noticed donnybrook that took place on Jan. 19 at the annual meeting of the Republican National Committee in Washington. Behind closed doors, the White House sent in Vice President Dick Cheney and Republican Party chairman Ken Mehlman to prevent a debate over Bush's guest worker program, a major sore spot for many seal-the-border conservatives. Schlafly says conservatives will not stand for that kind of treatment. "The conservative Republicans are a grass-roots movement," she said, "and they don't want to be a Bush party."

In fact, the conservative pressure on the White House will only intensify in the coming months. At the end of February, Bruce Bartlett, a conservative who worked in the Reagan White House, will release a widely anticipated book, "Impostor: How George W. Bush Bankrupted America and Betrayed the Reagan Legacy." Bartlett describes Bush's control of the party as tenuous. "Conservative discontent remains strong and is simmering very slightly below the surface," he wrote Salon in an e-mail. "At some point, a serious Republican candidate for 2008 is going to recognize that running against Bush may be the ticket to the nomination."

That is just the thing that the conservative movement's founding leaders hope will happen. For Viguerie, Schlafly and other supporters of Barry Goldwater and Ronald Reagan, Bush is little more than a wobbly steppingstone in the decades-long conservative revolt against the liberal status quo. As a president, Bush long ago betrayed the movement's core values. "It seems to me that early on Bush and Rove decided on a one-word strategy to govern and for reelection in 2004. That one-word strategy was 'bribery,'" said Viguerie, whose next book, provisionally titled "The Betrayal of Conservatives," is due out this summer. "You got the votes, we got the money. Let's talk."

"I feel like the conservatives almost have to be like the Jews from the Old Testament, who had to wander 40 years until that generation passed from the scene," he continued. "We have to have new leaders. Hopefully the Lord won't make us wait 40 years."

Blustery rhetoric like this is nothing new for political activists on the left and the right. Ideological purists often find themselves shunted aside once their party is faced with the task of governing. But at a time when the nation is so deeply polarized and so evenly divided, the slightest erosion of the president's political base could have exponential effects. Democrats in Congress might yet live to see the day when they can thank activists like Viguerie for sticking to their guns.