Introducing Bode Call: Let the Games begin! Plus: Britney sort of apologizes, celebrity offspring embarrass, and Page Six pats self on back. 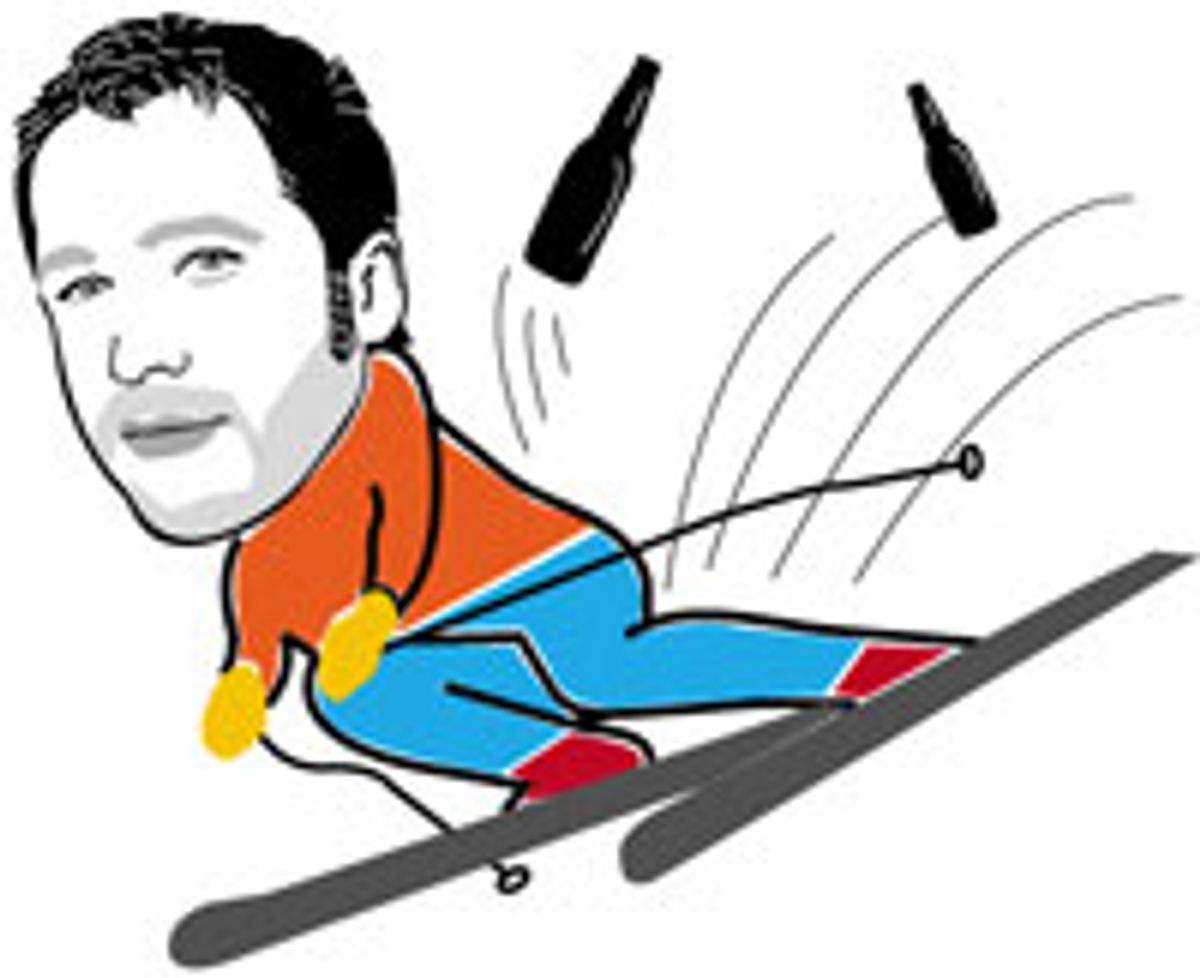 Introducing Bode Call! With the opening ceremony of the Winter Olympics on Friday, we draw your attention to the most colorful personality among this year's athletes: Bode Miller. The downhill-skiing champ became particularly popular with media finger waggers last month after he told "60 Minutes," "There have been times when I've been in really tough shape at the top of the course ... Talk about a hard challenge right there  I mean, if you've ever tried to ski when you're wasted, it's not easy. Try to ski a slalom when the gates are [makes a wavy hand motion]. You hit a gate less than every one second, so it's risky, you know. You're putting your life at risk there. It's like driving drunk only there's no rules about it in ski racing."

And with that, sports columnists across the country went berserk, pundits everywhere leapt at the chance to reprimand him, and Miller appeared on the covers of Time and Newsweek -- beneath the cover lines "American Rebel" and "Miller Time," respectively. There was even talk by U.S. ski coach Phil McNichol that Bode might have to leave the team. Though Miller's personal sponsors, Barilla pasta, Atomic skis and Nike, voiced no concern about his comments, Miller later apologized to his supporters, stating, "Because of the way I made those comments in the '60 Minutes' interview, it caused a lot of confusion and pain for all those people, and obviously that is nothing I want to do, so firstly I'd like to apologize to them."

But there's something endearing about Miller's iconoclastic style, his hippie childhood, his love of organic potato farming (he owns a farm near his hometown of Franconia, N.H.) and, yes, his penchant for partying. Besides, it's not as if he's running for president (or getting arrested for DUI). But undoubtedly the scolds will keep heaping indignation until he has passed his last Olympic gate. And we're going to document their comments throughout the Games -- starting with the biggest bloviations to date:

"Miller's confession to skiing drunk was highly uncouth, and it makes you want to slap the guy upside the head. He clearly either fails to grasp, or just doesn't care, that like it or not, he's a role model."

"This is no longer about free speech. Nor is it about the moral issue -- is he or isn't he a role model? This is a practical issue. It's about business ... The team isn't footing the bill so Miller can party his way up to the starting gate."

"Brash, fast and stupid is no way to go through life ... Bode is skiing's reigning capitalist with a smart mouth and tie-dyed parents ... Boys will be boys. Ski bums will be ski bums."

"Miller's 'look ma -- no sense' interview went too far. Forget about all the 'role model to kids' stuff that has long since left the job description of sports icon. How about a role model to full-grown adults? Drunken skiing -- believe it or not -- is a serious problem on ski slopes from Vermont to Vail. Twenty-somethings careening down the slopes after a few brewskis at lunch cause serious injuries to themselves and others. All these yahoos need is a booze-hound hero."

"Miller's independent streak is deeply ingrained. He was raised in New Hampshire where his parents built a mountain home without electricity or indoor plumbing and home-schooled their son  Now, his remarks have gotten him in hot water, and he should make amends  If anyone knows how to get up from a reckless spill, it's Bode Miller."

"Tell me, please, why anyone would go before millions of viewers and brag about being 'wasted' in the start gate? Brag about wins and an unconventional style, or about an interesting upbringing, but racing while drunk? What he failed to address is whether or not he won while intoxicated. My guess is he didn't win. Miller has had his share of poor showings. As reigning downhill champion, he hasn't won a race this season."

"American skier Bode Miller may have tons of talent on the slopes, but he's boorish and a bad example off them. By boasting about skiing while drunk, he has violated a tenet of the U.S. Olympics team -- to represent his country and his sport honorably ... Miller is a role model to young men who love extreme sports, so be prepared for more stories about kids skateboarding while drunk, snowboarding while drunk or just being ridiculously drunk."

"Thanks, Bode. There's a seriously bored portion of America that might tune in to your races because you might be drunk. Meanwhile, the rest of us will just sit here, ashamed that the best American skier to come along in years has just committed PR suicide."

"I think it's one of those things where he really didn't realize the magnitude of his comments  this isn't a great message to send kids. And I think he realizes that now."

Morning Briefing:
Oops, she won't do it again: Britney Spears' mothering skills have been widely and harshly criticized since she was snapped by paparazzi driving with her baby on her lap Tuesday, but she hasn't helped her cause with the way she has handled the press attention since. After first blaming the paparazzi hordes for possibly impairing her judgment, she has now offered up an apology, sort of. "It's kind of like I made a mistake and so it is what is, I guess," she told Access Hollywood in an interview (QuickTime) during Mariah Carey's post-Grammys bash in Hollywood. "Being put in the situation that I was in, it was kind of bad with the paparazzi," she went on to explain. "Last week, my mom and me went out and they were on us really bad, so it's just, you do instinctively what you need to do." (Access Hollywood)

Profiles of the rich and famous, offspring edition: Among the many new possibilities offered by the Internet, this is but a small subset: the chance to embarrass your famous parents with your racy MySpace.com profile. The Lowdown has scanned the profiles posted by the offspring of Bobby Brown and Sean Combs, and found them quote-worthy. Brown's 16-year-old daughter lists her favorite drink as Smirnoff raspberry, and answers the question, "Have you ever danced like a whore?" with, "Yess all the time." Diddy's 11-year-old, meanwhile, lists his favorite rapper as 50 Cent, and his older brother says he thinks books are "retarted/Stupid." (Lowdown)

Page Six on Page Six: At least putting out a new magazine hasn't gone to the heads of anyone over at Page Six. Today the gossip column carries a bunch of bold-name reactions to its magazine launch under the heading "Million Readers Can't Be Wrong": "'It's fantastic,' Kelly Ripa told Regis Philbin. 'They should do it every week.' Movie mogul Harvey Weinstein said, 'The magazine looks great. Congratulations on a job well-done.' Tina Brown, who turned Vanity Fair into a success and then transformed The New Yorker, said, 'Raced through it cover-to-cover this morning and my 15-year-old daughter gave it total thumbs up, devouring it on the way to school. It's really lively, sharp and fun.'" (Page Six)

Also:
For the first time in 29 years, Barry Manilow has a record debut at No. 1 in the Billboard chart; his newly released "The Greatest Songs of the Fifties" has sold more than 156,000 copies since coming out on Jan. 31. (Associated Press) ... Neve Campbell just got engaged to British actor John Light; People magazine reports that to propose, Light got down on one knee and recited Shakespeare. (People) ... Oprah Winfrey's ever-expanding media empire has found new territory: The talk show hostess will be debuting with her own channel, "Oprah & Friends," on XM Satellite Radio in September. (E! Online) ... In Style presents the transformation of Paris Hilton from 1990 to 2006, in pictures. (In Style) ... Franklin Cover, the actor best known as the neighbor on "The Jeffersons" (in their deluxe apartment in the sky), died on Sunday at age 77. (N.Y. Daily News)

Money Quotes:
Bill O'Reilly on being asked whether he sees a bit of himself in Stephen Colbert of "The Colbert Report": "Yeah, sure. The formula of his program is, they watch the 'Factor' and they seize upon certain themes that work for him. He ought to be sending me a check every week, 'cause we're basically the research for his writers. I feel it's a compliment." (Newsweek)

Rush Limbaugh, talking to Fox News' Neil Cavuto, on Coretta Scott King's funeral service: "That funeral had everything in it. It had a 'Brokeback Mountain' moment in it, when Bishop Eddie [Long] embraced [President] Bush, or Bush embraced him, gave him a kiss on the cheek." (Lowdown)