Like our president, four TV shows are trying to scare us with tales of human hybrids. But what, exactly, are we so afraid of? 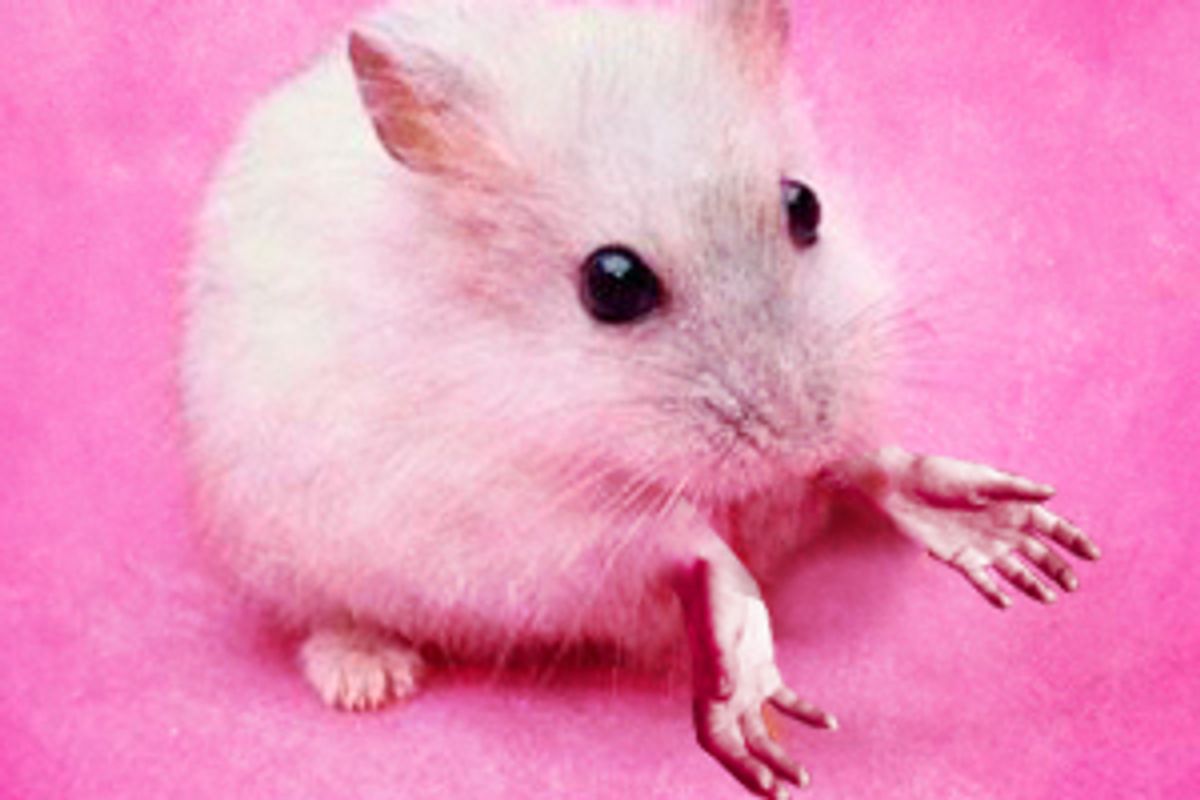 It's getting to be a tradition, the sci-fi moment in George W. Bush's State of the Union address. In 2004, the president advocated renewed efforts to explore the planet Mars. This year he called for government regulations to prohibit the creation of "human-animal hybrids." Now, it could be that Bush stumbled across an article like this one in National Geographic, describing successful efforts by scientists to create pigs with human blood flowing through their veins and fuse human cells with rabbit eggs, or Stanford University's potential project to "create mice with human brains." On the other hand, maybe the president's just been watching a lot of TV.

Last fall, the networks introduced a handful of new series with science-fiction elements, seen, inexplicably, by some observers as attempts to capitalize on the success of "Lost." It's true that a lot of the action in "Surface" -- in which a marine biologist, a working-class guy and a Spielbergesque kid search for the truth about a new species of sea monster -- takes place on or near the water. But "Surface," like "Threshold" (now canceled) and the Floridian gothic "Invasion," owes more to "The X-Files" than to the castaway adventuring of "Lost." All three shows feature covert government operations (in "Threshold" the heroes actually work for the government, which means they're in on the conspiracy). "Threshold" and "Invasion" both involve some kind of attack by aliens, and in "Surface," we recently learned that the sea monsters are the result of secretive corporate-sponsored genetic engineering.

But the hard kernel of anxiety in all of these shows is the same thing that's been freaking out George W. Bush: human hybrids. In "Threshold," the aliens employed an enormous, levitating, shape-changing snowflake thingy to hypnotize the crew of a freighter ship while emitting a sound capable of altering the genetic makeup of anyone who hears it. Now those "infected" by this improbable means roam the nation, trying to send the tone out via cellphone networks and causing traffic to jam up in the same pinwheel design that serves as the show's logo. Besides wanting to spread the tone and mess with your commute, the hybrids seem to have a generally homicidal attitude, superstrength and a tendency to light up like a pinball machine when shot. Their cells, when studied by Threshold team member and former NASA microbiologist Dr. Nigel Fenway, are revealed to contain triple-helix DNA. (For those who failed high-school biology, the DNA of all earth's living things is a mere double helix.)

In "Surface," a pubescent boy named Miles hatches a mysterious egg sac in his home aquarium. What comes out is an adorable (I swear) turtle/lizard creature he names Nim. Meanwhile, on the other side of the country, the adult leads incur governmental wrath with a renegade underwater research project and manage to videotape full-grown specimens nursing acres of egg sacs on the ocean floor. Even the giant versions of these sea monsters are kinda cute, with round heads and big, puppyish paws, but except for Nim, now thoroughly bonded with Miles, they're aggressive man-eaters. A school of the young critters attacks Miles, and the bites they give him cause a mysterious fever that almost takes his life before he's miraculously healed by Nim. But now Miles has the same weird effect on electrical appliances that Nim does, his pupils change shape and he turns uncharacteristically violent when hassled by the school bully. Pretty soon, a mob of suburbanites waving pitchforks gathers outside his family's McMansion.

"Invasion" has the murkiest hybrid premise of all. During a hurricane, lights fall from the sky into the waters outside a small Floridian town. Certain residents come to consciousness after the storm, lying naked in the reeds or water, with no memory of the previous night. They form a support group at the local church but never seem to get around to comparing detailed notes. Do they realize that they're all unduly fascinated by running water, and that some of them can actually stay underwater for an hour or more without needing to breathe? Tom, the town's sinister sheriff -- married to Mariel, the hero's ex-wife -- seems to know more than he's saying, and the Army is up to something in the remote reaches of the swamps.

What makes "Invasion" the strongest of the three shows is the way it uses the alien infiltration as a metaphor for the uneasiness of the post-nuclear family. Tom has not only taken Mariel away from her former husband and kids, he's actually slowly changing her into another, alien being. The series' hero, studly park ranger Russell, and his crankish brother-in-law discover the corpses of people who are supposed to be still alive, and they also find the remains of bizarre, squid-like creatures fused to human bodies. But if the aliens have entirely replaced Mariel's body with one of their own, she isn't really aware of it; like the infected in "Threshold" (if not as quickly), she starts out thinking she's her old self and only gradually feels the pull of another identity.

Even the scheming, berserker hybrids of "Threshold" retain all their old memories and skills, though they do use them in service of their unfathomable new agenda. The important thing about all these hybrids is, whatever their hostility to the human race (the squid people of "Invasion" are known in some instances to slaughter their own families), they have superpowers. They can breathe water, communicate telepathically, heal rapidly, use their fists as stun guns, short-circuit the fuse box and fight like hell. Their motives are obscure, but they're stronger than we are in just about every way.

Even "Battlestar Galactica," TV's smartest, most sophisticated science fiction series, has a hybrid, a fetus conceived by a human father and a cylon mother. Because nothing is ever simple on "Galactica," the cylons, created by robots who were themselves created by humans, are almost impossible to distinguish, inside and out, from real people. The cylons have wiped out all but a small, fugitive remnant of the human race, who insist on calling their enemies "machines" (or, sometimes, "toasters"). But even the victims of the cylon genocide have a hard time telling the difference. And while the baby carried by the cylon Sharon isn't even born yet, it's already demonstrated at least one superpower: an injection of the fetus' blood into the body of humanity's dying leader, President Laura Roslin, cures her of cancer.

It's been said that the science fiction of a given period mirrors the anxieties we have about the dominant technology of that period. Godzilla, the atomic age's favorite monster, was the product of radiation; the Terminator and other cyborgs were the computer era's nightmare vision of what thinking machines might become; and now, in a time of cloning and the Human Genome Project, we tell stories about genetic engineering. But science fiction whispers of social and political fears, as well as scientific ones. The pod people of "Invasion of the Body Snatchers" worked as metaphors for both the mindless cogs of the Soviet state and suburban '50s conformists. And personally, I've always thought that the ravenous, dull-witted and lemming-like mobs of the undead in zombie movies speak to the particular horror inspired by other people in an increasingly crowded world.

In a way, genetic manipulation -- albeit to a much less sensational degree -- has always been with us: It's what dog breeders and tomato growers have done for centuries. Even human-animal hybrids aren't really new. In fact, I've met one: a friend's father who just had a pig's heart valve transplanted into his body. Still, most Americans are only dimly aware of what genetic engineers are up to or how genetic engineering works. (It would be hard to significantly alter a full-grown human being by fooling around with his or her genes, for example.)

But if human-animal hybrids are not part of most people's lives or consciousness, there is a kind of hybridization we see every day, happening more and more often all around us, and one that once struck Americans as every bit as threatening as communism. What was once considered an intolerable transgression -- the mixing of races -- has become not just commonplace but overt. More and more people describe themselves as multiracial, even if the option to do so only became officially available with the 2000 census. When a character in "Surface" rants about genetic engineering, saying, "What they're doing over there is unnatural, immoral, evil," it isn't hard to hear echoes of what, not that long ago, many Americans said about the interracial couple down the street.

In fact, some people probably still say this sort of thing today. Although scientists keep telling us that any genetic differences among the races are so trivial as to be entirely meaningless, we've believed in racial categories so hard for so long that the accelerated blurring of those boundaries makes us uneasy. In the 1990s, for example, depictions of black-white sex used to be one of the elements in an adult video that rendered it especially vulnerable to obscenity prosecution -- along with blasphemy, bondage and sadomasochism.

It's not only bigots whose ideas about racial identity are being unsettled, either, and some of the unsettling is retroactive. The noted African-American writer and activist Thulani Davis, in her new book, "My Confederate Kinfolk," describes finally getting around to researching the people she's related to through her white great-grandfather. She finds her own hairline in old photos of those relatives and learns that many of the women in that family had theatrical and writerly ambitions much like her own. Though she has always considered herself simply a black woman, she's prompted to wonder if some of the most cherished parts of her identity might come from her white ancestors. In the PBS television series "African American Lives," state-of-the art DNA testing now being used to track the remote genetic heritage of any individual revealed that Henry Louis Gates Jr., Harvard University's chair of African American Studies, is half African and half European.

"Racial classification in the U.S. is now in a phase of unprecedented instability and uncertainty," the former director of the U.S. Census Bureau said in a speech at Harvard two years ago. Race itself, for all our efforts to classify it, has never been all that stable or certain. The difference is, more of us have come to embrace that instability. The specter of "amalgamation," once used to horrify and scandalize 19th century whites, is giving way to the belief that race-mixing will make us better, just as merging our genes with the aliens of "Invasion" could make us amphibious. After all, if most people believe that mutts tend to be tougher, smarter and fitter than purebreds, surely the same principle applies to people, too?

Perhaps the future belongs to a super-race of brown-eyed, caramel-skinned paragons, a world of Tiger Woods and Halle Berrys, good-looking and gifted. If, in order to fix the mess we've made, they need to get rid of the rest of us, the degenerate leftovers of an outdated notion of humanity, isn't that for the best? They'll need to be at the top of their game if they're going to defeat all those giant mutant lizards and killer cyborgs.