At this year's Conservative Political Action Conference, Boone, Cheney, Coulter and other luminaries of the far right gathered to glory in their victories over liberal America. 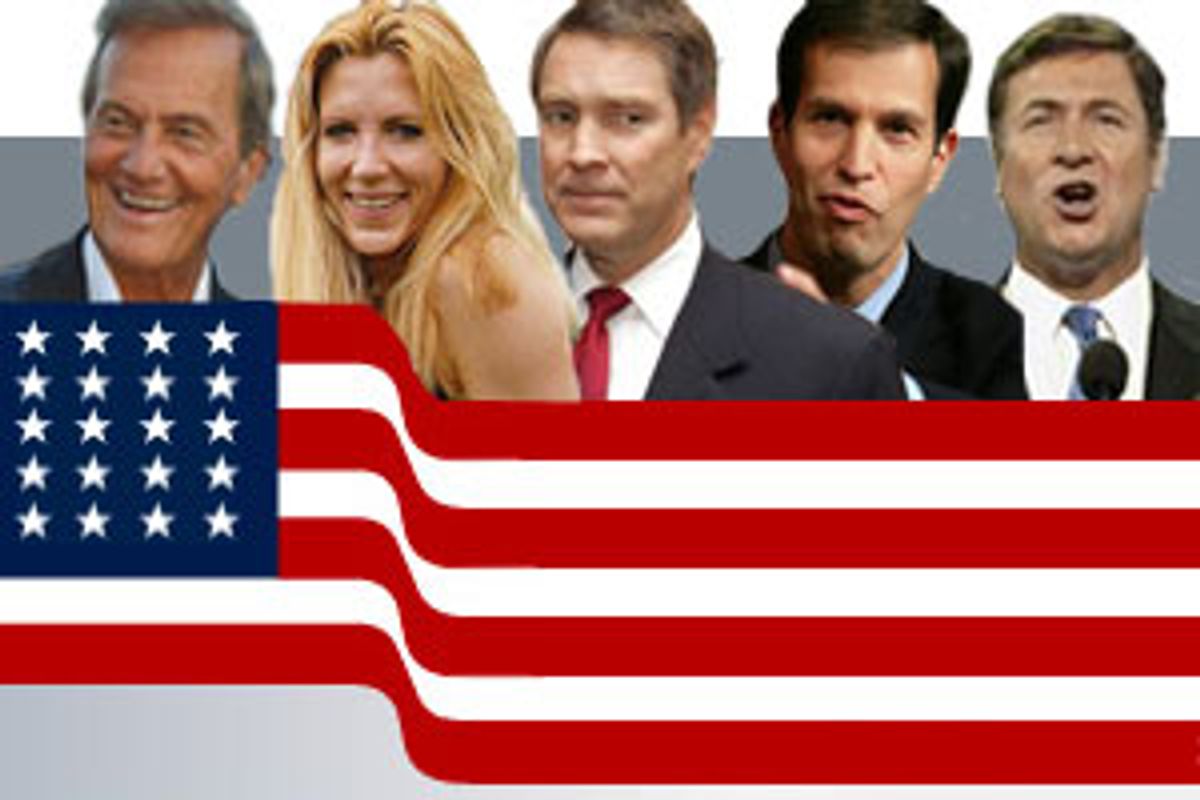 By the time Pat Boone began singing a karaoke version of his own ballad "Under God," several journalists in the back of the ballroom had already poured themselves glasses of pilfered chardonnay. The U.S. Smokeless Tobacco Co. donated hundreds of bottles of the stuff to the Conservative Political Action Conference, a petty bribe from a leading purveyor of mouth cancer to the leading lights of the right wing. At the time, the journalistic ethics of sniping a snuff company's right-wing booze did not seem so important.

The Jumbotron screens on both sides of the stage flashed a montage of American flags, sunsets and crashing waves. Boone, who tans his face the color of a penny, rhymed the word "God" with the word "God" as a prerecorded chorus of children's voices played in the background. About an hour earlier, Vice President Dick Cheney had appeared from behind the blue curtains to wow the thousand or so diners with a bulldog version of the president's last State of the Union, bluntly daring Democrats to continue opposing the war in Iraq. The night's emcee followed with a joke about how French people screw in light bulbs. Now the diners were digging into their chocolate raspberry torte and enjoying a musical interlude. Next came Virginia Sen. George Allen, a Southerner who once hung a decorative noose from a tree in his law office. He was going to tell the diners why he should succeed George W. Bush as president of the United States. It was, by any rational measure, a good time for a drink.

The newspaper reporter sitting to my left leaned over to acknowledge the obvious. "They do need a new act," he muttered. But do they? The crowd of intellectuals, donors, students and operatives represented at this annual conference had overseen a string of three consecutive electoral victories. They controlled much of the House and the Senate. They had easy access to the White House, and a growing portion of the Supreme Court. Along the way, they might have betrayed some of their founding principles, by expanding the size of government at a record rate and exploiting the perks of power. Yet despite it all, they had good reason to celebrate. "Through every path we've trod," Boone crooned, "we can now live in freedom under God."

With its eccentric mix of power brokers and true believers, the annual CPAC is an odd duck, even by the standards of Washington's never-ending political conference cycle. In recent years, it has been seen by the outside world as a time of celebration for the nation's right-wing leaders, a chance for sitting politicians to rally with the base. Indeed, the event draws big names. Over three days, a cavalcade of the powerful would pass through the basement ballroom of the Omni Shoreham Hotel -- not just Cheney and Allen, but Republican Party chairman Ken Mehlman (to bait John Kerry, again), Pennsylvania Sen. Rick Santorum (to bait Hillary Clinton, again), Senate Majority Leader Bill Frist (to condemn gay marriage, again) and Ambassador John Bolton (to bait the U.N., again). These headliners drew the nation's top political reporters, but they represented only a sliver of the action.

Of the 4,000 or so who show up for the conference, about half are overdressed college kids in pearls, blue blazers or striped ties, young Republicans who come to D.C. for the chance to flirt with each other, watch Ann Coulter act outrageous, and attempt to sneak cases of Bud Light into their hotel rooms -- the kind of students that collect internships like Mardi Gras beads. Many others were older members of the obsessive political right: the Navy chaplain who went on a hunger strike, the militant Hillary haters, the self-published authors, the talk radio groupies, and one or two pot-smoking libertarians. In the exhibition hall, Lockheed Martin provided an F-22 Raptor flight simulator (the red button drops the bomb), the Objectivist Center built a shrine out of Ayn Rand book covers, and someone bid up the silent auction for lunch with Grover Norquist to $300.

The panels on states'-rights federalism, the dangers of social responsibility and voter fraud drew only piddling crowds, because CPAC is about preaching to the converted, not learning something new. But when Coulter took the stage, there was barely any standing room. She is, it must be said, less impressive in person than her reputation would suggest -- offensive, outrageous, long and blond, but also bland and obvious. The fact that her shtick has changed so little since 2002 reminds one less of Eugene McCarthy than of Bobcat Goldthwait.

That said, she did not disappoint her fans, coming to the stage under the thumping dance house beats to deliver a string of punch lines. Democrats: "Someday they will find a way to abort all future Boy Scouts." College professors: "sissified, pussified." Harvard: "the Soviet Union." John Kerry: the other "dominant woman in Democratic politics." Her post-9/11 motto: "Rag head talks tough, rag head faces consequences." For good measure, she threw in a joke about having Muslims burn down the Supreme Court -- with the liberal justices inside.

Then came questions. A young woman asked Coulter to describe the most difficult ethical decision she ever made. "There was one time I had a shot at Bill Clinton," Coulter said. A brave young man rose to explain that the Republican Party was trying to recruit Muslim voters. "Please, please, please don't say rag head," he pleaded. Her comeback was swift: "Yeah, I made a few jokes at Muslims. They killed 3,000 Americans." Applause. The next guy to ask a question at the microphone told Coulter his room number at the Marriott.

A few hours earlier, those in the ballroom had been treated to an even more bizarre spectacle when two pro-marijuana groups -- at least one of which is funded by billionaire Peter Lewis, bane of conservatives everywhere -- staged a debate with a former pro-football player over the merits of smoking dope. "You want the government involved so bad," thundered Ethan Nadelmann of the pro-pot Drug Policy Alliance. "What about the market ... What about having confidence in people's basic sense of freedom and good judgment."

"We got enough lazy people in America," objected Gary Cobb, a sports radio host, who formerly played for the Dallas Cowboys, Detroit Lions and Philadelphia Eagles. A few minutes later, the anti-weed Cobb admitted he had smoked a few joints in his time. That was about as sophisticated as the debate got. At another session, Steve Milloy, the Fox News commentator and ExxonMobil grantee, announced, "We don't know that humans are adversely affecting the climate." He promised to show up at a General Electric shareholder meeting to protest any actions the company takes to reduce greenhouse gases.

A 1:30 p.m. session on "Marriage in the States," which was supposed to include Kansas Sen. Sam Brownback, featured instead a self-described former homosexual named Alan Chambers. He said sodomy was like fast food: "It will kill you." He was an expert because he had lived through the torment of gay lust, enduring "a never ending cycle of cravings and nourishment ... an endless treadmill of faceless encounters, broken hearts and unmet dreams." His research on the gay lifestyle had also taught him that gay people do not really want gay marriage (it was the liberal media) and that "lifelong homosexual relationships are not possible." Then he declared, in the struggling voice of a recovering alcoholic, "Today I stand before you as a heterosexual man ... who now lives an unparalleled life of happiness and satisfaction." He said there were hundreds of thousands like him.

A still-gay member of the audience, who said he belonged to the Log Cabin Republicans, rose in protest. "How can you speak for all homosexuals?" he asked. "As a gay person I would like to know how I am anti-family." Chambers let one of the other panelists take the question.

National political protests and conferences on both sides of the political spectrum have a tendency to bring out wingnuts and clowning crusaders. As a rule, such theatrics are of no interest to the networks, the Associated Press or the New York Times, which came to CPAC just to cover the big heavies like Cheney and Mehlman, hoping to discern in the variations of the stump speech some bit of news. When Cheney said that in the 2006 elections "people need to know just how we view the most critical questions of national security," the Washington Post declared it a watershed. It was, wrote a Post reporter, "the closest a top White House official has come" to making the issue of wiretapping a "political matter." Never mind the straight converts or the pot-smoking football players.

I was most interested in hearing Sen. Allen's stump speech, which he has been refining on his recent trips to New Hampshire. As a stump speaker, he has a friendly, neighborly delivery, and in recent years he has been cleaning his closet of his own skeletons, even introducing a bill to apologize for the Senate's once blocking anti-lynching legislation. In an open field for 2008, Allen is spoken about by many conservatives as the next best thing to a resurrected Ronald Reagan. In case anybody didn't know that, Allen mentioned the former president so many times I lost count. "I think we ought to look back at history, at Ronald Reagan, the person who motivated me to get involved in politics ... Ronald Reagan changed the dynamics of the Cold War ... Ronald Reagan persevered ... As always, Ronald Reagan was right." The rest blurred together. Like almost every presidential candidate, he promised to double the number of engineers and be strong in the war on terror.

Like the Senate's Dr. Frist, Allen has a tendency to use biographical metaphors. For Allen, it's all about football, owing to his own brief time on the gridiron and the fact that his father, of the same name, coached the Washington Redskins and the Los Angeles Rams. He kept calling the conventioneers his "team." At about that point, I looked around for the journalists, the members of my "team," whom I had seen stealing sips of chardonnay a few minutes earlier. But they had already left, gone home to their families. Almost three years out, the campaign season was not yet in full swing.