Saber-rattling Evan Bayh has joined Hillary Clinton in running to Bush's right on Iran. Will this tough stance pay off in 2008 -- or backfire? 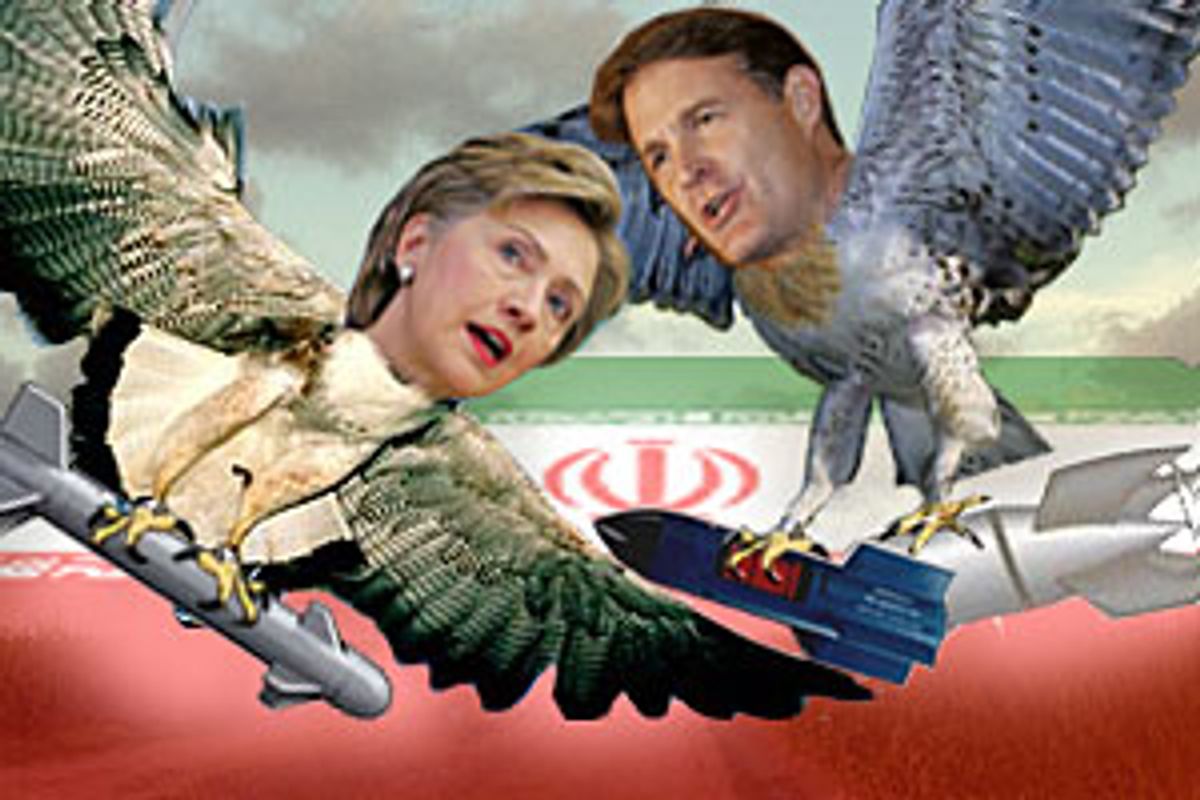 Indiana Democrat Evan Bayh was well aware of just who was at a neighboring table in the Senate dining room last Thursday as he tried to explain why he advocates force as a last resort to halt the Iranian nuclear program. In the corner was John McCain, a hard-liner on Tehran who has taken the lead in stressing that "the military option cannot be taken off the table."

Both senators are probable presidential contenders (McCain the favorite in the Republican winter book and Bayh one of several centrist Democrats vying to become the pragmatic alternative to Hillary Clinton). And it does not take much of a leap to imagine Bayh and McCain sounding similar refrains in the New Hampshire primary as Iran replaces Iraq as the dominant foreign-policy issue of the 2008 campaign.

McCain's no-nukes-nohow position flows naturally from his promise of "rogue-state rollback" in his 2000 race for the White House. But Bayh's stance symbolizes something simultaneously politically intriguing and potentially dangerous for the out-of-power party. For suddenly the Democrats see in Tehran's ill-concealed quest for nuclear weapons an issue that allows them to boast, "I ran to Bush's right on national security."

As we talked about Iran over lunch, Bayh took pains to underscore his "awareness that the use of force is not a panacea and there will be adverse consequences to that as well." But the two-term senator and former governor also stressed, "We're talking about nuclear weapons in the hands of a state that aids and abets terrorism, with an apocalyptic and unstable leader who is also deeply hostile to us." Bayh may have been picturing what it might be like to sit in the Oval Office weighing conflicting recommendations about how to forestall a nuclear-armed ayatollah when he said with a sigh, "It's going to be a tough one."

Bayh may be a bit more open than other Democrats about discussing the implications of militarily confronting Iran, but he is far from alone in his get-tough stance. The always-square-in-the-middle-of-the-road Sen. Clinton declared in a foreign-policy address at Princeton last month, "We cannot take any option off the table in sending a clear message to the current leadership of Iran -- that they will not be permitted to acquire nuclear weapons." It is easy to draw such lines in the dust three years before any Democratic president would be forced to act on them, but there is also a risk that such threats may ultimately sound as hollow as demanding Osama bin Laden "dead or alive."

Just as Iraq was always a neoconservative obsession, Democrats can easily get caught up in an I-told-you-so single-mindedness about Iran. Even early Iraq war critics like Howard Dean always took pains to ridicule the president for ignoring the threat from the other two charter members of the Axis of Evil. With the administration only now belatedly remembering that Iraq is not the only four-letter-word country in the region -- and still looking to, yes, Old Europe for leadership on the nuclear issue -- it is easy for Democrats to ridicule the spineless diplomacy of Condi Rice.

Democrats like Bayh can find support for their unyielding approach to Tehran from some foreign-policy veterans in the party. Sandy Berger, Bill Clinton's national security advisor, told me in an interview, "There are a lot of downsides to force, but you can't eliminate it as an option because we can't tolerate a nuclear Iran." Tipping his hat to Bayh, Berger said, "I think this is a situation where Evan's hawkishness serves him well."

At a time when former Virginia Gov. Mark Warner is winning the new-face-in-town buzz as a presidential prospect, Bayh advanced himself in the 2008 mix with a Feb. 2 appearance at the Center for Strategic and International Studies. Normally, a Democratic senator giving a luncheon global-affairs address at a D.C. think tank is an opportunity for graduate research into adult sleep patterns. But Bayh pulled off a feat as unlikely as C-SPAN sponsoring a wet T-shirt contest by delivering a foreign-policy talk that people other than Senate staffers actually noticed. It was here that Bayh attracted attention by demanding U.N. economic and political sanctions against Iran -- and pointedly adding, "If its nuclear activities persist, there will be consequences beyond that, including the use of force."

Bayh is a moderate in both ideology and style, but something about this Feb. 2 speech caught the wave. Maybe it was Bayh's in-your-face challenge to Karl Rove's claim that the Democrats were weak on national security or the senator's muscular language -- "This administration has undermined the nation's security and bungled the war on terror." The New York Times highlighted Bayh's critique in its monthly installment of that journalistic evergreen: Whither the Democrats? Senate Minority Leader Harry Reid, who circulated excerpts to all his Democratic colleagues, went out of his way to praise Bayh's speech last Friday in a meeting with left-liberal reporters.

There is an understandable hunger in the Democratic Party for a national-security issue that makes the Bush administration look like incompetent wimps. Small wonder that Berger views Iran as that rare situation "where good policy and good politics converge." But, in truth, there is also the awkward reality that threatening military action against Iran only works if Tehran believes the bluster. As Ivo Daalder, a Clinton national security staffer now at the Brookings Institution, put it, "I'm a pretty hawkish person, but I don't think there is a military option with Iran."

Sen. Joe Biden, another potential Democratic presidential candidate, made a similar point about the limits of "military action" in an NPR interview last week. These days it is near heresy for any Democrat with national ambitions to applaud any aspect of Bush foreign policy. But Biden bravely abandoned the easy political road by also praising (yes, praising) the administration for recently switching to "the correct policy with regard to Iran," which is a patient effort through diplomacy to develop an international consensus in favor of sanctions.

Ray Takeyh, an Iran policy expert at the Council on Foreign Relations, is skeptical about both military action and easy rhetoric that threatens it. As Takeyh points out, the Democrats have erred tragically in the past by trying to out-hawk the Republicans. "You're replaying the JFK card," he said. "In 1960, Kennedy tried to get to Nixon's right on Cuba. The problem is that once Kennedy became president, he was locked into the Bay of Pigs invasion."

Bayh, Clinton and the other all-options-on-the-table Democrats have not yet Krazy-glued themselves into any precipitous course such as, say, threatening airstrikes against Iranian nuclear facilities. But in the 33 months (yes, we are already counting down) to the 2008 election, there will be many tempting opportunities for national-security Democrats to ratchet up their guns-blazing rhetoric on Iran. But the last thing the Democrats need -- especially when so many of them proved so compliant for so long over Iraq -- is to give way to I-ran-amok posturing in their quest for the White House.