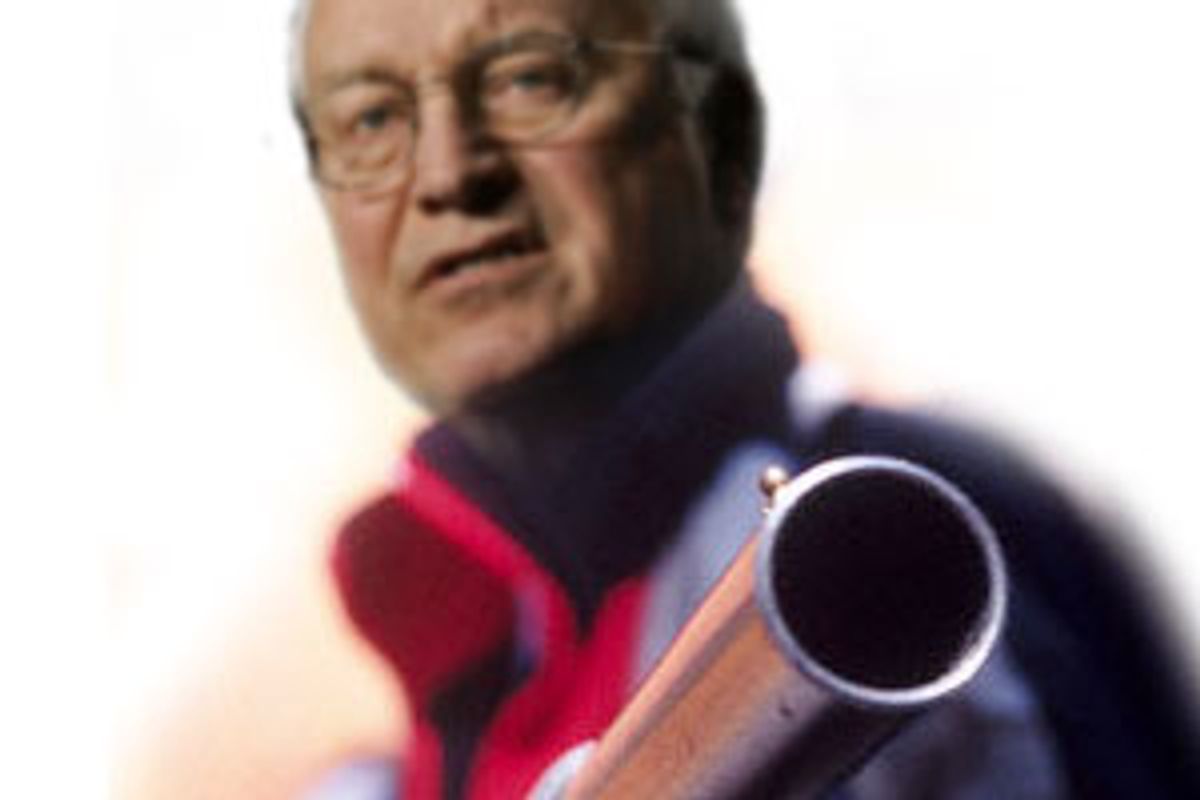 From time to time, the vice president will shoot a man. This is not unusual nor is it cause for alarm. Vice presidents throughout history have shot men. Vice President Gerald Ford shot six men in one day. Vice President Dan Quayle once actually shote a man.

That these incidents have heretofore gone unreported only shows the good work this office has done throughout the years. That Vice President Dick Cheney's recent shooting was reported, by contrast, represents a failure that we prefer not to see repeated.

Therefore, measures to manage the fallout of this shooting must be taken, and certain future precautions must be considered.

Here are some guidelines.

However, in some cases, a visit may be necessary. If the vice president's schedule cannot be rearranged to place him on the Space Shuttle, remember:

Bringing flowers sends the wrong message. Instead, bring something jokey and pointless, like beef jerky or a bag of Fritos. In fact, bring a bag of Fritos and a little joke, one that will recall President Ronald Reagan, something like, "Gee, you forgot to duck." What you want to convey is a manly, gee whiz sorry sort of jokey affection. Warmth, by contrast, is easily misconstrued.

In any event, as long as the victim does not die, the opportunity to send a message ought not be overlooked. Keep in mind: Getting shot is not the end of the world. What's a little birdshot in the face? It's important for us to join the National Rifle Association in getting this message out, especially now, as there is excessive concern about various people being shot around the world.

If for some reason the vice president shoots a man and he dies, then the issue of funerals arises. Funerals, when seen on TV, tend to remind viewers of death. Death is off-message. It is not something with which to associate the vice president. (Hunting is on-message, although not the hunting of a 78-year-old lawyer from Austin.)

If it should become necessary for the vice president to attend the funeral of a man he has shot, he ought to dress in camouflage to plant in the mind of the viewer the idea that the shooting occurred in combat.

It was suggested in our discussions that the vice president henceforth carry a shotgun at all public appearances. The possibility of him taking a potshot, the reasoning goes, would limit press attendance at routine events. It would also increase efficiency at press conferences by limiting questioning time, as questioning would be conducted from behind one-inch-thick steel-plate barricades. This would also provide a credible pretext for the vice president to claim that he "did not quite catch that question," daring the questioner to expose his head and ask it again.

The legality of this proposal is currently under review but it is believed that irrespective of legal precedent, the president has the inherent right to arm the vice president with a shotgun whenever he feels it is necessary to do so.