The White House's secretive response to Cheney's misfire cannot be understood apart from the society of Texas royalty. 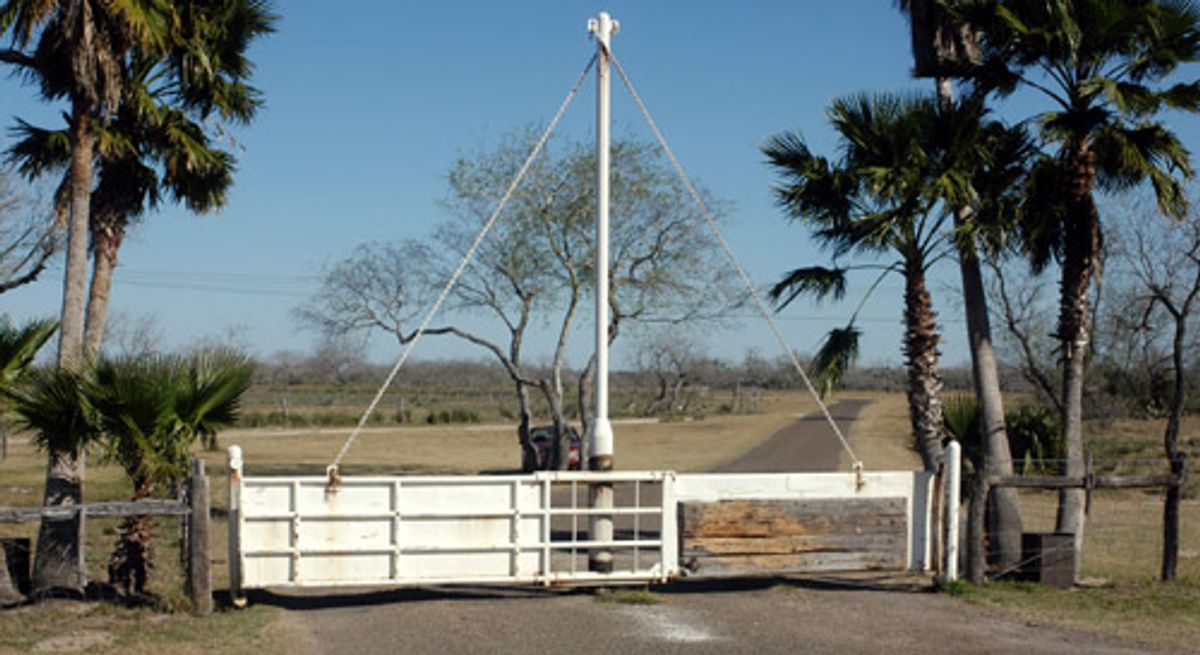 In the original account authorized by Vice President Dick Cheney of his shooting of Harry Whittington, given by Katharine Armstrong, heiress and hunting companion, to the Corpus Christi Caller-Times and later elaborated on to other news outlets, the 11 members of the hunting party set off on the morning of Feb. 11 in two trucks for the wilds of the 50,000-acre Armstrong Ranch in search of quails. After lunch, whose menu was described as antelope, jicama salad, bread and Dr Pepper, the hunters divided into two groups. Cheney went off with Armstrong; Pamela Pitzer Willeford, the U.S. ambassador to Switzerland and Liechtenstein; and Whittington.

At dusk, Whittington, a 78-year-old Austin lawyer and local Republican fixer, shot a bird and went to retrieve it behind the others. Hearing rustling in the bushes, Cheney, who has lately been using a cane in public and wearing two different shoes for comfort, reportedly quickly swiveled 180 degrees, 28-gauge shotgun in hand, and fired at what he believed were quails, but instead hit Whittington, 30 yards distant. "He got peppered pretty good," Armstrong said. "There was some bleeding, but it wasn't horrible. He was more bruised." The circumstances of this hunt were different from Cheney's previously celebrated 2003 hunt at the Rolling Rock Club in Pennsylvania, where he, Associate Supreme Court Justice Antonin Scalia and eight others killed 417 pheasants and an unknown number of mallard ducks specifically raised for the purpose of being herded before the hunters to shoot. At that time, Cheney released to the press the information that he had personally killed 70 pheasants. In the less controlled environment of the Armstrong Ranch, the only known target he hit was Whittington.

The details of the story related by Armstrong, however, defied practical experience and were contradictory. Armstrong told NBC News that while she believed that no one was drinking alcohol, beer may have been served at lunch. "There may have been a beer or two in there," she said, "but remember not everyone in the party was shooting." Armstrong's statement about beer appeared on the MSNBC Web site, but was subsequently and inexplicably scrubbed. Dr Pepper replaced beer in later versions of Armstrong's telling. On the Hunting Accident and Incident Report Form of the Texas Parks and Wildlife Department, the shooter, Richard B. Cheney, checked the "No" box for the question, "Under the apparent influence of intoxicants or drugs?" But in an interview with Fox News Wednesday, Cheney admitted to having a beer earlier in the day, contrary to his statement to Texas officials.

The murky method by which Cheney decided to handle the disclosure of the shooting was guaranteed to raise questions about the incident. He behaved secretly, evaded standard protocol and brushed aside his obligations to the law. Unless Whittington dies, precipitating a grand jury probe, requiring witnesses to testify separately under oath, the true story may never be known, despite Cheney's Fox interview.

Whether or not the exact facts of the case are ever conclusively established, what happened at twilight in the south Texas brush has revealed the hierarchy of power within the Bush White House and the interests of those who wield that power. The surreptitious handling inside the White House of the shooting, moreover, cannot be understood apart from the society of Texas royalty and the ambitions of those, like Cheney and Karl Rove, who aspire to it. None of it is metaphoric.

About an hour after the shooting, an unidentified traveling aide of the vice president's called the White House Situation Room, which put him in touch with Chief of Staff Andrew Card. Why a call would be routed through the Situation Room, which receives and transmits only national security information, rather than the very capable and secure White House switchboard, remains mysterious. Card was deliberately misled, told only that there was an accident in Cheney's party, not that Cheney was involved. The vice president's staff obviously felt no need to inform the president's chief of staff of the true facts of the matter. Why Card was deceived is also mystifying, except insofar as it reflects the vice president's instinctive view of him as someone to be routinely stepped over and around. Card, acting responsibly, promptly called President Bush, who as a result was momentarily kept in the dark. Confusing Card was a way of managing Bush, and yet ...

Enter Rove. Within minutes of the call to Card, the president's chief political advisor and deputy chief of staff spoke with Katharine Armstrong, an old friend of his, who told him that Cheney had shot Whittington. Who initiated this conversation is unknown. In any case, Rove, not the duped Card, informed the president of what had actually transpired.

White House press secretary Scott McClellan was left out of the loop until the next morning. Instead, Armstrong, not anyone from the White House, disclosed the news that the vice president had shot Whittington to her local newspaper. It seems fair to infer that Cheney left Rove the task of coaching her. Twenty hours after the accident, the Corpus Christi Caller-Times printed its report; then it slowly filtered to the national press corps, which was never alerted by the White House.

Armstrong's account blaming the victim bore the mark of a classic Rove-engineered statement. No one at the White House had yet to say a word. The president, though he was well aware, made no query that would have ensured that in this extraordinary event the White House was operating properly and according to the letter of the law. Whether ignorant or informed, he remained passive, deferring to Cheney and Rove.

Both the vice president and the deputy chief of staff, as it happens, owed their previous, lucrative jobs in the private sector to their relationships with the Armstrong family. Anne Armstrong, Katharine's mother, was on the board of Halliburton that made Dick Cheney its chief executive officer. Tobin Armstrong, Katharine's father, had financed Karl Rove & Co., Rove's political consulting firm. Katharine herself is a lobbyist for Houston law firm Baker Botts, a major Texas power broker since it was founded in the 19th century by the family of James A. Baker III, the former secretary of state and close associate of George H.W. Bush's.

Katharine Armstrong took up lobbying after her recent divorce. Her contracts include Parsons, a construction firm that has done work in Iraq, among others. Her business partner, Karen Johnson, a close friend of Rove's, does extensive business with the State Department, the U.S. Agency for International Development and defense contractors. But Armstrong's protestations to news media that she does not lobby Cheney should probably be taken at face value given her background.

Katharine Armstrong is linked to two family fortunes -- those of Armstrong and King -- that include extensive corporate holdings in land, cattle, banking and oil. No one in Texas, except perhaps Baker, but certainly not latecomer George W. Bush, has a longer lineage in its political and economic elite. In 1983, Debrett's Peerage Ltd., publisher of "Debrett's Peerage and Baronetage," printed "Debrett's Texas Peerage," featuring "the aristocrats of Texas," with the King family noted as the "Royal Family of Ranching." The King Ranch, founded by Richard King in 1857, is the largest in Texas, and its wealth was vastly augmented by the discovery of oil on its tracts, making the family a major shareholder of Exxon. The King Ranch is the model for Edna Ferber's novel of Texas aristocracy, "Giant."

John B. Armstrong, a Texas Ranger and enforcer for the King Ranch, founded his own neighboring ranch in 1882, buying it with the bounty of $4,000 he got for capturing the outlaw John Wesley Hardin. In 1944, almost inevitably, the two fortunes became intertwined through marriage. Tobin Armstrong's brother John married the King Ranch heiress, who was also a Vassar classmate of Tobin's wife, Anne, who came from a wealthy New Orleans family.

The Armstrong Ranch developed far-flung holdings in Australia and South America. Meanwhile, President Ford appointed Anne, a major Republican activist, U.S. ambassador to the United Kingdom, and President Reagan appointed her a member of the President's Foreign Intelligence Advisory Board. U.S. Sen. Kay Bailey Hutchison is reportedly Anne's best friend, and Anne was instrumental in launching her political career. Tobin, for his part, worked as an advisor to Texas Republican Gov. William Clements, where he first encountered the young Karl Rove and decided to give him a helping hand when Rove struck out in the political business on his own.

The Armstrong family's Republican connections have continued and strengthened down to the latest generation of Bushes. Gov. George W. Bush appointed Anne a regent of Texas A&M University and Katharine a commission member of the Texas Parks and Wildlife Department, the agency that filed the report on the Cheney shooting. At Tobin's funeral last year, Cheney delivered the eulogy.

While the incident continues to unfold, the Bush administration is pressing a new budget in which oil companies would receive what is called "royalty relief," allowing them to pump about $65 billion of oil and natural gas from federal land over the next five years without paying any royalties to the government, costing the U.S. Treasury about $7 billion. For Texas royalty like the Armstrongs, it would amount to a windfall profit.

The curiosities surrounding the vice president's accident have created a contemporary version of "The Rules of the Game" with a Texas twist. In Jean Renoir's 1939 film, politicians and aristocrats mingle at a country house in France over a long weekend, during which a merciless hunt ends with a tragic shooting. Appearing on the eve of World War II, "The Rules of the Game" depicted a hypocritical, ruthless and decadent ruling class that made its own rules and led a society to the edge of catastrophe.