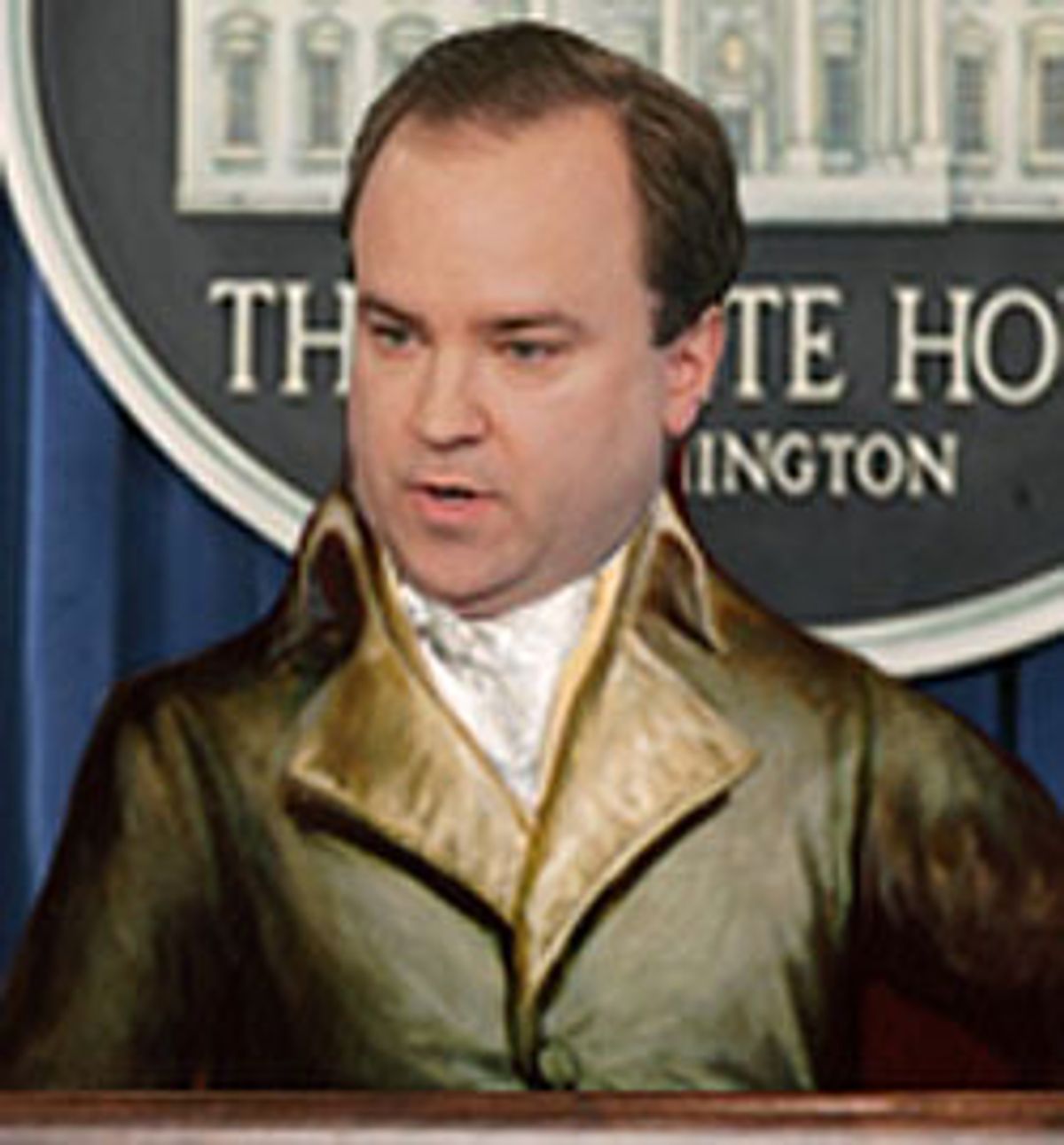 MR. RODNEY: Good afternoon, I have a few announcements.

President Jefferson has sent a letter to the Bey of Tunis stressing that there must be no interference with shipping in the Mediterranean Sea. To quote the letter: "If this piracy continues, I can assure you that all options, including the use of force, will remain on the table."

President Jefferson has also dispatched a condolence note to the family of Alexander Hamilton. The former secretary of the Treasury died suddenly yesterday, apparently from a self-inflicted gunshot wound.

Now I will take your questions.

Q: Elbridge, what do you say to reports that Vice President Aaron Burr killed Mr. Hamilton in a duel?

MR. RODNEY: After a tragic occasion like this, I will not respond to scurrilous rumors. Please have some consideration for the feelings of the Hamilton family.

Q: Where is Vice President Burr at this moment?

Q: Will you make Aaron Burr available for questions?

MR. RODNEY: That is something best raised with the vice president's staff.

MR. RODNEY: Like all supporters of the Second Amendment and the right to bear arms, the vice president appreciates a well-made firearm. It is my understanding that Vice President Burr uses his pistols primarily for quail hunting.

Q: What do you mean by "primarily for quail hunting"?

MR. RODNEY: Here we go again -- parsing every word. I said "primarily" only because I was not present every time these pistols were fired.

Q: When was the last time the vice president's pistols were fired?

MR. RODNEY: Haven't we exhausted this topic? A great man lies dead. The Hamilton family is devastated. The nation grieves. So let's turn to other issues. Sanjay?

Q: The Jaipur Times has reported British troop movements in the area of Kashmir. Does President Jefferson have a position on this affront to Kashmiri sovereignty?

MR. RODNEY: The United States firmly supports a demilitarized Kashmir. Secretary of State Madison recently called upon the international community to protest British treaty violations on the Indian subcontinent. If there is interest on this important topic, I can arrange a briefing by Secretary Madison tomorrow.

MR. RODNEY: I am sure if you send an invitation to the vice president's office, Miss Matalin, his senior clerk, will pass it on to Mr. Burr. But it is out of my hands.

Q: Burr has blood on his hands.

MR. RODNEY: David, that is the most irresponsible comment that I have ever heard. No one is drawing your portrait, so why are you behaving so theatrically?

Q: I am trying to get to the bottom of this and you have been stonewalling all my questions.

MR. RODNEY: I have not heard a question for quite some time. But I see that Lester has his hand up.

Q: What is President Jefferson's position on miscegenation? Isn't it true that he has shamefully lived as man and wife with Sally Hemings?

MR. RODNEY: Sanjay, do you have a follow-up query on the Kashmiri issue?

Q: Here's a question for you, Elbridge. When did you learn that Hamilton had been shot?

MR. RODNEY: A courier arrived from New York late last night saying that a tragic accident had befallen someone in Mr. Hamilton's party. Since I assumed that the courier was merely referring to the Federalist Party, I saw no need to wake President Jefferson, who had spent an arduous day inventing the dumbwaiter.

Q: How dumb is the waiter?

MR. RODNEY: There will be a portrait op tomorrow with the president and his new invention for moving food from one floor to another. The president will pose for illustrators for 10 minutes, but will not take any questions.

Q: Why are you claiming that Mr. Hamilton died of "self-inflicted" wounds?

MR. RODNEY: I said that was "apparently" what happened. Now I am not a trained detective like you reporters, but what other conclusion can be drawn when the former Treasury secretary was found with a gunshot wound in an isolated spot along the Hudson River?

Q: That your vice president killed him in a duel.

MR. RODNEY: David, you're out of line. The only other thing I have for you on this sad topic is that President Jefferson has ordered flags flown at half-mast in Mr. Hamilton's honor.

Q: Is any other official memorial planned?

MR. RODNEY: President Jefferson is considering issuing a commemorative $10 gold piece in Mr. Hamilton's honor, but that is a decision that ultimately will be made by Treasury Secretary Gallatin.

MR. RODNEY: David, this is your last press conference. And everyone else, it is 1:00 p.m. tomorrow for the dumbwaiter portrait op.