Making a comeback on his 47th birthday, tennis bad boy John McEnroe played beautifully -- and even acted like a gentleman. 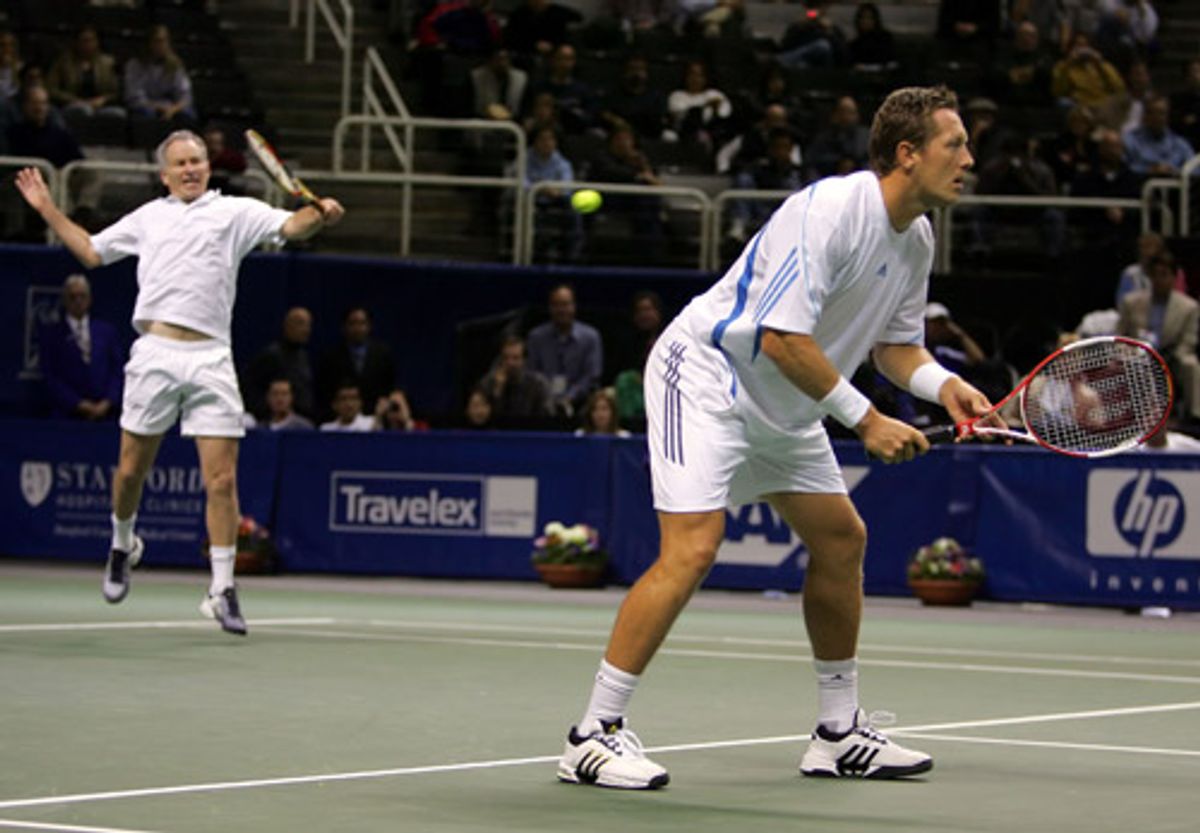 It was put up or shut up Wednesday night for tennis legend John McEnroe. Many times over the past decade, McEnroe had bragged that well into his 40s he could compete -- at least in doubles -- with contemporary players. Basketball star Wilt Chamberlain and football great Jim Brown had made similar boasts as they'd aged, but never followed up. "Let me tell you something about tennis and basketball," says John Lucas, a one-time all-American in both who played in the NBA. "Tennis is harder. You've got to play every minute. And you can't hide out there on the floor and let other guys do the work."

Since retiring in 1992, McEnroe has fared well on the Champions Tour against players over 30. But Wednesday at 10:30 p.m., an hour and a half shy of his 47th birthday, marked the first time that he stepped onto a court to face pro players a decade younger than him -- albeit in a doubles match.

How did he look? No idiot, he mastered the first rule of doubles: partner selection. He paired with Jonas Bjorkman, a 33-year-old Swede who has been one of the most successful doubles players of the last decade, earning eight Grand Slam titles. Bjorkman is highly nimble with his hands and feet and able to strike his service returns exceptionally hard and early. These attributes mesh nicely with McEnroe's unmatched mix of touch and angles, a set of skills that arguably now make him the finest doubles player in tennis history.

Their opponents were the tournament's second seeds, Wayne Arthurs and Stephen Huss. Arthurs is a veteran Australian with a wicked lefty serve but little else of substance. Huss, playing with another partner, made a Cinderella run last year to the Wimbledon title. The good news for McEnroe was that Huss was versatile but hardly possessing the artillery of many of today's players.

But of course the lure of the match was not strictly confined to volleys, serves and returns. This, after all, was John McEnroe, "Johnny Mac," tennis' eternal enfant terrible who for his entire career has simultaneously been artist and asshole. With his racket, McEnroe has been one of tennis' most brilliant players, worthy of comparison to his idol, Australian Rod Laver. He's also one of sport's rudest people, a churlish, petulant brat who intimidated officials, opponents and spectators around the world with his tantrums.

Those of us who've covered tennis for a long time see the irony in McEnroe's comeback. During his playing days, at press conferences that resembled therapy sessions, he frequently explained he had far-ranging interests. Once his playing days were over, he said, he hardly intended to be one of those old-timers who stuck around tournaments like high school grads cruising the parking lot. Granted entry into art, music and television by dint of his fame, McEnroe proved to be a dilettante gallery owner, tone-deaf singer and borderline-hostile talk show host. In the spirit of such rogues as Buffalo Bill and Donald Trump, he has parlayed his angry reputation into a highly profitable Madison Avenue image. Unquestionably, he is one of tennis' keener TV analysts.

Then again, unless he deems a person as either worthy of his reverence or sympathy, McEnroe can hardly be bothered to make eye contact or greet people who have known him for years. And his on-court rage remains real. Last fall I watched him play a tournament in Houston and in all four matches he chewed out officials and fans. Knowing he was the event's marquee draw, those in charge were powerless to reprimand him.

But one of the joys of writing about sports is that what athletes say or do off the playing field is never more than 49 percent of the story. So I try to ignore McEnroe the person and witness the eternally engaging tale of his racket. Through his late 20s and early 30s, over the last half of his playing career, McEnroe's indifferent training habits had caught up with him. After winning seven Grand Slam singles titles by age 25, he reached only one final over the remaining eight years of his career. In his autobiography, "You Cannot Be Serious," McEnroe confessed that he spent a little too much time enjoying the good life with pals like Jack Nicholson when he should have been training.

McEnroe is currently in far better physical condition than he was 10 to 15 years ago. On Wednesday, he walked onto the court and gingerly pumped his fist to a standing ovation from the crowd of roughly 7,000 people. A fan yelled out, "Happy birthday, John." Early in the match, when McEnroe glared at an official he thought had missed a line call, yells rang through the arena, the crowd eager to get in on the action.

To his credit, McEnroe had none of it. This was no exhibition. It was business all the way. With Arthurs serving at 2-3, McEnroe struck a superb backhand service return for a winner. When he coaxed a volley error from Arthurs to notch another point, the crowd roared. In a courtside corner, as he had so many times in matches with higher stakes, sat McEnroe's father, smiling at the good points, shaking his head when Bjorkman misfired. Soon enough, McEnroe and Bjorkman won the first set 6-3 and broke to go up 2-1 in the second. A frustrated Huss fired the ball into the stands as the arena's speakers blared "Twist and Shout."

For all his off-court narcissism, McEnroe supremely grasps the team concept that makes for great doubles. His genius lies less in his ability to strike scintillating winners and more in his aptitude for coaxing the ball into compromising corners, keeping it low or short or deep -- all a matter of proper court management so that his partner is never put in a tough position. Add to that his versatile left-handed serve, top-notch reflexes and fine court speed.

With Huss-Arthurs serving at 3-5, McEnroe-Bjorkman reached match point. After Bjorkman rocketed a backhand return that Arthurs netted, McEnroe won his first comeback match; in 20 minutes, he would turn 47. Out came cake and a song, "You're Unbelievable," followed by the crowd regaling the birthday boy.

"Maybe we can do this," McEnroe said afterward. "But for our next match" -- Friday night vs. yeoman players Ashley Fisher and Tripp Phillips -- "I'm sure our opponents will be gunning for us."

In victory, McEnroe appeared subdued, affable enough that one who'd never been around him much would think he was another passionate New Yorker worthy of a barroom conversation. "I like to think I've improved as a person," McEnroe said. "I've got a lot of work to do. I've got kids who keep me humble." Given his exceptional performance on the court Wednesday, and his candor off it, maybe history really will remember John McEnroe for his racket and not his mouth.

Joel Drucker is a regular contributor to Tennis Magazine and Tennis Week. He is the author of "Jimmy Connors Saved My Life."