By continuing to publish documentation of the abuse, we hope to shed light on a chapter in American history that this administration has tried to keep in the shadows. 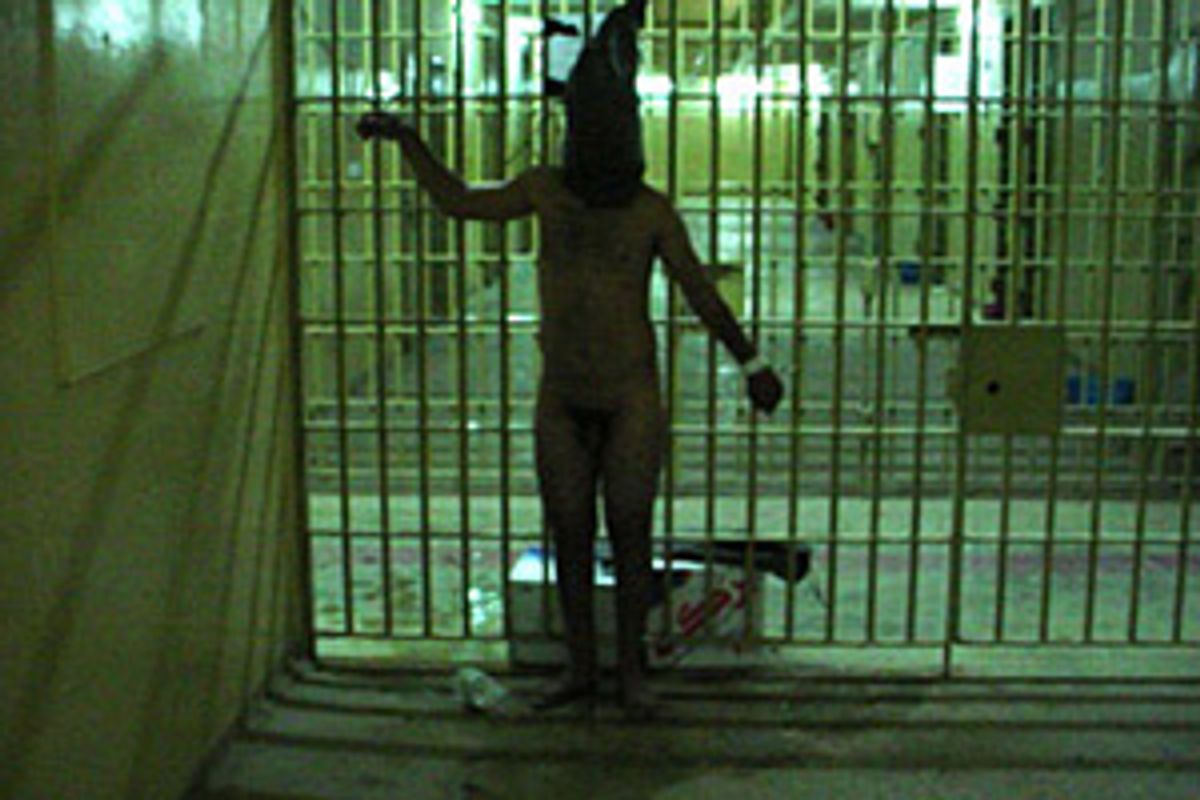 In the wake of our publication Wednesday evening of photos from Abu Ghraib prison that had not previously been available to the public, Salon's readers have raised several issues that we'd like to address. The most important of these are: Why did we publish this material when we did? Was Salon somehow "sitting on" this material? And why didn't we publish everything we have?

We received a voluminous archive of Abu Ghraib materials a week before we published our story. With help from our news team, investigative reporter Mark Benjamin began the careful process of vetting what his source provided and determining what we had that was new and not simply duplicates or near-duplicates of images already available to the public.

This process took several days. As we were digging into the archive, the Australian television news show "Dateline" published its own Abu Ghraib file, with many, but not all, of the photos we were busy cataloging.

It's tough to be scooped, but it's tougher to live with the result of making bad judgment calls under the gun of a deadline. We accepted the risks posed by our choice not to rush to publish what we had without vetting and authenticating it, even after the Australian photos ran. We also realized we had two assets the excellent Australian report did not: some unique and disturbing photos of abuse, but maybe more important, documentation of what many of the photos depicted in the Army's own Criminal Investigation Command (CID) report -- information that allowed us to provide informative captions with our photos.

So we set out to create a photo portfolio that provided context for all the images shown. Our goal was to publish newsworthy images that hadn't been widely seen before, providing the best information that the CID investigation materials could offer.

In the end we published 18 photos. We ruled out photos that depicted horrific scenes that we couldn't be sure were the result of abuse -- while disturbing, certain subsets of images might be photos of people who arrived at the prison dead or injured, who were injured in the course of a battle and not during interrogation or torture.

We felt that the 18 photos we chose represented a cross section of the types of psychological and physical abuse known to have occurred at Abu Ghraib -- in particular, sexual humiliation. The photos depicted almost routine nudity, along with many instances of male prisoners with their faces covered by women's underwear, as well as arguably the most disturbing image of the group, the scene of an allegedly mentally deranged prisoner apparently sodomizing himself with an unidentified object.

For now, there are two criticisms we'd like to answer. One is the suggestion from some readers that we should put the entire archive on our Web site. Another is the provocative, though I think disingenuous, demand that if we're willing to inflame Muslim sentiment with this awful photo gallery, then we should have also hosted -- and should now immediately publish -- the Danish cartoons of Mohammed that spread riots and violence throughout Europe and the Muslim world.

Let's take the last argument first, since I was bludgeoned with it by Tucker Carlson on MSNBC's "The Situation" Thursday night -- and, more important, since some of our readers are asking the question sincerely. I'm enormously proud of our coverage of the Danish cartoon controversy. We were among the first U.S. news organizations to give it significant attention, and from our very first story, we linked to Web sites hosting the cartoons in question, as we typically do with samples of media that have come under fire.

We're not a newspaper; we're a creature of the Web, and the cartoons are easily accessible in our world. We linked early and often, we got criticism for even linking, and meanwhile we covered the story from every imaginable angle: an interview with passionate Dutch legislator and Muslim reformer Hirsi Ali, who defended the cartoons and insisted they be shown everywhere; a nuanced examination of the politics behind the Jyllands-Posten decision to run the cartoons, by a liberal Danish intellectual; a tough analysis by Juan Cole; reporting from the streets of Morocco.

Simply put, the cartoons are not being suppressed on the Web -- in fact, they're easy to find. Were they to disappear tomorrow thanks to some campaign or censorship, we'd have to seriously consider making them available on Salon, given their news value. For now, that's not the issue.

There's something essentially wrong about equating the Mohammed cartoons and the Abu Ghraib photos, anyway. The former are Op-Ed pieces commissioned by editors; the latter are images of actual events. We can and do condemn the hate and violence the cartoons provoked. But as Americans we are directly complicit in the violence that took place at a prison run by the American military. It is our story in a way that Danish cartoons can never be.

As Walter Shapiro argued so movingly in his piece explaining why we ran the photos, the point is not merely that Americans tortured these prisoners in our custody; the point is that our military personnel went to such great lengths to capture the humiliation on camera. It's a double violation, a double humiliation (and it's why we took care to obscure the identities of any victims whose faces were visible).

Abu Ghraib matters severely. It will go down in history as a terrible humiliation for our democracy, for our ideas about the rights of individuals and the responsibilities of conquering armies. For a brief scarring moment in 2004, just a few weeks really, we had a national crisis over Abu Ghraib. But after a short period of time, the pathologically secretive Bush administration announced the controversy was over, everyone was free to go back to what they were doing, there was nothing to look at here, move along.

A handful of low-level military personnel were indeed prosecuted; but the leaders of the prison and of the interrogation project never faced charges. And meanwhile, we learned from our leaders: Oh, by the way, there were many more photos, cataloged by the Pentagon and shared with some congressional leaders. But they weren't fit to be seen by the American public. So the government hid them away, and continues to do so -- despite losing in federal district court to a suit by the American Civil Liberties Union and the Center for Constitutional Rights seeking release of the images.

But what about the argument that publishing more evidence of Abu Ghraib abuse simply incites further violence against American targets? As an American news organization, we do not believe we should make decisions about censoring discussion and debate of our government, and our military, based on fear of extreme Muslim reaction. As Federal District Court Judge Alvin Hellerstein wrote in a decision in favor of the ACLU and CCR suit, rejecting administration arguments that the images would inflame terrorists: "Terrorists do not need pretexts for their barbarism."

Now Salon, we believe, has the archive the ACLU and CCR have sought. We face a series of decisions about what, if anything, further to do with it. We definitely intend to publish a significant amount of additional material in the near future. But we have also rejected the notion of a quick and dirty dump of the contents to the Web. Some significant portion of the documents we possess does not appear to relate at all to prisoner abuse at Abu Ghraib, and we can see no public interest served by publishing it.

So sticking with the bar we established for ourselves earlier this week, we will, at minimum, continue to work with the photos -- brand new and already published -- for which we can find documentation in the CID report, those we know the Army already found were evidence of abuse and/or torture. There are several disturbing videos we will attempt to hold to the same standard. Our staff will continue its reporting efforts to determine the legal, political and journalistic implications of those images. We will work to provide accurate and useful captions for whatever we publish.

We know we'll publish more, but we don't know how much we'll publish, and we don't know exactly when. We may disappoint those who think we should post everything to the Web and let readers sort out their meaning. But to us, that seems an abdication of responsibility. If you come to the Abu Ghraib archive at Salon -- we have one, and it will grow -- you will have a sense of confidence that you understand the images and the stories behind them.

To people who say this should have been over in the spring of 2004, when CBS and the New Yorker first published disturbing images of torture, let me say, I agree. At that point, our government could have said, "Yes, we have many more of these disturbing photos, and here they are. Let's stare at them and feel grief and outrage and decide as a nation that this was a terrible breach of everything we stand for. Let's figure out the chain of command that led to this abuse. Let's go beyond punishing the low-level service members who participated. Let's uncover the institutional decisions that led to this depravity. Let's examine whether higher-ups imposed policies for aggressive interrogation that countenanced such appalling behavior."

Had the Pentagon and the White House done all that, maybe this would have been behind us almost two years ago. But of course, they didn't. This is an administration known for obsessive, scandalous secrecy; Abu Ghraib is just one point on a long continuum of cover-ups. As we create an Abu Ghraib archive, we will aim to shed light on what the administration has determined to keep dark. In giving the American electorate the information it needs, we'll try to provide some of the transparency our government has so sorely lacked.

We'll do our job with integrity and diligence. That, of course, takes time. So thanks for your patience and your trust.