Right-wing activists have blasted the GOP Congress' pork barrel spending. It'd be easier to take them seriously if so many of their leaders weren't in the bacon business themselves. 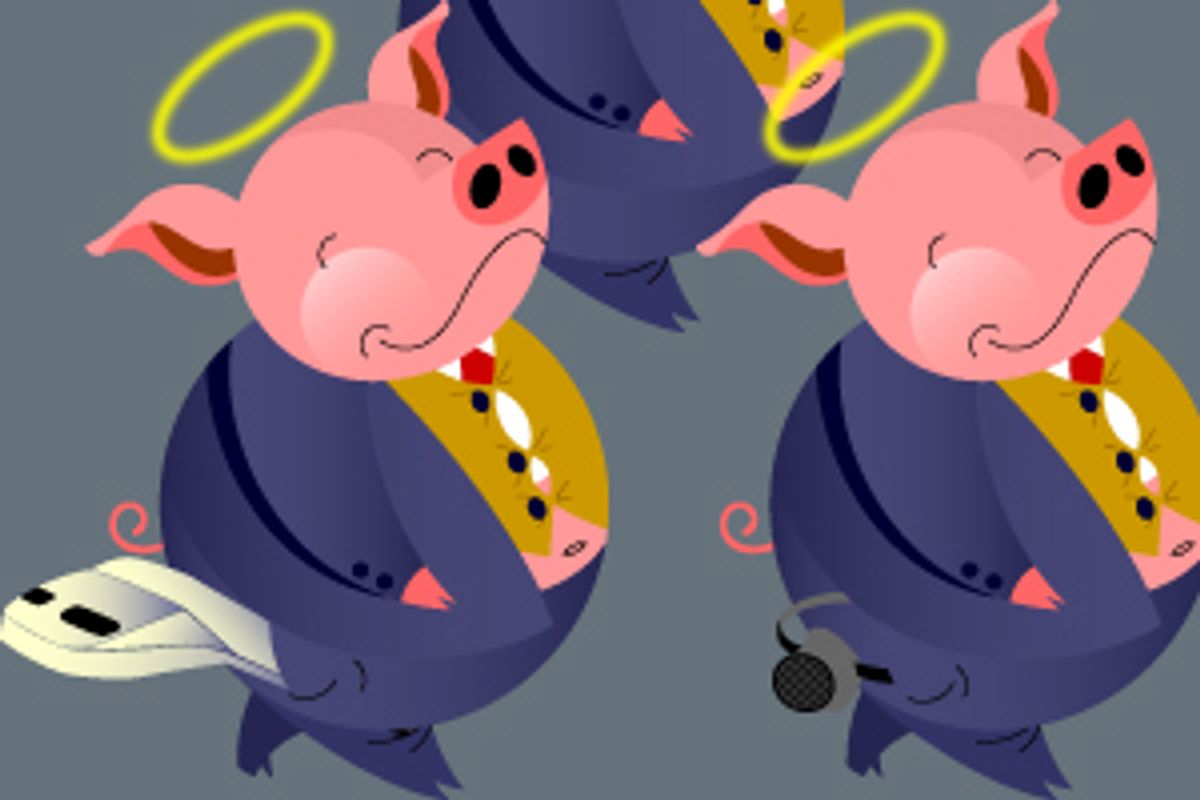 The mother church of right-wing activism, the American Conservative Union, issued an electronic call to arms earlier this month. There was a new enemy at the gates: the free-spending ways of the Republican Congress. "I'm tired of being taxed to death just so elitist politicians can 'bring home the bacon,'" declared J. William Lauderback, the group's executive director, in an e-mail to members and supporters. "That's why I'm asking you to join with me TODAY to send a very simple -- yet effective -- message to Congress. Simply put -- No more pork barrel spending."

For those unaccustomed to the opaque lingo of Washington, Lauderback was referring to the enormous increase in individually designated pet projects -- also called pork -- that federal lawmakers have been inserting into spending bills. In 1994, during the last year of Democratic control in the House, lawmakers approved about 4,000 of these projects, which are added without any request from the White House or Cabinet-level agencies. Last year, the number grew to 15,000, totaling $47 billion, ranging from the ill-fated $223 million "bridge to nowhere" in Alaska to $242,000 for educational programs about wild turkeys. "We are expecting REAL REFORM," thundered Lauderback in his e-mail, "and not just a lot of double talk and empty promises!"

In a political environment adrift in hollow rhetoric, the e-mail appeared to be a breath of fresh air. Conservative activists, it seemed, were finally ready to take the stand against those self-described "conservative" Republicans in Congress who had overseen the explosion in pork barrel spending. That impression was confirmed a few days later when Rep. Mike Pence of Indiana appeared at the ACU's annual conference to condemn runaway spending and to call on his fellow Republicans to reform their ways. "What of the promises that said, we'll cut spending, we'll rein in big government?" asked Pence, who leads the militant anti-spending wing of Republicans in the House. "There is too little discipline, too many compromises, too little resolve."

Both Pence and Lauderback focused their ire on opportunistic politicians who have abandoned the nostalgic mantle of President Ronald Reagan, who famously vetoed a 1987 highway bill because it contained a mere 150 pork barrel projects. But in their frenzy, they made only passing reference to the other half of the pork barrel equation, the thousands of well-connected lobbyists who earn high six- and seven-figure salaries peddling these projects to lawmakers.

Perhaps this omission can be traced to the fact that many of the leading tacticians of the conservative movement moonlight as pork-procuring lobbyists.

The ACU's own 35-member board of directors, for example, includes five lobbyists who have hitched their fortunes to the pork barrel gravy train. Their involvement points to the tangled complexity of the effort to end runaway spending. Some of the most influential behind-the-scenes players from both political parties pay their mortgages by pushing pork on Capitol Hill as lobbyists.

Begin with David Keene, ACU's chairman and an icon of the conservative movement, who lobbies for pork on behalf of nearly a dozen clients at the Carmen Group, one of Washington's premier advocacy law firms. One client, Survival Inc., retains Keene's services for $10,000 a month. In exchange, Keene has helped the company get $2.4 million in earmarks since 2004, money that was used to buy Survival Inc. decontamination gear to respond to a possible chemical, biological or nuclear attack.

"I don't work for a client for things that I don't feel comfortable with," said Keene, who argued that his lobbying work is consistent with his ideological belief in paring back federal spending. (He billed 19 lobbying clients $4.5 million during 2004 and the first six months of 2005.) Rather than dismiss pork as an outrage, Keene defended it, arguing that the bureaucracy should not have sole control of government spending and rhapsodizing about the important role the legislative branch plays in adding funding requests to proposals put forward by the president's Cabinet. The funding for Survival Inc., he said, had not initially been included in military funding requests, but he had been assured that the Air Force wanted the Survival Inc. gear. "I would not have done it for a client if it was something that nobody wanted," Keene said.

Others lobbyists who serve on ACU's board of directors also defended their work to secure pork barrel projects on behalf of clients. Board member Cleta Mitchell, an attorney at Foley and Lardner, said that lobbying for pork was only an "incidental" part of her practice. "I don't have an earmark business," Mitchell said. Nonetheless, one of Mitchell's clients, the High Speed Ground Transportation Association, bragged in a 2003 press release about Mitchell's close ties to Rep. Ernest Istook of Oklahoma, the head of the appropriations subcommittee for transportation projects, a major stopping point for pork-hungry politicians. Mitchell's team, said the release, was hired to "help us launch a meaningful, coordinated coalition and advocacy drive to secure sustained federal funding." In 2005, Congress approved $45 million for a high-speed magnetic levitation train slated to connect Las Vegas and Los Angeles.

Van Hipp Jr., another ACU board member who lobbies for defense firms for American Defense International, said he was particularly proud of some of the pork projects he has helped to fund for his clients. "They have been used in the war on terrorism," he said. In particular, he said he was proud of a mine-clearing technology produced by the Ensign-Bickford Aerospace and Defense Co., which received a $4.5 million earmark last year, after paying Hipp's firm $200,000 over 18 months. "You have to use a common-sense test," said Hipp, a former Pentagon official, explaining how he decides whether or not to support a pork project. "The people who I have dealt with have been very aboveboard, people who have the best interests of the country in mind."

The ACU board also includes Al Cardenas, a former head of the Florida Republican Party, who lobbies for funding on behalf of the Recreational Fishing Alliance as well as Thorium Power, a company that has received federal aid for its plutonium-disposal technology. Charlie Black, a prominent Republican strategist and ACU board member, represents a variety of firms, including North America's SuperCorridor Coalition, a group that fights for transportation earmarks opposed by conservatives like Rep. Pence.

The advantages of hiring a lobbyist inside the conservative movement only begin with easy access to Republican leadership. In 2004, Keene went so far as to "set up an opportunity" for Survival Inc. CEO Rick Stewart to speak at the ACU's annual conference of conservative activists, according to a company press release. While at the conference, Stewart met with Vice President Dick Cheney. Keene said his lobbying work was incidental to Stewart's role at the conference and the meeting with Cheney. "He was a longtime friend of mine and of the National Rifle Association and other groups," Keene said of Stewart.

Lobbyist-activists like Keene and Mitchell say they do support some curbs on the pork barrel system they are hired to exploit. "The appropriations process is pretty well a mess," said Mitchell, who favors increasing the transparency of the pork-production process. Keene also says he favors more transparency, including a ban on earmarks that are not fully debated and approved by congressional committees and subcommittees. "You know what an earmark is?" Keene asked, referring to his Western roots. "An earmark is when you notched a cow's ear so you know who owns a cow."

But such incremental changes are a far cry from the bold proposals that Keene's own organization has proposed to members -- a total ban on pork. Without the support of those who help bankroll the conservative movement, those lofty goals may be nothing more than a lot of talk. As Lauderback put it himself, in his e-mail to activists, "It's one thing to TALK about earmark reform and win points with the American people ... but actually enacting reform is another thing."