A 3-year-old executive order that vastly expanded his powers illuminates how the vice president and his minions led us into war. 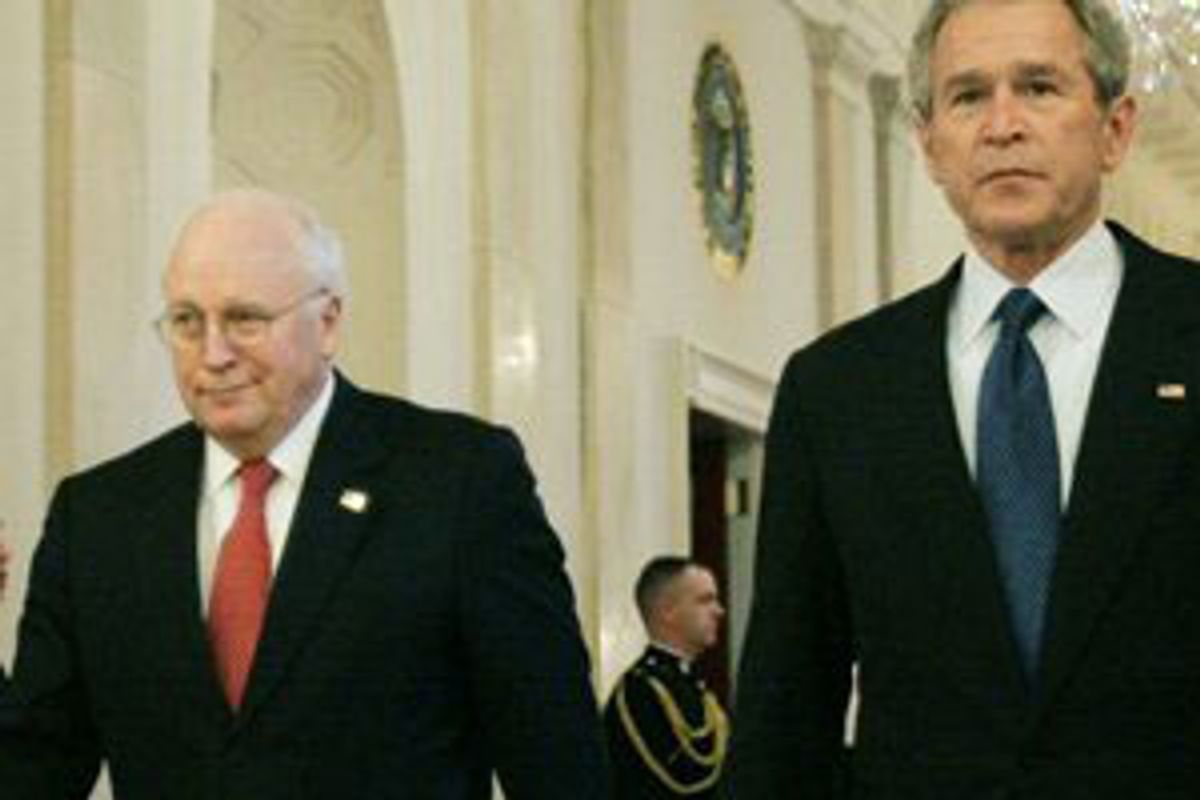 After shooting Austin lawyer Harry Whittington, Dick Cheney's immediate impulse was to control the intelligence. Rather than call the president directly, he ordered an aide to inform White House Chief of Staff Andrew Card that there had been an accident but not that Cheney was its cause. Then a host of surrogates attacked the victim for not steering clear of Cheney when he was firing. Cheney attempted to defuse the subsequent furor by giving an interview to friendly Fox News. His most revealing answer came in response to a question about something other than the hunting accident.

Cheney was asked about court papers filed by his former chief of staff, I. Lewis "Scooter" Libby, indicted for perjury and obstruction of justice in the investigation of the leaking of the identity of an undercover CIA operative, Valerie Plame. (She is the wife of former ambassador Joseph Wilson, a critic of disinformation used to justify the invasion of Iraq.) In those papers, Libby laid out a line of defense that he had leaked classified material at the behest of "his superiors" (to wit, Cheney). Libby detailed that he was authorized to disclose to members of the press classified sections of the prewar National Intelligence Estimate on Saddam Hussein's weapons of mass destruction. (The NIE was exposed as wrongly asserting that Saddam possessed WMD and was constructing nuclear weapons.) Indeed, Cheney explained, he has the power to declassify intelligence. "There is an executive order to that effect," he said. Had he ever done that "unilaterally"? "I don't want to get into that."

Bush operates on the radical notion of the "unitary executive," that the president has inherent and limitless powers in his role as commander in chief, above the system of checks and balances. By his extraordinary order, he elevated Cheney to his level, an acknowledgment that the vice president was already the de facto executive in national security. Never before has any president diminished and divided his power in this manner. Now the unitary executive inherently includes the unitary vice president.

The unprecedented executive order bears the earmarks of Cheney's former counsel and current chief of staff, David Addington. Addington has been the closest assistant to Cheney through three decades, since Cheney served in the House of Representatives in the 1980s. Inside the executive branch, far and wide, Addington acts as Cheney's vicar, bullying and sarcastic, inspiring fear and obedience. Few documents of concern to the vice president, even executive orders, reach the eyes of the president without passing first through Addington's agile hands.

To advance their scenario for the Iraq war, Cheney & Co. either pressured or dismissed the intelligence community when it presented contrary analysis. Paul Pillar, the former CIA national intelligence officer for the Near East and South Asia, writes in the new issue of Foreign Affairs, "The administration used intelligence not to inform decision-making, but to justify a decision already made."

On domestic spying conducted without legal approval of the Foreign Intelligence Surveillance Court, Addington and his minions isolated and crushed internal dissent from James Comey, then deputy attorney general, and Jack Goldsmith, then head of the Justice Department's Office of Legal Counsel.

On torture policy, as reported by the New Yorker this week, Alberto Mora, recently retired as general counsel to the U.S. Navy, opposed the Bush administration's abrogation of the Geneva Conventions -- by holding thousands of detainees in secret camps without due process and using abusive interrogation techniques -- based on legal doctrines Mora called "unlawful" and "dangerous." Addington et al. told him the policies were being ended while continuing to pursue them on a separate track. "To preserve flexibility, they were willing to throw away our values," Mora said.

The first vice president, John Adams, called his position "the most insignificant office ever the invention of man contrived or his imagination conceived." John Nance Garner, Franklin D. Roosevelt's first vice president, said it was not worth "a warm bucket of spit." When Dick Cheney was secretary of defense under the first President Bush, he reprimanded Vice President Dan Quayle for asserting power he did not possess by calling a meeting of the National Security Council when the elder Bush was abroad. Cheney well knew the vice president had no authority in the chain of command.

Since the coup d'état of Executive Order 13292, however, the vice presidency has been transformed. Perhaps, for a blinding moment, Cheney imagined he might classify his shooting party top secret.