Psychologist Steven Hayes says the American obsession with feeling good is preventing us from living good -- and that living life to the fullest means a lot of pain. 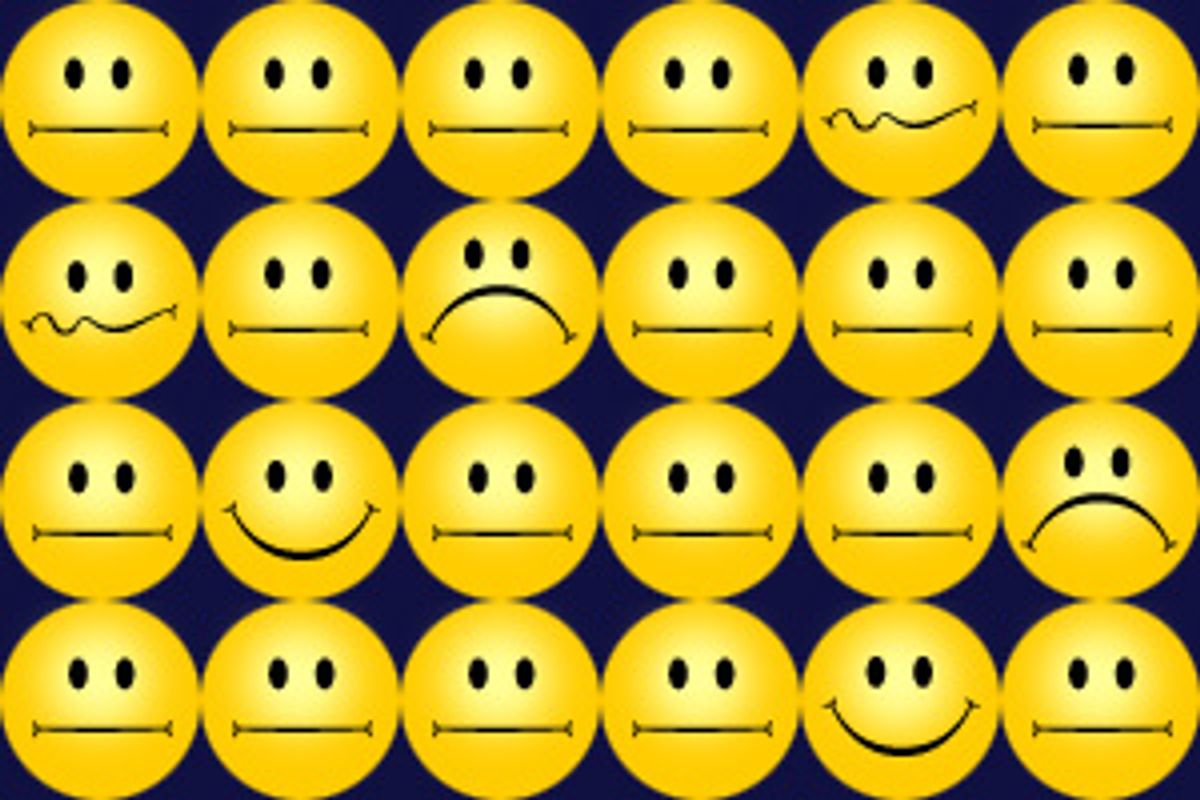 Psychology has an improbable new rock star in Steven Hayes, a 57-year-old University of Nevada professor whose newest book, "Get Out of Your Mind and Into Your Life," coauthored with Spencer Smith, earned him a splashy profile in the Feb. 13 edition of Time magazine. The arresting headline of the Time story was "Happiness Isn't Normal" -- and while that's not a sentence Hayes actually penned, it has quickly become the catchphrase associated with his controversial school of "acceptance and commitment therapy." ACT, as it's known, is an approach to mental and behavioral health that flies in the face of traditional cognitive therapy and is being referred to as "third-wave" psychology (following second-wave cognitive therapy and first-wave behavior therapy).

Hayes has written 27 books and co-written more than 300 peer-reviewed articles. Some of his colleagues already worship him; others regard him as a quack. Yet it's "Get Out of Your Mind and Into Your Life" -- a floppy workbook that would look right at home in the "personal growth" section of Barnes & Noble -- that currently sits at 73 on Amazon's bestseller list and has trained a brighter national spotlight on Hayes.

Why? Look no further than Time's summation of the radical message of "Get Out of Your Mind": "It says at the outset that its advice cannot cure the reader's pain ... it advises sufferers not to fight negative feelings but to accept them as part of life. Happiness, the book says, is not normal."

And there it is again: "Happiness isn't normal." It's that maxim -- along with the first sentence of the book, "People suffer" -- that grabs you. It may be the simplest of notions, but in the exhausting push toward self-betterment, the idea that unhappiness is not something we're honor-bound to spend our lives battling feels like a restorative balm. It's the kind of phrase that makes you beg for more: Is it possible that making it to work on time every day is also not normal?

As it turns out, "happiness is not normal" isn't -- technically -- what Hayes is saying in his book. Apparently, I'm not the only journalist to get a bit overexcited by the idea of a doctor who wants to ratchet down our expectations for self-improvement and fulfillment.

I recently spoke to Hayes by phone from his home, and tried to cut through the self-help fog and get to the root of what, exactly, he is saying -- and why it has so many people talking.

You've become associated with the catchphrase "Happiness isn't normal." Can you explain what it means?

What people mean by happiness is feeling good. And there are many ways to feel good. And many of the ways we feel good actually limit the possibilities for living the way we want to live our lives.

What does that mean? Could you give a specific example?

Say you've been betrayed in love. Now, the reasonable, sensible thing to do is say, "I'm not going to be that vulnerable again." But precisely the reason you loved to begin with was because you wanted to be intimate, known, connected. That's the reason it hurt so much.

But because you don't want to be vulnerable, it prevents you from being connected and intimate, even if you are in a relationship. Now, would a person who's living in a relationship like that say they're happy? They might. But do they have the intimacy and connection they so badly want? No.

We have to ask why it is that we have such issues of substance abuse and addiction, self-control problems and even suicide when most people say they're happy. It's because most people aren't living the ways they want to be living, and that comes from how they're managing their own pain.

So in part you're redefining what "happiness" means.

Well, the word "happiness" does come from the headlines, so that's why I'm talking about it. What I would do with a client is help them learn what their values are. And values require definitions, because there's not a lot in the culture about values. But it's not just a matter of redefinition, it's about changing the game. The natural game most of us are in is how to feel good. That's not the same thing as how to live good.

We don't get good training in how to sit with pain anymore; [we used to have] spiritual traditions of fasting, where you didn't eat even though you were hungry in order to connect with the suffering of other people. Most of those traditions are gone. Now it's only the educated elite who go for 10-day silent meditation retreats who get that kind of experience.

But hasn't religious fasting been replaced by other kinds of self-inflicted punishment?

Yes, like the X Games and reality shows where you eat worms. That's about people going to the other extreme: a seeking out of pain and thrills and challenges. There should be a middle path between suppression and indulgence.

Western culture promotes feel-goodism. In part it's a side effect of having technology to make things easier or feel better. It's natural progress, so we don't have to do the sweaty, hard things our forebears had to do. But inside that is a meta-message, which is that you're supposed to feel good from morning to night. And add on top of that commercialism and medications -- because they feed it too: If you consume the right products, eat the right pill, drink the right beer, drive the right car, you believe that you're not going to feel anything you don't like. What I'm saying is that that is not the definition of a meaningful life, and I'm saying people know it.

But what's the line between sitting with pain and some kind of masochism or self-punishment?

Well, it's also not healthy to say, "To hell with your fear; leap off a tall building and see if the parachute opens up, you big sissy!" A classic example [of repressing your feelings in the interest of bearing up under pain] is the military. You want to see spousal abuse and alcoholism? Go to a military base. Because that kind of "Just do it, you big sissy" message destroys human lives. Doing things that don't feel good by denying your own feelings results in violence, substance abuse.

What I'm saying is find a middle path. My work is about a loving posture: Accept your history, feel your feelings, notice your thoughts, and carry all that forward down a path that you value that's neither indulgence nor suppression.

Well, it could be that that they [make themselves invulnerable] by not getting into relationships, or by being in promiscuous or empty relationships. You can be married and still not make yourself vulnerable -- if you don't let your partner know what you most deeply care about, don't show them where you hide, what the dark places are. But your pain is where you find your values: that you really care about intimacy and connection. That's why it hurts so much.

So if you run away from past thoughts, feelings and bodily sensations you don't like -- what we call experiential avoidance -- you can't do what it is you most deeply want to do, which is to have those kinds of [intimate] relationships. So my questions are: Can you hold your fear and still step forward, even knowing that you could be hurt?

Can you explain how your approach differs radically from cognitive therapy?

Most forms of empirically supported therapy have bought into the idea that the real problem in behavioral health is the presence of private events that are negative. Specifically with regard to cognitive therapy, which for 30 years has been ascendant in the field, the idea has been that you should monitor, detect, challenge and change your negative thoughts, and when you do that, you'll live better. But in a couple of recent randomized trials, that [theory] was shown to be not true.

Our [ACT] model -- of accepting your feelings, disentangling yourself from your mind, connecting with your values, showing up in this moment and getting your feet moving in accordance with your values -- it helps an amazingly broad array of problems, from chronic pain and epilepsy to doing well at work, anxiety, depression, substance abuse ...

I have to say, this "moving in accordance with your values" sounds sort of vague. I don't know that many of us could identify our "values" psychologically.

So what are they?

They are not goals; they're nothing you can have like an object. They are an adverb, qualities of action. So when I say, "What do you want your life to be about?" I've never had somebody say, "What I want to be is the driver of an SUV," or "someone who screws everything that moves." What they tell me are things like, "I want to contribute to other people" and "I want to be a loving person." By saying it, you're connecting to it. But it's hard. Because [once you acknowledge it] you know it is not bullshit, and that it's not something you can ever stop doing. If you say that your values are being a loving person, do you ever get to say, "That's done!" No. A value is like a direction, like going west. No matter how far west you go, you can still keep going west. And the instant you turn and start facing west, you're on the right path.

Say you want to have healthy sexual relationships and that's the direction you want to move in, but you've been raped. As you walk down that path you're going to hit that past trauma, like walking west and running into a swamp. You need the means to walk through that swamp and keep going west, to walk through the past pain and carry it in a gentle, loving way. Because it's OK to have that pain and still connect to another person in an intimate sexual relationship.

In a way, is what you're saying: "Life sucks. Suck it up and move on"?