Locals can't ignore that Katrina haunts this year's festivities. Just check out the floats: "The Pigs of Patronage" and "The Corpse of Engineers." 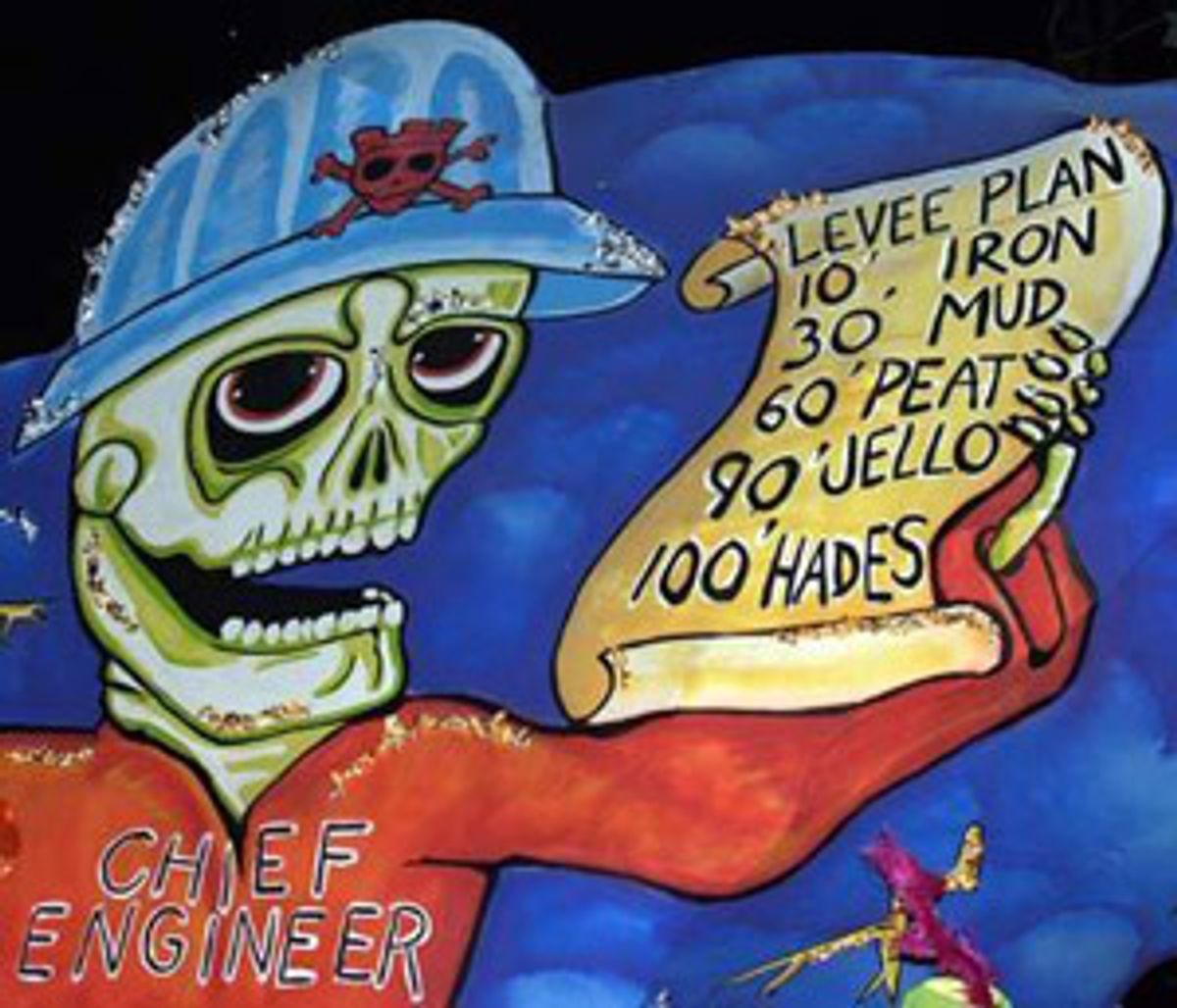 Last week, network newscasts showed scenes of revelers on Bourbon Street in New Orleans as proof that the city had returned to its peculiar version of normality. But even though the record number of journalists on hand (more than 800 media organizations applied for credentials to cover this year's Carnival) are heartened by the city's resumption of its role as an adult theme park for licentious tourists, Mardi Gras 2006, which continues through the weekend, has a sad and bittersweet underside to all the frivolity for locals.

There's a palpable air of desperation in this year's 150th anniversary of Carnival in New Orleans. The weeks of celebrations, parties and street parades leading up to Mardi Gras, or Fat Tuesday, end the day before Ash Wednesday, which marks the Christian fasting season of Lent. This has always been the time of year when New Orleans earned its nickname of the Big Easy, but nothing has been easy for this city's beleaguered residents since Aug. 29.

Hurricane Katrina and the ongoing governmental abdication of responsibility for helping the residents of this stricken city has left the remaining populace angry and weary even as it has geared up for the giant party it is expected to host Tuesday. "The fact that underage suburban tourists can puke on Bourbon Street without fear of going to jail doesn't mean that things are all right with New Orleans," said Terry Fredericks, a cook at one of the French Quarter's all-night eateries, Verdi Mart.

With three quarters of the city literally in ruins, sporadic electricity, postal service and traffic lights, and only the most limited public transportation available, the few residents who've been able to return to New Orleans bristle whenever bromides are delivered about things being back to normal.

Yet everyone in town knows that unless the tourists return, New Orleans is doomed. Since Katrina, New Orleans has lost such big money events as the Sugar Bowl, the Bayou Classic and the Essence Festival as well as virtually all of its convention business. Without a healthy Mardi Gras, the small businesses that have managed to reopen won't last out the summer. "We know we have to have a good Mardi Gras to survive," said Jesse Paige, director of operations for one of the city's fabled nightclubs, the Blue Nile, which opens its doors for the first time since Katrina Friday night. "We've got everything on the line. The bands have all agreed to play without guarantees. We're counting on this weekend's business to generate enough cash to keep us operating."

In the immediate aftermath of Katrina, some displaced New Orleanians argued that Mardi Gras should be canceled while so many of the city's residents are stranded out of town, but those who've returned have done everything in their power to make it happen.

"New York didn't cancel the St. Patrick's Day parade after 9/11," argued radio personality and bandleader Davis Rogan, whose new album has a song called "I Ain't Goin'," about the mind-set of locals who chose to ride out the hurricane. "Why should we give up Mardi Gras?"

The celebration is unique in that it's not a corporate or municipally sponsored event, but a series of parades and balls organized by private citizens who are members of various secret societies, or krewes. Each organization charges its members annual dues and requires them to commit to buying a minimum amount of beads and other "throws." The members keep their identities secret when riding on their krewe's floats by wearing masks.

The Krewe of Muses, which rolled Thursday night, charges $850 in dues and a commitment of $500 worth of throws, insuring that parade goers all get a wealth of trinkets. Muses drew a huge crowd this year, heavily populated with children, who were lavished with stuffed animals and flashing beads, all bearing the Muses signature.

John Gros, leader of the local band Papa Grows Funk, has a full work schedule during Mardi Gras but makes sure his two young daughters get to see as many parades as possible. "I do it because I remember when I was a kid how special Mardi Gras was," said Gros. "My grandfather used to take me to all the parades. We would watch the beginning of the parade at Napoleon Avenue, then jump into the car and drive to another spot where we could watch it again."

Each parade has a theme, and the anonymous nature of the krewes allows for plenty of political satire and outright protest dating back to the Reconstruction era following the Civil War, when masked dissidents assassinated a federal official during the confusion of Mardi Gras revelry. The Knights of Chaos rolled one of the most devastatingly satiric parades ever Thursday night. It was titled "Hades -- A Dream of Chaos." Organizers drew a direct parallel to the 19th century dissidents. "This tableau could be called 'Reconstruction II,' reads the krewe's proclamation, printed on baseball cards thrown from the floats, "as we look with both sadness and humor at events and individuals involved in the devastation of New Orleans."

The floats all depicted harrowing, flame-engulfed scenes from hell, with themes like "The Headless State," "Carpetbaggers," "Homeland Insecurity," "The Pigs of Patronage," "The Corpse of Engineers," "Ministers of Misinformation," and a withering caricature of New Orleans Saints owner Tom Benson (who wants to move the team to San Antonio), "Boogieman."

The most dramatic float, "The Inferno," showed Kathleen Blanco, Ray Nagin and Michael Brown as infernal cooks brewing a giant cauldron of human gumbo in the Superdome as members of Congress forced people into the boiling pot with pitchforks, and a leering George W. Bush presided over the whole scene as the horned Satan incarnate.

These startling images expressed the deep rage and sense of abandonment in this city, sentiment that is not about to disappear in the near future, regardless of how many bared breasts appear on Bourbon Street between now and next Tuesday.

John Swenson is a freelance writer based in New Orleans.