A Central American boy named Enrique traveled 12,000 miles across continents to find his mother. There are thousands of others like him. 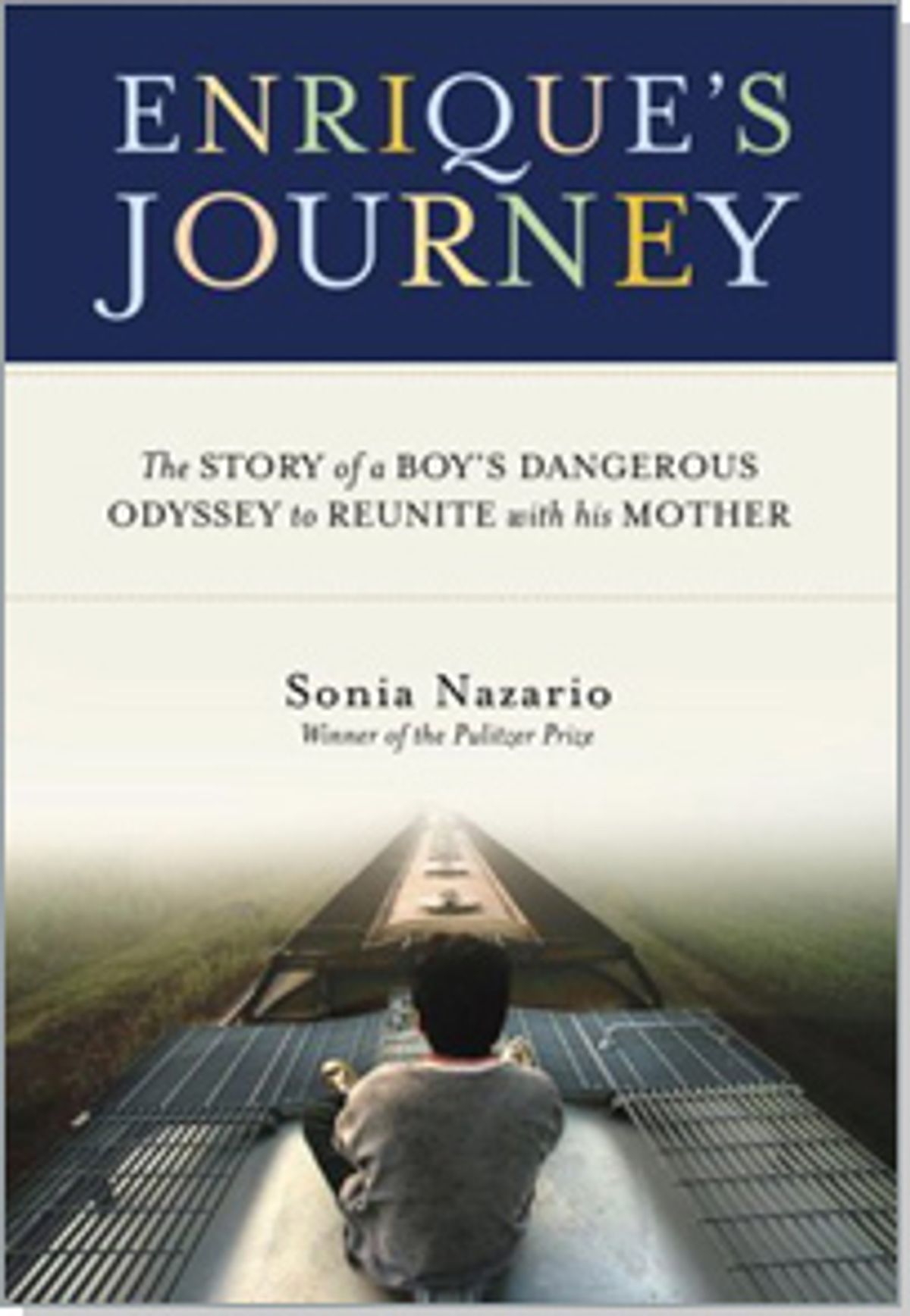 Early in "Enrique's Journey," author Sonia Nazario explains that she was drawn to the young man who became the subject of her book because he was so "average." Indeed, of the nearly 48,000 children who migrate alone to "el Norte" through Central America and Mexico each year, three-quarters are -- like Enrique -- in search of a single mother who has left them behind. According to the Department of Homeland Security, the median age of such child migrants is 15, and the majority of them are male; at 17, Enrique falls comfortably within the average. But statistics aside, it seems almost impossible to fathom a world in which Enrique's trek -- across four countries, through miles of treacherous train tracks and dozens of lonely nights -- could be considered anything less than extraordinary.

Though a condensed version of "Enrique's Journey" was published in 2003 as part of a remarkable Pulitzer Prize-winning series of articles and photos for the Los Angeles Times, the seed for Nazario's book was planted almost a decade ago. In 1997, over coffee in her California kitchen, the journalist learned that Carmen, her Guatemalan housekeeper, had left four young children behind during her migration north a decade earlier. But what moved Nazario even more than her housekeeper's personal saga -- and eventually prompted her to embark on years of intensive reporting -- was the realization that Carmen's experience was unexceptional; with divorce spreading across Latin America and families disintegrating, the face of migration has undergone a dramatic change.

In the introduction to "Enrique's Journey" Nazario explains, "In Los Angeles ... 82 percent of live-in nannies and one in four housecleaners are mothers who have at least one child in their home country." Once a fraternity dominated by Mexican braceros, America's shadow community of illegal immigrants has been joined by an influx of women. And millions of single mothers in Honduras, El Salvador, Guatemala and Mexico, alone and unable to shelter and feed their children, find themselves facing an unimaginable choice: set out for the States alone, but with the hope of earning enough money to pull their children out of poverty -- or stay put, their family intact but doomed to destitution.

"Enrique's Journey" is an intimate, and ultimately inspiring, look at the complex circumstances that push women like Carmen and Enrique's mother, Lourdes, to leave -- and an unsparing confrontation of the consequences their families face as a result. Writing from the perspectives of the various characters in her book, Nazario weaves a narrative that, though tirelessly reported, reads more like a fable than a newspaper story. She describes Enrique's seventh trip north, as he rides the train out of the Mexican state of Chiapas after being repeatedly brutalized and arrested: He watches as "mountains draw closer. Plantain fields soften into cow pastures ... and monarch butterflies flutter alongside, overtaking his car." She recounts how Lourdes, her optimism buoyed by glittering images of el Norte glimpsed on telenovelas and in glossy magazines, swore to her family that within one year she would earn enough money either to return home or to send for her children to join her, only to learn that border economics can be cruel. Caring for a child in Beverly Hills, Lourdes asks herself, "Do my children cry like this? I'm giving this child food instead of feeding my own children." "To get the girl to eat," Nazario writes, "Lourdes pretends the spoon is an airplane. But each time the spoon lands in the girl's mouth, [she] is filled with sadness." Her jobs allow Lourdes to faithfully wire $50 home to Enrique each month, but after years of cleaning houses and caretaking, sleeping only four hours a night -- her family is still no closer to a reunion.

When Nazario first meets Enrique in May 2000, at a church shelter on the U.S. border in Nuevo Laredo, Mexico, 12 years have passed since he last saw his mother. After years of shuttling through the homes of aunts, uncles and grandmothers, tangling himself up in drugs, and ditching school, Lourdes has come to symbolize everything he wants, everything he loves, and everything he has lost. "Enrique fears he will end up on the streets or dead," Nazario writes. "Only his mother can help him. She is his salvation. 'If you had known my mom, you would know she's a good person,' he says to his friend Jose. 'I love her.'"

Enrique will attempt the journey north seven times, traveling for a total of 122 days and more than 12,000 miles. Before he is by Lourdes' side again, he will be beaten by gangs, endure extreme exposure to the ice and sun, suffer repeated arrests at the hands of corrupt police and immigration officials, spend weeks begging for food and drink, and hang from the speeding freight trains that migrants call el Tren de la Muerte, or "the train of death." As it is for the thousands of other young Latin American men and women who migrate to the United States each year, the lure of his mother's love is so intoxicating that nothing short of the grave will deter him.

Nazario's descriptions of fetid boxcars, nefarious smugglers, and arrogant "migra" agents, make it clear that her work is like her subject's single-minded quest to find his mother: It is the result of both years of dedication and, more often than not, blind faith. To authentically replicate the conditions facing Enrique and others like him, she too must spend months living by her wits, in grave danger and in the sorts of unsanitary conditions that most of her middle-aged American peers live their whole lives trying to avoid. When Nazario meets Enrique in northern Mexico, he has been robbed of his only link to Lourdes: a scribbled note containing her phone number. To earn money to call back to Honduras and retrieve the number, Enrique must wash cars day and night for weeks. So, Nazario waits too. When he is finally ready for the last leg of his journey, across the border into the United States, journalist and subject part ways. They rejoin later in North Carolina, where Enrique lives with Lourdes, her boyfriend and young daughter. From there, knitting together weeks of intensive interviews with mother and son, Nazario flies to Honduras, to take up her own sort of surrogate journey, using Enrique's memories to retrace the migrant trail through Guatemala and Mexico.

In spite of Nazario's occasionally gonzo methods, "Enrique's Journey" strikes an evenhanded balance between advocacy and ethical discipline. The brutal poverty she witnesses clearly moves her. Yet, like her contemporaries Adrian Nicole LeBlanc and Alex Kotlowitz, Nazario is careful not to interfere in her subject's lives, choosing instead to let her stories speak for themselves. While not shying from the brutalities children like Enrique face, Nazario balances them with delicate descriptions of kindnesses offered by strangers. There is a field hand who rescues a bloodied and broken Enrique after he has been robbed by thugs. There are migrants who scribble the names of fellow travelers in the margins of their worn Bibles and kneel on the train top to offer them blessings. There are Oaxacan peasants who, though they are malnourished themselves, still gather to toss bundles of bread and fruit to travelers as they pass.

In "Enrique's Journey" Nazario has crafted a contemporary fairy tale, complete with fire-breathing freighters, tattooed villains and absent mothers. And it is those timeless human concerns -- of longing for home, of aching for family, of connections craved -- that elevate her story out of the thorny politics of migration legislation and immigration reform. To readers raised on Disney flicks, perhaps that sounds like a dismissal, but it's meant as nothing of the sort. Since the brothers Grimm, the most enduring fairy tales have been formed from human suffering, striving and sacrifice. It matters little that in "Enrique's Journey" the characters are Latino housekeepers and not Parisian princesses. Nazario's storytelling is itself is a magical act, one that illuminates the invisible -- like phantoms -- in front of our eyes.