God to Margaret: Always with wings!

In updated editions of Judy Blume's classic, Margaret's famous pink belt is replaced with self-adhesive pads. But something has been lost. 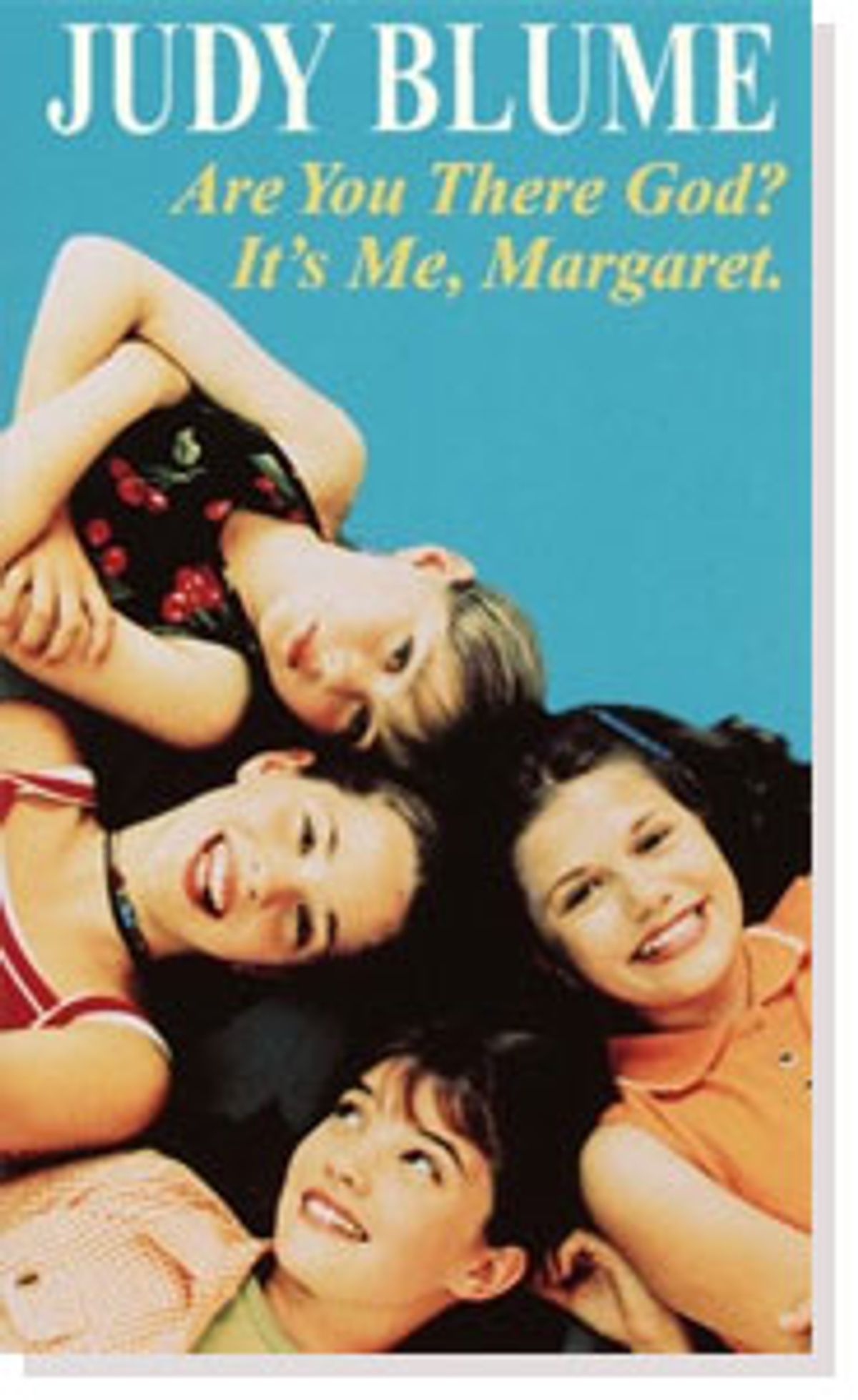 If you're an American woman between the ages of 20 and 40, the following passage will likely be familiar to you:

"I locked the bathroom door and attached a Teenage Softie to the little hooks on my pink belt. Then I got dressed and looked at myself in the mirror. Would anyone know my secret? Would it show? Would Moose, for instance, know if I went back outside to talk to him? Would my father know it right away when he came home for dinner? I had to call Nancy and Gretchen and Janie right away. Poor Janie! She'd be the last of the PTS's to get it. And I'd been so sure it would be me! How about that! Now I am growing for sure. Now I am almost a woman!

"Are you still there God? It's me, Margaret. I know you're there God. I know you wouldn't have missed this for anything! Thank you God. Thanks an awful lot"

Those final two paragraphs of "Are You There God? It's Me, Margaret," Judy Blume's paean to pubescent faith, sweaty-palmed sexuality, and menarche in the Jersey suburbs of the late 1960s, are the climactic answer to Margaret Simon's prayers that she will get her period. (An obsession she shares with her girlfriends, the Pre-Teen Sensations.)

But if you have a daughter who has a new edition of the book, this is how the same passage will begin:

"I locked the bathroom door and peeled the paper off the bottom of the pad. I pressed the sticky strip against my underpants. Then I got dressed and looked at myself in the mirror..."

Yes, it's true: Margaret's pink sanitary belt is history. In the late 1990s, Blume updated the portions of her book that describe 11-going-on-12-year-old Margaret's purchase of (and practice with) a box of the kind of absorbent pads that used to be held in place by a belt worn under the clothes.

In fact, the era of the belt ended just a few years after the 1970 publication of "Are You There God?" leaving most of the book's readers pretty mystified about what the hell all that hooking and unhooking was all about. By the early '80s, the pre-tampon period years were all about pads that stuck right into your underwear, no belts required. (Thanks, God.)

Blume discussed the changes candidly in a terrific interview in the Boston Phoenix in 1998, saying, "Some people get really upset about this, but it has nothing to do with the story ... No one uses belts anymore. Half the mothers haven't used them. [Contemporary readers] have to go to their grandmothers." She also told the Phoenix, "I'd been thinking about it for a long time ... Some people said, 'Oh no, it's a classic. You can't mess around with a classic.' And I said, 'Look, we're not messing around with the character... We're just messing around with the equipment."

And while the changes were also mentioned, in passing, in a 2004 New York Times story about Blume's National Book Foundation medal for distinguished contribution to American letters, few people seem to have gotten their panties in a twist -- so to speak -- about it until now. A few weeks ago, blogger Book of the Day reread "Are You There God?" as an adult and proclaimed it sophisticated and multilayered, and mentioned the updated equipment, calling it "a change that makes sense." But Blume's editorial change came as news to many, and word began to spread like Web wildfire. Apparently, a generation of bloggers -- who undoubtedly gorged themselves on Fudge and Sheila and Tony and Deenie and Margaret as kids -- considered the change a big deal.

And I'm with them. It's a very big deal.

My gut reaction, like Book of the Day's, was to cheer a little, remembering the perplexity I felt when reading about the belt. By the time I was dealing with this stuff, the mid-'80s, it was all Always with wings, all the time, at least until we could make the transition (as soon as humanly possible, please, God) to tampons. Tampons were -- and are -- acknowledged in "Are You There God?" only once: when Margaret's mean girlfriend Nancy asks the feminine product representative who's come to show the sixth-grade girls a filmstrip about "menstroo-ation," "What about Tampax?" "We don't advise internal protection until you are considerably older," is the prim reply. I think it took most of my friends about two periods' worth of walking around with pads in their underwear to decide they were "considerably older." But regardless -- Margaret's practice sessions, the distinction between the cool "Teenage Softies" brand of pad and her mother's "Private Lady" stuff, the process of picking out the separately packaged belt in the drugstore -- these details just didn't resonate specifically with me.

And that was only 15 years after publication! Who could have predicted that the book would wind up in its umpteenth printing, redecorated with modern-looking girls photographed in Baby-sitter's Club-style poses on the cover? When I went to find a new edition with the changes in place, I discovered a whole shelf's worth of almost every one of the Blume books I remembered, while a quick look for some of my other old favorites -- Lois Lowry, Zilpha Keatley Snyder and even Madeleine L'Engle -- turned up a much thinner spread of options. Who could have known for sure that 36 years after its publication (Margaret would turn 48 this month, if anyone's counting) and after having been banned from countless school libraries, "Are You There God" would still be in print, leaving all its first-time readers to wonder anew at the mysterious contraptions from which they are now separated by at least two generations.

But part of what has kept Blume in the teenage canon for so long has been her ability to stuff a health textbook's worth of information about the mechanics of teenage bodies into 200-page stories full of enough emotional Sturm und Drang to not make kids feel as if they're sitting through one of those hellish single-sex P.E. classes. (Note: I support hellish single-sex P.E. classes, as well as good sex education in every form available in every context, and wish that every kid in this country were provided with a copy of "Our Bodies, Ourselves" on his or her 12th birthday. Still, reading "Forever" is way more fun.) Even in a progressive home, raised by parents who were nothing if not open about sexuality and the human body, I found myself educated by Blume; the memory of learning what an erection was from "Then Again, Maybe I Won't" is burned vividly in my brain.

Feminist historians Kathleen O'Grady and Paula Wansbrough, editors of the anthology "Sweet Secrets: Stories of Menstruation," have credited Blume with changing the attitudes of an entire generation of girls about getting their periods. "Are You There God?" is mentioned in "The Curse: Confronting the Last Unmentionable Taboo, Menstruation" and in "The Curse: A Cultural History of Menstruation." The people at "Our Bodies, Ourselves" recommend the book as a resource; Blume reads from "Are You There God?" in the seminal menses movie "Under Wraps"; and there are a number of references to Blume's book at the online Museum of Menstruation and Women's Health.

In short, "Are You There God? It's Me, Margaret" remains the ur-text for those on the verge of menstroo-ation, and thereby carries a heavy burden, especially in these days of crappified sex ed, ever-increasing restrictions on women's reproductive health choices, and mixed messages about youthful sexuality and development. Perhaps it is better -- safer -- to make sure that everything "Are You There God?" tells those girls is as accurate as possible. If it's the only thing a preteen sensation is going to read about her own impending menarche, then better that it not send her on a dizzying, fruitless search for some kind of medieval pink belt with hooks.

This kind of change, a total of perhaps five sentences spread among three scenes, raises a larger question about the way we regard our books. Because while this is an update that was made years ago, it fits in perfectly with a contemporary attitude about our narratives: that they increasingly seem to serve not simply as stories unto themselves, but as instructional manuals. Isn't that, after all, what happened to James Frey's "A Million Little Pieces" when Oprah picked it for her book club and turned it from a "memoir" into a self-help survival guide for addicts?

Isn't that the point that many Salon readers made just last week when they complained that Elizabeth Gilbert's spiritual/travel memoir "Eat, Pray, Love," reviewed by Lori Leibovich, was irrelevant to them because they didn't share Gilbert's economic class and the opportunities it afforded. On one level, that's a valid point. Few people can afford to travel to three different continents in a year, so Gilbert's globetrotting tale of emergence from depression does not provide a model that could be emulated by many. But in the past, the power of a story to chronicle an experience unavailable to many readers has often been considered a plus.

Likewise, a book that retails a historical experience now alien to modern readers has fallen into its own worthwhile category: educational. Young women today have no experience with sanitary belts. They likely never will. Born in 1975, I would never have known that such a thing existed had it not been for reading about it in "Are You There God? It's Me, Margaret." And while it may seem minor -- so very minor, such a few small sentences in a 150-page book that's just as much about God and making your boobs grow as it is about periods -- I'm actually glad for the sense it gave me that as recently as five years before I was born, girls had very different hassles during puberty. I'm glad I know a bit about what they were. I'm glad that other young women know about some of the technology they can be grateful for (wings!) even if they, like me and many others, don't share Margaret's undiluted enthusiasm for the onset of monthly bleeding.

And speaking of Margaret, it makes me a little sad to think that girls (and boys) who get to know her now don't know that she had to pick the color of her belt and learn how to operate it. It seems to me as fundamental a part of the book as the suburban house in which she grew up, the Mice Men record album she got from the Pre-Teen Sensations for her birthday, and the big curlers her mother used to set her hair the night before Norman Fishbein's dinner party for the whole class. Go back and read Margaret again. Admire the cultural stereotyping of the Fishbein house, the fashion choices of poor, sweet early ripener Laura Danker and lawn-mowing hottie Moose Freed. See if you don't feel the late '60s vibrating psychedelically from every sentence, even in the newer editions.

It's hard to imagine, but while we've been busy growing up, "Are You There God? It's Me, Margaret" has become a historical novel, one that gives its readers more than just a mirror held up to their own specific conditions. It offers them the thrill of seeing themselves, even in characters who live in different times, in different worlds. That stupid pink belt is as fundamental as Laura Ingalls Wilder's corncob doll Susan, or the junk that Francie and Neeley Nolan exchange for pennies. The miniature that Jane Eyre draws of Blanche Ingram to remind herself of her comparative worthlessness is heartbreakingly familiar, even though today, upon hearing of her rival's beauty from Mrs. Fairfax, Jane probably would have just looked her up on MySpace.