At a forum in New York, pundits and politicians called for the impeachment of George W. Bush. 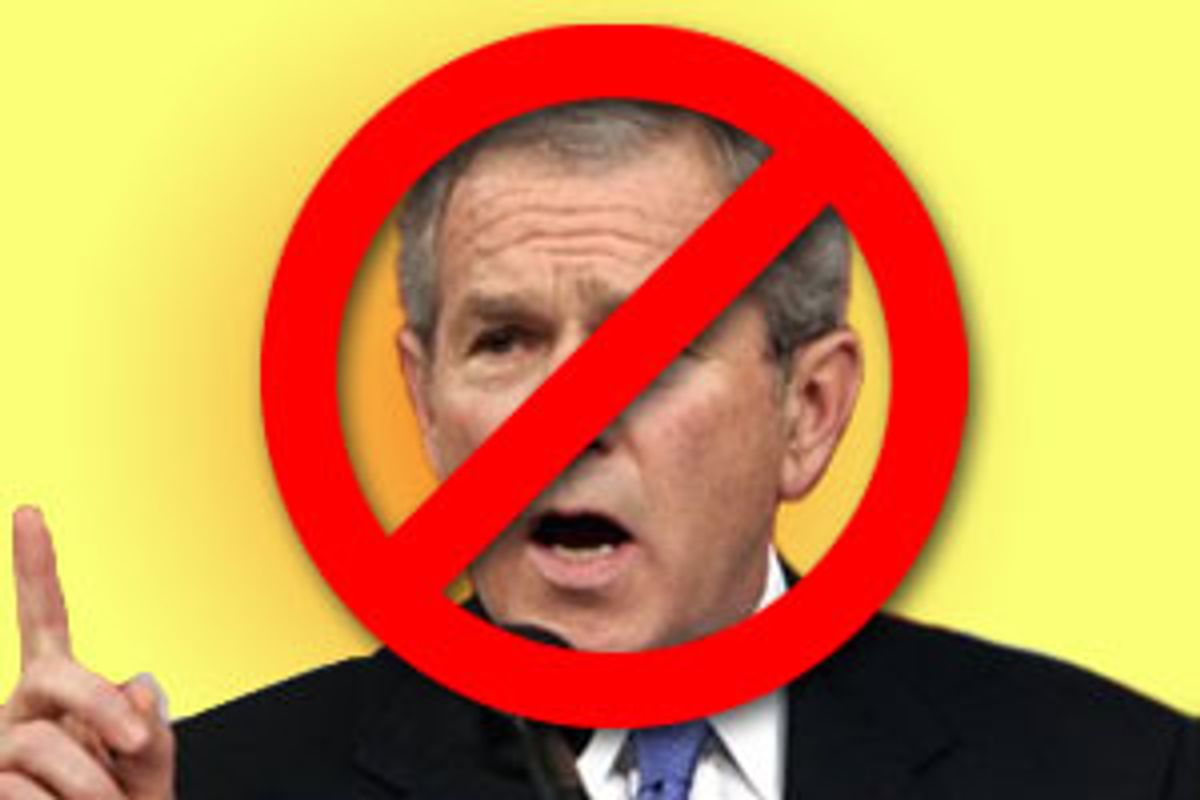 Late last year, the idea of impeaching President Bush, once taboo even among most liberals, started gaining real currency. Following revelations of Bush's domestic spying program -- and the president's unrepentant insistence on continuing it -- former Nixon White House counsel John Dean called Bush "the first president to admit to an impeachable offense." Rep. John Conyers, D-Mich., the highest-ranking Democrat on the House Judiciary Committee, called for the creation of a select committee to investigate "those offenses which appear to rise to the level of impeachment." Twenty-six House Democrats have joined him.

At the end of January, former Rep. Elizabeth Holtzman, a member of the House Judiciary Committee during Nixon's impeachment, penned an appeal for Bush's removal in the Nation, citing his illegal wiretaps, his deliberate deceptions over Iraq, his incompetent prosecution of the war, and his authorizing systemic torture and abuse. "Impeachment is a tortuous process, but now that President Bush has thrown down the gauntlet and virtually dared Congress to stop him from violating the law, nothing less is necessary to protect our constitutional system and preserve our democracy," she wrote. In March, former Harper's magazine editor Lewis Lapham wrote a cover story in that magazine titled "The Case for Impeachment." The Center for Constitutional Rights -- the legal group representing many of the victims of Bush's torture policies -- has just published a book called "Articles of Impeachment Against George W. Bush," and at least one other book in a similar vein is forthcoming, Dave Lindorff and Barbara Olshansky's "The Case for Impeachment."

With so much ferment on the left, last night's public forum, "Is There a Case for Impeachment?" had the buzzy feel of an important cultural event. The gathering, presented by Harper's and moderated by Air America's Sam Seder, brought together Lapham, Conyers, Holtzman, Dean and Michael Ratner, president of the Center for Constitutional Rights. It was held in midtown's Town Hall theater, an elegant space with balcony seating, crystal chandeliers and gold detailing. Around 1,500 people -- mostly a mix of tweedy seniors and clean-cut young activists -- paid $10 for their seats. Built as a meeting place for suffragists, Town Hall has a storied radical history -- in 1921, Margaret Sanger was arrested on its stage for talking about birth control. It was a fitting setting for a discussion of what Rep. Conyers, a veteran of the civil rights movement, presented as the next great David vs. Goliath American struggle.

"I'm not doing this to fail," he said. "This goes back to a little bit of my civil rights background. We were in an impossible situation. The civil rights leaders came to Martin King and said, please, we hear you're going to start a civil rights movement in the South, you'll get all of us killed, Martin, don't do that!" But if he hadn't, said Conyers, the Voting Rights Act of 1965 would never have passed.

"We've lost more rights and constitutional prerogatives in this short period of time than under any president that my studies reveal," he continued. "So now's the time. What we have to do is, we have to work on faith. We have to believe that there are enough American people who will agree with us that enough is enough. We've got to believe that, and we've got to work on that between now and November, and I think we'll win."

Conyers' invocation of the massive odds arrayed against past freedom and justice movements diminished, but did not eliminate, the air of wistful unreality hanging over the whole thing. After all, it is an exercise in extreme optimism to speak seriously about impeaching Bush as if the important question is whether impeachment is warranted. For almost everyone present, the answer to "Is there a case for impeachment?" was a passionate, insistent yes. Indeed, most insisted that the future of the republic depends on it. But the operative question is not whether Bush should be impeached, but whether Bush could be impeached, and that's something most of the panel barely grappled with.

Time and again, Lapham spoke of the responsibility of Republican congressmen to put their duty to the Constitution above their loyalty to the GOP. His seeming conviction that what matters are the facts of Bush's criminality is almost quaint. In his Harper's piece, Lapham wrote, "What else is it that voters expect the Congress to do if not to look out for their rights as citizens of the United States? So the choice presented to the Republican members of the Judiciary Committee investigating the President's use of electronic surveillance comes down to a matter of deciding whether they will serve their country or their party." He echoed this theme at the Town Hall forum, opining at one point that impeachment should not be a partisan issue -- as if he seriously believes that House Republicans are small-d democrats, a delusion almost as great as Bush's conviction that God, not William Rehnquist, made him president.

Others recognized that for impeachment to even be a possibility, Democrats must retake at least one house of Congress in November. Holtzman proclaimed her faith that the people, once awakened, will save their country at the voting booth. "Too many people have been just despondent about what the president has done, and have not understood that the Constitution itself foresaw this kind of behavior and created a remedy. And once people know that, they can become empowered to act. And I believe that if enough people know, then if the Congress doesn't create [Conyers'] select committee, they may change the Congress!"

Things are not, unfortunately, quite that simple. Polls show more Americans favoring Democratic control of Congress than Republican, but that does not mean they can make it so. Redistricting along partisan lines means that most House seats are safe for one party or another; as the Center for Voting and Democracy found in a 2005 report, "The past two House elections were the least competitive in American history by most standards. In each of the four national elections since 1996, more than 98 percent of incumbents have won, and more than 90 percent of all races have been won by non-competitive margins of more than 10 percent."

Electoral maps that pack liberal, urban voters together have put Democrats at a structural disadvantage that is unlikely to be overcome by either exhortations about people power or disenchantment with Republican rule. As Steven Hill, author of "Fixing Elections: The Failure of America's Winner Take All Politics," wrote in Mother Jones last year, "Even when the Democrats win more votes, they don't necessarily win more seats. That's true in the U.S. Senate, the U.S. House, and the Electoral College." In the House, he wrote, "When the two sides are tied nationally, the Republicans end up winning about 50 more House districts than the Democrats."

The Senate is even more distorted; the fact that small, sparsely populated states have the same representation as large states with big cities gives a huge advantage to rural voters, who tend to be more conservative. According to Hill, "In 2004, over 51 percent of votes cast were for Democratic senatorial candidates, yet Republicans elected 19 of the 34 contested seats."

With enough of a groundswell, of course, the Democrats' disadvantage could be surmounted. But it seems almost willfully naive to talk about mustering a congressional majority for impeachment without grappling with the deformation of our democracy that must be overcome first.

Moreover, as Ratner noted, even if the Democrats regained control of Congress, it is far from clear that they could summon the political will to mount an impeachment drive.

It's understandable, of course, that few wanted to dwell on how unlikely impeachment is under current conditions, both now and after November. The forum was a blast of civic outrage and a call to arms, not a sober exercise in political strategizing. In that way, it served its function: Just talking about impeachment in a respectable public forum legitimizes it. Still, if Bush must be impeached to save the republic, and if Bush almost certainly will not be impeached, where does that leave us?

Some of the panelists argued that if Bush is not removed, America's very foundations would rot beyond repair. "The American people are finally going to get it, I hope, about President Bush," said Holtzman. "And if they don't get it, what democracy will we have left?" Ratner spoke with similar urgency. "We're talking about moving from a republic to tyranny," he said. "It's getting too late. If this doesn't happen now, if we can't hold him accountable now, we're not going to get our liberty back."

Toward the end of the event, the gravity of America's dilemma led Lapham to speculate that even insurrection might be possible. It came in response to a question from an audience member who asked, "Are you willing to discuss the alternative that the American people have if they're faced with an illegal government because impeachment doesn't work? That alternative of course is for the people to overthrow the illegal government by the means that they consider necessary."

"I do think that it could easily get to the revolutionary stage, because I would expect the fight to be extremely ugly," Lapham said. "It might come to that. I don't think you're going to keep your democratic republic easily."

It was hard to tell if the applause that followed represented a flash of militant hope, or an acknowledgment of despair.