From Rove to DeLay to Ralph Reed, the Arizona senator's enemies have stumbled, clearing the way for his likely run. 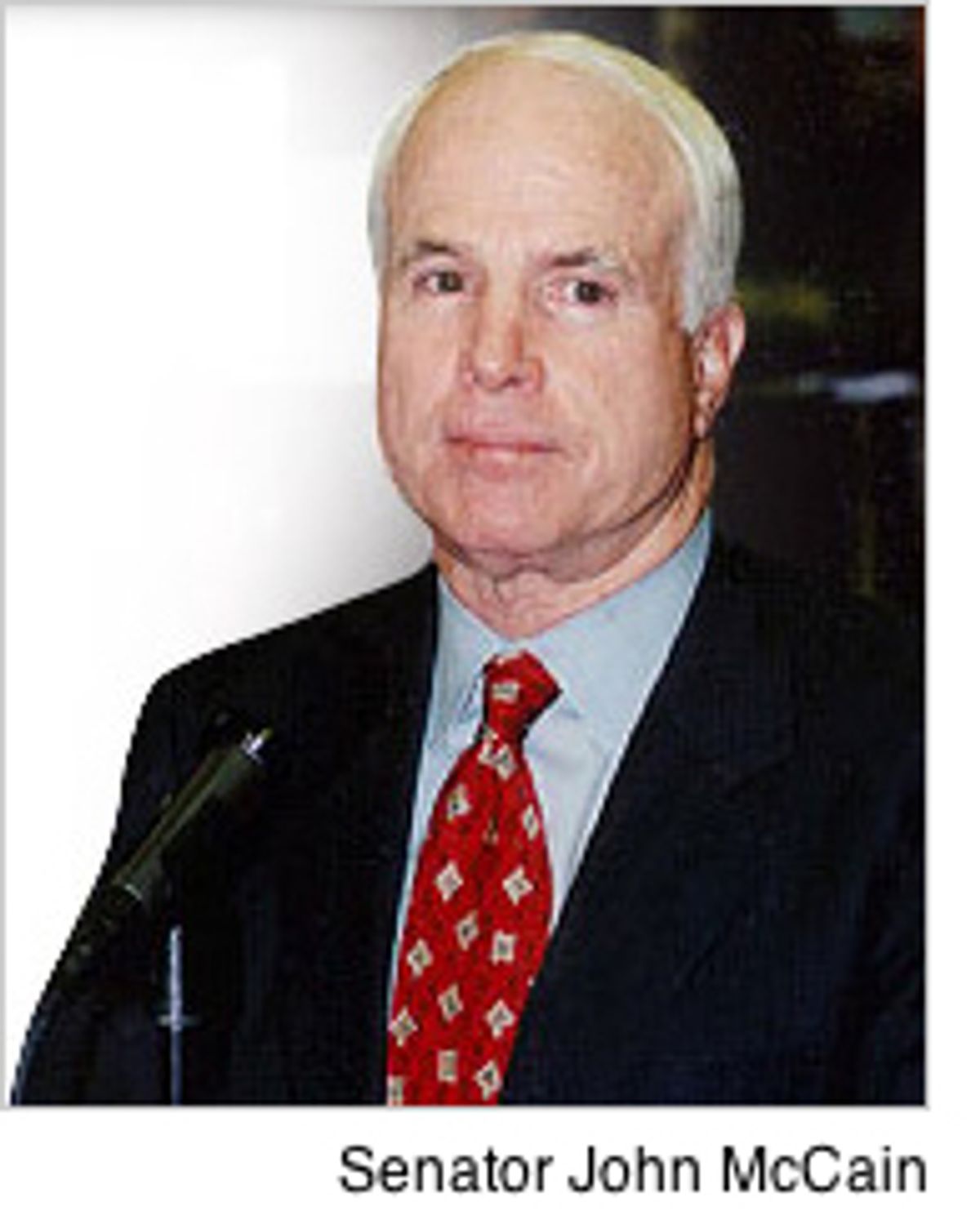 While Democrats gloat over the scandals besetting the Bush White House and congressional Republicans -- from the outing of Valerie Plame to the boodling of Jack Abramoff -- they are surely not alone in welcoming those multiplying embarrassments. For whether or not the president continues to plunge in the polls, and no matter how his party fares in the midterm elections, the seemingly endless avalanche of shame has improved the prospects of one very important Republican.

That would be John McCain.

For the past two years, the Arizona senator has seen his institutional adversaries in the Republican establishment brought low, one by one, clearing away the obstacles to his likely presidential bid in 2008. In some cases, their well-earned misfortune can be attributed directly to him; in others, he has merely observed their fortuitous ruin. What matters is that his worst, most effective enemies are distracted, disgraced or endangered by criminal investigations, and will be in no condition to threaten him in the foreseeable future.

That list includes White House Deputy Chief of Staff Karl Rove, former House Majority Leader Tom DeLay, former Christian Coalition director Ralph Reed, conservative activist and lobbyist Grover Norquist and a host of lesser Republicans in and out of elected office. The apparatus constructed by this group, which harnessed religious-right voters to corporate lobbyist cash, has been smashed. DeLay has been deposed from the leadership and is fighting for his congressional seat in Texas. Rove may be indicted soon by the special prosecutor in the Plame case for lying to the FBI and, even if he escapes that fate, will be exposed to public shame during the trial of Lewis "Scooter" Libby. Reed is sinking in the Georgia primary for lieutenant governor, and his formerly idolatrous followers in the religious right will never trust him again. Like Reed, Norquist is permanently tainted by his lucrative conniving with Abramoff.

Even if most of them never spend a day in prison, they have all seen their personal reputations and political capacity diminished. At the very least, they have been utterly discredited as critics of McCain.

These political bully boys certainly won't be able to mount the same kind of assault that bruised McCain so badly six years ago, when he and his family endured terrible defamation during the South Carolina primary. Although Rove and Reed left no visible fingerprints in those attacks, they have been universally suspected ever since of responsibility for the anonymous leaflets and telephone "polls" that accused McCain of fathering a black child out of wedlock, smeared his wife, Cindy, as a "drug addict," and insinuated that the senator had been driven to insanity and even treason during his wartime imprisonment by the North Vietnamese communists.

The whisperers slimed McCain after his triumph in New Hampshire and mobilized the religious right behind George W. Bush. For years the enmity between McCain and the conservative operatives has festered, even after he humbled himself with his opportunistic fawning over the president in 2004. As for DeLay -- who personifies the capital's bagman politics and did his best to frustrate the passage of the McCain-Feingold campaign reform act -- he and the Arizonan have made no secret of their mutual disdain.

To see them all brought low must delight McCain now. Did he foresee such pleasing developments back in early 2004, when he spurred the investigation of super-lobbyist Jack Abramoff by the Senate Indian Affairs Committee? He may not have imagined that a probe of the huge payments to Abramoff and his sidekick Michael Scanlon by several Indian tribes would eventually embroil Reed, Norquist and DeLay, among others. But the Washington Post's first investigative article about the tribal gaming scandal mentioned Abramoff's long-standing ties with DeLay and Reed, and noted that some of the millions bilked from the tribes had gone into the coffers of organizations associated with Norquist.

For McCain, those tantalizing references indicated that he could do well by doing good. Within weeks after that initial Post story, he announced his intention to investigate.

No doubt the greed and grossness of the Abramoff ring truly offended him, along with other politicians of both parties who supported the probe. His determination to expose a Republican scandal was certainly laudable and brave. And the spectacle of his enemies in distress could only have encouraged his persistence -- and his interest in promoting the story to his many admirers in the Washington press corps.

That interest extends beyond simple revenge. Already preparing for a run, McCain could be the most formidable Republican nominee in 2008, but he has long been deemed unacceptable by leading party conservatives on both personal and political grounds. Beyond his hated campaign reforms, the partisan right dislikes his dissenting views on global warming and the Pentagon torture scandal. His own hard-right positions on most issues, ranging from abortion rights and stem cell research to Social Security privatization, have not mollified his conservative critics. Their lingering distrust, which raises vivid memories of the beating he took in South Carolina, has convinced many analysts that he simply cannot win his party's nomination.

Yet the Republican Party, battered by scandal and war, is changing rapidly. John Boehner, the new leader of the worried Republican majority in the House, is said to be friendly with McCain. Bill Frist, the feeble and clueless Senate leader, is unable to control the members of his Republican caucus when McCain wants their support. The president, deeply unpopular and in need of allies, has reportedly lent his fundraising list to McCain's campaign apparatus.

None of that means McCain can expect to cruise into the White House. The leaders of the religious right are certain to oppose him vigorously -- and might encourage their voters to stay home on Election Day, or even mount a third-party effort to deny him the presidency. Many of the party's corporate financiers remain hostile as well. McCain's revolting embrace of Bush and his insistence on "staying the course" in Iraq may make him vulnerable to the same forces that are wrecking the Bush presidency. His hot temper and his physical health will be additional issues.

But several important obstacles have been removed or cut down to size. And he did quite a bit of it with his own little hatchet.