Not so fast, General

A bipartisan call by senators to halt the retirement of the major general at the heart of the Abu Ghraib scandal suggests the abuse inquiry finally has a pulse. 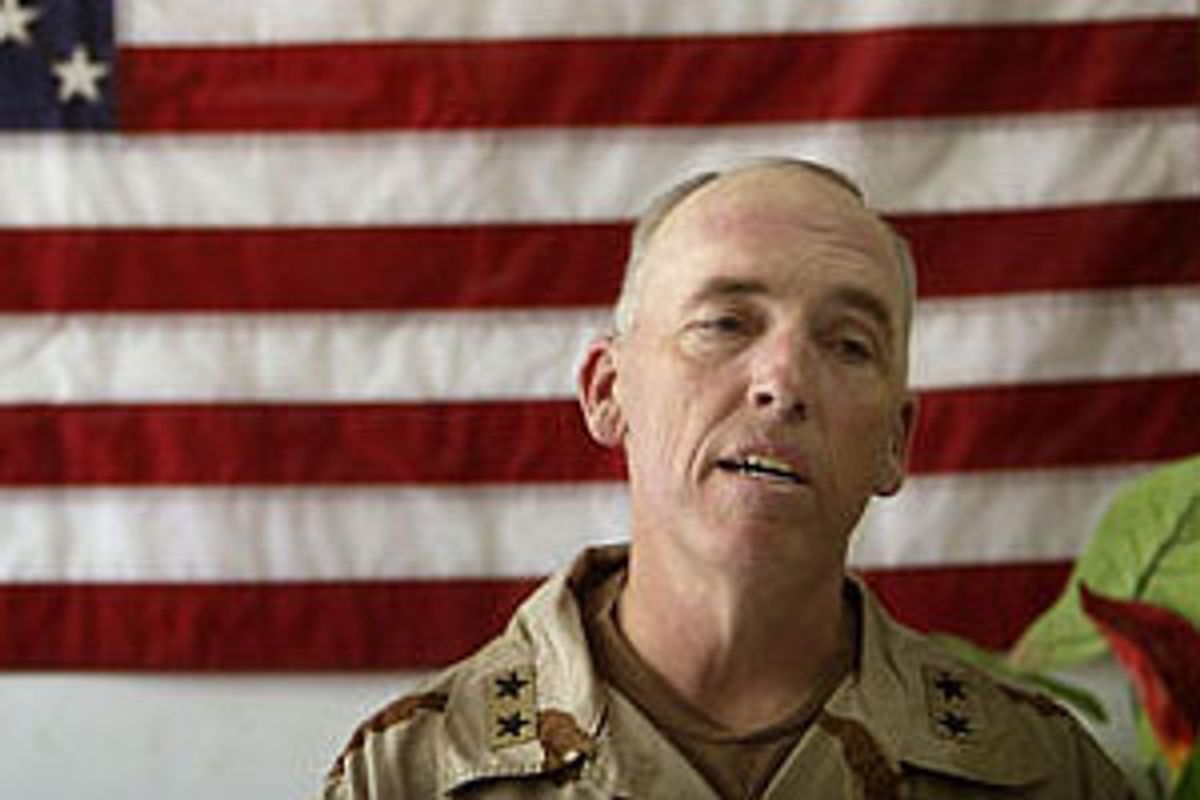 Geoffrey Miller, the major general at the center of the Abu Ghraib prison-abuse scandal, decided in January that he intended to retire after more than three decades in the Army. At the same time, Miller took the rare step of stating he intended to invoke the military equivalent of the Fifth Amendment against self-incrimination in the court-martial proceedings of two dog handlers from the notorious Iraqi prison. One court-martial starts next week and the other in May.

But Miller's retirement plans have been put on hold due to a joint letter sent to the Army by Senate Armed Services Committee Chairman John Warner, R-Va., and Carl Levin, D-Mich., the senior Democrat on the panel. Salon has learned that on Feb. 23 the two senators wrote Secretary of the Army Francis Harvey asking that Miller's retirement "be held in abeyance" until these two court-martial proceedings are completed.

The bipartisan Warner-Levin letter signals that Congress' anemic probe of abuse at Abu Ghraib might have a pulse after all. The topic has sparked little formal inquiry since an initial round of hearings were held during the spring of 2004, shortly after news accounts of the mistreatment of Iraqi prisoners aroused a public outcry. Miller, who had come to Iraq to help set up Abu Ghraib in late summer 2003 on a visit from running the detention facility at Guantánamo Bay, Cuba, last testified before Congress on the matter in May 2004.

A source close to the matter confirms that the Army has agreed to the senators' request to delay Miller's retirement. Miller's active-duty status makes it easier for the Armed Services Committee to compel Miller's testimony if the senators decide to hold new hearings to determine who was ultimately responsible for the mistreatment and, in some cases, torture of Iraqi prisoners at Abu Ghraib. Up until now, no one in the military above the rank of staff sergeant has been prosecuted in any case for the abuses at Abu Ghraib. A number of officers have received reprimands.

Army investigations have cleared Miller of wrongdoing concerning Abu Ghraib, though a military inquiry did recommend he be reprimanded in the case of detainee abuse at Guantánamo. (Miller's commander sent that recommendation to the Army inspector general. The results of that are confidential.) However, Eugene Fidell, the president of the National Institute of Military Justice, noted that it is much easier to prosecute an active-duty officer under the Uniform Code of Military Justice than someone who has retired from duty.

Human-rights groups, which have criticized the failure of the Army and Congress to aggressively investigate Abu Ghraib, have questioned the accuracy and completeness of Miller's public testimony. When told of the Warner-Levin letter, Hina Shamsi, a senior counsel at Human Rights First, said, "I'm really delighted that Congress is willing to act on this and is interested in looking into accountability."

While Miller's precise degree of responsibility is shrouded in mystery, it is known that the flagrant examples of prison abuse occurred after he visited there in 2003 with recommendations on setting up Abu Ghraib. He brought with him Guantánamo Bay interrogation guidelines and 200 pages of operating procedures that he used in Cuba. Miller had a particularly free hand at Guantánamo since the Bush administration consistently maintained that the Geneva Conventions did not apply to prisoners held there.

"We know that Miller was sent to 'Gitmo-ize' Abu Ghraib," said Shamsi. "And we now know of the abuses that followed."

The now-infamous phrase "GTMO-ize" originally comes from a claim by Brig. Gen. Janis L. Karpinski, who was nominally in charge of the military police brigade at Abu Ghraib. Karpinski has said that when she met with Miller during his initial visit to Abu Ghraib in September 2003, Miller told her he was going to "Gitmo-ize" the prison.

But according to the transcript of an Aug. 21, 2004, interview of Miller obtained by Salon, Miller claims that Karpinski is mistaken in her recollection. During the interview conducted by attorneys representing some of the soldiers prosecuted for abuse at the prison, Miller said, "As far as I know, I never used the word 'Gitmo-ize,' ever."

Warner's and Levin's sudden interest in delaying Miller's retirement may have its roots in a 2003 conversation about the use of dogs at Abu Ghraib. Col. Thomas M. Pappas, who had been the commanding officer at the prison, in January accepted immunity and was ordered to testify in the upcoming dog handlers' courts-martial. Soon after the Pappas deal, Miller decided to invoke his military Article 31 rights not to incriminate himself in the dog handlers' legal proceedings.

At issue is a conversation that Pappas and Miller recall in diametrically different fashion. During Miller's August-September 2003 visit to Abu Ghraib, both men agree they discussed the use of dogs in the prison. After the 2004 release of horrifying photos of detainees being threatened by vicious dogs, Pappas told Army investigators that during that talk, Miller had told him that dogs "were effective in setting the atmosphere for interrogations."

But Miller insists that he told Pappas that dogs could not be used in interrogations but rather only to help keep order in the prison and reduce the risk of detainees' getting violent. Miller told Army investigators that he decreed that dogs could only be used for "detainee custody and control issues" and not interrogations.

This is not the only intriguing discrepancy in the Miller saga. The Chicago Tribune noted that Miller told the Senate Armed Services Committee in May 2004 that after his visit to Iraq in 2003, he had not briefed Defense Secretary Donald Rumsfeld nor his top aides. But in his August 2004 interview, obtained by Salon, Miller said he gave two of Rumsfeld's senior aides -- then-Deputy Defense Secretary Paul Wolfowitz and Undersecretary for Intelligence Steve Cambone -- a briefing on his visit and subsequent recommendations.

Now that Miller's retirement is on hold, Congress may get another chance to ask him to clarify the many mysteries that still surround Abu Ghraib.