The most inventive, original reality show on television unravels in its eleventh hour by crowning a bland, conventional winner. 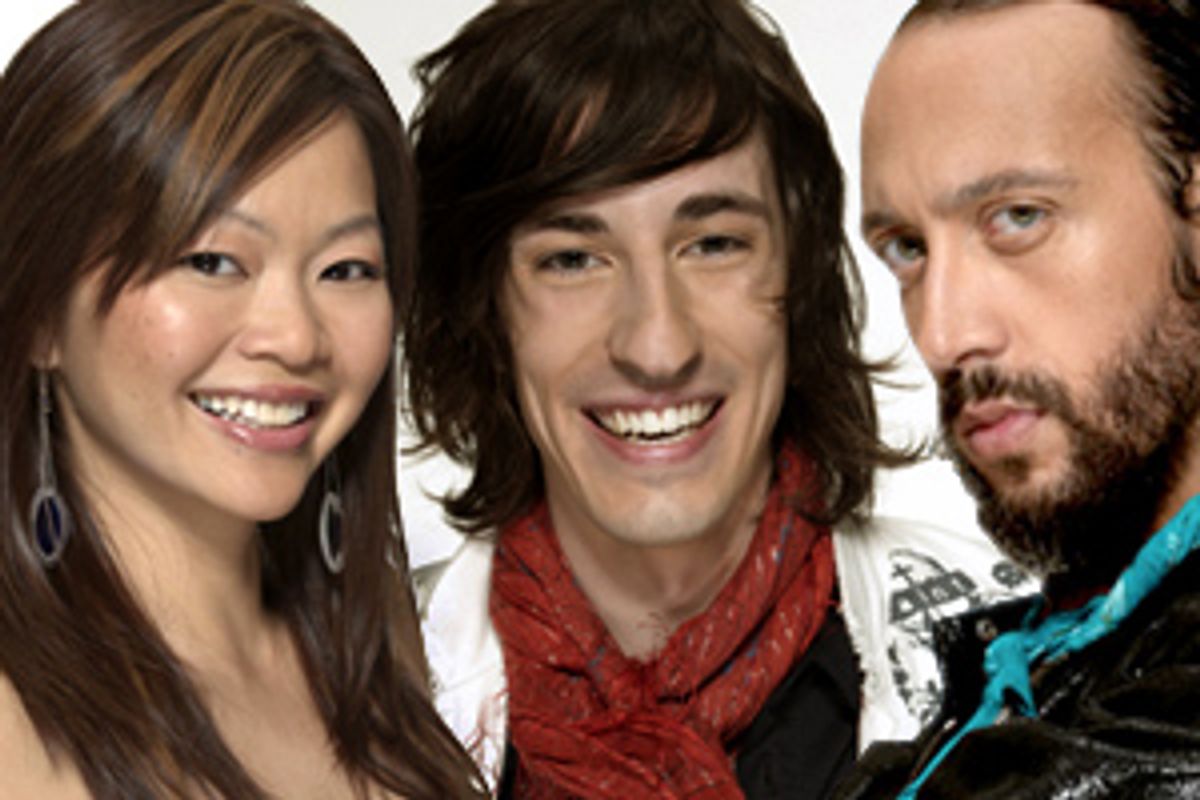 Wednesday night, the only reality show that awards real creative talent, inventiveness and originality crowned a skilled but conventional designer as its winner. For the finale of Bravo's "Project Runway," Chloe Dao, 33, descended on New York's Fashion Week armed with a terrifying heap of dresses -- a bunch of unremarkable flowery frocks and a few shiny, hot pink satin dresses with matching jackets that would look utterly at home on a Superstar Barbie doll. Competitor Santino Rice, 30, who previously said that Chloe was a "brilliant patternmaker" but just a so-so designer, sniped of Chloe's collection, "It looked like a couch was coming at you." Or a girls basketball team in terrible prom dresses. Or a herd of Ukrainian whores.

Chloe summed up her collection as simply "stuff that I really love!" because clearly she was hesitant to offer a more descriptive summary, such as, "What it might look like if someone planted a bomb in Joan Collins' walk-in closet."

Since that probably sounds a little extreme, let's turn to Tim Gunn, the show's resident design and fashion genius, for a different perspective. On his blog, after admitting that he was surprised by Chloe's heavy fabrics and perplexed by her "poofy sleeves," Gunn wrote, "My overall impression was that the customer for the collection would be an older, mature individual (can we all scream 'Wendy Pepper') and that Chloe's home state of Texas would be an appropriate market." What a gentle, sweet way of saying that the whole collection belonged in the local Chico's chain at the mall.

Gunn did write that Chloe's construction was "flawless" (see also: brilliant patternmaker, so-so designer). That fits, since Chloe's designs have been capable but dull since the first challenge. While fellow finalists Santino and Daniel Vosovic, 24, took risks and created sometimes amazing, sometimes bizarre, always surprising designs, Chloe churned out the same simple sundresses and triangle shapes over and over again, which the judges for some reason greeted with appreciative cooing.

Sadly, Daniel and Santino made it easy on Chloe by keeping their odd and inventive urges under wraps. Daniel trotted out a very stylish and beautiful line including some stunning coats, lovely tops and a few rather bland separates that looked like they belonged on Banana Republic's sales racks. Santino had a few really beautiful pieces -- a flowing, ruffled dress made of a muted multicolored fabric and two sleek, memorable gowns -- but his overall vision was far less clear than it had been on previous challenges. The wit and sense of play in Santino's previous work were nowhere to be seen.

Where were the boldness and outsize daring of first-season winner Jay McCarroll? Why did all three finalists find it was necessary to scale back their visions and create pretty stuff instead of going for big, haughty, crazy designs that viewers and Fashion Week devotees would never forget? My suspicion (and this is totally unsubstantiated speculation, mind you) is that the contestants found out that the judges and producers were looking for a winner whose big ideas and wild notions would never stand in the way of their ability to make a buck in the business. And who better to bring home the bacon than a brilliant patternmaker who's already running a clothing business? When you ask Chloe about her designs, she doesn't talk about creating strange, cool stuff for "the ugly girls" like McCarroll does, she doesn't talk about sweatshop workers and hemp and not wanting to create clothes for filthy-rich housewives, she doesn't talk about refusing to sell out or compromise. She says that this is her baby, her dream, that she's a "designer-slash-marketer" and that she has the business sense to make it a reality. If this is the new direction of "Project Runway," arguably the most intelligent, clever, unique, talent-friendly reality show on TV, they might as well go ahead and change the name to "The Apprentice: Michael Kors" right now.

At least one person emerged from the second season of "Project Runway" happy and content -- Chloe Dao. After her win, Chloe responded to Santino's previous comments about her averageness as a designer: "I can only say that I guess you're wrong! I can't help it if I had skills, honey." So there. Or as Blair on "The Facts of Life" more cleverly put it, "Turn blue!"

Chloe's flaccid comeback to Santino's cutting but accurate observation embodies the deflated spirit of the "Project Runway" finale. Here's hoping that in the third season, the judges will go back to honoring originality and vision, and leave the really skilled patternmakers to appear on "Project Bridesmaid" where they belong.