An Army Reserve captain who supervised Charles Graner says higher-ups were to blame for prison abuse. 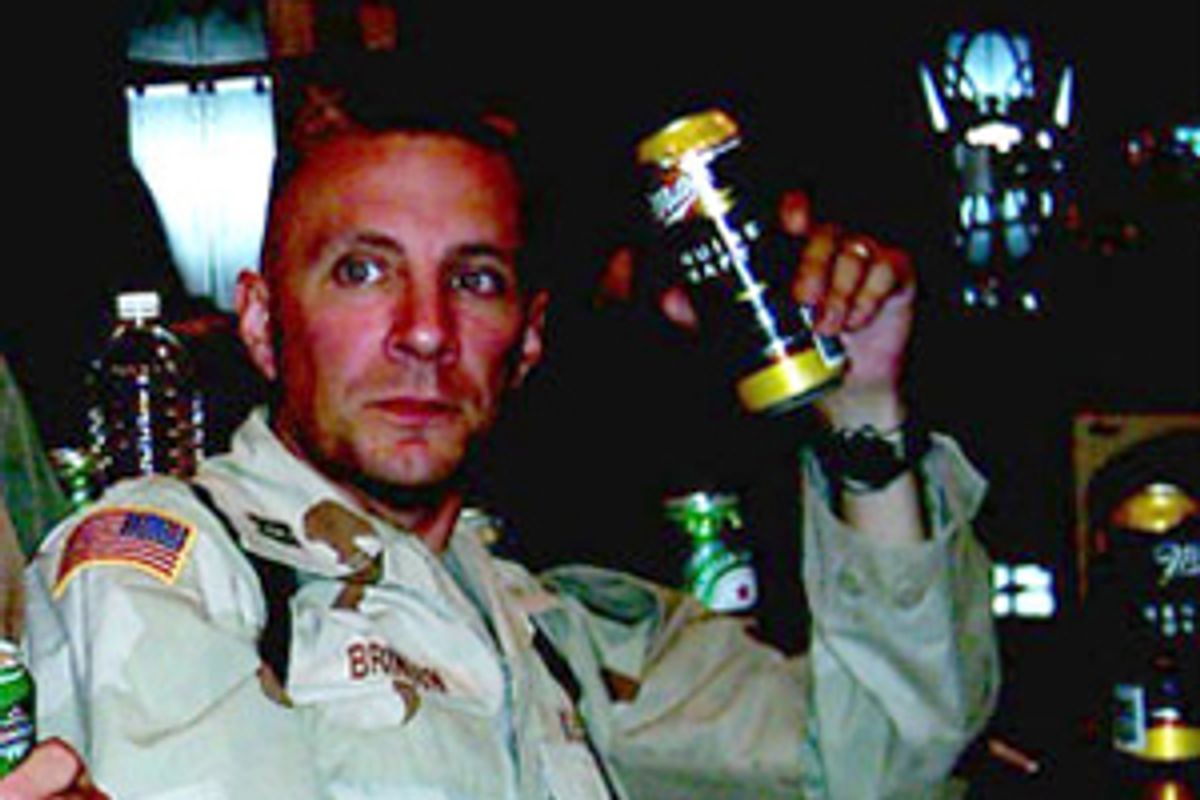 A senior staffer to a Republican congressman revealed Thursday that he has been formally reprimanded by the Army for his role in the Abu Ghraib detainee abuse scandal -- and that he is fighting the disciplinary move. He says that higher-ups were responsible for the treatment of prisoners at Abu Ghraib.

U.S. Army Reserve Capt. Christopher R. Brinson, who in civilian life works as the deputy chief of staff for Alabama Republican Rep. Mike Rogers, was directly in charge of some of the military police later prosecuted for abuse at Abu Ghraib during the notorious autumn of 2003. Brinson received the reprimand in January 2006, but it had not been revealed publicly until his attorney, David P. Sheldon, confirmed it to Salon Thursday, noting that Brinson has since submitted a rebuttal to the Army. The attorney would not reveal the exact reason for Brinson's punishment.

Through Sheldon, Brinson told Salon that he was unaware of his soldiers' actions, and blamed superior officers for what happened at the prison.

"The responsibility for the command and control of the facility, and for the treatment of detainees, rests entirely with individuals well above him in the command structure," Sheldon said in a statement to Salon. "The command structure that Captain Brinson inherited at Abu Ghraib was not of his making. Nor was the treatment of detainees something that members of his unit initiated. Captain Brinson had no knowledge while he was at Abu Ghraib of conduct by certain soldiers that subsequently led to criminal prosecutions of those soldiers," Sheldon's statement says. "At all times, Captain Brinson's service to the United States Army has been and will remain honorable."

Rep. Mike Rogers, who sits on the House Committee on Armed Services, had no comment, according to his chief of staff, Marshall Macomber. "This is an internal issue for the department of the Army," Macomber said.

Brinson supervised Military Police Cpl. Charles Graner Jr., who is often portrayed as the ringleader of abuse. In January 2005, Graner was sentenced to 10 years in a military prison. Brinson first came to public attention in August 2004, with the publication of a memo he sent Graner, telling him he's doing a "fine job" and that Graner has "received many accolades from the MI [military intelligence] units here." A photo of Brinson, with his name tag visible, showed up among Army Criminal Investigation Command materials obtained by Salon last month. The source who provided those documents, a uniformed member of the military who was present at Abu Ghraib and is familiar with the CID investigation into detainee abuse there, said the photo captured Brinson in Iraq.

Brinson's fight against his reprimand and his allegations about the higher command show the Abu Ghraib legal saga is far from over. In the coming weeks, two Army dog handlers will face courts-martial at Fort Meade, Md. The former commander of military intelligence at Abu Ghraib, Col. Thomas M. Pappas, was granted immunity from prosecution in exchange for his testimony at those trials. A CID spokesman, meanwhile, told Salon that the agency has reopened its investigation into Abu Ghraib, which had been closed since October 2005. CID would not say why. Also this week, Salon learned that two senators blocked efforts by Maj. Gen. Geoffrey Miller, a leading figure in the scandal, to retire, because it is easier to further question an active-duty officer. The Army complied with the senators' request.

So far, nine enlisted soldiers have been prosecuted for abuse at Abu Ghraib, according to the Army. In addition, four soldiers and eight officers, including Brinson, have not been prosecuted, but have been formally reprimanded. On Thursday, Brinson joined a growing chorus of those enlisted soldiers and officers who say responsibility for what happened to detainees at Abu Ghraib goes higher than them.

Several Army investigations have found that military intelligence, civilian contractors and CIA personnel instructed military police to set the conditions for interrogations at Abu Ghraib by treating detainees harshly, a situation that the investigations found contributed to abuse.

In return for immunity, Graner conducted an interview with the Army's Criminal Investigation Command in April 2005, to discuss the role of the chain of command. Salon has obtained a 307-page transcript of that interview, in which Graner describes stripping, shackling, sleep depriving, screaming at and harassing detainees to set those conditions. Some of the shocking images from Abu Ghraib were part of the process of softening up detainees for military intelligence, according to Army reports.

In the April interview with CID, Graner said Brinson instructed him to follow the orders of military intelligence, even though Graner claims to have complained about the harsh tactics.

Graner said he told Brinson, "MI wants us to do this. That's not our job." According to Graner, Brinson replied, "Hey, our mission is to support MI. Do what they tell you to do."

According to a handwritten log kept by the military police at the prison, obtained by Salon, Brinson may have dialed back abuse ordered in one instance by interrogators. A Nov. 14, 2003, entry notes an order to "strip out" and exercise six detainees. But those orders "were changed by Capt. Brinson," Graner wrote. Instead, Brinson ordered that the detainees remain in their cells "in jumpsuits."

In an April 2004 statement by Brinson to the CIA Office of the Inspector General, also obtained by Salon, Brinson admitted his role in the curious handling of Manadel al-Jamadi, a detainee who died during a CIA interrogation at Abu Ghraib in November 2003. The Armed Forces Institute of Pathology ruled al-Jamadi's death a homicide, caused by "blunt force injuries complicated by compromised respiration."

According to Brinson's statement, because of his position of authority at Abu Ghraib, he was awakened early on Nov. 4, 2003, after al-Jamadi died during CIA interrogation in a shower at the prison. Brinson said he arrived in the shower at Abu Ghraib to find a nervous CIA interrogator who said, "This guy just died on us." Brinson said al-Jamadi was lying on the ground face up with a bloody eye that Brinson was told could have come during an earlier struggle when al-Jamadi was captured. Brinson said he saw blood on the floor, according to the CIA report.

Brinson said that at the request of the CIA, he ordered his military police to put al-Jamadi's body in a body bag and fill it with ice until the CIA could arrange to move him.

Brinson also said he ordered the military police to clean up the scene, according to an account by an agent with the CIA Office of the Inspector General. "Brinson advised that he might have ordered the MPs ... to clean the blood smudge from the cell's floor," the agent's account related. Brinson said he ordered the room cleaned to avoid biological hazards.

The next day CIA ordered the removal of al-Jamadi's body by putting him on a stretcher with an IV in his arm so he would appear only ill, not dead.

Also on Thursday the Pentagon announced that it would close Abu Ghraib and move detainees to other sites in Iraq.