Two greats join forces for "A Prairie Home Companion" the film -- with a little help from Streep, Tomlin, Reilly and an enthusiastic Texas crowd. 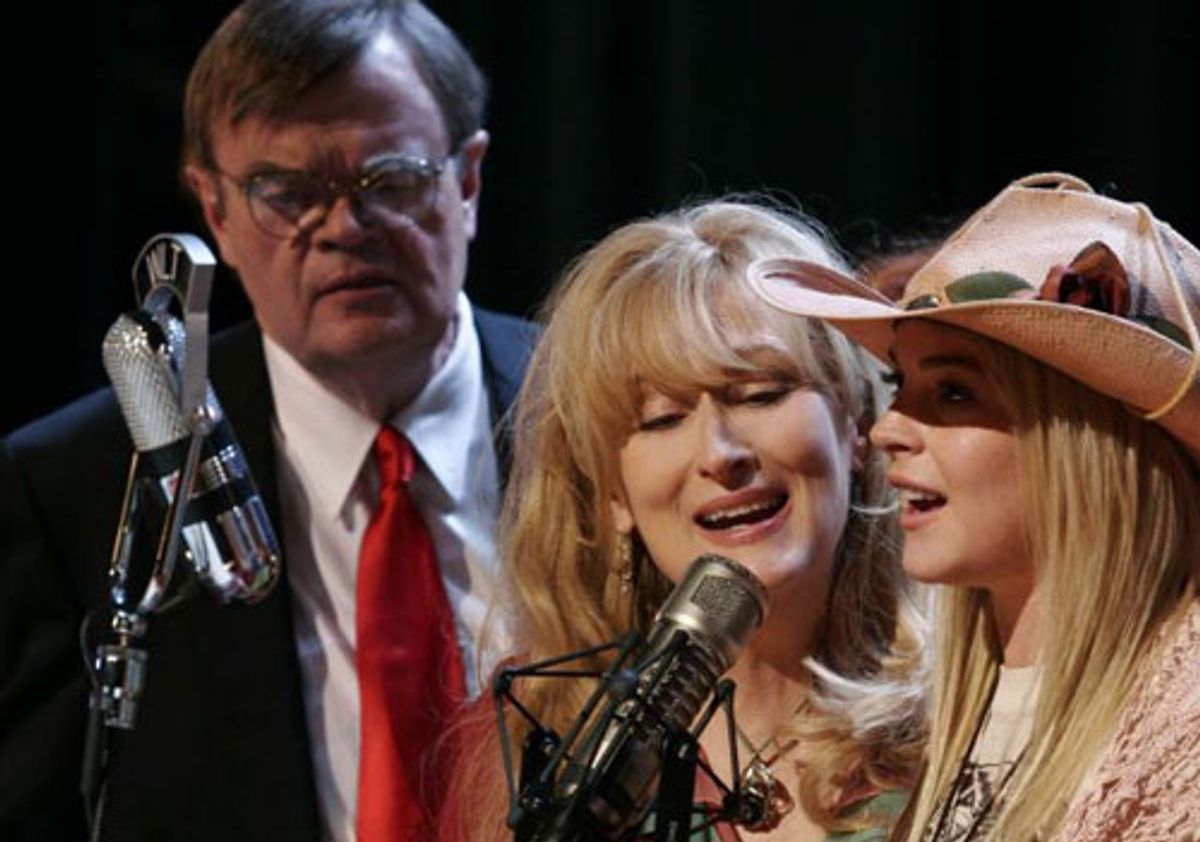 Spring has sprung in central Texas, if any normal person considers 87 degrees at noon to be springtime. The big shade trees and waterways of the Lone Star State capital are bursting with a startling cacophony of migratory birds and waterfowl, and the sunburned panhandlers working the highway and boulevard intersections have reverted to cutoffs and tank tops (if they ever wore anything else). I don't know whether these people are castaways of the Bush economy or a permanent feature of the landscape, but you can see more white people begging here in a single afternoon in south Austin than you can see in New York in a month.

Another sign of spring in Austin is the kickoff of the South by Southwest festivals, ambiguous showcases of indie culture that seem to be loved and loathed by locals in almost equal quotients. (They have put Austin on the map as a cultural destination and, well, they have put Austin on the map as a cultural destination.) SXSW's legendary musicfest, now in its 20th year, doesn't begin until next week, but I wouldn't be qualified to tell you much about that in any case. The fast-rising SXSW Film Conference and Festival, which began 13 years ago as an offshoot of the musicfest but has long since acquired its own identity, opened on Friday night with a packed house at the Paramount Theatre hooting and hollering for virtually every frame of Robert Altman's new film, "A Prairie Home Companion," screened here in its North American premiere.

From the stage of the Paramount, a gingerbread-laden movie palace (originally built in 1915 and remodeled in the '30s) that has been lovingly preserved, festival director Matt Dentler told us that as soon as he heard that Altman and "Prairie Home Companion" radio host Garrison Keillor were working together, he'd thought that he couldn't imagine a more perfect SXSW opening-night film. Maybe that says it all. Nobody would claim that SXSW's film festival has the glamour, the buzz or the marketplace impact of Sundance or Cannes or Toronto. (And nobody can claim that its roster of films is quite as impressive.) But even as it has gotten bigger and more oriented to the indie-film industry, SXSW is still admired for its modesty, its integrity and -- this is the only word for it -- its niceness.

"That's the real reason everybody comes here," Doug Block, director of the family documentary "51 Birch Street," told me at the party after the "Prairie Home Companion" screening. "It's just such a pleasant experience. I didn't want to take my film to Sundance this year. I didn't want the angst, or that feeling of incredible high stakes." (That said, his film comes to Austin with a strong buzz attached, and of course he's eager to sell its distribution rights. I haven't seen it yet, so more on that later.)

With no feeling of high stakes attached to SXSW, there's something more like a relaxed coffeehouse vibe. At first glance, this festival and this city seem to go together, as institutionalized versions of alt culture in its friendliest and least threatening form. A few hours after we got here, my wife said it felt as if the culture of early-'90s San Francisco had been frozen in time. I'm sure that's not entirely fair; the films programmed this year include a smattering of avant-garde efforts, horror movies and foreign cinema, but the overwhelming emphasis is on personal films (whether narrative or documentary) made in that distinctive, low-key indie-American vernacular. There are worse things.

Altman was in London directing a play, so Keillor mumbled a few inaudible comments from the Paramount stage before disappearing. I tried to find him after the movie, and he was nowhere in sight. (Someone who sat close to the stage told me that he had quipped that the only documentary he was willing to make about "Prairie Home Companion" was one that wasn't true.) The audience clapped politely for Keillor, but erupted in cheers for John C. Reilly, who plays a small part in the film and has a local connection that was never made clear to outsiders. Reilly's every appearance as a singing cowboy named Dusty (one-half of a duo with Woody Harrelson) was also marked by whoops that masked the dialogue for several seconds at a time.

And as for the combination of Altman and Keillor, well, why didn't either of them think of this before? "A Prairie Home Companion" is both loopy and dense, taking Keillor's nostalgic and geeky radio program and making it even cornier and more sentimental than it is in reality -- and somehow, that's perfect. No doubt my colleague Stephanie Zacharek will want to review this on release (and she's much more of an Altman expert, and fan, than I am), but I enjoyed this more than any Altman film since at least "Short Cuts," and the response from the youngish SXSW crowd was genuinely enthusiastic. Here's the odd premise: This isn't a documentary, or a fake one, but a narrative film in which Keillor's show is facing its last night ever. The radio network is being shut down by an evil corporation from Texas (!), and its home, the historic Fitzgerald Theater in St. Paul, Minn., will be demolished for a parking lot.

As in any Altman film, the joy lies in the dense weave of characters, nearly all of them fictional. Keillor's script imagines that his show remains connected, in 2006, to an entire circuit of radio variety programs and vaudeville tours that is only recently defunct (as opposed to, say, 50 years defunct). So while the singing Johnson Girls of Oshkosh, Wis., Yolanda (Meryl Streep) and Rhonda (Lily Tomlin), are presented as showbiz dinosaurs, the idea is that at some point in the not-too-distant past they were as big as -- well, OK, not as big as the Carter Family, but maybe almost as big, if you happened to live in rural Wisconsin, Minnesota and the Dakotas.

Streep and Tomlin nearly steal the whole picture, but there's also Reilly and Harrelson as potty-mouthed cowhands, Kevin Kline as a thoroughly inept private eye trying to save the show from its apocalypse, Keillor's self-mocking self-portrayal as a guy never able to confront emotion or wrap up his shaggy-dog stories, and Virginia Madsen as the Angel of Death. No, I'm not kidding. At first "Prairie Home Companion" seems just like delightful whimsy, almost too fast and funny to keep up with. But toward the end Keillor and Altman bring out something in each other, perhaps a note of profundity the work of each has sometimes seemed to lack. Neither of these guys is a spring chicken at this point in his career, and you can only make so many eccentric movies or deliberately old-fashioned radio programs before you feel the brush of the angel's wings.

Outside the Paramount on North Congress Avenue, with the Texas State Capitol looming above us, excited knots of minglers gathered. Keillor was nowhere to be seen, and Altman had never been there at all -- when you can skip the premiere of your own movie, I guess you're comfortable with where you are in your life. The after-party was around the corner at a pool hall on Sixth Street, the heart of Austin's "entertainment district," which meant navigating throngs of buzz-cut boys in their best polo shirts and disconsolate-looking girls in spaghetti-strap tops spread with spangles. Reilly passed through the crowd with a kind of wake behind him, signing autographs and pumping hands, a veritable green god of the Texas spring among lesser mortals. It was 73 degrees at midnight.