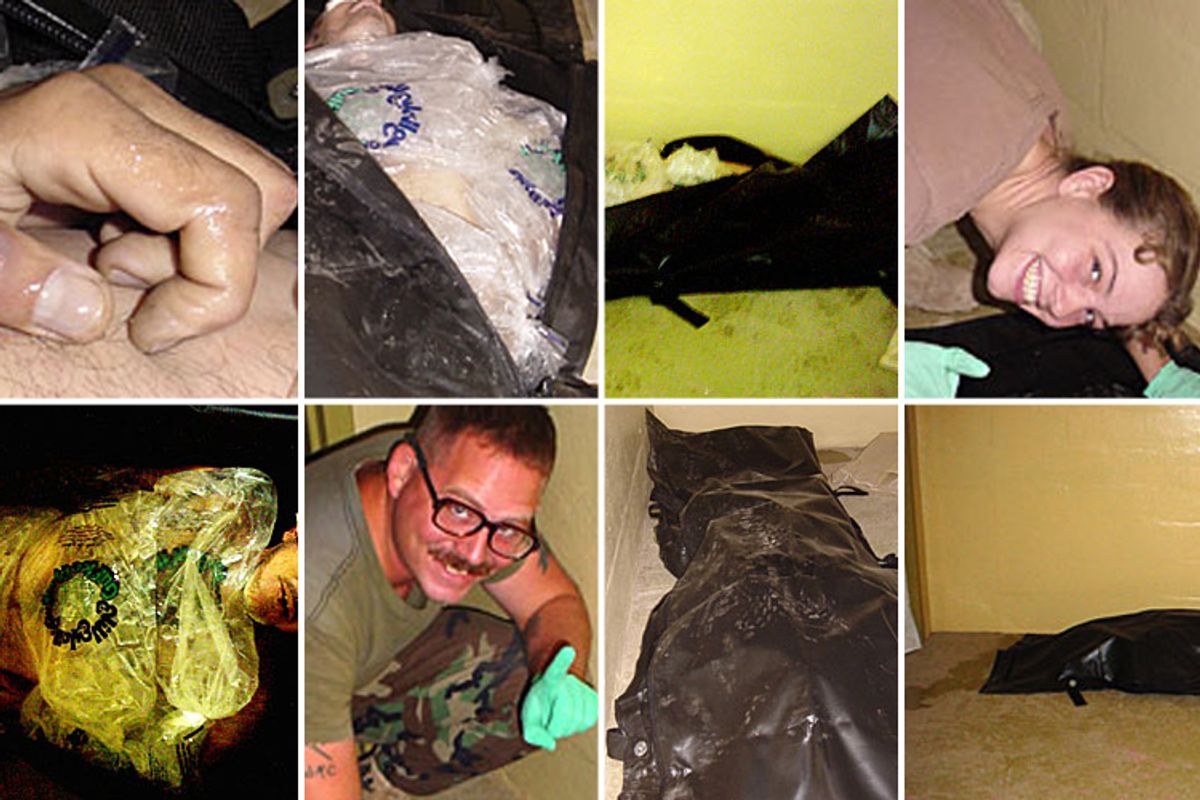 On the night of Nov. 4, 2003, someone in the military intelligence wing at Abu Ghraib wrote an entry in the military police logbook: "Shift change normal relief 1 OGA in 1B shower not to be used until OGA is moved out."

In military lingo, OGA stands for "other government agency" and denotes clandestine operations conducted independent of the military chain of command. At Abu Ghraib, OGA referred "almost exclusively" to the Central Intelligence Agency, according to the investigation by Maj. Gen. George R. Fay. According to logbook entries, OGA detainees sometimes accounted for roughly one-fifth of the 30 to 50 inmates included in the daily head count in the military intelligence wing.

Military police told investigators that they believed CIA personnel followed their own rule book. "You know these guys can kill people," Graner said in an April 2005 statement to the Army Criminal Investigation Command (CID). "The OGA guys do whatever they want. They don't exist."

Several Army and Department of Defense investigations found that the CIA presence may have contributed to the abuse committed by military police. "There was at least the perception, and perhaps the reality, that non-DOD agencies had different rules regarding interrogation and detention operations," an investigation report by Lt. Gen. Anthony R. Jones concluded. "Such a perception encouraged soldiers to deviate from prescribed techniques."

A subsequent CID investigation showed that the OGA detainee entered into the logbook was Manadel al-Jamadi, an Iraqi man who had been detained by the CIA. According to the investigation, al-Jamadi had been captured by a Navy SEAL team, which suspected him of involvement in an attack against the Red Cross. "He was reportedly resisting arrest, and a SEAL Team member butt-stroked him on the side of the head to suppress the threat he posed," the Fay report found. Two CIA operatives brought al-Jamadi to Abu Ghraib shortly after 4:30 a.m. on Nov. 4.

On April 7, 2004, Sgt. Walter A. Diaz, a military police soldier on shift at the time al-Jamadi arrived, gave a statement to the CIA Office of Inspector General (OIG), which was later obtained by Salon. He described al-Jamadi walking into the prison under his own power. Diaz said that al-Jamadi was wearing a shirt, but no pants, and appeared to be shivering from the cold. Diaz said he had helped to shackle al-Jamadi, at the direction of the OGA, to a window in the shower room in preparation for interrogation.

"They used two pairs of handcuffs and secured Al-Jamaidi [sic] in a standing position with his arms over and behind his head," the CIA OIG reported. Some time later, Diaz said the OGA agents asked him to return to the shower room to reposition al-Jamadi higher on the window. Diaz said he remembers the OGA interrogator telling him, "This guy doesn't want to cooperate." Diaz reported that at this point, the detainee's face was swollen and deformed, and he was bleeding from the mouth. Diaz said he also realized that al-Jamadi no longer had a pulse.

The Armed Forces Institute of Pathology later ruled al-Jamadi's death a homicide, caused by "blunt force injuries to the torso complicated by compromised respiration." According to the report by Maj. Gen. George R. Fay, al-Jamadi's death occurred less than an hour after his arrival at the prison.

Military police Capt. Christopher R. Brinson also gave a statement, on April 5, 2004, to the CIA OIG, which was obtained by Salon. He said he reported to the shower area on the morning of Nov. 4, 2003, where a CIA interrogator and a translator were waiting next to al-Jamadi's body. According to the interview with the CIA inspector general, Brinson told investigators that "the interrogator seemed shaken up and had said something like, 'The guy just died on us.'" At that point, according to Brinson, al-Jamadi was lying on the ground face up. One of his eyes was bloody, and there was a smudge of blood on the floor about the size of a man's palm. Brinson said there were ligature marks on al-Jamadi's wrists consistent with the handcuffs used during interrogation.

At the direction of an OGA official, Brinson said, he ordered the military police to put al-Jamadi's body in a bag and pack it with ice. The body was left in the shower room overnight, and a notation was made in the military logbook.

According to Graner's April 2005 testimony to CID investigators, shortly after he and Harman came on the night shift, he remembered noticing that an odd fluid was leaking out of the 1B shower into his office. He said he pulled a spare key he had to the shower room and opened the door. Graner said that there, on the far side of the room, he and Harman saw a sealed body bag leaking fluid across the floor. "We opened it up and looked at it," Graner said. "No one told us not to go into the shower."

Graner and Harman decided to pose for pictures with the body. At one point, Harman gave a thumbs-up sign above the Iraqi's mutilated face. A close-up shot was taken with Harman's camera of the dead man's thumb, which had bruising that Graner said he found "out of the ordinary." Graner said he cleaned up the leaking fluid with cleaning crystals and chlorine.

The next morning the CIA directed the removal of al-Jamadi from the prison by placing him on a stretcher and placing an I.V. in his arm, according to Brinson's statement. The goal, according to the Fay report, was to make it appear as if al-Jamadi "was only ill, thereby not drawing the attention of Iraqi guards and detainees."

Both Fay and Jones concluded that this working relationship between OGA and military personnel, without any formal written arrangement, directly put Army soldiers at risk of breaking the law. "It is clear that the interrogation practices of other government agencies led to a loss of accountability at Abu Ghraib," concluded Fay and Jones in a joint introduction to their reports. "Soldiers/Sailors/Airmen/Marines should never be put in a position that potentially puts them at risk for non-compliance with the Geneva Convention or Laws of Land Warfare."

"LTC Jordan became fascinated with the 'Other Government Agencies,'" the Fay report said. "LTC Jordan allowed OGA to do interrogations without the presence of Army personnel." As a result, Fay concluded, Jordan "did not help the situation," contributing to a sense among soldiers and civilians that they did not need to follow Army rules.

On Feb. 24, 2004, Jordan gave a statement to Maj. Gen. Antonio M. Taguba about the al-Jamadi death. Jordan said he had been instructed to work with OGA by Col. Thomas M. Pappas, the head of military intelligence at Abu Ghraib, because of Jordan's "clearance level back at Langley" -- a reference to CIA headquarters in Virginia. Jordan's military records show he is a specialist in tactical and strategic intelligence.

After al-Jamadi's death, Jordan told Taguba that he remembered Pappas saying, "Well if I go down, I'm not going down alone. The guys from Langley are going with me." To date, no criminal charges have been filed against any CIA personnel for the death of al-Jamadi.