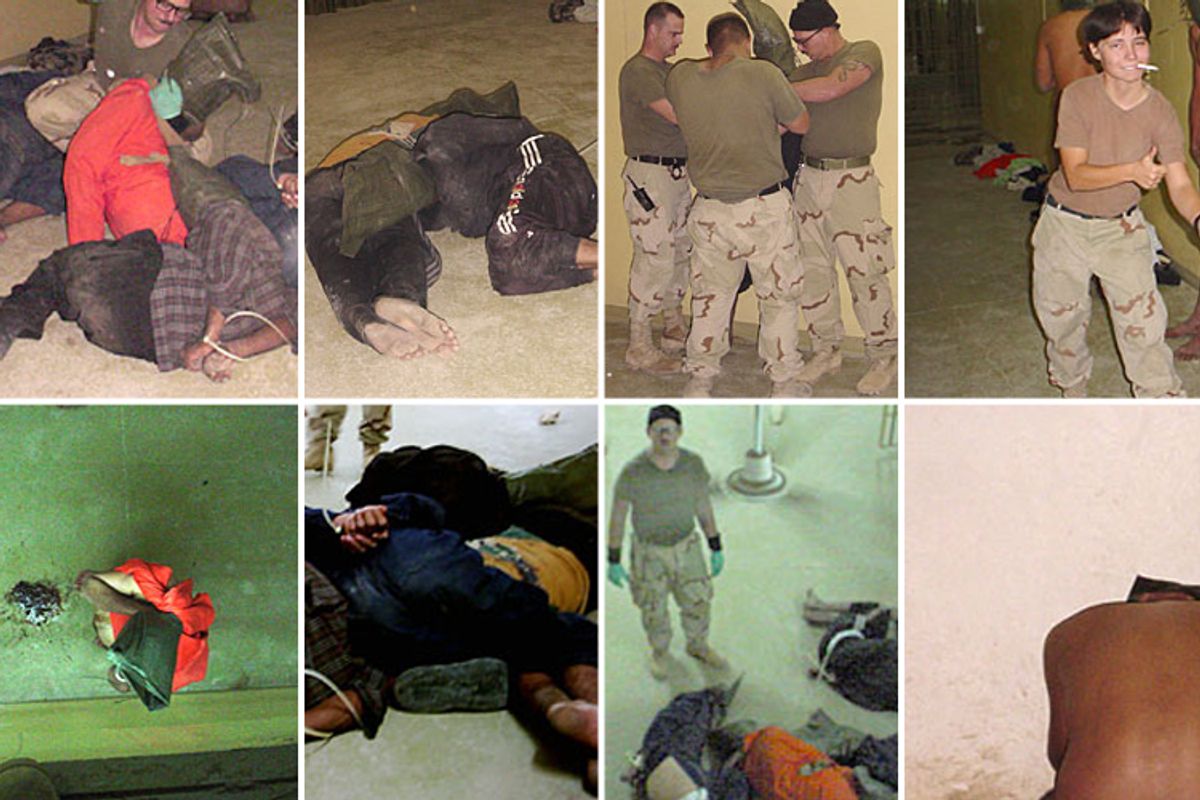 At approximately 7 p.m. on the night of Nov. 7, military police at Abu Ghraib noted in their logbook that a riot had broken out at Camp Ganci, a detainee facility that was part of the Abu Ghraib complex. In response, the military intelligence wing was put in a state of lockdown. Word filtered through that a detainee had managed to escape, according to the log. At 10:15 p.m., it was noted in the log that the military police had received "seven inmates from the Ganci Riot."

For at least two hours, these seven suspected rioters were subjected to some of the worst documented abuse at Abu Ghraib. They were verbally abused, stripped, slapped, punched, jumped on, forced into a human pyramid, forced to simulate masturbation, and forced to simulate oral sex, several Army reports concluded. The Army's investigation identified Frederick, Graner, Harman, Sgt. Javal S. Davis, Spc. Megan Ambuhl, Sivits and England as involved in the abuse. "CPL Graner knocked at least one detainee unconscious and SSG Frederick punched one so hard in the chest that he couldn't breath and a medic was summoned," a report by Maj. Gen. George R. Fay found.

England told the Army's Criminal Investigation Command (CID) on Jan. 14, 2003, that she had visited the military intelligence wing in the early morning hours of Nov. 8, because it was her birthday and she wanted to see her friends. She said Graner and Frederick told her they were bringing in seven prisoners from a riot at Ganci. "The prisoners were brought in in handcuffs and bags on the heads and wearing civilian clothes," England said. She said she initially watched the ordeal from a higher tier. "Everyone else was downstairs pushing the prisoners into each other and the wall. Until they all ended up in a dog pile." Later, England was photographed smiling and pointing at naked detainees.

Sivits told CID investigators on Jan. 14, 2004, that he believed he saw Davis run across the room twice and jump on the pile of detainees. "A couple of the detainees kind of made an AH sound as if this hurt them or caused them some type of pain," Sivits said in his statement. The Fay report concluded that Davis, Frederick and Graner all jumped on the detainees. On Jan. 15, 2004, Davis admitted to investigators, "I did fall on the inmates on purpose and not on purpose. I was very upset at the inmates for wanting to kill some of my fellow soldiers." At one point, Sivits said he remembered Graner saying, "Damn that hurt," after punching a detainee.

Two detainees later gave statements to the Army's criminal investigators, describing their experience that night. One detainee told investigators on Jan. 20, 2004, that the guards were laughing during the abuse. "They forced us to walk like dogs on our hands and knees," he said. "And we had to bark like a dog and if we didn't do that, they start hitting us hard on our face and chest with no mercy."

The detainee replied: "I was trying to kill myself but I didn't have any way of doing it."