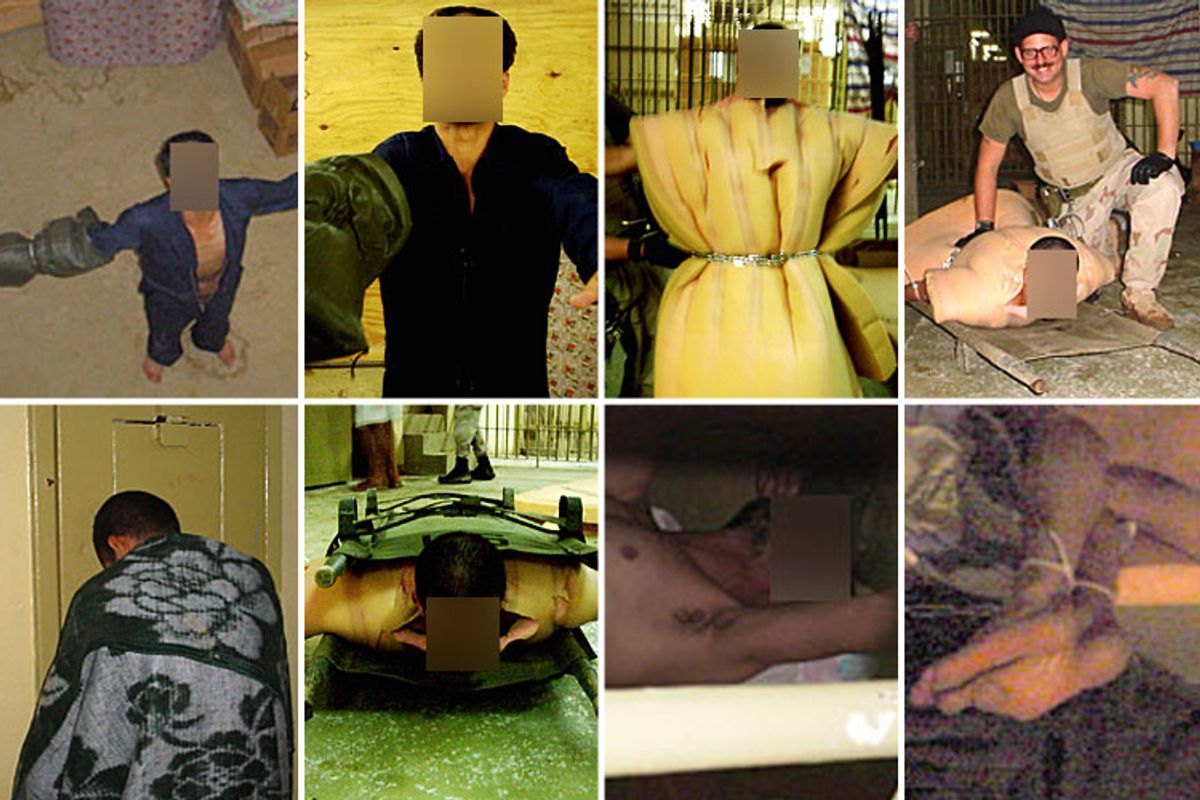 Warning: Photos contain disturbing images of violence, abuse and humiliation. These photos were taken using cameras owned by Cpl. Charles A. Graner Jr., Sgt. Ivan Frederick II and Spc. Sabrina Harman. They depict several incidents of unusual behavior by a single detainee, whom the soldiers described as mentally deranged. The detainee is shown harming himself, and being restrained and otherwise toyed with by guards. In addition to the detainee, the pictures show Graner, Frederick, Sgt. Javal S. Davis and civilian contractor Adel Nakhla.

In addition to "high value" intelligence targets, accused rioters and rapists, the military police at Abu Ghraib had to manage some mentally disturbed inmates, who had no apparent ties to any national security concern. The most prominent of these was a detainee named M-----, who was referred to by U.S. prison personnel as "Shitboy." Over the course of five weeks, he was photographed dozens of times in various humiliating and self-destructive situations. At several points, soldiers chose simply to take photographs and video of M----- harming himself, instead of stepping in to stop him. When the detainee was in restraints, Graner posed for photographs alongside him like a big-game hunter displaying a catch.

A July 2004 report by the Army's Criminal Investigation Command (CID) concluded that the horrors depicted in these photos did not involve criminal acts by guards. This includes incidents in which the detainee sodomized himself with a banana, covered himself with his own feces, and banged his head repeatedly against a steel door until his head was bloody. At several points, military police claimed they put this detainee in restraints allegedly to "prevent the detainee from sodomizing himself and assaulting himself and others with his bodily fluids," found a report by Maj. Gen. George R. Fay.

Nonetheless, Army investigators say these photographs show clear evidence of abuse. "A detainee with a known mental condition should not have been provided the banana or photographed," the Fay report concluded. Military investigators did not further address the legal or moral consequences of U.S. soldiers' allowing a debilitated prisoner in their custody to cause himself serious physical harm.

In his April 2005 statement to the CID, Graner describes several efforts by military police to control this detainee. At one point, Graner said he even injected M----- and another mentally deranged detainee with Benadryl to calm them down: "All our nut cases, we were just feeding them Benadryl because we had the psychotropic medications, but nobody would issue [them], which would have made life a lot easier for us."

Graner said he believed that military intelligence had a psychiatrist at Abu Ghraib. But, Graner added, "he couldn't help us out."