279 photographs and 19 videos from the Army's internal investigation record a harrowing three months of detainee abuse inside the notorious prison -- and make clear that many of those responsible have yet to be held accountable. 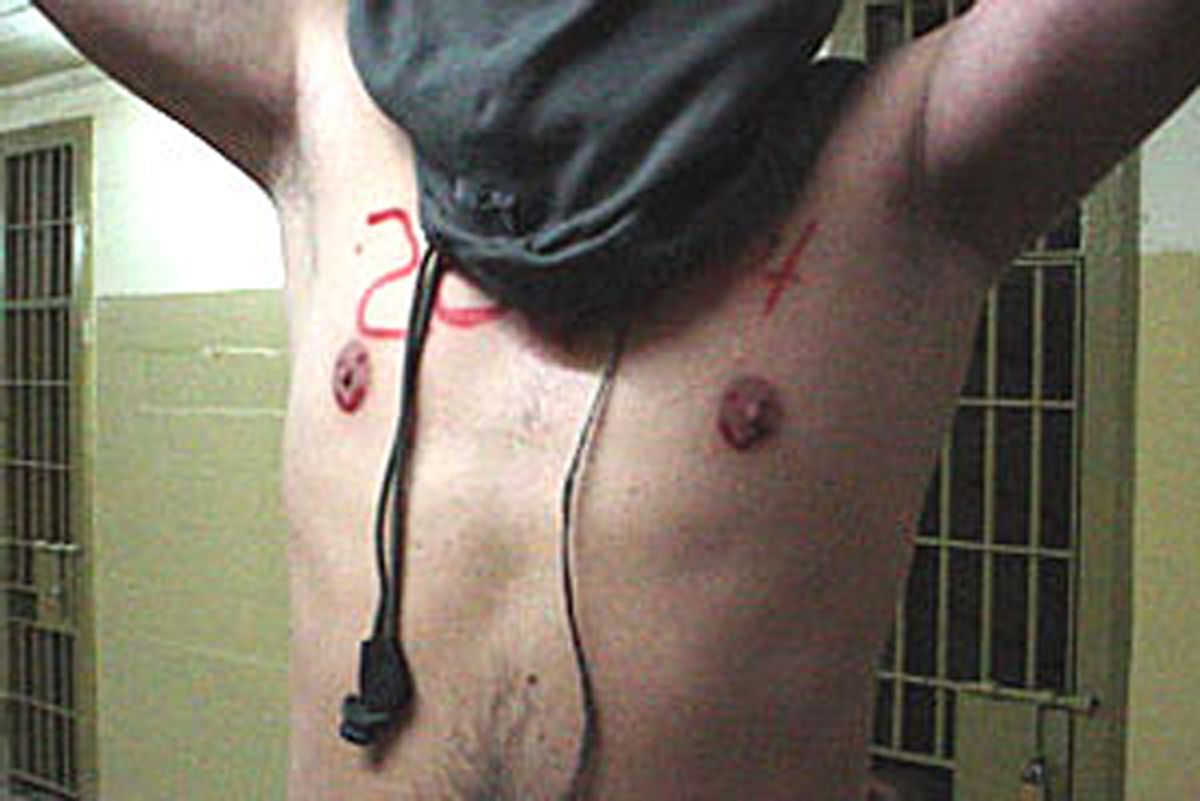 The human rights scandal now known as "Abu Ghraib" began its journey toward exposure on Jan. 13, 2004, when Spc. Joseph Darby handed over horrific images of detainee abuse to the Army's Criminal Investigation Command (CID). The next day, the Army launched a criminal investigation. Three and a half months later, CBS News and the New Yorker published photos and stories that introduced the world to devastating scenes of torture and suffering inside the decrepit prison in Iraq.

Today Salon presents an archive of 279 photos and 19 videos of Abu Ghraib abuse first gathered by the CID, along with information drawn from the CID's own timeline of the events depicted. As we reported Feb. 16, Salon's Mark Benjamin recently acquired extensive documentation of the CID investigation -- including this photo archive and timeline -- from a military source who spent time at Abu Ghraib and who is familiar with the Army probe.

Although the world is now sadly familiar with images of naked, hooded prisoners in scenes of horrifying humiliation and abuse, this is the first time that the full dossier of the Army's own photographic evidence of the scandal has been made public. Most of the photos have already been seen, but the Army's own analysis of the story behind the photos has never been fully told. It is a shocking, night-by-night record of three months inside Abu Ghraib's notorious cellblock 1A, and it tells the story, in more graphic detail than ever before, of the rampant abuse of prisoners there. The annotated archive also includes new details about the role of the CIA, military intelligence and the CID itself in abuse captured by cameras in the fall of 2003.

The Bush administration, which recently announced plans to shut the notorious prison and transfer detainees to other sites in Iraq, would like the world to believe that it has dealt with the abuse, and that it's time to move on. But questions about what took place there, and who was responsible, won't end with Abu Ghraib's closure.

In fact, after two years of relative silence, there's suddenly new interest in asking questions. A CID spokesman recently told Salon that the agency has reopened its investigation into Abu Ghraib "to pursue some additional information" after having called the case closed in October 2005. Just this week, one of two prison dog handlers accused of torturing detainees by threatening them with dogs went on trial in Fort Meade, Md. Lawyers for Army Sgt. Michael J. Smith argue that he was only implementing dog-use policies approved by his superiors, and Col. Thomas M. Pappas, the former commander of military intelligence at Abu Ghraib, was granted immunity from prosecution in exchange for his testimony at Smith's trial.

Meanwhile, as Salon reported last week, the Army blocked the retirement of Major Gen. Geoffrey Miller, the former Guantánamo interrogation commander who allegedly brought tougher intelligence tactics to Abu Ghraib, after two senators requested that he be kept on active duty so that he could face further questioning for his role in the detainee abuse scandal. Miller refused to testify at the dog-handler trials, invoking the military equivalent of the Fifth Amendment to shield himself from self-incrimination, but Pappas has charged that Miller introduced the use of dogs and other harsh tactics at the prison. Also last week, Salon revealed that U.S. Army Reserve Capt. Christopher R. Brinson is fighting the reprimand he received for his role in the abuse. Brinson, currently an aide to Rep. Mike Rogers, R-Ala., supervised military police Cpl. Charles A. Graner Jr. and some of the other guards who have been convicted in the scandal. Now Brinson joins a growing chorus of Abu Ghraib figures who blame the higher command structure for what happened at the prison.

Against this backdrop of renewed scrutiny, we think the CID photo archive and related materials we present today merit close examination. In "The Abu Ghraib Files," Salon presents an annotated, chronological version of these crucial CID investigative documents -- the most comprehensive public record to date of the military's attempt to analyze the photos from the prison. All 279 photos and 19 videos are reproduced here, along with the original captions created by Army investigators. They have been grouped into chapters that follow the CID's timeline, and each chapter has been narrated with the facts and findings of the Taguba, Schlesinger, Fay-Jones and other Pentagon investigations (see sidebar).

But the documentation in "The Abu Ghraib Files" also draws from materials that have not been released to the public. Among these is the official logbook kept by those military soldiers who committed the bulk of the photographed abuse. Salon has also acquired an April 2005 CID interview with military police Cpl. Charles A. Graner Jr., one of the ringleaders of the abuse. (One hundred seventy-three of the 279 photos in the archive were taken with Graner's Sony FD Mavica camera.) The interview was conducted several months after Graner was court-martialed and sentenced to 10 years in prison. He received a grant of immunity against further prosecution for anything he revealed. The documentation also draws from the unpublished testimony of Brinson to the CIA's Office of Inspector General about the death of a prisoner at the hands of the CIA.

Thanks in part to that additional sourcing, "The Abu Ghraib Files" sheds new light on the 3-year-old prison abuse scandal. While many of the 279 photos have been previously released, until this point no one has been able to authenticate this number of images from the prison, or to provide the Army's own documentation of what they reveal. This is the Army's forensic report of what happened at the prison: dates, times, places, cameras and, in some though not all cases, identities of the detainees and soldiers involved in the abuse. (Salon has chosen to withhold detainee identities not previously known to the public, and to obscure their faces in photographs, to protect the victims' privacy.)

Some of the noteworthy revelations include:

Three years and at least six Pentagon investigations later, we now know that many share the blame for the outrages that took place at Abu Ghraib in the fall of 2003. The abuse took place against the backdrop of rising chaos in Iraq. In those months the U.S. military faced a raging insurgency for which it hadn't planned. As mortar attacks rained down on the overcrowded prison -- at one point there were only 450 guards for 7,000 prisoners -- its command structure broke down. At the same time, the pressure from the Pentagon and the White House for "actionable intelligence" was intense, and harsh interrogation techniques were approved to obtain it. Bush administration lawyers, including Alberto Gonzales and John Yoo, had already created a radical post-9/11 legal framework that disregarded the Geneva Conventions and other international laws governing the humane treatment of prisoners in the "war on terror." Intelligence agencies such as the CIA were apparently given the green light to operate by their own set of secret rules.

But while the Pentagon's own probes have acknowledged that military commanders, civilian contractors, the CIA and government policymakers all bear some responsibility for the abuses, to date only nine enlisted soldiers have been prosecuted for their crimes at Abu Ghraib (see sidebar). An additional four soldiers and eight officers, including Brinson, Pappas and Army Reserve Brig. Gen. Janis Karpinski, who was in charge of military police at Abu Ghraib, have been reprimanded. (Pappas and Karpinski were also relieved of their posts.) To date no high-level U.S. officials have been brought to justice in a court of law for what went on at Abu Ghraib.

Our purpose for presenting this large catalog of images remains much the same as it was four weeks ago when we first published a much smaller number of Abu Ghraib photos that had not previously appeared in the media. As Walter Shapiro wrote, Abu Ghraib symbolizes "the failure of a democratic society to investigate well-documented abuses by its soldiers." The documentary record of the abuse has come out in the media in a piecemeal fashion, often lacking context or description. Meanwhile, our representatives in Washington have allowed the facts about what occurred to fester in Pentagon reports without acting on their disturbing conclusions. We believe this extensive, if deeply disturbing, CID archive of photographic evidence belongs in the public record as documentation toward further investigation and accountability.

While we want readers to understand what it is we're presenting, we also want to make clear its limitations. The 279-photo CID timeline and other material obtained by Salon do not include the agency's conclusions about the evidence it gathered. The captions, which Salon has chosen to reproduce almost verbatim (see methodology), contain a significant number of missing names of soldiers and detainees, misspellings and other minor discrepancies; we don't know if the CID addressed these issues in other drafts or documents. Also, the CID materials contain two different forensic reports. The first, completed June 6, 2004, in Tikrit, Iraq, analyzed a seized laptop computer and eight CDs and found 1,325 images and 93 videos of "suspected detainee abuse." The second report, completed a month later in Fort Belvoir, Va., analyzed 12 CDs and found "approximately 280 individual digital photos and 19 digital movies depicting possible detainee abuse." It remains unclear why and how the CID narrowed its set of forensic evidence to the 279 images and 19 videos that we reproduce here.

Although the photos are a disturbing visual account of particular incidents inside Abu Ghraib prison, they should not be viewed as representing the sum total of what occurred. As the Schlesinger report states in its convoluted prose: "We do know that some of the egregious abuses at Abu Ghraib which were not photographed did occur during interrogation sessions and that abuses during interrogation sessions occurred elsewhere." Also, the documentation doesn't include many details about the detainees who were abused and tortured at Abu Ghraib. While the International Committee of the Red Cross report from February 2004 cited military intelligence officers as estimating that "between 70 to 90 percent of persons deprived of their liberty in Iraq had been arrested by mistake," much remains unknown about the detainees abused in the "hard site" where the Army housed violent and dangerous detainees and where much of the abuse took place.

Finally, it's critical to recognize that this set of images from Abu Ghraib is only one snapshot of systematic tactics the United States has used in four-plus years of the global war on terror. There have been many allegations of abuse, torture and other practices that violate international law, from holding prisoners without charging them at Guantánamo Bay and other secretive U.S. military bases and prison facilities around the world to the practice of "rendition," or the transporting of detainees to foreign countries whose regimes use torture, to ongoing human rights violations inside detention facilities in Iraq. Abu Ghraib in fall 2003 may have been its own particular hell, but the variations of individual abuse perpetrated appear to be exceptional in only one way: They were photographed and filmed.