Aaron Eckhart, who stars as a tobacco lobbyist in "Thank You for Smoking," discusses playing bad, being good -- and what really happened to that Katie Holmes sex scene. 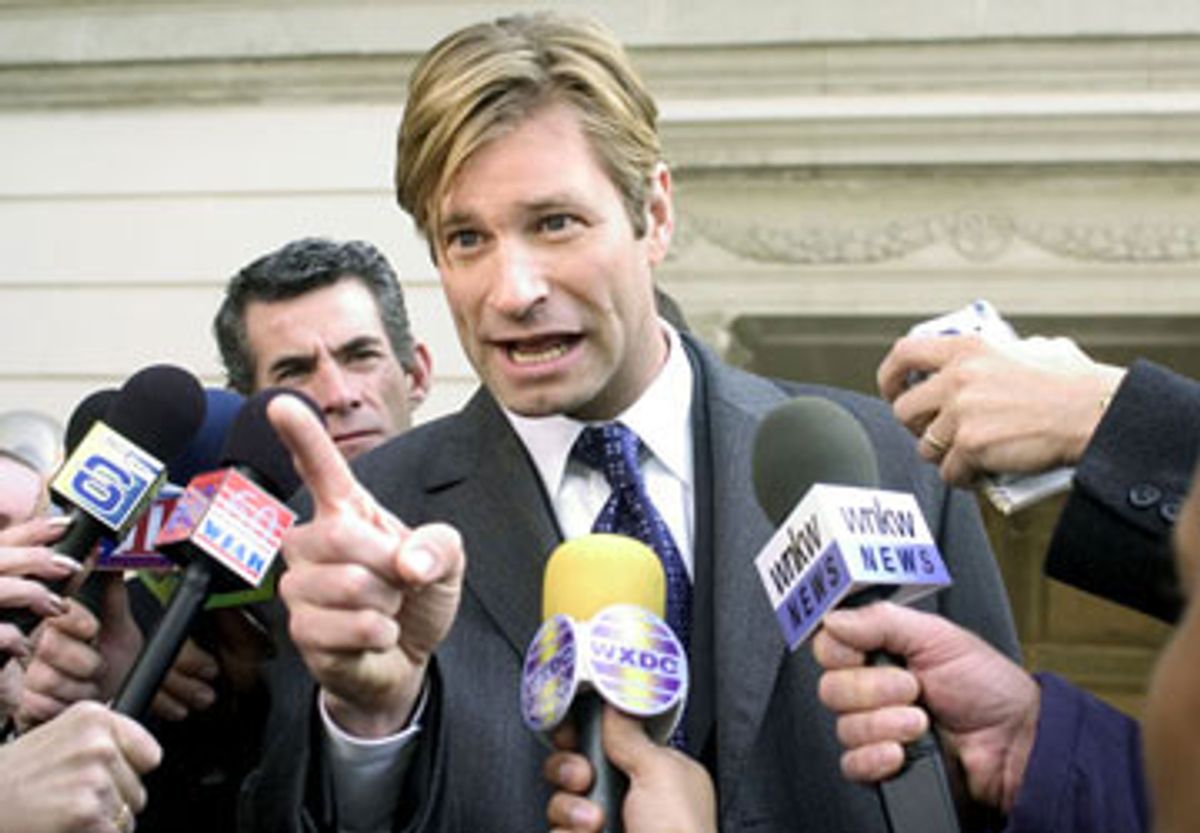 Aaron Eckhart has played a scientist ( "The Core"), a historian ("Possession"), a hippie biker (opposite Julia Roberts in "Erin Brockovich") and a wonderful collection of louts, beginning with his breakout role as the conniving Chad in Neil LaBute's "In the Company of Men." He'll play another in Jason Reitman's "Thank You for Smoking," which is based on the satiric novel by Christopher Buckley and opens in New York and Los Angeles this Friday. In it, Eckhart employs his trademark sly grin and comic-book-hero chin as a butt-kicking, name-taking tobacco lobbyist, Nick Naylor, who charms everyone he meets -- from an eager-beaver reporter played by Katie Holmes to the captain of the tobacco industry played by Robert Duvall.

In the process, the 38-year-old actor seems to have softened his post-9/11 vow to go for more feel-good fare, saying that bad guys are often more interesting to play. But don't ask him to play Satan's right-hand man -- or Hitler, for that matter.

Salon sat down with Eckhart recently in New York.

It seems like it would be really fun to play your character in "Thank You for Smoking": brash and cocky in a good way, but also, as a tobacco lobbyist, doing what a lot of people would consider a very bad thing for a living. Tell me about how you approached the role.

The important thing about this character is that he's always moving forward. I wanted to really get that energy out. So if it looks like I enjoyed doing it -- well, that was part of it. But at any moment the audience can turn on the character because he has all the cards against him: a tobacco lobbyist, you know.

The subject of the film -- the controversy surrounding smoking in America -- is certainly provocative and timely.

Well, smoking has become such a red-hot issue that we all have an opinion on where we stand with it.

They're even considering banning it in bars and restaurants in Britain, where you spent your teenage years.

They're talking about starting it in 2007.

And Ireland as well.

Have you ever been a smoker?

I used to smoke, yeah. I have no feeling for smoking one way or another. If people are happy, I'm happy to let them do it if it's legal. I mean, I wouldn't want them to smoke in front of my face or on a bus or something like that. I guess the whole premise of this film is that, if it's still legal, then there's not much we can do about it.

So it's a matter of the legality.

Well, I mean, who am I to say to the dude who smokes a pack of reds a day that he should give up smoking? It's not my place. If he enjoys it, then he can do it. Now if he's smoking right next to me on a bus, I might say, "Hey, you mind not smoking?" And if there's a sign up there that says "No Smoking," I might say, "Look, you're not supposed to smoke in here." But for me to say, you're a bad person or you're weak because you smoke, I wouldn't say that. Obviously I would like the guy to quit because he's hurting himself. Smoking is bad for you. I don't see this movie as a smoking movie, though. I see it as a comedy about a guy who likes to talk, built around smoking.

Yeah, and that device could be anything. I mean, cellphones, or anything, cheese. At one point they were saying that oranges give you cancer ... And that's the thing about this movie, for me in promoting it: It's a comedy. It's funny. It achieves its goal right there. People will walk out, I think, yes, talking, but I think they'll mostly be chuckling.

I want to ask you about the sex scene that got deleted when the movie was shown at Sundance and the speculation that it had been cut at Tom Cruise's insistence. Also in terms of working with Katie Holmes during the whole TomKat media blitz --

[Laughs.] TomKat! I've never heard that before. [He doesn't seem to be joking.] Well, Katie's wonderful. I had a great time working with her. She could not have been a sweeter girl. The sex scene was apparently [deleted due to] a projection malfunction, unfortunate for the film only in that the audience didn't get to see the whole thing. Surprised everybody. It's funny this whole --

Yeah, it was kind of funny. Now, I haven't seen [Katie] since the movie, and I don't follow the papers, so I don't know where [she and Cruise] are at, what their relationship is going through. I think she's a really great girl, and if she's happy, I'm happy for her.

You often play "bad" characters, like, for example, Chad, in "In the Company of Men."

Well, I think I'm doing the audience a disservice if I look at Chad as a bad guy.

Not in terms of judging him, but does it make you hesitant to take him on as a personality?

Not Chad. But I won't take on certain characters for sure. I would rather not do the "end of the world where Satan is a baby" type thing. For me, that's not interesting.

No, I mean, there's things that I don't want to study. And if you're saying, I have to go research this character and I have to like this character and find reasons for him, and I just can't on the page. Yes, I guess because it's one-dimensional. Chad was not a one-dimensional character, because he had -- and you can question this or not -- true friendship with his friends, he had loyalty to his company. There were things about him that were good. And that's what makes an interesting character. Now, if I'm going to get a movie and I have to play, you know, Satan's right-hand man and go find the kid who's the anti-Christ, to me that's not interesting. I think all the bad guys in history have been multidimensional. Like

I won't quote you on that.

I want that stated, "He didn't say that."

No, I mean in the movies. Like in "Marathon Man."

Noah Cross, the father in "Chinatown."

The father in "Chinatown." The director shows him as a person that has common traits with all of us: He's very meticulous, he likes his things washed, he cares about cleanliness -- all those things.

He has a personality, independent of whether it's good or not.

Yeah, he cares. He loves things. It's important for a bad guy to love things. When we see that, and then we see the bad side, it makes us conflicted. It's like all the Mafia movies. Yeah, he fuckin' gunned down three people in broad daylight, but on the other hand he really loves his daughter. Neil [LaBute, the director] didn't really show that in "In the Company of Men," but in this movie [director] Jason [Reitman] does. He gives us [Naylor's] kid, to ground the film, to give the audience something to empathize with, to relate to the father-son issue.

Have you finished shooting "The Black Dahlia"?

Yeah. It was great! We filmed it in Bulgaria.

Are you a fan of James Ellroy?

Yeah, he's an incredible guy. He is a good writer. As is Christopher Buckley. But Ellroy actually came to the set and after we did one scene, he came up to me and said, "That's exactly how I wrote it."

I read that you made a deliberate choice after 9/11 to take more positive, accessible roles. Are you still on that?

I'm still doing my thing. But yeah, I would like to do movies where people walk out feeling pretty good about themselves. I'd like to do more romantic comedies. It's fun because the audience laughs. It's easier on me, as a person.

Really? So you have hesitation about doing films that a lot of people are uncomfortable with?

Well, it's not really what they care about; it's what I care about. It's what I have fun making. Of course, if a great dark character comes around, I'll play it. It is fun to make people laugh. It's fun to romance a girl through a film. And I want the audience to have a good experience watching a movie.

Ultimately, it is entertainment. Which doesn't mean it shouldn't provoke.

Not at all. But I think movies can sometimes take themselves a little too seriously, and they're limiting their audience. On the other hand, if that's what they want to do, then they can go do it. I mean, look, we all want to have our integrity. You don't want to sacrifice one for the other, and they're not mutually exclusive. But there is something to be said for doing your job well and having fun doing it. And, you know, I haven't always had that attitude. We'll see: I read everything, and some of the movies I want to do after the movie I'm in right now are pretty dark.

Are you working on something else with LaBute?

We're talking about it. We just talked last night about trying to do something. He's got a great new movie coming up I read it, and it's really good, so we'll see what happens. He's awesome.

You guys are friends from college.

Very good friends, did theater together.

You've said that you're "in and out" about your Mormon faith.

Yeah, I don't talk too much about that. Just because that quote right there is not totally right, so I'd rather keep that side of my life private. It's not for public consumption.

OK. Do you prefer stage or screen?

It's like, do you prefer L.A. or New York? I'm not an either/or guy. I'm a both guy. I love Los Angeles and I love New York. I love the theater and I love film. I love to act.

But there most be something about the theater, the adrenaline and the crowd.

There's that, but there's good things about movies, too: the fact that you can do a scene as many times as you want, basically. I'm not one of these guys that says that acting in film and theater are completely different. Acting is acting. You have to be honest, you have to know what you're doing and go out there and do it. Now, theater and film do have different professional constraints. You don't make any money in the theater. And in films you have to go to Godforsaken places and leave your home.

But that seems the fun of it.

Well, let me tell you something, I'm very happy to be in New York. But it is fun, because you get treated really well in distant places. You get to meet people and learn different languages. But it gets lonely. It's like joining the circus. You have to be instant friends with everybody.

You always have to be on.

Exactly. Whereas if you're at home it's not that way.

Are you thinking of settling down somewhere soon?

Yeah, well, I live in Los Angeles. You know, as a kid, I moved around a lot. I didn't like the gypsy life, and now I live as a gypsy. But the thing is, you can't settle down in this business. You can live in one spot, but your heart can't settle down. You're always going to your next job, always thinking about your gig, always having to fly somewhere. And when you settle down you feel like you're missing something, like the whole world is running by you at 200 miles an hour and you're just standing still.