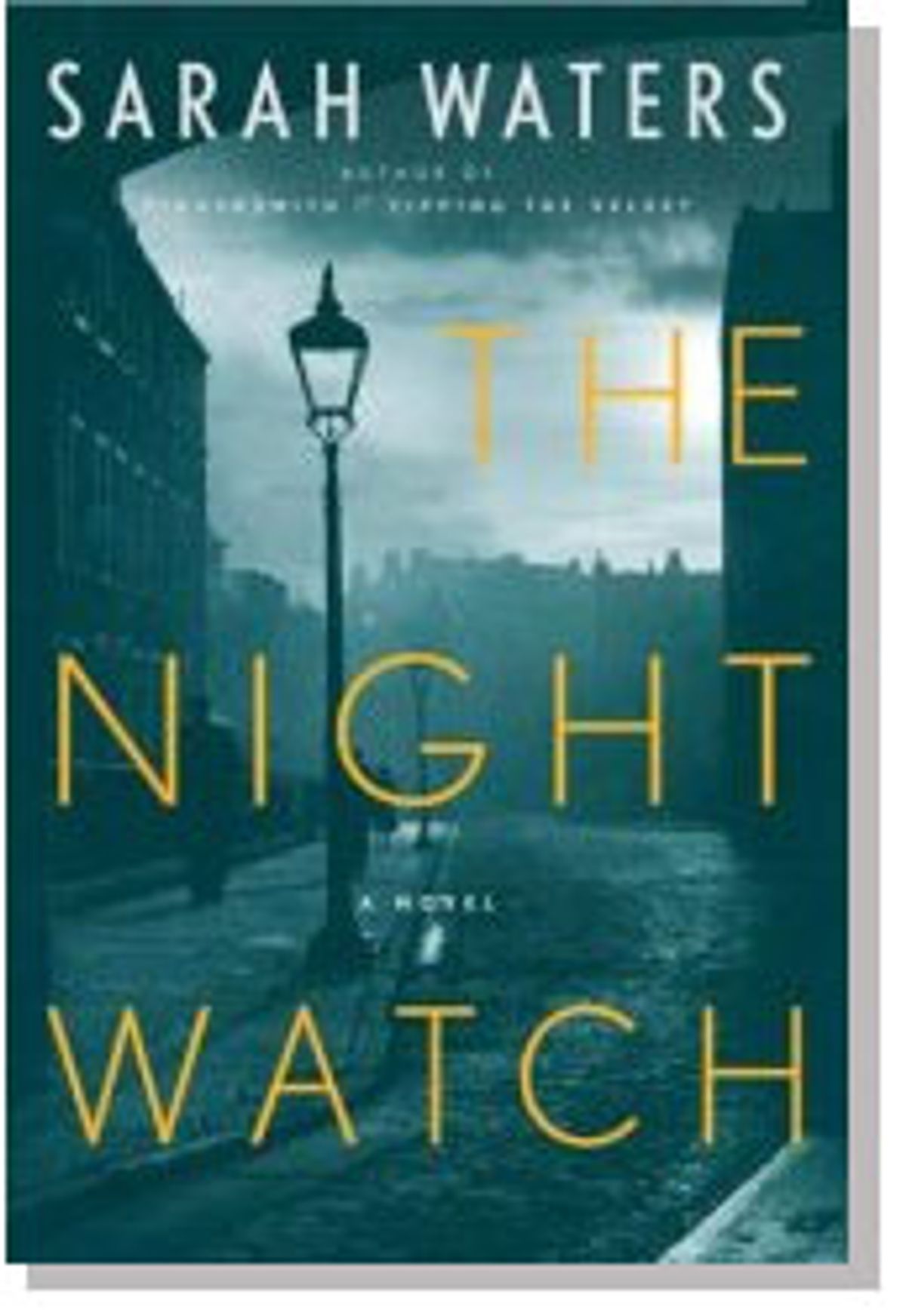 "The Night Watch," Sarah Waters' new novel, is like one of those cinematic melodramas of the late 1940s and early 1950s, directed by Douglas Sirk -- and inspiring Todd Haynes' 2002 homage, "Far From Heaven." (Actually, it's most like the wartime films made by Powell and Pressburger in the U.K., but most Americans aren't familiar with those.) It's big, handsome, somewhat soapy and burnished to a superior gloss. Because they are British, Waters' characters are even more stoic and thwarted by convention than their American counterparts. The novel begins just after World War II and everyone in it is so used to bucking up and being heroic that they can't quite break loose of their stalwart postures.

Waters tells the stories of four Londoners, going backward in time. We first see them rummaging around the wreckage of their lives in 1947, then at the tail end of the war in 1944, and finally in 1941, where we learn about the mistakes, illusions and leaps of faith that lead them to their stunned condition at the book's beginning. The keystone of the story is Kay Langrish, an ambulance driver and medic who works the night watch during the Blitz, saving lives and pulling body parts out of London houses after they've been pulverized by German bombs.

Kay was a hero, as one of the other characters surmises, "one of those women, in other words, who charged about happily during the war, and then got left over." A well-born, impeccably groomed butch lesbian, she is, as a former lover puts it, "such a bloody gentleman. She's more of a gentleman than any real man I ever knew." The other characters, most of whom are touched by Kay's strength in one way or another, include Vivien, a pretty young woman in love with a feckless married man; Vivien's sexually ambiguous brother Duncan, who does a stint in prison for reasons withheld until the book's end; and Helen, another lesbian, more femme, a little weak, fluttery and adrift in her own life.

Waters' previous books have also been historical novels, but set in the 1800s. It may come as a surprise to her fans that she depicts the Victorian era as allowing far more lustiness and adventure than the people in "The Night Watch" enjoy. Her WWII characters are middle-class Britons, not the servants, petty criminals, entertainers and other renegades of "Tipping the Velvet" and "Fingersmith," and as a result, they cling fiercely to their respectability. Whether they're women who love other women or, like Vivien, simply women who love the wrong man, they seem paralyzed between their desires and the conventions that constitute life as they know it.

World War II still haunts and fascinates the British; it was their shining hour and the thing that finally did in the empire. The central mystery of "The Night Watch" is how the war shaped the fates of Waters' characters. Perhaps it gave them the opportunity to be more fully themselves -- Kay could exercise her gallantry on a grander scale; Vivien felt liberated by the fact that "we might all be dead tomorrow. You have to take what you want, don't you? What you really want?" Duncan's adolescent romanticism swung wildly out of control. But Waters' view of the freedom is ambiguous. The novel never entirely busts out of its own conventions, out of melodrama's insistence that true passion must be forbidden and lead to catastrophe. Readers who follow her work will surely find this novel more sober and less piquant than her earlier ones.

Still, "The Night Watch" has an arresting dignity; only people who are truly trapped by circumstances have access to tragedy. And some of the problems here are eternal, such as Helen's obsessive jealousy and her despair that her lover will never grasp "how utterly dreadful it was to have that seething, wizened little gnome-like thing spring up ... how exhausting, to have to tuck it back into your breast when it was done, how frightening, to feel it there, living inside you, waiting its chance to spring again." "The Night Watch" is full of set pieces like this, scenes of keen emotional agony, of Kay's surreal expeditions into the war-maimed city, of Vivien's inability to shake off her doomed infatuation, that are exquisitely pulled off but never ostentatious or precious. There's no camp here, no overstylized Kabuki drama.

The London Kay speeds through in her ambulance after the raids seems transformed: everyday objects like toilets and ironing boards become unrecognizable, stately homes are reduced to piles of rubble, the boundaries between inside and outside are breached, leaving the intimate world of a family kitchen exposed to the street. But there are far more tenacious structures in the world inhabited by Waters' characters -- invisible, implacable ones. What the war did was not demolish those structures, but make it possible for people to glimpse, amid the chaos and the carnage, the possibility of a life without them.