War of the blogs

New books by Instapundit and Kos present dueling visions of the future -- as libertarian paradise or populist battleground. 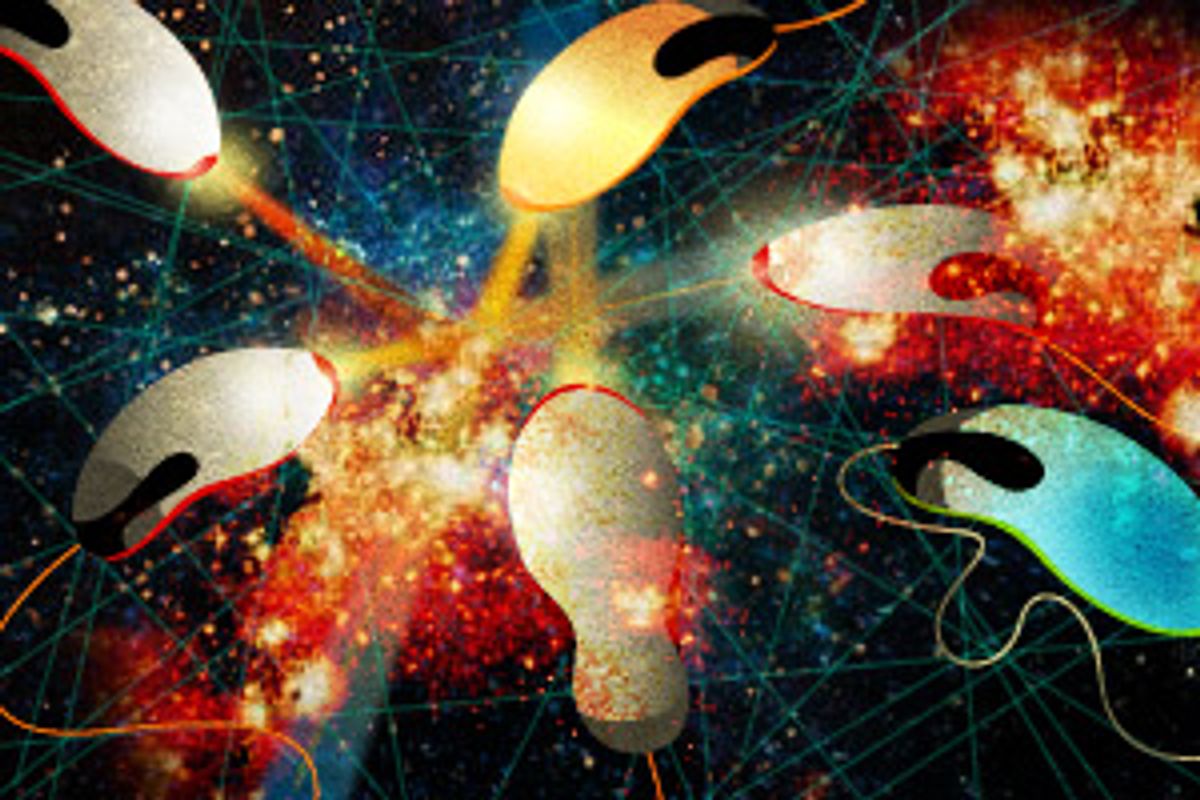 Do bloggers lean left or right? Does the blogosphere have an ideological tilt? Such questions once engaged mainstream reporters and pundits struggling to understand an upstart online movement. During the post-9/11, pre-Iraq explosion of "warbloggers," we were told that blogs gave voice to red-state anger and conservative values. Then, during the heyday of Howard Dean's outsider campaign, we heard that they instead embodied a new progressive populism.

Now, the pointlessness of these questions seems plain. You might as well ask, "Do writers lean left or right?" -- or, "Does the world have an ideological tilt?" As millions of blogs reflect the passions of millions of people, statements that "Bloggers are [blank]" become indicators of ignorance. The only generalizations that have a prayer of holding up are those that zero in on particular blogging subcultures -- discrete continents on the face of the blogosphere, like the realms of open-source software developers or indie-music lovers, foodie bloggers or "mommy" bloggers.

If you look closely, Blogistan Left and Blogistan Right do have distinct tones, behavior patterns and community structures. These differences are on view in two new books by leading bloggers from opposite sides of the political spectrum -- "An Army of Davids," by Glenn Reynolds (Instapundit), and "Crashing the Gate," by Markos Moulitsas Zuniga (founder of Daily Kos) and Jerome Armstrong (of MyDD).

Instapundit launched before 9/11, but it only emerged as a central hub of the conservative blog universe in the wake of the al-Qaida attacks. Reynolds -- a law professor at the University of Tennessee who also dabbles in music, science fiction and a variety of other geekly enthusiasms -- is a classic instance of the species Malcolm Gladwell identified in his best-selling analysis of idea-propagation, "The Tipping Point," as "connectors." Tirelessly posting dozens, sometimes hundreds of brief links and snippets a day, Reynolds helped a new wave of bellicose bloggers find its group identity.

But he did it alone. Instapundit is a sole proprietorship; in that, it is an old-school blog, true to the form's earliest incarnation as a platform for self-publishing, self-expression and self-entertainment. Reynolds doesn't even allow blog visitors to post comments. The blogging "conversation" happens cross-blog, in links that follow the back-and-forth exchanges between the Instapundit site and its peers. This is all in keeping with the libertarian cast of Reynolds' brand of conservatism: The individual is the irreducible atomic force in the libertarian universe.

But there are other ways to blog. Moulitsas was a child of ethnically Greek emigres from El Salvador who spent four years in the Army before landing in Silicon Valley during the dot-com bubble. He started Daily Kos in 2002 at a time when liberals, alarmed at the apparent rightward tilt of the blogosphere (or at least the part of it that was snagging media attention), began streaming onto the Internet in force. He always allowed his readers to add their own comments, and in the heady days of 2003, as the left found its voice in opposition to the Iraq war, he discovered -- just as the Howard Dean campaign was learning -- that the humble "post your comment" field could serve as a potent catalyst for online networking.

In October 2003, Moulitsas switched Daily Kos over to the open-source Scoop software platform, transforming the blog from a soapbox-with-comments to a community hub. In a vivid demonstration of Mitch Kapor's aphorism, "Architecture is politics," the choice of this site-building tool shaped a new set of possibilities for the site -- and accelerated its evolution from solo performance to cast-of-thousands drama.

"An Army of Davids: How Markets and Technology Empower Ordinary People to Beat Big Media, Big Government, and Other Goliaths"

"Crashing the Gate: Netroots, Grassroots, and the Rise of People-Powered Politics"

It's a little too pat to look at this history and say, Aha! Right-wing bloggers are individualists, left-wingers are collectivists. The conservative Web has its venerable communities, and the progressive Web has its comment-free one-man bands. The different approaches to blogging that Reynolds and Moulitsas exemplify reflect not only their ideologies but also their different aims. The Instapundit remains a pundit, an armchair observer of the passing scene, dipping into the roaring flood of blog postings to fish out and chew on choice morsels. By contrast, Kos wants to move the needle of events; he is an activist first and foremost, who discovered that the Web is, as they say in the military, a "force multiplier."

This divergence of goals shapes the two volumes these blog luminaries have produced. Reynolds' book -- the full title is "An Army of Davids: How Markets and Technology Empower Ordinary People to Beat Big Media, Big Government and Other Goliaths" -- is a casual ramble through the landscape of Internet-driven changes in politics and culture. If you've been offline since, say, George W. Bush took office, you might find it a useful refresher; but there isn't a lot new here for readers who have been paying any attention at all to the online world over the last decade.

Reynolds starts off promisingly, with a pungent folksy anecdote comparing blogging and other do-it-yourself media with home brewing. Just as the beer you make yourself is less predictable and has more character than the stale, homogenized mass-market product, he says, bloggers' fizz is tastier than flat Big Media journalism. (I think this casts Salon and similar independent online publishers as microbreweries -- an analogy I'll happily embrace.)

Alas, "An Army of Davids" itself isn't exactly a strong ale. There's a blandness to Reynolds' prognostications about the rise of garage-band home recording, telecommuting and the Starbucks-based office, distributed amateur newsgathering and other phenomena that Reynolds says "empowers individuals." Reynolds sees the rise of the blogosphere as a harbinger of a global shift away from the 20th century's mass market and back to the 18th century's coffeehouse culture.

These changes are inevitable, Reynolds' tone implies, and he will enjoy them, leaning back on the couch at his neighborhood Barnes and Noble, sipping his coffee and posting from his laptop. I'm not suggesting this is an unattractive picture -- I like my espresso, too -- but it doesn't impel you to keep reading Reynolds' prose. In the event that you do, you will find that in the second half of "An Army of Davids" he dons a futurist's hat and wanders down a number of well-trod side roads to survey nanotechnology, life extension, the private exploration of space and the coming "singularity." When the themes about "empowering ordinary people" and "small is the new big" grow faint, Reynolds drags them back into the discussion via unpersuasive last-paragraph summations.

"An Army of Davids" has all the virtues and failings that you'd expect in a blogger's book: You get a personable introduction to the author and his obsessions, but the whole is less than the sum of its parts. "Crashing the Gate: Netroots, Grassroots and the Rise of People-Powered Politics" couldn't be more different: You learn almost nothing about the authors as people, except for one offhand mention that they're both vegetarians. But the book is fueled by an urgent, grab-your lapels hunger for political victory.

It turns out that Armstrong and Moulitsas aren't interested in writing about blogging at all. As their introduction states, "Many people wanted us to write a book about blogging, but that seemed too self-indulgent for our tastes." Instead, they decided to produce a field handbook for insurgent Democrats to seize control, first of their party and eventually of the government.

In broad strokes, "Crashing the Gate" traces a history of the rise of the American right and its subgroupings ("corporate cons," "paleocons," "neocons") and the ossification of the Democratic Party in the face of the right's success. Democrats, the authors maintain, need to stop relying on single-issue supporters and go back to a big-tent coalition that tolerates differences on some controversies in order to achieve the paramount goal of electoral triumph.

The tactics recommended by "Crashing the Gates" are smart; Armstrong and Moulitsas rail at Democrats for their infighting, their policy wonkishness and their reliance on expensive consultants with antiquated playbooks. (They are particularly eager to end the career of Kerry campaign advisor Bob Shrum.)

But the more you read, the more the recommendations in "Crashing the Gate" start to contradict one another. Moulitsas and Armstrong tell Democrats they should stand together and swallow their differences in order to win. They also castigate the old-line party establishment for giving in to the right, and say Democrats should fight Republicans everywhere. Their winning-is-everything pragmatism crosses wires with their "Democratic wing of the Democratic Party" purity. That conflict makes it hard to apply the book's recommendations to everyday political choices.

Take Sen. Russ Feingold's recent proposal to censure the president over his illegal domestic wiretapping: Should we support it because it represents core Democratic principles? Or should we reject it because it could divide the party and give swing-state Republicans a chance to knock Democrats as radicals? Postings at Daily Kos have, predictably, run heavily in favor of Feingold, but the reader of "Crashing the Gate" can't tell where its authors would come down on the issue: fire in the belly, or compromise to win.

I think Armstrong and Moulitsas get into this trouble because they keep dancing around the problematic void at the heart of their argument. "The Democrats' New Deal coalition is long dead," they write. "It's not coming back. Neither will Democrats ever replace the Republicans by trying to move to the center and becoming the part of business interests. Democrats have to stand for something different, providing a stark alternative to the pro-corporatist, antigovernment agenda of the Republican Party ... The Democratic Party stands for everything, yet stands for nothing. It's a gaggle of special and narrow interests, often in conflict with each other, rarely working in concert to advance their common cause."

"An Army of Davids: How Markets and Technology Empower Ordinary People to Beat Big Media, Big Government, and Other Goliaths"

"Crashing the Gate: Netroots, Grassroots, and the Rise of People-Powered Politics"

So what should Democrats stand for? What's the banner under which the disparate elements can unite? That's a complicated question, but in addressing it, "Crashing the Gates" never gets past clearing its throat. There's a lot of repetition of terms like "people-powered" and "progressive." There are love letters to a handful of candidates, like Montana Gov. Brian Schweitzer and former Virginia Gov. Mark Warner (whose presidential campaign Armstrong is now advising). There's talk of Democratic reformation, and cleaning house, and generational change.

But "Hooray for our side" isn't enough to build a political movement. You have to appeal to people's interests and inspire them with a vision of change. Moulitsas and Armstrong know that, but they seem remarkably uninterested in hashing out the details. The only real beef they seem to have with the old-guard Democrats is that they're losers. Ideas? We'll turn the crank on new Democratic think tanks, developed to match the right's successful model, and they'll come pouring out. The content of those proposals? Whatever. "You give us the ideas," they seem to say, "and we'll give you the White House."

And maybe they can, and will. The political savvy in "Crashing the Gate" is considerable. Anyone responsible for building a Web site as popular and loyalty-commanding as Daily Kos is clearly capable of inspiring people -- and organizing them. But for inspiration, I won't reread "Crashing the Gate"; I'll look to what I find on Daily Kos itself -- the continued ferment of ideas and conversation, of quick-hit updates and long-term thinking in post-by-post bursts of anger and triumph and head-scratching.

I'm not sure what gate it is that Moulitsas and Armstrong think they need to crash: With their Web sites, they've already got the keys to the future.