Sinners in the hands of an angry GOP

At a messianic "War on Christians" conference, Tom DeLay warned that "the future of man hangs in the balance" as other righteous souls demanded that gay sex be explicitly described to restore "shame." 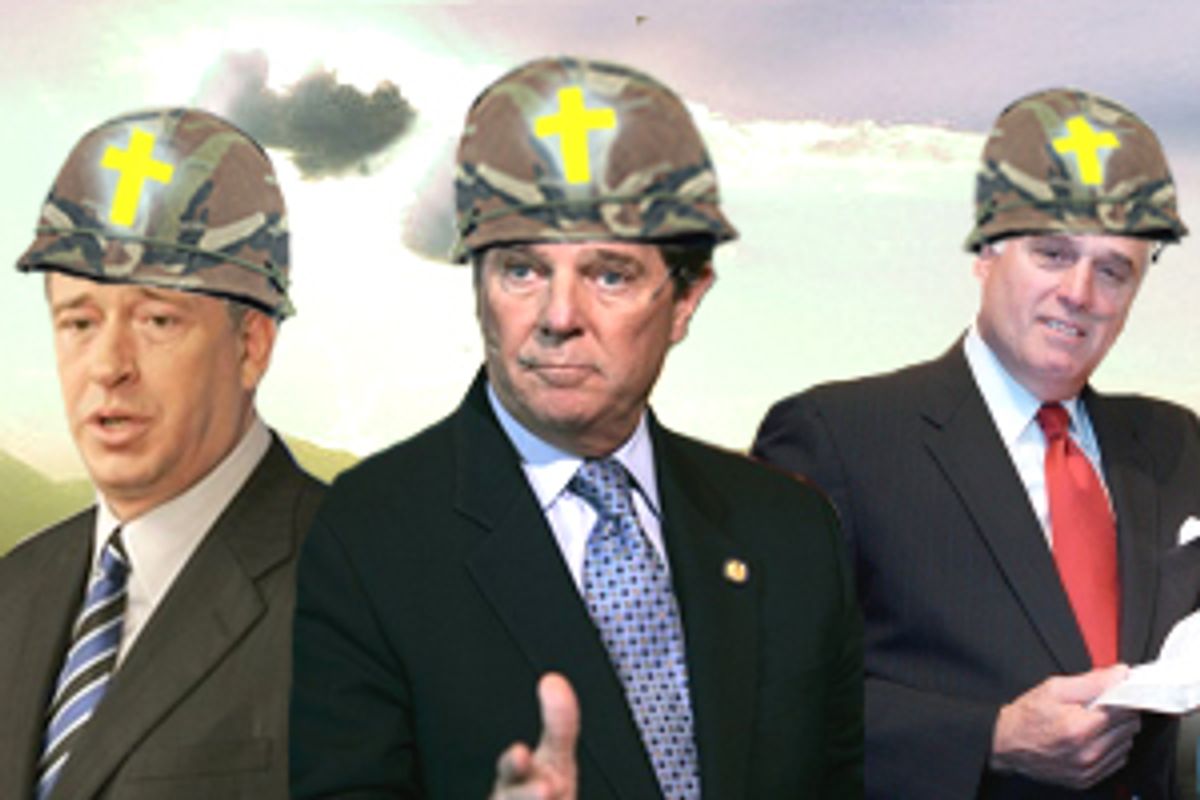 Introducing Rep. Tom DeLay at the War on Christians and the Values Voter in 2006 conference in Washington Tuesday, master of ceremonies Rick Scarborough described him as "the man God has appointed in this last day." The conference began on Monday and was saturated with millennial anxiety. A succession of preachers, talk-radio hosts, religious right operatives and, significantly, major Republican politicians took to the stage at the posh Omni Shoreham hotel to rally the troops for an epic battle between the forces of national renewal and those of vice and enervating perversion. So it wasn't surprising to hear Scarborough, a Baptist preacher who has made it his mission to organize "patriot pastors" for political action, talk about DeLay's legal troubles as part of a culminating war between heaven and hell.

"I believe the most damaging thing Tom DeLay has done in his life is take his faith seriously in the public office, which made him a target of all those who despise the goals of Christ," said Scarborough, a former college football player and longtime DeLay ally. Taking the stage before the 200 or so adoring activists in the banquet hall, DeLay ran with the end-times theme. "We have been chosen to live as Christians at a time when our culture is being poisoned and our world is being threatened, at a time when sides are being chosen and the future of man hangs in the balance," he said. "The enemies of virtue may be on the march, but they have not won, and if we put our trust in Christ, they never will."

A strange mix of dejection and ecstatic expectation pervaded the War on Christians conference. It was organized by Scarborough's group, Vision America, the same outfit that put together last year's Confronting the Judicial War on Faith gathering. At a time when the foot soldiers of the right feel weary and betrayed by the administration they helped put in office, it was meant to rally the base for 2006 by presenting the election in eschatological terms. The energy in the room sometimes felt sluggish, and people were clearly worried about November, forcing their leaders to work all the harder to motivate them for the political crusade.

"Bush has hurt his own troops very badly with what he's done on immigration," Phyllis Schlafly told me in a room outside the hall. "I think he's really destroying his base with his views on bringing in more guest workers." Others complained about Bush's failure to push a constitutional amendment banning gay marriage. People were shocked that the government America midwifed in Afghanistan seemed close to executing Christian convert Abdul Rahman. In the face of lassitude, speakers repeatedly cautioned against giving in to disillusionment and apathy. They reminded the audience that they are one judge away from overturning Roe v. Wade. They warned that Christianity is on the verge of being criminalized in America, and they harped on the manifold dangers of the "homosexual agenda."

Perhaps worrying that anti-gay rhetoric hasn't been sufficiently inflammatory lately, some speakers urged listeners to start using more scatological and stigmatizing language. Peter LaBarbera, who heads the Illinois Family Institute and is known for his obsession with gay men's most outri sexual practices, told the audience, "My greatest frustration has been our side's inability to make homosexual behavior an issue in the public's mind." In order to inspire the kind of revulsion he wants to see more of, he read from a posting on a gay message board: "Hey guys, I know this is kind of gross and all, but I was wondering if I'm the only one. I'm usually the bottom in my relationship with my boyfriend. After having been the receptive partner in anal sex it's only a few hours before I start to experience diarrhea ... it really stinks, because I really like sex, duh, but it takes the fun out of it when I know I'll be tied to the bathroom for the next day."

"I don't think so-called GLBT teens are told anything like this" by their school counselors, LaBarbera said. "We need to find ways to bring shame back to those who are practicing and advocating homosexual behavior."

These issues are nothing new on the religious right, of course -- anti-gay and antiabortion politics have been central to the movement for decades. But the sense of crisis among the speakers was especially acute, and the calls to go on the offensive seemed urgent. Many proclaimed that America's very survival is at stake. Some suggested that if the country doesn't purify itself soon, it might not deserve to survive at all.

Laurence White, a bearded Lutheran pastor in a clerical collar who followed DeLay, repeated a quote that he, like many before him, erroneously ascribed to Alexis DeTocqueville: "America is great because America is good, and if America ever ceases to be good, America will also cease to be great."

"My friends," White said in a stentorian voice like burnished oak, "America is no longer good. Unrighteousness, evil, corruption, perversion and death are now standard operating procedure in the United States of America. If we do not put an end to it now, in this moment of divine destiny, then God will and God should judge America."

This was remarkable language to hear at a political forum. Imagine if Democratic leader Nancy Pelosi gave a conference address that was followed by a furious condemnation of her country. She would have to scramble to distance herself from it and would be excoriated in the press regardless. But it's not unusual to encounter this kind of thing at one of Scarborough's events because they manage to bring together congressmen -- this one featured Sen. John Cornyn and Republican Reps. Todd Akin and Louis Gohmert -- with some of the most radical elements of what was once the right-wing fringe. (Sen. Sam Brownback was supposed to speak as well, but he couldn't make it because he was needed for a vote).

At one point, speaker Herb Titus held up a copy of Kevin Phillips' "American Theocracy," offering it as evidence of the putative war on Christians. It was an audacious move, given that Sara Diamond, the preeminent scholar of the Christian right, reported in a 1998 book that Titus was forced to resign his post as dean of the law school at Pat Robertson's Regent University because he refused to renounce Christian Reconstructionism. Christian Reconstructionism is a theocratic sect that advocates the replacement of civil law with biblical law, including the execution of homosexuals, apostates and women who are unchaste before marriage. Christian Reconstructionists used to be politically radioactive, but a new generation of religious right leaders like Scarborough have embraced them, and some members of today's GOP apparently see no problem associating with them. This does not mean that America is on the verge of theocracy, but it signals an important shift. The language of religious authoritarianism has become at least somewhat politically acceptable.

Consider Rod Parsley, Pentecostal pastor of the World Harvest megachurch in Columbus, Ohio, a broad-shouldered, suntanned man who, like Scarborough, is emerging as one of the new generation of leaders of the religious right. He was a major force behind the mobilization for the anti-gay marriage amendment in Ohio, which in turn helped get out the evangelical vote that put Bush over the top in that state.

Parsley's church is nearly half African-American, and he has a talent for mixing the soaring civil rights rhetoric and rousing call-and-response rhythms of traditional black preachers with classic populist demagoguery and exhortations to ostensibly metaphorical violence. When he speaks and shouts, his words building to alliterative climaxes as his arms wave in the air, sparks seem to fly off him.

"A spiritual invasion is taking place," Parsley roared to the packed banquet hall on Tuesday morning, drawing out the "a" in invasion. "The secular media never likes it when I say this, so let me say it twice. Man your battle stations! Ready your weapons!" He paused to take a preemptive jab at his critics, his voice going soft and scolding: "They say, 'his rhetoric is so inciting.'" Then he nearly screamed, "I came to incite a riot! Man your battle stations! Ready your weapons! Lock and load!"

Parsley preached for a half hour, dabbing at his sweating face with a navy blue handkerchief as his excitement grew. Near the end, he promised, "A great and noble and righteous nation can resurrect itself out of the smoldering ash heap of moral decline that we find ourselves in today."