Bush repeated this bald-faced lie recently. The cowering press still lets him get away with it, but the public is no longer fooled. 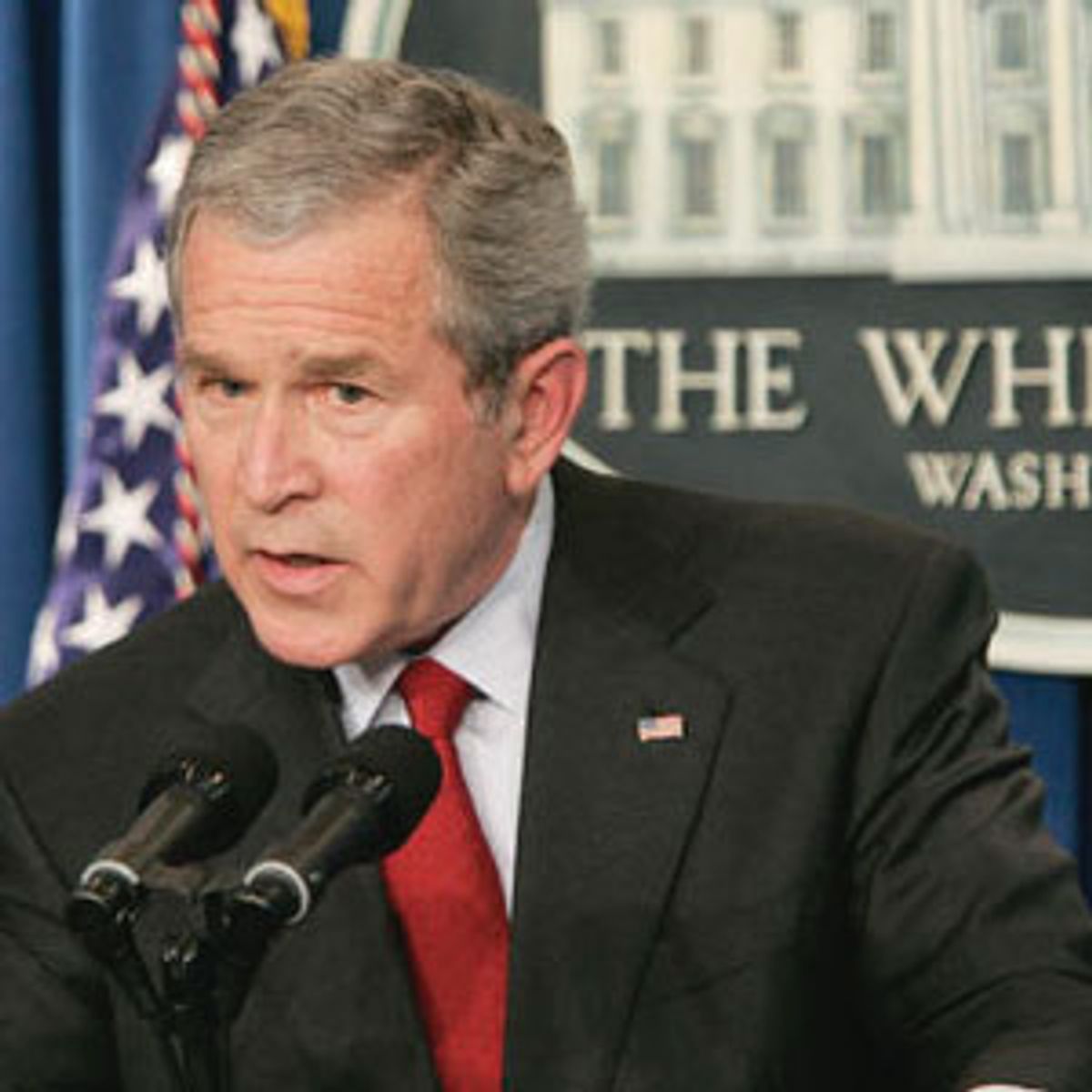 Slowly but inexorably, as more and more information emerges, the conventional wisdom about the events leading to war in Iraq is shifting. The American public has joined the rest of the civilized world in questioning the arguments and motives of the war makers. Commentators who have habitually fashioned excuses for the White House seem to find that task increasingly burdensome and humiliating. The old lies no longer have much traction.

Yet even now, President Bush persists in blatantly falsifying the war's origins -- perhaps because, even now, he still gets away with it.

At his most recent press conference, that strange impulse to utter a ridiculous lie seemed to seize the president. It happened when he called on Hearst columnist Helen Thomas.

Bush responded by denying that he wanted war, a pro forma assertion that nobody believes. He blathered on for a while about Sept. 11, the Taliban, al-Qaida and protecting America from terrorism.

And when Thomas reminded him that she had asked about Iraq, he said, "I also saw a threat in Iraq. I was hoping to solve this problem diplomatically. That's why I went to the [United Nations] Security Council; that's why it was important to pass [Resolution] 1441, which was unanimously passed. And the world said, disarm, disclose, or face serious consequences -- and therefore, we worked with the world, we worked to make sure that Saddam Hussein heard the message of the world. And when he chose to deny inspectors, when he chose not to disclose [emphasis added], then I had the difficult decision to make to remove him. And we did, and the world is safer for it."

The official transcript notes "laughter" at that moment.

What was so funny? Were her colleagues laughing at Thomas, whose monopoly on testicular fortitude has shamed them all for so long? In the days that followed, the bully boys of the right-wing media enthusiastically abused Thomas, which was predictable enough. But have the rest of the reporters in the press room become so accustomed to presidential prevarication that they literally cannot hear a stunning falsehood that is repeated over and over again?

For the third time since the war began three years ago, Bush had falsely claimed that Saddam refused the U.N. weapons inspections mandated by the Security Council. For the third time, he had denied a reality witnessed by the entire world during the four months when those inspectors, under the direction of Hans Blix, traveled Iraq searching fruitlessly for weapons of mass destruction that, as we now know for certain, were not there.

But forget about whether the weapons were there for a moment. The inspectors definitely went to Iraq. They left only because the United States warned them to get out before the bombs started to fall on March 19, 2003. But for some reason the president of the United States keeps saying -- in public and on the record -- that the inspectors weren't there.

Keeping the facts segregated from the myriad falsehoods isn't easy with this regime, so let's review the two previous occasions when Bush made that startling claim.

The first incident was on July 14, 2003, at a White House press conference with U.N. Secretary-General Kofi Annan, who diplomatically declined to contradict him. At that time, the Bush administration was reeling from the impact of former Ambassador Joseph Wilson's Op-Ed essay about the Niger uranium fiasco in the New York Times, which had appeared a few days earlier.

Asked by reporters about the questionable intelligence on Iraq that had distorted his speeches and decisions, the president bristled. He clearly believed such questions impertinent and unimportant. He preferred to talk about the big picture. In his concluding remarks that afternoon, Bush said: "The larger point is, and the fundamental question is, did Saddam Hussein have a weapons program? And the answer is, absolutely. And we gave him a chance to allow the inspectors in, and he wouldn't let them in [emphasis added]. And, therefore, after a reasonable request, we decided to remove him from power, along with other nations, so as to make sure he was not a threat to the United States and our friends and allies in the region. I firmly believe the decisions we made will make America more secure and the world more peaceful."

As the Washington Post noted the following day, "the president's assertion that the war began because Iraq did not admit inspectors appeared to contradict the events leading up to war this spring: Hussein had, in fact, admitted the inspectors and Bush had opposed extending their work because he did not believe them effective." That was putting it rather blandly (as I suggested here). The POTUS had denied reality, and the press corps blinked. The New York Times didn't even report his bizarre statement, and the rest of the media followed along meekly.

(Let me pause here to note how the treatment of these incidents contrasts with that notorious occasion when Bush's predecessor uttered an obvious lie as the cameras rolled. Bill Clinton's denial of his relationship with Monica Lewinsky was played back over and over and over again.)

Perhaps aware that he could put over this nonsense on a lazy and intimidated press corps, Bush did it again six months later. On Jan. 27, 2004, he met briefly with reporters, accompanied by the visiting Polish president, Alexander Kwasniewski. The subject of the absent arsenal came up again because David Kay, the administration's handpicked weapons inspector, had confessed that nine months after the invasion the Iraq Survey Group had found nothing, zip, zero, and that he no longer expected they ever would.

"Don't you owe the American people an explanation?" a reporter asked. "Well, I think the Iraq Survey Group must do its work," Bush replied. "Again, I appreciate David Kay's contribution. I said in the run-up to the war against Iraq that -- first of all, I hoped the international community would take care of him. I was hoping the United Nations would enforce its resolutions, one of many. And then we went to the United Nations, of course, and got an overwhelming resolution -- 1441 -- unanimous resolution, that said to Saddam, you must disclose and destroy your weapons programs, which obviously meant the world felt he had such programs. He chose defiance. It was his choice to make, and he did not let us in" (emphasis added).

Is it necessary to mention that this falsehood again went unnoticed in the mainstream media (although I took exception)? Historians will wonder someday how a free press permitted the world's most important official to say such things without contradiction. Meanwhile we can hope that next time, Jon Stewart will play back the tape on "The Daily Show" while bugging his eyes in disbelief. Then we will be reassured that reality still exists, even when the media and the president prefer to pretend otherwise.