The U.S. is sending diplomats into Iraq, but refusing to give them military protection. No wonder Foreign Service morale is collapsing. 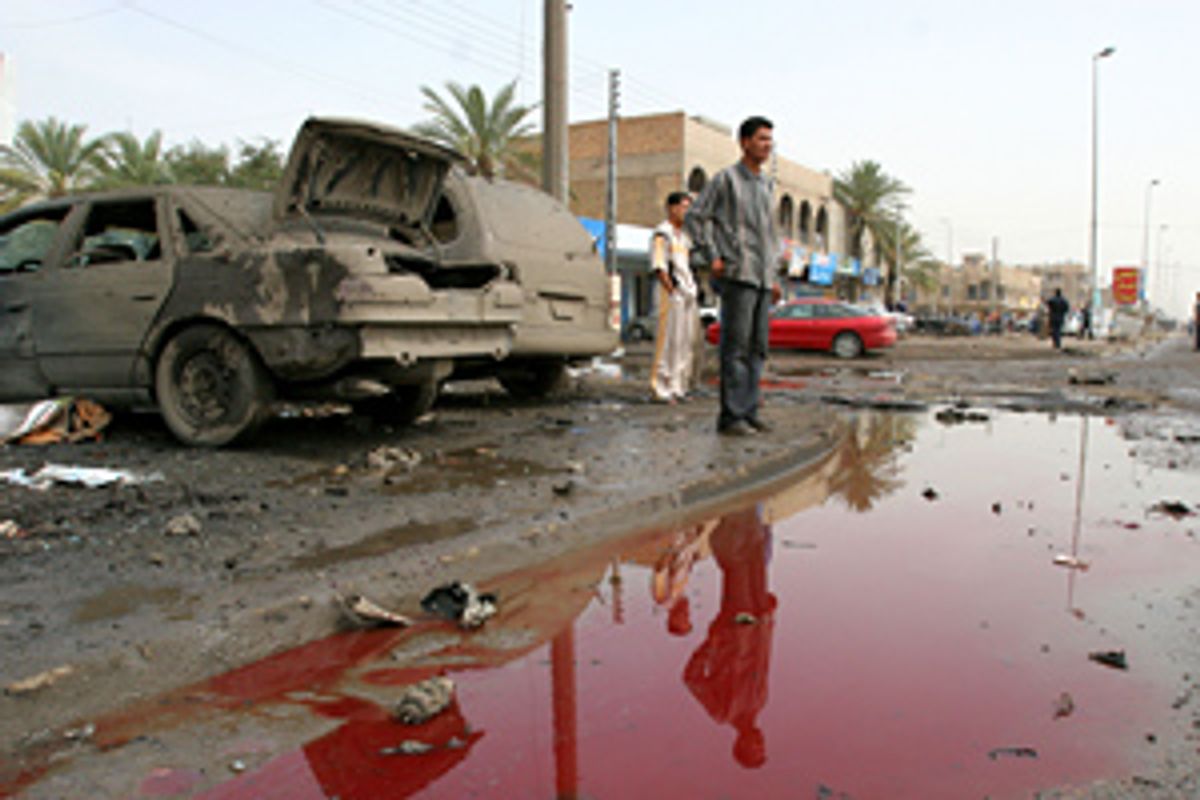 Since the Iraqi elections in January, U.S. Foreign Service officers at the U.S. Embassy in Baghdad have been writing a steady stream of disturbing cables describing drastically worsening conditions, say State Department officials who have seen them. Violence from incipient communal civil war is rapidly rising. Last month, there were eight times as many assassinations committed by Shiite militias as terrorist murders by Sunni insurgents. The insurgency, according to the cables, also continues to mutate. Meanwhile, President Bush's strategy of training the Iraqi police and army to take over from coalition forces -- "When they stand up, we'll stand down" -- is perversely and portentously accelerating the strife. State Department officials in the field report that Shiite militias use training as cover to infiltrate key positions. Thus the strategy to create institutions of order and security is fueling civil war.

Rather than being received as invaluable intelligence, the messages from Foreign Service officers are discarded or, worse, considered signs of disloyalty. Rejecting the facts on the ground apparently requires blaming the messengers. So far two top attachés at the embassy have been reassigned elsewhere for producing factual reports that were too upsetting, according to the State Department officials.

The Bush administration's preferred response to the increasing disintegration in Iraq is to act as if it has a strategy that is succeeding. "More delusion as a solution in the absence of a solution," a senior State Department official told me. Under the pretense that Iraq is being pacified, the U.S. military is partially withdrawing from hostile towns in the countryside and parts of Baghdad. By reducing the numbers of soldiers the administration can claim its policy is working going into the midterm elections. But the jobs that the military will no longer perform are being sloughed off onto State Department "provincial reconstruction teams" led by Foreign Service officers. The stated rationale is that the teams will win Iraqi hearts and minds by organizing civil functions.

The Pentagon has informed the State Department that it will not provide security for these officials and that State should hire mercenaries for protection instead. Apparently, the U.S. military and the U.S. Foreign Service do not represent the same country in this exercise in nation-building. Internal State Department documents listing the PRT jobs, dated March 30, reveal that the vast majority of them remain unfilled. So Foreign Service employees are being forced to take the assignments, in which "they can't do what they are being asked to do," as a senior State Department official told me.

Foreign Service officers as a rule are self-abnegating in serving any administration. The State Department's Intelligence and Research Bureau was correct in its skepticism before the war about Saddam Hussein's possession of weapons of mass destruction, but it was ignored. The State Department was correct in its assessment, contained in the 17-volume "Future of Iraq Project," of the immense effort required for reconstruction after the war, but it was disregarded. Now the State Department reports from Iraq are correct, but their authors are being punished. Foreign Service officers are to be sent out like tethered goats to the killing fields. When these misbegotten projects inevitably fail, as those inside State expect, the department will be blamed. The passive resistance to these assignments by Foreign Service officers reflects informed anticipation of impending disaster, including the likely murders of diplomats.

Amid this internal crisis of credibility, Secretary of State Condoleezza Rice has washed her hands of her department. Her management skills are minimal. She has left coercing people to fill the PRTs to her counselor, Philip Zelikow, who, by doing the dirty work, is trying to keep her reputation clean. Rice's trumpeted "transformational diplomacy" turns out to be a slogan justifying the transfer of U.S. embassy and consular positions principally in Europe to PRT positions in Iraq.

While the State Department was racked by collapsing morale, Rice traveled last week to northern England to visit the childhood home of British Foreign Secretary Jack Straw. After landing at Liverpool's John Lennon Airport, she demonstrated bafflement about some lyrics in "A Day in the Life" ("Four thousand holes in Blackburn, Lancashire"), sang a few bars of "Sgt. Pepper's Lonely Hearts Club Band," and declared that though the Bush administration had committed "tactical errors, thousands of them" in Iraq, it is right in its strategy. Then, after her self-affirming confessional, she and Straw took a magic carpet to Baghdad to attempt to overthrow Prime Minister Ibrahim al-Jafaari in favor of a more pliable character. "I heard the news today, oh boy ... The English army had just won the war."

"Did you ever imagine in your wildest dreams that after Vietnam we'd be doing this again?" one top State Department official remarked to another last week. Inside the department people wonder about the next "strategy" after the hearts-and-minds gambit of sending diplomats unprotected to help secure victory turns into a squalid, overlooked fiasco. "Helicopters on the roof?" asked one official.