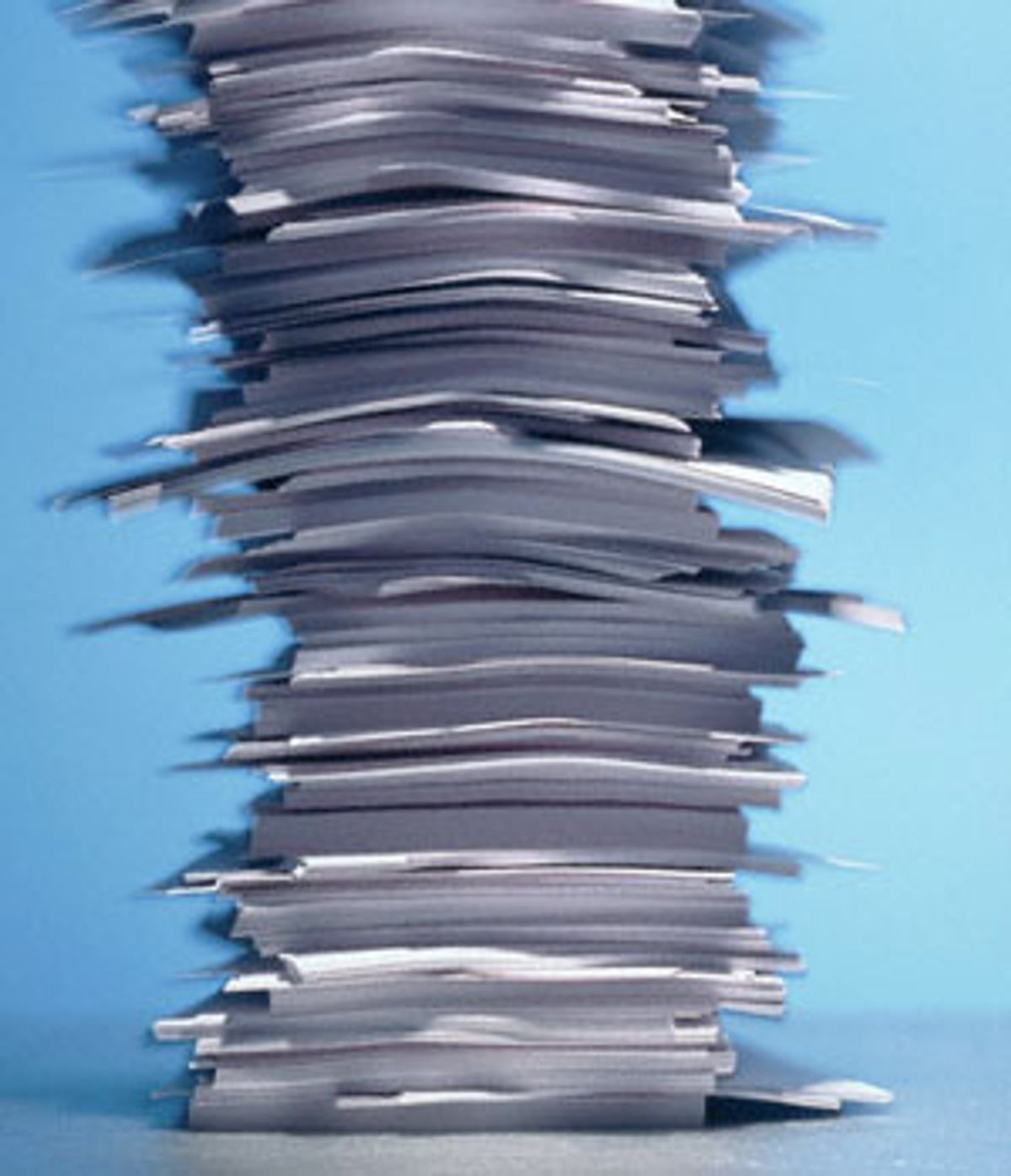 While the world has watched claim after claim about Iraqi weapons of mass destruction dissolve like a mirage, the Bush administration has never deviated from one assertion in its shifting case for war: that there was an operational connection between Saddam Hussein and al-Qaida. As evidence of the manipulation of prewar intelligence keeps surfacing, the administration has now taken that equally dubious claim and made it virtual.

Lacking evidence of a real-world link between Saddam and the perpetrators of 9/11, the Office of the Director of National Intelligence, headed by Bush appointee John Negroponte, has apparently decided to create one in cyberspace -- by seeding its new online Operation Iraqi Freedom Documents archive with suggestive jihadist materials, and by linking the site to an entirely unrelated database of al-Qaida materials.

On March 15, the ODNI began releasing what Republican Rep. Pete Hoekstra, chairman of the House Intelligence Committee, described on his Web site as "millions of pages of documents, recordings and other media captured during Operation Iraqi Freedom, Enduring Freedom and Desert Storm." When he tried to convince the ODNI to declassify the material earlier this year, Hoekstra argued, "There may be many documents that relate to their WMD programs. Those should be released. Same thing with links to terrorism." Once the ODNI had released the material, Secretary of State Condoleezza Rice gave it a nod of approval, telling NBC's Tim Russert on March 26, "We're going to find some important and surprising things in these documents."

The first surprising thing we find in the documents, which are available here through the U.S. Army Foreign Military Studies Office's Joint Reserve Intelligence Center, is that they are not necessarily from, or even about, Iraq. For example, document 2RAD-2004-601189 is described as "Abu-Zubaydah Statement on the Capability of al-Qaidah to Manufacture and Deliver Nuclear Weapons to the U.S." Sounds like smoking-gun material, but what exactly does it have to do with the case for war against Saddam? Zubaydah, a top bin Laden operative who was captured in Pakistan in 2002, told interrogators that al-Qaida could build a "dirty bomb," but he didn't say anything about getting Saddam's help to do it. Moreover, the "statement" itself is nothing more than an Arabic summary of a 2002 CBS News story on Zubaydah's claims. It has no identifiable link to Iraq, other than the odd fact that it appears on a U.S. government site billed as Operation Iraqi Freedom Documents.

The Zubaydah example has plenty of company among the declassified documents, many of which were examined by this Arabic speaker. Interspersed throughout the more than 1,300 documents apparently produced by Saddam's regime are approximately 40 files that are either completely unrelated to Iraq, or that are related only through jihadist elements of the insurgency that began after Saddam's fall.

Some of these are postings to jihadist Web forums about insurgent actions after the fall of Baghdad, including a thread from the Shabakat al-Hisbah forums discussing a precise attack on a "crusader" and National Guard position in Fallujah that was executed by the military wing of Majlis Shura al-Mujahidin. (Document NMEC-2006-617171.) Others are Web publications by al-Qaida's media wing, including a single page from an al-Markaz al-Islami al-I'lami training document discussing atomic explosion tests and types of bursts. (Document NMEC-2006-619612.) Still others are theoretical works by al-Qaida supporters, including a well-known booklet by the Saudi extremist Nasir al-Fahd, "A Response From Nasir al-Fahd to a Question Over the Use of WMD Against Infidels." (Document ISGZ-2004-602491.)

How did these highly suggestive materials end up in the Operation Iraqi Freedom Documents? The site's disclaimer warns that "the US Government has made no determination regarding the authenticity of the documents, validity or factual accuracy of the information contained therein," but it casts no doubt on their provenance or relevance. Beth Marple, deputy press secretary for ODNI, confirmed to Salon that "all documents in the collections were captured in Iraq during Operation Iraqi Freedom." Presumably, the interlopers, most of which are also available for downloading on a variety of jihadist Web sites, could have been captured from Iraqi intelligence departments charged with tracking jihadist activities on the Internet. Or, U.S. forces could have "captured" them by downloading them from locations inside Iraq.

Strikingly, many of the interlopers share some key characteristics: Their origins trace to al-Qaida or other jihadist groups, they frequently involve unconventional weapons -- and they have nothing at all to do with either Saddam's regime or prewar Iraq. Also striking is their inclusion in an archive purportedly dedicated to captured Iraqi documents specifically from the Saddam regime; U.S. forces surely captured a wealth of other materials in Iraq that have nothing to do with the regime and that are not included in the archive. The fact that the only such relics to worm their way into the Operation Iraqi Freedom Documents focus on al-Qaida, the jihadist fringe and unconventional weapons strongly suggests an attempt to reinforce the Bush administration's prewar claim of ties between a WMD-hungry Saddam and al-Qaida terrorists.

Further suspicious linkage lurks at the bottom of each page in the Operation Iraqi Freedom Documents archive, where visitors learn that "Other released documents can be found at http://www.ctc.usma.edu/harmony_docs.asp." This link leads to the Harmony Database at the West Point Combating Terrorism Center, a collection of recently posted al-Qaida documents that have no connection, real or claimed, to Iraq.

Whether intentional or not, the conflation and confusion of materials has been more than sufficient to convince bloggers on the political right that there were, as Bush officials insisted, operational links between Saddam's Iraq and al-Qaida. Midnightbluerant, for example, referenced an al-Qaida document from the Harmony collection (AFGP-2002-001120) and concluded that "captured Iraq documents" tell us how Iraq funded an al-Qaida strong enough to pull off 9/11. American Geek crowed that the Iraqi documents reveal "Saddam did  in fact, have important dealings with al-Qaeda" and lamented that "New York Times, the AP, and their ilk" have not reported such "facts."

Is this what Rep. Hoekstra had in mind when he argued that placing these documents online "unleashes the power of people and the Internet" to help "our understanding of prewar Iraq"?

Despite the suspicious interlopers, the vast majority of the Operation Iraqi Freedom Documents do in fact shed more light on prewar Iraq. Documents detailing the Russian ambassador's efforts to pass information about U.S. war plans to Saddam's regime on the eve of the invasion, Iraqi attempts to deceive weapons inspectors, and furtive if tenuous contacts between Iraq and Osama bin Laden in the early 1990s have all sparked serious and worthwhile discussions. While these debates have rightly ignored the interlopers, they have also publicized the site, drawing visitors who do not read Arabic and who, like the righty bloggers, are likely to assume that Abu Zubaydah's claims about dirty bombs -- summarized on a U.S. government site purportedly about prewar Iraq -- confirm the Bush administration's views of an Iraq-al-Qaida-WMD nexus.

But the 40 interlopers on the Operation Iraq Freedom Documents site are hardly the telltale smoke that points to fire. They look more like a smokescreen, concealing either an egregious error of attribution or a conscious attempt at deception. In this, at least, the new virtual link between Saddam and al-Qaida is of a piece with the Bush administration's earlier claim of a real link. Not because the virtual confirms the original, but because it gives off the same waft of incompetence and duplicity, and raises the same questions of motive and means.

Fritz Umbach is an assistant professor of history at the John Jay College of Criminal Justice at CUNY, and co-director of the September 11 Digital Archive.