The gagging and the glory 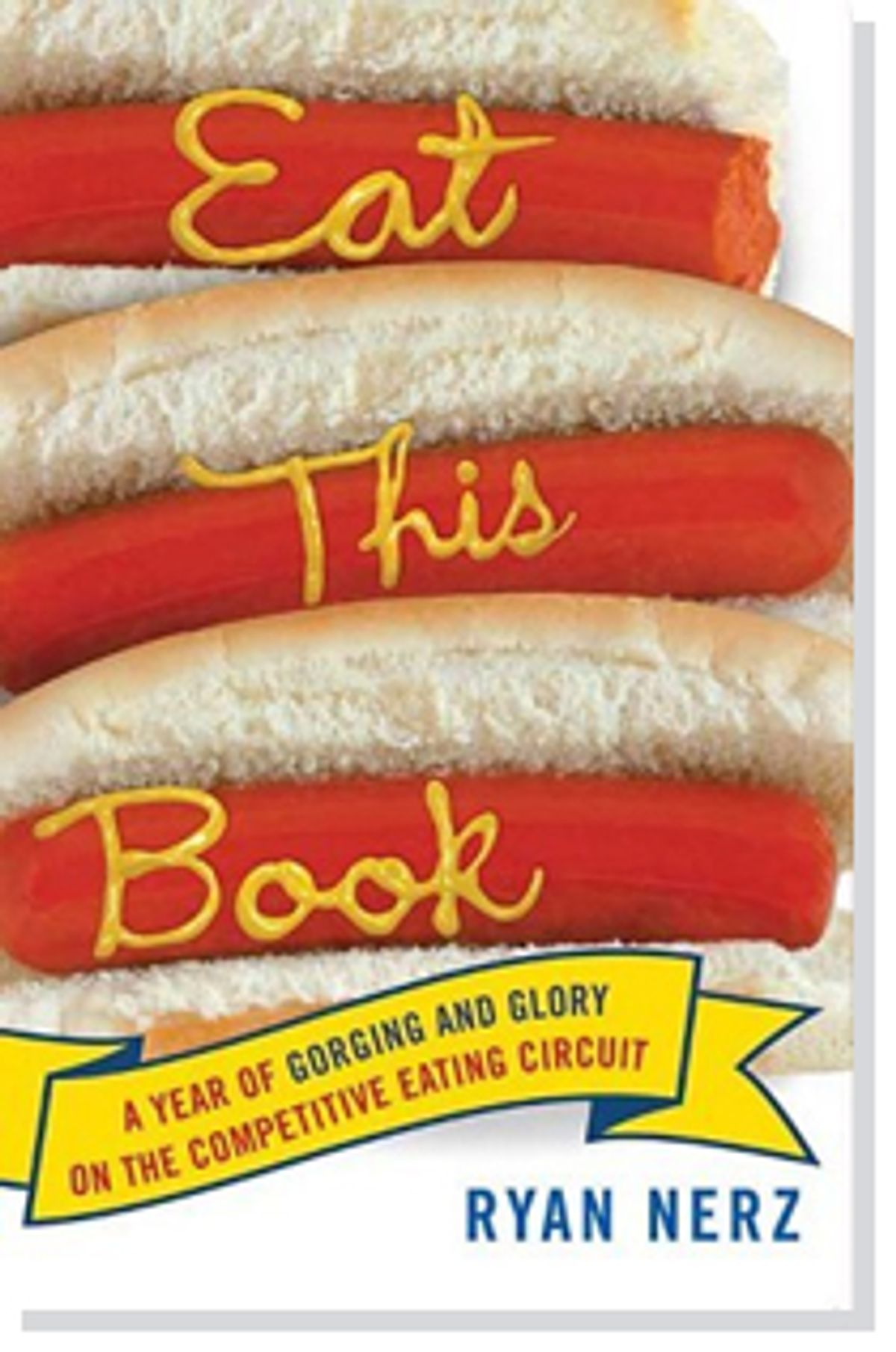 It was while she was working at the Burger King on Andrews Air Force Base in D.C. that Sonya Thomas, an immigrant from South Korea, first got the idea that perhaps her staggering appetite was not an insatiable curse but a gift. Shocking her co-workers, the waifish 38-year-old would throw back 20 chicken nuggets, a Chicken Whopper, three orders of large fries, and a couple of Diet Cokes for her midday meal. It was abundantly clear to anyone who watched Thomas eat that her stomach was made for greatness.

And so at the suggestion of friends, Thomas began to enter competitive eating contests. After an incredible first year -- she was named the International Federation of Competitive Eating's rookie of the year in 2003 -- she continued to break IFOCE records: 8.4 pounds baked beans, 2 minutes, 47 seconds; 161 chicken wings, 12 minutes; 11 pounds Downtown Atlantic Cheesecake, 9 minutes.

Thomas -- aka The Black Widow -- is just one of the dozens of eaters that Ryan Nerz profiles in "Eat This Book: A Year of Gorging and Glory on the Competitive Eating Circuit," an exhaustive, sometimes disgusting, account of his year as an emcee of eating contests. Eaters range from the 100-pound Thomas to the 6-foot-6-inch, 440-pound New York City subway operator and amateur rapper Eric "Badlands" Booker, to 6-foot-8-inch, 406-pound Ed "Cookie" Jarvis, a successful real estate broker from Long Island.

For what is still referred to by most people as a "subculture," competitive eating is garnering an increasing number of salivating fans. ESPN televises the Alka-Seltzer US Open of Competitive Eating, Fox shows the Glutton Bowl, 20,000 people show up each year for Philadelphia's Wing Bowl, and documentaries about professional eaters premiere at art house film festivals. And Nerz does not even have a corner on the competitive eating literary market -- "Horsemen of the Esophagus," by Jason Fagone, was also published this month. With an official league like any other professional sport and a mainstream television market, competitive eating has made impressive strides since the blueberry pie mass vomit scene in "Stand by Me."

Is it absurd to compare eating matzo balls to shooting basketballs? Probably. But sports are about mythologies, and if Japanese eater Takeru Kobayashi's record-breaking feat of 53 and one-quarter hot dogs in 12 minutes is not Jordanesque, then neither is apple pie American.

I recently met with Nerz over lunch at the Cedar Tavern in New York City where we talked about, among other things, overeating, the meat sweats, and how to keep down 13 pounds of watermelon. I had the veggie burger with salad, he the salade niçoise. Our waitress was distressingly thin.

Can you explain the "belt of fat" theory, which I understand is why eaters like Takeru Kobayashi and Sonya Thomas -- skinny people -- win eating competitions?

It is the layer of fat, the adipose tissue that composes a "belly," which actually restricts the ability of the stomach to expand. Basically this theory was put forth not by a scientist, but by a competitive eater named Ed Karachie, a big guy who lived in Queens. He was a hot-dog-eating champ in the mid-'90s who was dethroned by a tiny Japanese guy. That was the first time the Japanese started taking the title away from American eaters.

Some say Karachie's theory is the product of sour grapes -- he was very embarrassed to have been beaten by this little guy, and he was just trying any way to explain what happened to his boys in Queens. But he actually talked to doctors about his theory, and they said that it makes sense. When your belly is expanded to such a great degree, the pressure of fat against it will actually slow you down and restrict you. I talked to some doctors too about the "belt of fat" theory. Some say it makes sense; others aren't convinced.

In general, though, aren't most of the guys on the circuit big, overweight guys?

Yes, that's true. I emcee these contests locally and the guys who come out of the crowd and are good are almost inevitably big guys. But the trend now is toward the big guys trying to lose weight to get better, because of the belt-of-fat theory, which is ironic. Among the eaters in the top 10 now, at least five or six are thin. Sonya Thomas is 100 pounds, Kobayashi is unbelievably fit, buff with a six-pack. Apparently, from talking to doctors, your stomach has a really insane ability to expand. I actually think that because what you're testing in competitive eating is speed, one's talent has less to do with stomach capacity and more to do with esophagus control.

Exactly. There are sphincters in your esophagus from what I understand, one that controls the gag reflex and one that's kind of a cardiac sphincter lower down that controls nausea. The eaters are like sword-swallowers. I mean these are involuntary contractions when we swallow but you can, by using your brain and practice, learn how to control them somewhat. And I think that's really what Kobayashi and Sonya have -- either they have an innate talent or they learn it or both.

OK, after reading the book I am pretty convinced this is a sport. But I feel like throughout the book you tread a line between taking it seriously and then being very tongue-in-cheek, and I was just wondering...

How serious am I?

Yeah, how serious do you take competitive eating? Is the tongue-in-cheek part because you think the audience might want to get some laughs?

Good question. To tell you the truth I'm not sure that I know. When I started, I was totally tongue-in-cheek. I was an American studies major. I thought, OK only in this cultural moment in this society would we make a sport of eating! But then I started to meet the eaters, and you know, guys like Badlands Booker, who's the nicest guy in the world, who has two CDs of competitive-eating-themed hip-hop and is totally not ironic, totally earnest and dead serious. And you just start to absorb that.

Some critics of competitive eating say it symbolizes overconsumption in America. But it's really big in Japan too, and there are eaters from around the world, so it seems to have some sort of universal appeal.

I do think it's universal. I've talked to guys from all over who have eating bets -- where they put in money and say how many McDonald's hamburgers can Ronnie put down for lunch in 10 minutes? Guys are always saying, "How much can you eat, man? How much can you drink?"

The sport seems to teeter between having "average Joe" appeal and being a freak show. And someone like Kobayashi is clearly superhuman -- I mean on Fox he competed against a bear. So in your interactions with the guys on the circuit, is the sense that it's a more a sport, or a carnival stunt?

As far as the sideshow part of it, it is a very fine line to tread, and I think that part of the major success of IFOCE is that they tread that line between making it funny for the crowd but not making the eaters feel like freaks. And that includes talking about it like it's a sport, putting the records online, which I think is genius.

I've seen people who haven't thought things out as well try to do an eating contest, and it devolves into "Eat! Eat! Eat!" and "Go, fat guy, go!" and that's sad. But at real events it's treated much more professionally. Say what you will about it, freak show or sport, these guys do something that you can't do and they just made $2,500 in 10 minutes.

Can you talk a little about the stress on the body? How dangerous is competitive eating?

I tried to talk to quite a few doctors, and many said they just didn't know -- there's been no funded research on it. But some doctors speculated, and they said, basically, if a guy ate in a dozen 10- to 12-minute contests a year, it would not likely have a huge impact on their overall health. However, if that person was already at risk, say a 400-pound man who is doing 15 contests or a guy who's predisposed to diabetes, then it could be unhealthy.

You talk a lot about vomiting in the book -- or "reversal of fortune" as it's called on the circuit. You've competed in eating events. Have you ever vomited?

I haven't. I'm also a really slow eater. I'm just slow, and I've always been slow. That's why I think I realized that one of the main talents is the esophagus and how you swallow -- being able to swallow large chunks of unchewed food. That's what Kobayashi does that no one else can beat him at. Everyone else has the same stomach capacity, they can all eat huge amounts, but he can finish a hot dog in three bites. That's insane. If you've ever tried to do something like that, it's really uncomfortable, and you think you're going to choke. It's scary. So there's a bravery in that, and I think it probably comes from some innate talent.

Anyway, I think there's probably more vomiting than the competitors admit. I imagine some guys purge after an event. The interesting thing is I don't know if it would be healthier to absorb the food or to vomit it. I mean obviously you don't want all that acid coming up -- we know from bulimics it screws up your teeth and esophagus. Badlands Booker, Kobayashi, the LeFevres -- as a point of pride, they keep it down. But probably some younger guys get rid of it, especially if it's something really oppressive like hot dogs.

What else is really hard to eat and keep down competitively?

From what I understand, hot dogs really are the toughest because there's all that sodium and nitrates and then there's the bun -- most eaters dunk the buns in water because they are easier to swallow.

What are "meat sweats"?

When I first heard the term I thought it was another made-up term on the circuit. But then I heard people talk about it, and I don't know what it is about meat, but in the same way that asparagus emanates through your urine, meat perfuses through the skin. It's the essence of meat coming through you.

Do you think you'll be entering any contests soon?

I've done a couple of burger-eating contests, and for fun I even competed against Kobayashi at one point, which was like playing one-on-one with Michael Jordan. I ate like 13 hamburgers in eight minutes, which is a lot for an amateur, but for competitive eaters it's kind of like, oh cute Ryan. Next time I want to do something ... something easier to swallow than a hamburger or hot dog bun. Something like pudding.

I'm sure competitors get more respect, though, when they eat more challenging foods like hamburgers or hot dogs.

Right. I was making the analogy yesterday that maybe someday people will think of hot dogs like they do baseballs. One of the reasons you don't think of eating as a sport is because with baseball you can see someone like Barry Bonds with his huge biceps. If you could see Kobayashi's internal muscles you would see how he's in good eating shape.