The Bush team served up Scott McClellan's stolid stonewalling as the perfect device to humiliate and demote the media. And reporters played along. 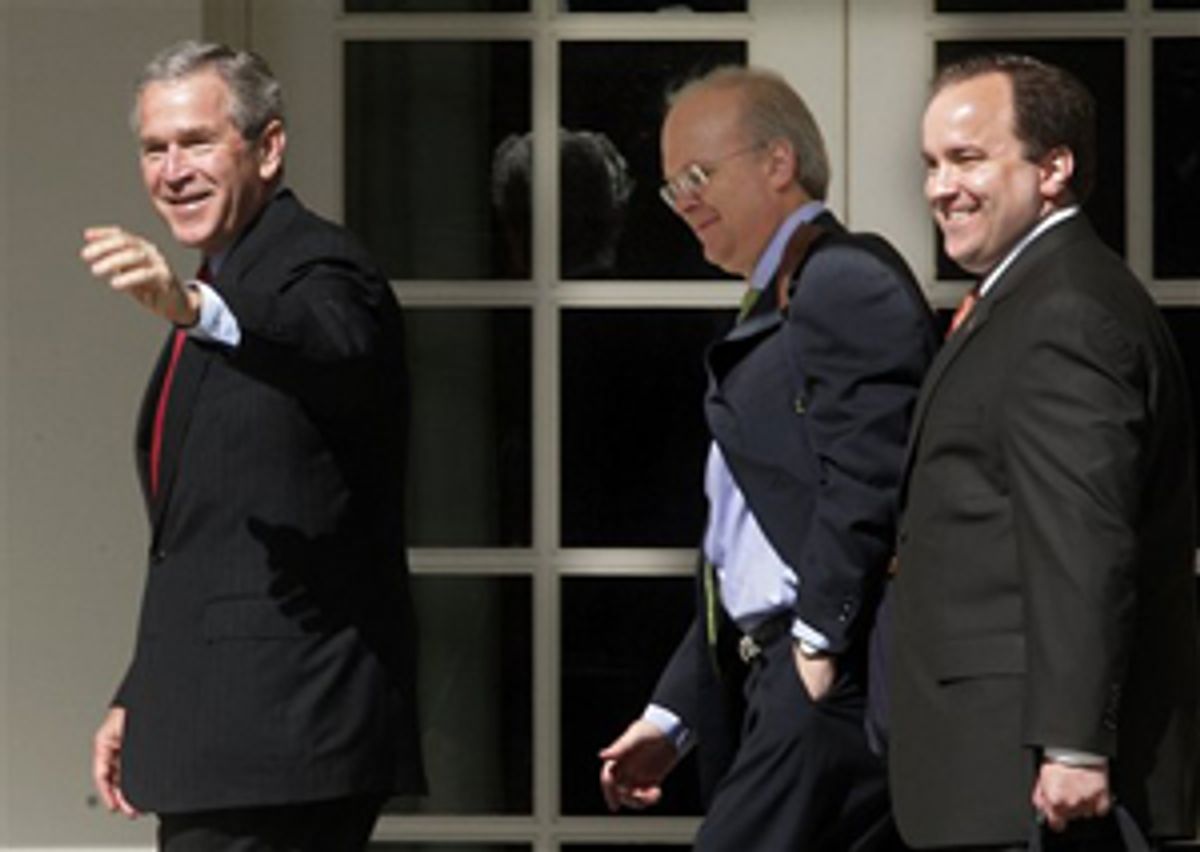 Scott McClellan was a different kind of press secretary, sent to do a different job than the one people had done from that podium before. Instead of grouping him with a succession of other White House spokesmen, a line to which he does not belong, we have to take McClellan's job, call it a piece of the puzzle, and place it alongside other pieces until we recognize the larger political strategy he was a part of.

He's gone; the policy -- strategic noncommunication -- may still be in place.

First, McClellan was a necessary figure in what I have called "rollback" -- the attempt to downgrade the press as a player within the executive branch, to make it less important in running the White House and governing the country. It had once been accepted wisdom that by carefully "feeding the beast" an administration would be rewarded with better coverage in the long run. Rollback, the policy for which McClellan signed on, means not feeding but starving the beast, while reducing its effectiveness as an interlocutor with the president and demonstrating to all that the fourth estate is a joke.

As Nick Madigan of the Baltimore Sun wrote this week, "No matter what the question, the president, his press secretary and other officials usually manage to deliver their position of the day without obstruction." That's part of rollback.

"Back 'em up, starve 'em down, and drive up their negatives" is how I summarized it in my post, Rollback (July 16, 2005). "I believe the ultimate goal is to enhance executive power and maximize the president's freedom of maneuver -- not only in policy-making, and warfare, but on the terrain of fact itself."

And I still believe that. So this is the first thing to understand about McClellan and the job he was given by Bush. He wasn't put there to brief the White House press but to frustrate, and belittle it, and provoke journalists into discrediting themselves on TV. The very premise of a White House "communications" office gets in the way of understanding the strategy that prevailed from July 2003, when McClellan took over from Ari Fleischer, until this week, when he announced his resignation.

McClellan's specialty was noncommunication; what's remarkable about him as a choice for press secretary is that he had no special talent for explaining Bush's policies to the world. In fact, he usually made things less clear by talking about them. We have to assume that this is the way the president wanted it; and if we do assume that it forces us to ask: Why use a bad explainer and a rotten communicator as your spokesman before the entire world? Isn't that just dumb -- and bad politics? Wouldn't it be suicidal in a media-driven age with its 24-hour news cycle?

You would think so, but if the goal is to skate through unquestioned -- because the gaps in your explanations are so large to start with -- then to refuse to explain is a demonstration of raw presidential power. (As in "never apologize, never explain.") So this is another reason McClellan was there. Not to be persuasive, but to refute the assumption that there was anyone the White House needed or wanted to persuade -- least of all the press! Politics demands assent on one hand and attack on the other. (And those are your choices with Bush and Rove: Assent or be attacked.) The very notion of persuasion conceded more to democratic politics than the Bush forces wanted to concede.

The same goes for spin. Anyone who talks about McClellan "spinning" the press has got the wrong idea. The premise of spin is that by artful restatement the facts can be made to look better for the president. But McClellan's speaking style is artless in the extreme. He's terrible at spin, but it didn't detract from the job he was there to do.

While claiming to hate spin, journalists grasp that the very practice of it is an implied credit to their profession; it means they're important! By sticking someone up there who is inept at it, you downgrade the press to unspun: why bother?

McClellan went through the motions of spin sometimes. But he was far more comfortable with robotic repetition of some empty formula he had decided on in advance, like "We are focused on the priorities that the American people care most about and getting things done." His favorite word was "again," as in, "Again, David, the president is focused on ..." That isn't spin. That's running out the clock.

Spinning is improvisational. It requires you to think on your feet. McClellan was terrible at that too: wooden and unconvincing. He was not a phrase-maker, and he had no natural eloquence. Grace under pressure? No, that would concede that the reporters pressing their questions are legitimate actors. And so under pressure McClellan got more excruciatingly thick-headed and often belligerent, provoking belligerence back.

In what sense are these qualifications for the job of press secretary? Well, McClellan was there to make executive power more illegible, which is the way Bush, Dick Cheney (especially Cheney) and Karl Rove want it. Being inarticulate in public is basic to that goal. Bush himself is that way when he's not reading from a script. And as Madigan noted, Bush's "aversion to detailed questions is palpable."

Michael Wolff, in an effective profile of McClellan for Vanity Fair, noticed this. "Because Scott couldn't talk, he wouldn't be able to say anything for himself," Wolff writes. "His lack of verbal acumen, his lack of dexterity with a subordinate clause, becomes another part of the way to control the White House message in a White House obsessed with such control."

As Wolff notes, "He wouldn't be able to cozy up to the press. That requires a serving-two-masters deftness. A special tonal range. A wink. A nod. An emphasis. A surgical use of modifiers, so that I say what I have to say in such a way that we all understand what I mean to say. A little Kabukiness." There has been none of that "tonal range" under McClellan. The results are ugly, but the public ugliness is a clue.

Wolff continues, "McClellan himself, as though having some terrible social disability, has, standing miserably in the press briefing room every day, become a kick-me archetype. He's Piggy in 'Lord of the Flies': a living victim, whose reason for being is, apparently, to shoulder public ridicule and pain (or, come to think of it, he's Squealer from 'Animal Farm'). He's the person nobody would ever choose to be."

Right, the jerk at the podium. Ari Fleischer could stonewall with ease, but he wasn't willing to be that jerk. (Plus, he had a twinkle in his eye when in a tough spot: no good.) And so the full development of rollback and the illegible White House had to wait for McClellan, the true-blue Texan and total Bush loyalist -- considered "family" according to Time's Mike Allen.

Now all this is humiliating for the press to have to endure but here the architects of rollback made a shrewd bet. This is how I explained it to John Harris, political editor of the Washington Post, in our aborted interview on these subjects: "In my view, the White House withdrew from a consensus understanding of how the executive branch had to deal with journalists. It correctly guessed that if it changed the game on you, you wouldn't develop a new game of your own, or be able to react."

And of course they didn't.

The era of news management lasted 40 years -- from 1963, when the networks first began their 30-minute nightly broadcasts, to 2003, when McClellan, Bush, Cheney and Rove proved there are other ways. Replace news management with press nullification. Drop the persuasion model in favor of the politics of assent. Choose noncommunication to demonstrate that you ought not to be questioned. (It only helps our enemies.)

Bush made no secret of his preference for government by assent. That's why he created the Bush "bubble," a remarkable practice in which the White House routinely prevented nonbelievers from attending the president's speeches and asking questions of him in public. (It's now being relaxed somewhat.)

Other parts of the Bush presidency that fit in the puzzle with McClellan's hapless style:

Put it all together and what do we have? In calling recently for Watergate-style Senate hearings on the Bush presidency, Carl Bernstein (also in Vanity Fair) wrote as follows:

"The first fundamental question that needs to be answered by and about the president, the vice president, and their political and national-security aides ... is whether lying, disinformation, misinformation, and manipulation of information have been a basic matter of policy -- used to overwhelm dissent; to hide troublesome truths and inconvenient data from the press, public, and Congress; and to defend the president and his actions when he and they have gone awry or utterly failed."

It's a good question. But I don't think it's fundamental enough. McClellan was a cog in a machine for making the executive power more opaque, and the presidency itself less dialogic. (Fewer questions, no answers unless under subpoena.) We have to understand how this system works and why it has appeared now.

Bush and his staff did something new, I would even say visionary, when they decided to "manage" the news by shutting down those portions of the presidency where the president can be asked the difficult but necessary questions he loathes so much. Scott McClellan, I believe, was sent into the briefing room to shut off that tap even while he stood there and took the beatings.

The intended result: a presidency that is less questioned in the eyes of the world. That's not news management; it's a new balance of power between them and us.

This piece first appeared on Jay Rosen's PressThink blog, from which it is reprinted with permission.

Jay Rosen is chairman of the Journalism Department at New York University and author of "What Are Journalists For?" (1999, Yale University Press). This originally appeared on his weblog, PressThink.