GOP Sen. Mike DeWine is worried enough about Bush's low approval ratings that he blasted Rumsfeld in an interview. Will the Democrats be able to take control of the state that swung the presidency last time? 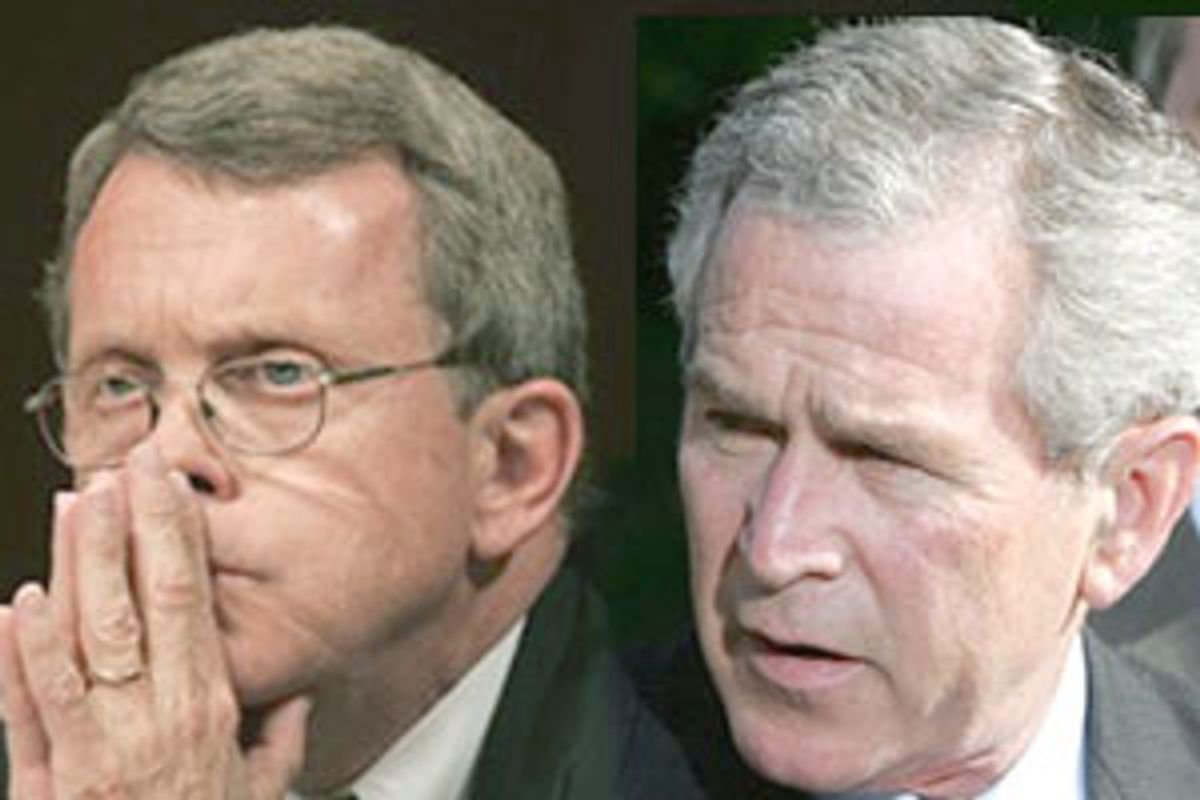 So when I sat down with DeWine last Tuesday in suburban Worthington to talk about his tricky reelection battle against antiwar Democratic Rep. Sherrod Brown, I was not expecting fireworks. But the sky rockets went off as soon as the topic turned to embattled Secretary of Defense Donald Rumsfeld.

"Rumsfeld has made some very serious mistakes," DeWine declared, repeating his verdict for emphasis. "Very serious mistakes. I think history will judge him very harshly." Just to make sure that I was really hearing one of the harshest attacks yet on Rumsfeld by a Republican senator, I asked, "Which mistakes?" DeWine, who has never repented his 2002 vote for the Iraq war, gave me a what-planet-are-you-on look before responding, "Clearly not enough troops going in [to Iraq]. That was the biggest mistake. And a lot of mistakes would be covered under that."

DeWine boasts an independent streak: He endorsed John McCain for president in 2000; he joined with a bipartisan group of Senate centrists to work out a 2005 compromise on judicial filibusters; and, according to the National Journal's 2005 vote rankings, he is the ninth most moderate GOP senator. But the vehemence of DeWine's judgment-of-history indictment of Rumsfeld represents something new -- less a change of outlook than a sense of freedom in expressing it. What his comments symbolize are the lengths to which jittery GOP incumbents will go to distance themselves from George W. Bush.

Ohio Republicans are dealing with two fearsome four-letter words, Bush and (Bob) Taft. The scandal-scarred outgoing governor, Taft bequeaths his party a job-approval rating so low that pollsters may need to resort to negative numbers. During our conversation, DeWine referred to the difficult "climate" so often that I wondered if an iceberg was headed toward central Ohio.

"It is the perception of where the economy is," DeWine said. "It is what happened in the state house in Columbus. It's what happened on national issues. It's not one thing -- where the president is, where the governor is. It's all of these things."

Again in 2006, as in the late lamented presidential race, evenly divided Ohio is poised to take center stage in the red-state, blue-state color wars of contemporary politics. DeWine is one of the most vulnerable Republican Senate incumbents, although the six-months-from-Election-Day conventional wisdom gives him an edge. "I think DeWine will win, but it won't be by a big margin," says Ohio State University political scientist Herb Asher.

If the militantly conservative Ken Blackwell, an African-American, holds on to his current lead over attorney general Jim Petro in the May 2 GOP gubernatorial primary, it will focus national attention on the Republican Party's new strategy of deploying black candidates (football great Lynn Swann has the nomination in Pennsylvania) to win major statehouse races.

Blackwell, the current Ohio secretary of state, is a particular target of national Democratic fury, since he orchestrated the campaign to put an anti-gay-marriage amendment on the 2004 Ohio ballot (helping Bush win the state) and presided over the Election Day chaos that marred the presidential balloting (helping Bush win the state). If Blackwell is nipped at the wire in the primary, it will be because of state economic issues and ethical gaffes (he held stock as secretary of state in Diebold, the voting-machine maker, and in a drug company that markets the morning-after pill, an odd financial position for a fiery foe of abortion).

These two statewide races should be enough to answer the political question, Why-oh, why-oh Ohio? But journalists eager to impress their friends with dramatic accounts of reporting junkets to the Buckeye State also have the excuse that five Ohio House seats are in play. Three are held by incumbent Republicans Deborah Pryce, Steve Chabot and Bob Ney (the legislator most likely to be indicted in the Jack Abramoff scandal). The other two are being vacated by the Democrats who will be atop the statewide ticket in November -- Brown and gubernatorial candidate Ted Strickland.

It is Pryce's race -- in a district (the 15th) which incorporates a wide swath of Columbus (including the Ohio State campus) and affluent suburbs west of the city - that embodies the great imponderable of 2006: Will a political upheaval like the Gingrich revolution of 1994 give the Democrats the 15 seats they need to win back the House? For Pryce, who easily won her seventh term in Congress in 2004 with 60 percent of the vote, is beatable only if past performance does not guarantee future results.

Several factors make Pryce a plausible target for a Democratic upset. As the chair of the House Republican Conference, Pryce is the highest-ranking woman on the GOP leadership team and easily linked, at least in theory, to Tom DeLay. The Census results that produced Pryce's traditionally Republican district are now six years out of date -- and Columbus, as well as the rest of Franklin County, has been trending younger, more affluent and more socially liberal. It is telling that John Kerry ran even with Bush in the 15th District in 2004 and that Franklin County recorded the second-highest vote against the 2004 gay-marriage ban of the state's 88 countries. Pryce's Democratic challenger, Mary Jo Kilroy, is a two-term Franklin County commissioner and a familiar figure in Columbus-area politics.

"What makes this a winnable race is the voters' desire for accountability out of Congress -- especially the congressional leadership," Kilroy said Wednesday afternoon as she sat at an oversize conference table in her Columbus law office. "And [Pryce] has been part of the leadership team with Tom DeLay ... that has been responsible for getting this administration's failed policies enacted into law." As she spoke there was only one giveaway sign that Kilroy was still a fledgling candidate for national office: She clasped her hands tight when my tape recorder was on and then immediately relaxed with her hands flying about as soon as we went off the record.

Many in Ohio politics in both parties look at Pryce's 2004 victory margin, her leadership position and her ability to raise upward of $4 million (more than enough to saturate a district concentrated in one media market) and conclude that Kilroy is lucky that she does not have to give up her day job (her term as county commissioner runs through 2008) to run for Congress.

But some Republicans recognize that the times, or at least the demographics of the 15th District, are a-changin'. As Mark Weaver, one of the top GOP strategists in the state, puts it, "Deb Pryce -- I won't say that she's in trouble. But it's a difficult district, and Kilroy is an aggressive campaigner."

But -- hold the presses! -- we haven't yet heard from Pryce's campaign manager, Jeff La Rue: "They'd do better to connect her with Tom DeLay if Deborah Pryce was an old, fat, balding white guy. Unfortunately for them, she's not." Just for the record, the 54-year-old Pryce is indeed white.

Every time I am asked whether the Democrats will take back the House, I see the frustrated and impatient looks in the eyes of my questioners when I start my dance of yes-but-on-the-other-hand equivocation. But the 15th District illustrates how much is unknowable this far from November. Will Bush be even more unpopular in the district six months from now? Will Kilroy -- who was endorsed Friday by the influential feminist political action committee EMILY's List, but is so far running more than $1 million behind Pryce in the fundraising derby - be able to corral enough cash ($1.5-$2 million) to run a competitive campaign? Will the "culture of corruption" issue slowly fade away with DeLay out of Congress? And, most of all, have the demographics of Pryce's district changed enough to make a Democratic upset possible?

Were it not for the Bush factor, the Democrats would face a daunting task in ending the days of DeWine and roses in the Senate. Sherrod Brown, who has represented economically struggling industrial areas near Cleveland in the House since 1992, sounds the familiar rust-belt theme of the dangers of unchecked globalization. As he put it in a phone interview, "I think trade is a very big issue in this race. I think that voters understand that those job-killing trade agreements do, in fact, hurt their communities." But this emphasis on lost manufacturing jobs (200,000 have left the state, Brown obligingly points out, since Bush took office) may not have magic-bullet appeal in central and southern Ohio, where building cranes rather than abandoned industrial smokestacks dominate the skyline.

Brown may be on firmer political ground reminding voters of the contradictions embedded in DeWine's relationship with the White House. "Mike has spent much of the last year trying to distance himself from George Bush," Brown said. "And when Bush fundraises for him on one hand, he calls himself in his ads 'an independent voice for Ohio.'"

What the Democratic Senate candidate was referring to was DeWine's propensity to be unavailable when Bush zips into the state, aside from a closed-to-the-press fundraiser and a joint appearance at the Cincinnati Reds opening-day baseball game.

During our interview, I asked DeWine whether he intended to campaign with the president. DeWine gave a little laugh and said, "Time will tell. We'll see." And then the senator retreated to his boilerplate formulation that "this campaign is between Mike DeWine and Sherrod Brown." A few minutes later, as we were exchanging farewell handshakes, DeWine said, "It's going to be a fun race." And then the Republican senator, with an engaging penchant for honesty, paused and added two nervous hedge words, "I guess."