An Army report found Maj. Gen. Miller did not lie when he told Congress he held no "direct discussions" with top Pentagon officials -- even though he met with Rumsfeld aide Stephen Cambone after visiting Abu Ghraib. 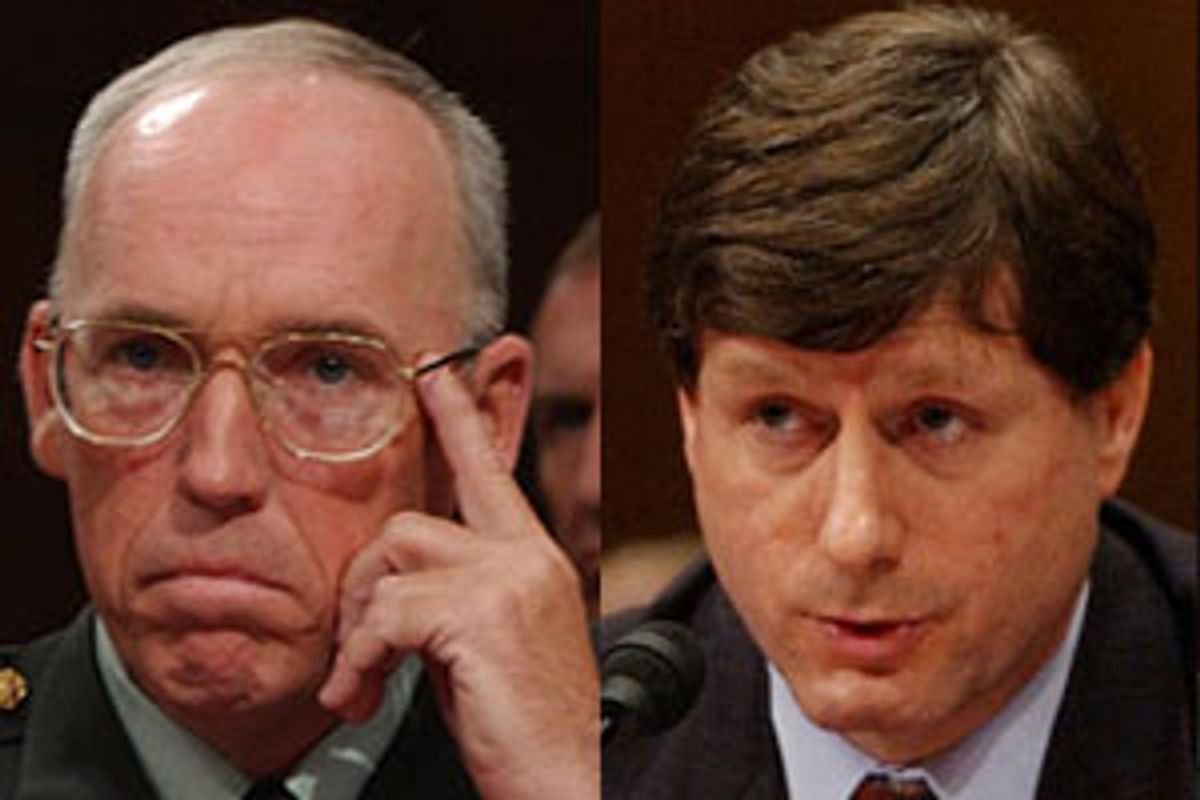 Army investigators have employed a hairsplitting distinction between a small group "briefing" and "direct discussions" to exonerate Maj. Gen. Geoffrey Miller, a central figure in the detainee abuse scandals, of allegations that he lied to Congress.

The Army inspector general has concluded that Miller, who set up detention operations at Abu Ghraib just before the infamous abuse there, did brief a top Pentagon intelligence official about his work at the Iraqi prison. Miller had been accused of lying under oath to Congress in May 2004, when he told the Senate Armed Services Committee that he had "no direct discussions" with Undersecretary of Defense for Intelligence Stephen Cambone. He later admitted to delivering a briefing to five senior Pentagon officials, including Cambone.

In a report obtained by Salon through the Freedom of Information Act, the inspector general found that the two seemingly contradictory statements were both true, a distinction that has a Senate Democrat crying foul.

"Maj. Gen. Miller's apparent position that he did not discuss the subject with Undersecretary Cambone but that he briefed Cambone on the same subject is a distinction without a difference to me," said Sen. Carl Levin, the senior Democrat on the Senate Armed Services Committee.

Miller is a central player in the detainee abuse scandals at Abu Ghraib and at the detention facility at Guantánamo Bay, Cuba, where he was previously the commander. A separate Army investigation found Miller should be admonished in connection with the "degrading and abusive" treatment of so-called 20th hijacker Mohammed al-Kahtani at Guantánamo in late 2002. Miller's superior later rejected that recommendation.

Miller was dispatched by the Pentagon to set up interrogation operations at Abu Ghraib in the late summer of 2003; critics allege he was sent to "Gitmo-ize" the Iraqi prison. His contacts with top Pentagon aides about operations in Guantánamo and Iraq could show whether Bush administration officials are somehow implicated in detainee abuse. "I don't think major generals in the United States Army make up policies about strategic interrogation of detainees unless they've coordinated and communicated to higher headquarters," Rhode Island Democratic Sen. Jack Reed said about Miller's visit to Abu Ghraib during the May 2004 hearings. As Salon reported last week, Secretary of Defense Donald Rumsfeld was in weekly communication with Miller during Kahtani's controversial interrogation at Guantánamo.

Miller was asked during a May 19, 2004, congressional hearing on the Abu Ghraib scandal if he had talked with Cambone or Deputy Undersecretary of Defense for Intelligence Lt. Gen. William G. Boykin after Miller's "assessment" visit to Abu Ghraib. Miller replied that he had submitted a written report about his visit to the U.S. Southern Command in Miami, Fla., but had no discussions with Cambone or Boykin. "I had no direct discussions with Secretary Cambone or General Boykin," Miller said.

But three months later Miller told attorneys a different story. As the Chicago Tribune reported in July 2005, Miller said in a recorded statement, "Following our return in the fall, I gave an outbrief to both Dr. Wolfowitz and Secretary Cambone."

But in addressing the issue of whether Miller misled Congress about this meeting, the inspector general made the nuanced distinction that the Miller briefing, which involved five officials, wasn't the same as "direct discussions" with Cambone. The report concluded that "the preponderance of the evidence established that MG Miller's testimony" to the Senate Armed Services Committee "that he had no direct discussions with Dr. Cambone about the assessment visit was true."

The inspector general report, which was issued in December 2005 and was only recently obtained by Salon, also detailed this briefing, which included Wolfowitz; Cambone; Maj. Gen. Ronald L. Burgess, director of intelligence for the Joint Chiefs of Staff; Wolfowitz's military assistant Maj. Gen. William B. Caldwell IV; and one other person.

Outside legal experts called the inspector general's semantic distinction ridiculous. "It depends on what the meaning of 'is' is," joked Scott Horton, an adjunct law professor at Columbia University and chairman of the international law committee of the New York City Bar Association, in reference to President Clinton's linguistic sophistry about the Lewinsky affair. "It is that level of completely absurd splicing," Horton stated.

Levin, of the Armed Services Committee, recently joined with committee chairman Sen. John Warner, R-Va., to block Miller's retirement after he took the unusual step of invoking his right to avoid self-incrimination in legal proceedings against Abu Ghraib soldiers.

Cambone also testified before Congress during the May 2004 hearings into Abu Ghraib that he had no direct contact with Miller. "I was not briefed by General Miller," he said. In addition, in a partially redacted transcript of an inspector general interview with Cambone attached to the report, the intelligence undersecretary said he remembers almost no discourse with Miller. "I don't even have a firm recollection of that brief," Cambone said. He said there was little reason for much interaction between him and Miller and added that his "memory is very vague" on the briefing or whether he ever had a phone conversation with Miller.

The inspector general report on Miller contains other disclosures that could contradict Miller's account of his limited contact with Cambone. An annex to the inspector general report includes a reference to one unidentified witness who claimed that Miller also met privately with Cambone, Wolfowitz and Burgess in a "very short 5-minute closed door session," that followed Miller's Pentagon briefing on Abu Ghraib. The heavily blacked-out report, however, provides no other details about that alleged session.

The report also said there was "insufficient evidence" to support the testimony of a senior aide to Miller at Guantánamo who recounted a phone call between Miller and Cambone on a secure line. An investigator with the inspector general said the witness remembered that "half-way through the phone conversation the darn connection drops off," and the aide had to try to reach Cambone for Miller again.

Last week, a military judge ordered Miller to appear at next month's court-martial of Sgt. Santos A. Cardona, who is accused of abusing prisoners with a military dog at Abu Ghraib. According to Col. Thomas Pappas, the former head of intelligence at Abu Ghraib, Miller recommended the use of dogs during interrogations -- a claim Miller has denied. If he testifies, Miller would be the highest-ranking officer to appear in an Abu Ghraib-related trial.

Even though semantics seems to have gotten Miller off the hook for his statements to Congress, the larger issue of his role in detainee abuse at Guantánamo and Abu Ghraib remains unresolved.