Out of the shadows

The undocumented and their allies who took to the streets come from a group rarely seen at protests: The working poor. Is this the sound of a new labor movement? 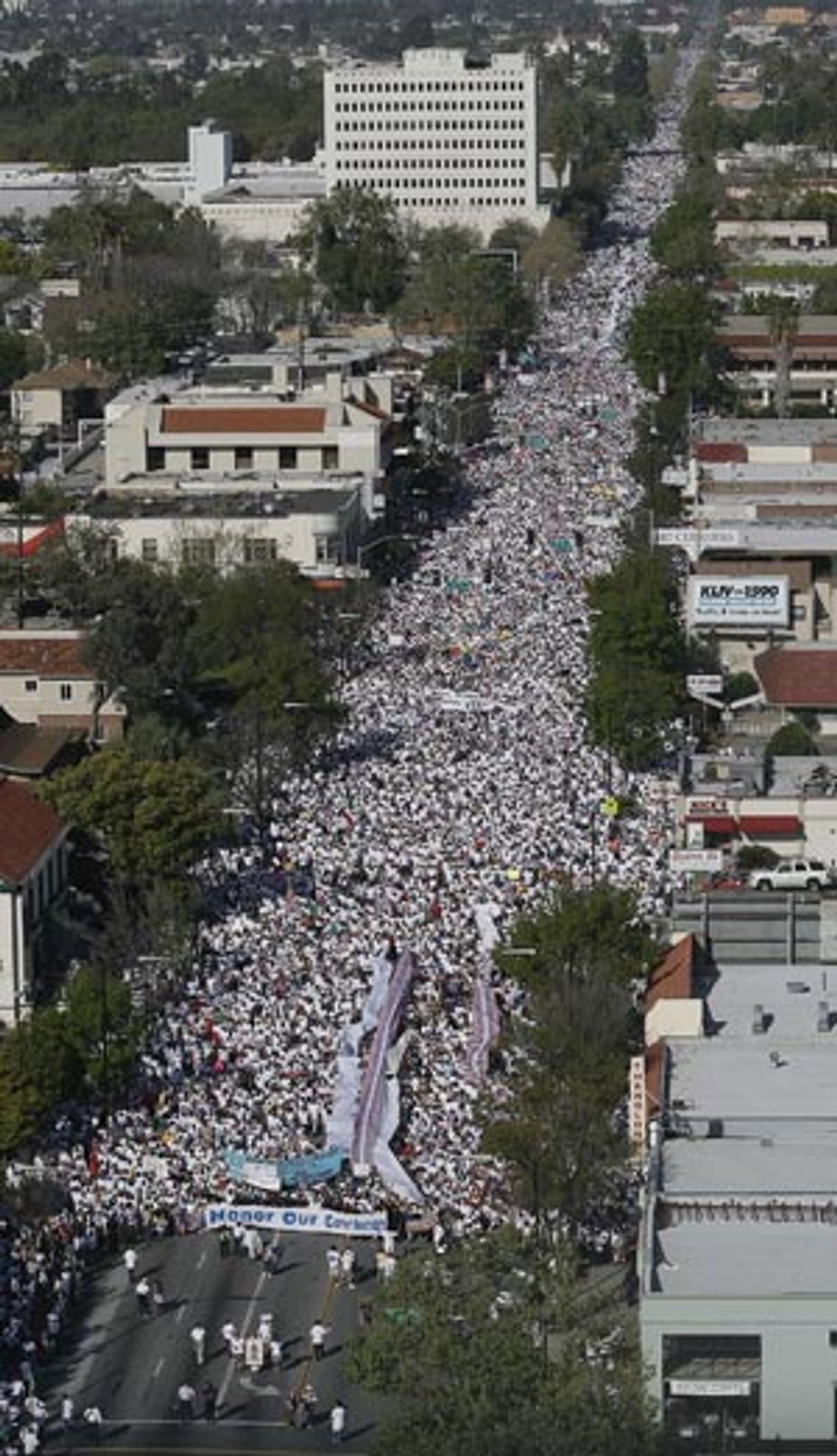 So much for immigrants hiding in the shadows -- everyone's favorite expression for the undocumented, but a ludicrous myth for anyone who has had their eyes open.

For those who haven't -- a large group of elected officials in Washington -- the Day Without Immigrants on Monday, and the demonstrations that preceded it through March, offer proof that it's fairly difficult to hide 12 million men, women and children. There they were wearing white T-shirts, sensible shoes and hope on their sleeves as they marched in big cities like Los Angeles, Chicago and New York and smaller ones like Richmond, Calif., and Las Vegas, Nev.

While conservatives have cowed the Democratic Party into making tepid offers of a path to citizenship for some who have been here for more than five years, the 12 million were ready to make the case for amnesty -- for todos. It's a theme that ran throughout the day and everyone agreed: Sí, se puede. Yes, we can!

If that sounds like churros in the sky, it's useful to remember that only four months ago, many elected officials envisioned a plan to send some or all of the 12 million undocumented out of the country to register for temporary visas. Now, even President Bush has surrendered to reality. "Massive deportation of the people here is unrealistic," he said recently. "It's just not going to work." If the idea of a "path to citizenship" has gained currency, it's possible the unfashionable "A" word may be close behind.

At the very least, it's clear the undocumented have succeeded in surprising officials and wresting control of the debate from hardliners. The enforcement-only bill the House of Representatives passed in December will never become the law of the land. No wall will go up and no mass exodus of the undocumented will ensue. Instead, Congress will work out a compromise -- now or after the November elections.

But look closely. The unusual composition of the demonstrations promises more than better immigration legislation. The undocumented and their allies on the nation's streets come from a sector rarely seen at public protests: the working poor. It's hard to remember a time when protest came from such modest ranks.

Listening to them talk, it was hard to miss hearing the sounds of an incipient labor movement.

Juan Gil, a 33-year-old janitor from Puebla, Mexico, who spent Monday at the protests in San Francisco, said that being undocumented used to be "taboo." Now, he talked about making this a better country, a better world. "I don't feel alone anymore," he said. And he isn't. Immigrant after immigrant spoke of how uplifting it felt to be part of a group. Their immediate concern was legalization, but fast behind came talk of jobs and earning a good enough living to educate their children.

Just as the strength of labor at the turn of the century came from the ranks of new Americans who refused to accept the lousy wages and working conditions employers had long offered, today's immigrants are already wise to the ways of their new homeland. Collective action has improved their possibilities in congressional debate on immigration, and they are unlikely to forget that lesson soon.

And neither are employers. As Economic Roundtable president Daniel Flaming told the Los Angeles Times, "This was a reality check. You can't wish away these workers. They are rooted in the community. Not everyone realized that before." But employers already do. So rather than the firings predicted by some, many businesses closed their doors -- either to avoid a showdown or to openly show their support.

Some in organized labor understand the leverage in this mutual dependence. The Service Employees International Union has succeeded in enrolling thousands of janitors and service workers in California and Florida. Many are documented, Eliseo Medina, the union's vice president, said at an informal meeting of Mexican and U.S. congressmen in February. At that time, he called the battle for immigration reform "a real dog fight." But in the next month, the organizing the union had done in Chicago, Florida and New York began to pay off as the Roman Catholic Church and the Spanish-language media joined in.

Since then, the ambient noise of mean-spirited immigrant bashers has been drowned out by feel-good chants and rallies too loud and too big to ignore. And even if many of those who marched on Monday won't vote for years, their allies will. Rosario Martinez, a 57-year-old registered nurse and her 28-year-old daughter Ingrid, who works in banking, offer a case in point. "They are not criminals," Mrs. Martinez said of her fellow demonstrators. She and her daughter are watching to see how their elected officials respond. Gov. Arnold Schwarzenegger, leery of such voters, has already retreated from his earlier praise of the Minutemen.

Yes, talk of a backlash is already rising, but the numbers fail to add up. The Los Angeles Times reported that 400 new volunteers joined the Minutemen in the week following the March demonstration of 500,000 immigrants in Los Angeles. But after Monday's march of more than a million undocumented and their allies across the country, a mobilization of 1,000 or even 5,000 Minutemen seems pathetically quaint.