I wrote a memoir about life with the world's worst dog. But before my masterpiece hit the shelves, a pooch named Marley stole my thunder. 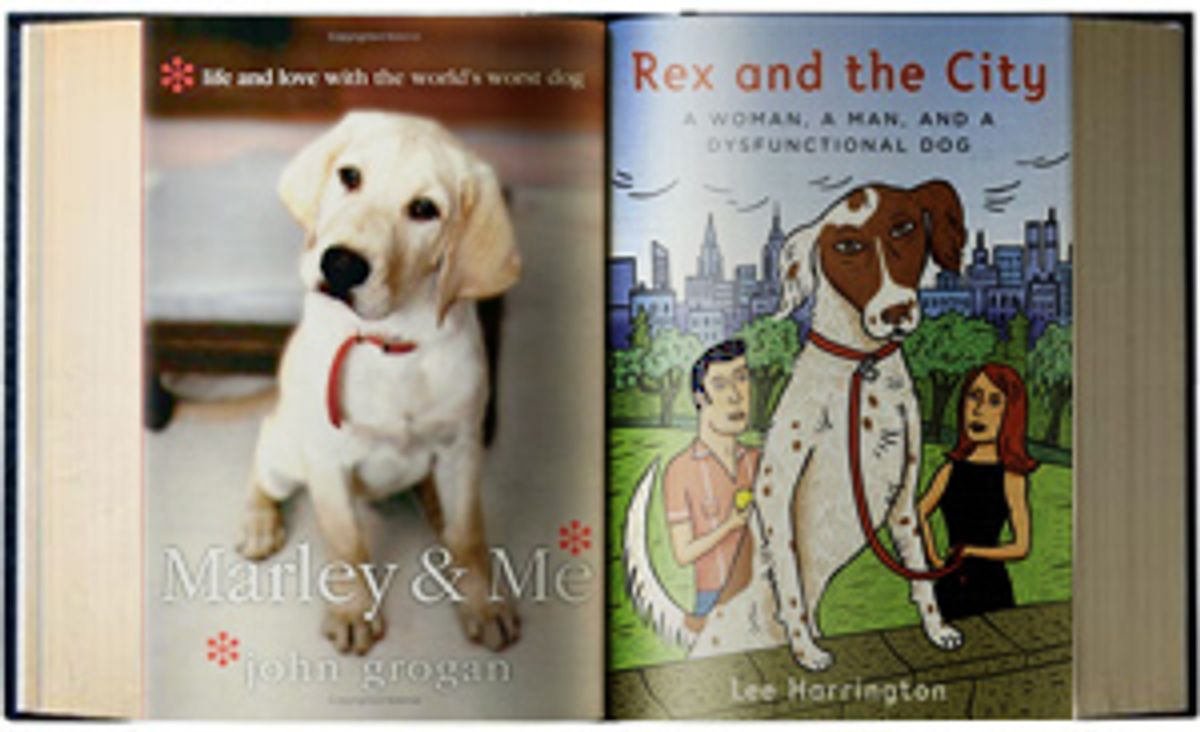 I spent five years working on and agonizing over my first book. And when I finally finished it, I congratulated myself not only for being done, but for producing a work that I thought was truly original, something the reading public had never seen before. I started fantasizing about crowds showing up at my book signings, interviews with Katie and Matt, and enormous royalty checks.

Then four months before my book was due to publish, another book came out, one that had almost the exact same premise as the one I had just written. Both are memoirs about life with the world's worst dog. As I handed in the final draft to my editor, rave reviews of the other book appeared in Publisher's Weekly and the New York Times. While I was hunkered down in the first stages of copy edits, the other book hit the bestseller list and the author appeared on CNN. On the very day I approved the final pass of my copy-edited draft, I poured myself a celebratory glass of wine and turned on the radio and heard a well-known broadcaster interviewing the other author, asking him to explain the sensation his book has created. How is it possible, she asked -- with uncharacteristic flirtatiousness -- to sell so many copies of a book about a dog?

At that point, the wine tasted so bitter my cheeks puckered.

The other book is "Marley & Me: Life and Love with the World's Worst Dog" by John Grogan. It is a memoir about the author, his wife and his unruly dog, a Labrador retriever named Marley. If you have not heard of this book, perhaps you have been hiding in a cave in Afghanistan. It is there, front and center, as you enter any Barnes & Noble in any of the 50 states. Marley is mentioned in newspapers, magazines, television shows and radio programs virtually every day. I know this not because I am reading the papers or watching television -- I cannot bear to do so any longer. No, I know about Marley because my ex-husband, who works at a news network, keeps sending me e-mail announcements about the book every day. Even though I have asked him not to. Or perhaps because I asked him not to.

You see, he is in my book, my ex-husband. Because I, too, have written a memoir about myself, my ex-husband, who at the time of the story wasn't even my husband yet, and our unruly dog. My book is called "Rex and the City," and it hit the shelves a few weeks ago. Or perhaps "hit" is not the right word. Perhaps, in the wake of Marley, my book will simply float behind, bobbing up and down like a seagull waiting for scraps.

My memoir is a chronicle of my then-boyfriend's and my adventures after we impulsively adopted a shelter dog. We didn't know anything about dogs at the time, and ours had been abused and abandoned, and trusted no one. When we brought him into our 300-square-foot apartment on the Lower East Side all hell broke loose. He growled at us. He tried to bite us. He was impossible to walk and he kept trying to escape. Three times, he actually did get out -- once right on Rivington Street -- and twice was almost killed.

So our relationship went into crisis mode. We had almost broken up nine months before we got the dog, because we felt we just couldn't commit to one another; now, logic told us to bring the dog back to the pound, to resume our old lives. But in spite of all that pain and trouble -- or maybe because of it -- our hearts told us to keep Rex. Indeed, eventually, through a lot of hard work, love and devotion, we turned our canine catastrophe into a cuddle muffin.

Now, I know this is not the first time in publishing history that one book has one-upped another by a matter of months. Right now, for example, there are two books out about the competitive eating circuit. And I know, because my publicist, agent and editor keep telling me, that the phenomenal success of Marley could work to my advantage. It means people buy books about couples with dogs, they say.

I started writing "Rex and the City" back in the summer of 2000, as a serial column for Bark magazine. The series took readers through our ordeals with Rex, moment by moment, and from the start it was popular and reached an intelligent, dog-loving audience. I was content with its success. Eventually the editor of Bark encouraged me to publish my columns in book form, and I had enough material at that point to do so. But when I approached my agent, she wasn't confident it was the kind of story that would sell. "People just aren't buying books about dogs," she said. And because I trusted her, and because I really didn't have much faith in myself as I writer, I abandoned the idea.

Meanwhile, my editor at Bark was e-mailing me constantly, warning me about the dozens of dog memoirs that arrived on her desk daily for review. She reminded me that my book -- ahem -- "stood out from the pack" because it would be the first dog memoir written about a couple with a dog, not an individual. Not only that, she said mine was the only one about an ill-behaved dog. "You must sell your book now!" she ended each e-mail.

Eventually, exasperated with my inaction, my editor at Bark contacted a book editor herself, and gave that editor my name and some copies of my columns. And what do you know? I got an offer. The contracts were signed a few weeks later and I had myself a book with a due date of spring 2005. Wanting to focus solely on my own work, I asked the editor at Bark not to send me any more e-mails about dog books until I had completed mine. And so, Marley crept up unawares.

In August of 2005 I was in France, researching a new novel, when a friend whose first book had sold only 4,000 copies called to say she had some bad news. I thought she was calling to tell me her grandfather had died, but the news was about Marley. "I thought you should know," she said, "in case you don't want to come back."

Should I be afraid?" I asked her.

"Be very afraid," she said.

At that moment, a dreadful feeling began brewing in my gut and has remained there ever since. Doubt. Self-flagellation. Regret. I tried not to tear out my hair like a wailing Italian grandmother at a funeral.

Still, I am always trying to see the positive side of the situation. I had a writing professor in grad school who said there was no such thing as an original story. She told us everything was covered before the birth of Christ, by the Greeks. But there is such thing as an original experience, she told us. Now, I try to remind myself that it is true. Grogan and I have told a similar story, but our experiences are completely different. He and his wife got along; my boyfriend and I did not. His dog was sweet; mine, at the beginning, was not, (but we loved him madly regardless). No two people can ever have the same exact experience; nor can two dogs. (And by the way, my dog was much worse than Marley. Much, much worse. Marley tipped over trash cans. My dog killed sentient beings -- birds, amphibians and mammals I don't want to name. Frankly, my dog could have kicked Marley's ass.)

But I am not one of those writers who begrudges another writer's success, especially when he's written a good book. I'd like to believe there is enough room for all of us. And each time a book hits the bestseller list, well, that should assure all writers that people are still reading books. As for me, I say hats off to John Grogan. He has succeeded grandly, all for the love of a dog.

But still: Being scooped sucks.

In my better moments, I recognize that it does not serve anyone -- not me, not John Grogan, not my editor, or my agent -- to berate myself every day about not getting my book out before Marley. This is just how life is. I don't have to attach any moral significance to it. I am not being punished by God for being a bad person. I don't have to wish every hour that I could go back in time and turn my book in years ago, when Marley was still a pup.

I didn't. John Grogan did. End of story.

Mr. Grogan has a popular Web site on which he invites fans to share their own stories of their unruly dogs. Hundreds have written in with charming tales about dogs that chew on shoes and overturn trash cans, dogs that won't come back when they are called and dogs that pee on floors. Soon I am going to submit my own posting to Mr. Grogan's Web site. I will tell him the story of my terrible, lovable dog. It will be 265 pages long.

Lee Harringtons book Rex and the City, was published by Random House in April 2006. She lives in New York City with her second dog, Chlotilde.