Lefty bloggers are livid over green groups' endorsement of Republican Sen. Lincoln Chafee. But who says only Democrats can save the planet? 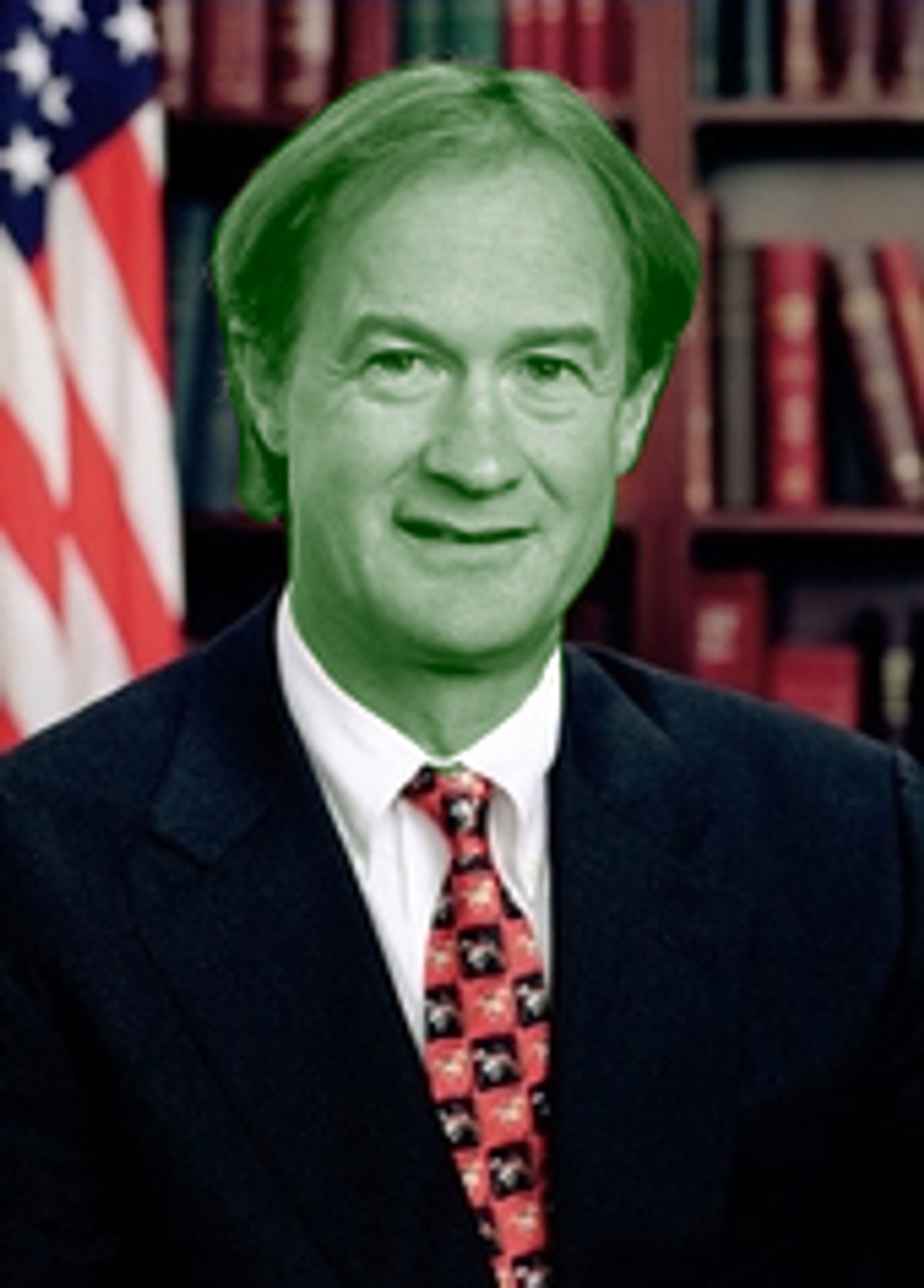 The reelection campaign of Rhode Island Sen. Lincoln Chafee, widely considered one of the most vulnerable Republicans in Congress this year, has prompted a verbal blitzkrieg from progressive activists -- not aimed at the candidate, but at the Sierra Club and League of Conservation Voters, two green groups that have endorsed him.

"This may very well be the most moronic move by any organization this election cycle," seethed Markos Moulitsas Zzniga (aka Kos), godfather of the influential liberal blog Daily Kos, in an April 19 post, referring to the Sierra Club's plans to stump for the moderate Republican. He followed it up with a post last week on the league's endorsement: "LCV joins the loser's circle."

Sierra Club executive director Carl Pope explained the group's move on his blog and on the Huffington Post. "We need more Republicans like Sen. Chafee and we will continue to praise those who, like him, stand up for the environment," he wrote.

But, like Kos, Sierra Club members went into virtual revolt. "What idiocy! You should be ashamed," one commented on Pope's blog. "I've been a member of the Sierra Club for a decade but I will never give you money again," wrote another. Nor did Pope get much sympathy from commenters on Grist's Gristmill, or on the progressive blog Firedoglake, where the Sierra Club was dubbed "Wanker of the Day."

Some of the critics contend that Chafee's environmental record doesn't warrant support from green groups. That argument got a boost last week when the senator cast a deciding committee vote in favor of confirming Bill Wehrum as assistant EPA administrator for air and radiation. The nomination of Wehrum -- a utility lobbyist before he came to the EPA, where he's been an architect of Bush's Clear Skies legislation and controversial rules on mercury and new-source review -- will now go before the full Senate for a vote. Chafee has said in the past that he believes Congress should interfere with presidential nominations only in extraordinary circumstances, but many enviros would argue that selecting an industry lobbyist to determine air policy fits that bill.

Kos seized on the vote to support his contention that "even the most rational argument in favor of the LCV and Sierra Club endorsements didn't hold up to reality."

But even before the Wehrum vote, Kos accused the Sierra Club of overlooking Chafee's environmental record: "And how was [Chafee's] 20 percent rating?" he taunted. "That's all it takes to get an endorsement these days? Are you really that easy?"

It's true that the Sierra Club essentially gave Chafee a 20 percent rating in 2004 based on five particular votes deemed important that year, two of them on whether to cut off debate on judicial nominees the Sierra Club opposed. But this 2004 vote tally -- which the Sierra Club says was not a scorecard -- was a marked departure from Chafee's otherwise solid environmental record. He got a 90 percent voting score from LCV last year, and has a respectable lifetime voting score of 78 percent.

Chafee was, for example, the only Republican committee member to oppose the Bush administration's Clear Skies initiative, providing the instrumental vote that prevented the bill from going before the full Senate, where it was expected to pass. He has also played a key role in the fight to protect the Arctic National Wildlife Refuge from drilling. "He was an absolutely crucial vote on ANWR," said Pope. "Without him we would have lost the battle." And as chair of the Fisheries, Wildlife and Water Subcommittee, Chafee has refused to take up a House-passed bill, sponsored by Rep. Richard Pombo, R-Calif., that would dramatically weaken the Endangered Species Act.

"The Clear Skies bill was Bush's top environmental and legislative priority, and Chafee stood his ground," said John Walke, director of the clean-air program at the Natural Resources Defense Council, who has collaborated with Chafee's office on air-policy initiatives. "I can't overstate the kind of courage it took for Chafee to buck the president, buck the committee chairman, buck the party." Walke, like most green activists, could not comment further on the Chafee campaign because his group is constrained by its tax status from endorsing candidates.

The owner of two Toyota Priuses, one in Washington, and one in his home state, Chafee has consistently voted in favor of stronger fuel-economy standards for cars, ambitious targets for renewable-energy production, and mandatory greenhouse-gas regulations. Local enviros also applaud his success in securing federal funds for green initiatives in the state -- brownfields cleanup, water-quality improvements to Narragansett Bay, and expansion of Rhode Island's national wildlife refuges.

Both Steve Laffey, Chafee's opponent in the Republican primary, and Sheldon Whitehouse, the leading candidate in the Democratic primary, are outlining strong environmental platforms, but that's to be expected, given that Rhode Island voters are among the greenest in the nation.

"Linc Chafee has proven himself an environmental hero," Pope said, "and we are not going to dump our heroes overboard." (Pope could not be reached for comment on the Wehrum vote.)

Said Tony Massaro, the League of Conservation Voters' senior vice president for political affairs, "Sen. Chafee is a top environmental leader in Congress, and very deserving of our support."

The most heated debate, though, is not over Chafee's environmental record, but over whether environmental groups should support any Republican at all. Many activists argue that they shouldn't: Given that Dems have a shot (albeit a very long one) at winning back the majority in both houses of Congress in November, and said majority would be the best means of reversing the current GOP-led assault on environmental protections, how can green leaders justify supporting Republican candidates who would impede that transfer of power?

Here's how Kos put it: "Um, guys over at the Sierra Club? Yeah, you, Carl Pope? How has Bill Frist and the Republican Congress been for your agenda? ... [G]ood luck seeing your agenda continue to be demolished by the GOP leadership Chafee will continue to enable."

But Pope rejects the argument that environmentalists must ally themselves with Democrats. "It is absolutely vital that environmentalism be nonpartisan," he said, adding that the focus should be on the long-term goal of breaking down partisan divides on green issues, not sharpening those divides today for near-term gains.

Unsurprisingly, Martha Marks, president of Republicans for Environmental Protection, agrees: "If the environmental community turns its back on Lincoln Chafee, who is one of the strongest environmental leaders of our day -- Democrat or Republican -- then it will have no credibility with any Republicans going forward." She argues that it would be a big mistake for green organizations to alienate moderate Republicans who are trying to steer their party back toward the conservation ethic espoused by leaders from Theodore Roosevelt to Richard Nixon to John Chafee, Lincoln's Senate predecessor and father. "The only time you make any long-term, permanent progress on anything in this country is when you have bipartisan support," she said.

Susan Gobreski, a field director at LCV, sounded a similar note, saying that "a partisan strategy gets you a win 50 percent of the time if you're lucky. Our responsibility is to think about leadership. What's needed if you care about an issue agenda is politicians who will fight to be the person who is doing the best job on an issue. If it's simply about parties, not people, individuals won't have any incentive to break out of the mold, rally support, and create cross-party consensus. Chafee represents the kind of person in both parties that we should all be looking to."

But even with enviros' backing, Chafee faces a brutal reelection campaign. Come November -- or even September, when Rhode Island holds its primary -- we'll find out whether green endorsements can help keep a moderate Republican afloat at a time when moderation has become political deadweight.