After toying with us for months, this show's writers finally gave us a shamefully satisfying season ender. 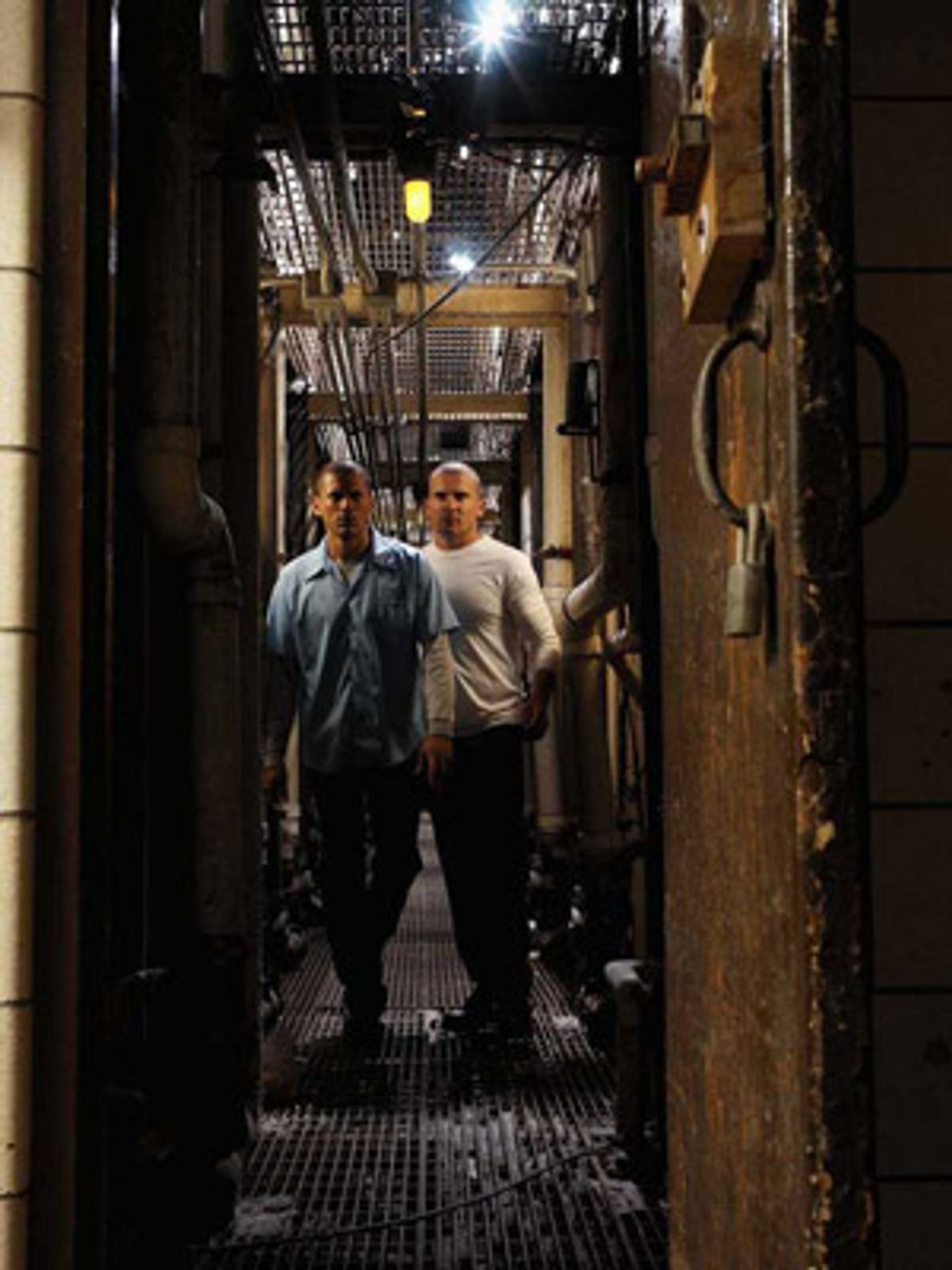 The programming history of "Prison Break" has been almost as tortured as Michael Scofield's elaborate plans to spring his brother Lincoln from the Fox River State Penitentiary. After burning up the ratings and delighting the critics in the fall, the new series took a long, long break, from November to March. Fox even threatened to hold off on starting the season's second leg until May while it juggled the schedules of "24" and "American Idol." But "Prison Break" was a bona fide hit, and these days, who wants to mess with magic that rare?

Finally, Monday night, after almost a year of McGyver-esque ingenuity, cellblock soap opera, nth-hour reprieves and so many revisions to Plan A that Michael was starting to run out of alphabet, Plan Z finally clicked. The cons made it over the wall, leaving behind a dead Westmoreland and a perhaps too abundantly alive Manche. Their cross-country sprint for the airstrip where Abruzzi's plane waited to take them to Mexico took up the entire episode, an old-fashioned, hourlong chase scene that rivaled the most overcaffeinated installments of "24."

Probably at least half of the rush came just from seeing Michael and company get out of that damn prison. Not that "Prison Break" hasn't been endlessly inventive in generating complications in what ought to have been a fairly straightforward escape caper. It took sheer audacity to spin this premise into an ongoing dramatic series, and a good percentage of the show's suspense has come from wondering what the show's creators would come up with next. They tossed out one shamelessly preposterous notion after another, from the blueprints and specs tattooed on Michael's body to the convenient fact that after arranging to be convicted of bank robbery, he just happened to be incarcerated in the same facility as both his brother Lincoln and a useful mobster in desperate need of some information that Michael just happened to have.

Linc (Dominic Purcell), as you know, has been falsely convicted of killing the vice president's brother, instead of being justly nailed for being one of the worst actors on network television. It has been a little hard to root for Michael (played by sly-eyed heartthrob Wentworth Miller) in his quest to stop his brother's execution, because, to paraphrase Dorothy Parker on the demise of Calvin Coolidge, would it really make that much of a difference?

But besides offering a pretext for the whole series, the trumped-up case against Linc has provided some much-needed gusts of the open air, along with a surprisingly intriguing conspiracy. As with "24," it's the supporting characters who make "Prison Break" juicy, from a deliciously steely Patricia Wettig as the scheming V.P. to her ice-blooded henchman, agent Paul Kellerman. Then there's the pitiful death of Sara Tancredi (Sarah Wayne Callie), the season's one genuinely moving moment. If Michael has the overactive conscience of most action heroes, he'll wind up blaming himself for her fate, but unlike most guilt-ridden action heroes, in this case he'll be right.

The guys Inside, it must be said, tend to fall into predictable prison-movie types: the sneering and degenerate but crafty white-trash T-Bag (Robert Knepper); the bullying, corrupt C.O. (Wade Williams), the Mafioso doing a stint for the family (Peter Stormare), the fresh meat (Lane Garrison), etc. The actors gnawed enthusiastically on the bleak scenery, but after 20-some episodes it was all wearing a little thin. So it was shamefully satisfying last night to see T-Bag finally get his grisly comeuppance from Abruzzi (Stormare) after pulling one clever trick too many with those handcuffs. And better still to see Tweener (Garrison) and Haywire (Silas Weir Mitchell) -- the two escapees voted most likely to get caught less than a block from the prison -- glide off into the horizon while the tougher, smarter guys get cornered in a field by a half-dozen cop cars, two helicopters and a vengeful, shotgun-toting Captain Bellick (Williams).

Snippets from next season shown at the end of Monday night's episode suggest that the guys get away somehow, and really, the idea of them all being dragged back to Fox River is intolerable. The unasked question of most prison break movies is how the escapees stay broken out: Where do they hide, how do they rebuild their lives? It's still hard to believe the show's writers can keep this thing going indefinitely, but there's gotta be a least one more cliffhanging year left in "Prison Break." Here's hoping it features a change of scenery.